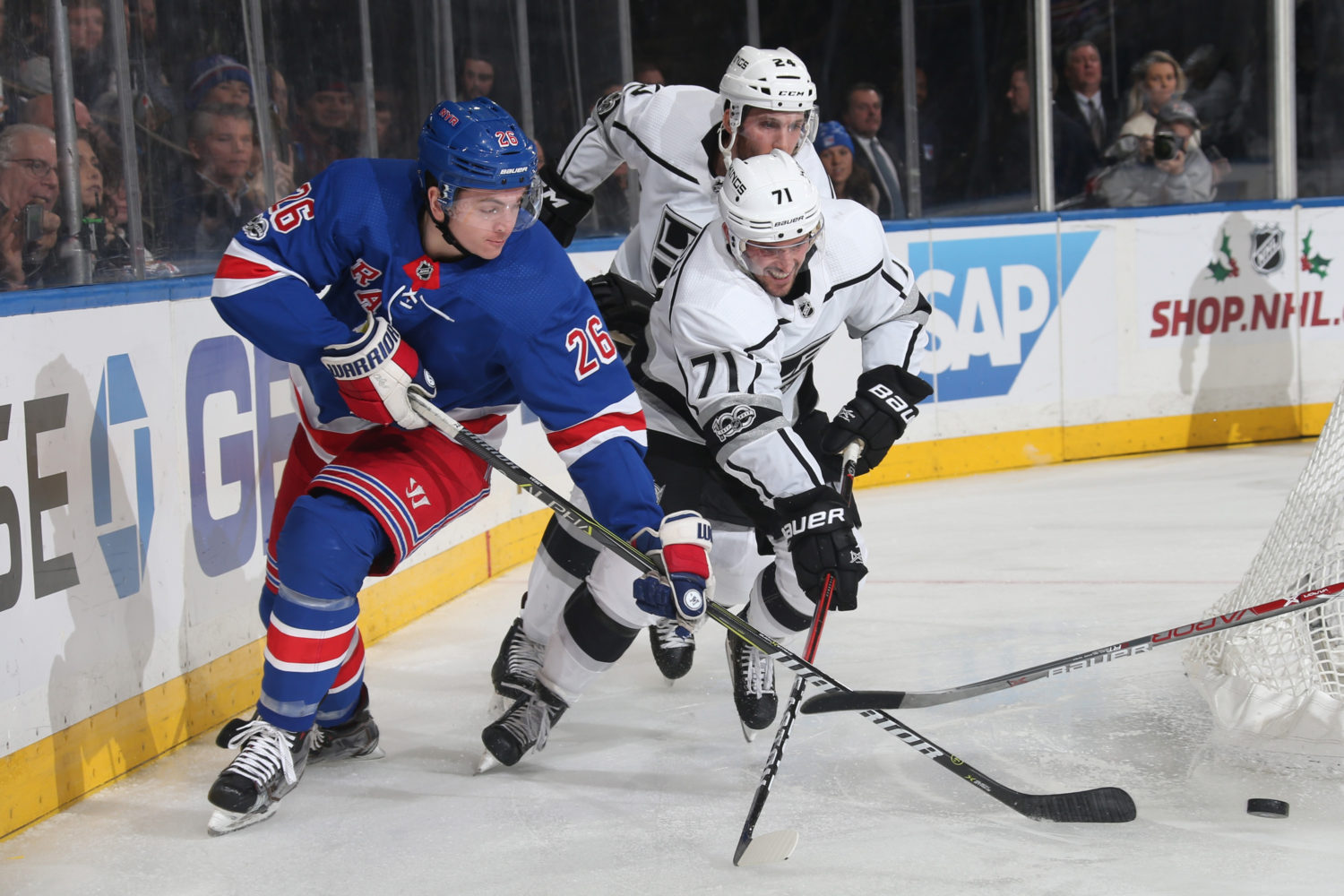 Good evening from San Jose, where the team flight touched down at 3:00 p.m. A very happy holiday weekend to you all, Insiders.

Before the flight, the Kings practiced at Toyota Sports Center at 11:00 a.m. and showed no apparent changes to their recent alignment:

All defensemen were accounted for; a quick glance at defensive pairings did not indicate any changes from the Muzzin-Doughty, MacDermid-Martinez, Forbort-Fantenberg groups used Thursday night.

-It’s not any sort of hot button topic, but I was curious about Tyler Toffoli’s lack of usage on the penalty kill, considering he’s been a regular there in recent seasons and led the NHL with five shorthanded goals in 2014-15. With an average of 38 seconds of shorthanded time per game this season, he ranks eighth among active L.A. forwards, and John Stevens in the past has spoken about the team’s deep pool of penalty killers, and how the Kings are one of the few teams that will regularly rely on four forward pairs. I assumed Toffoli’s decrease in usage – he averaged over a minute of shorthanded time per game in each of the last two seasons, and 59 seconds three seasons ago – was due to the desire to keep him fresh for other game opportunities, and while that’s part of it, there’s a lot more than just that.

“We have lots of confidence in Tyler in all situations,” John Stevens said. “There is a little bit of thought process in having a lefty and a righty together, so Mitchie goes with Tanner. When Jussi was playing, it was Jussi and Tyler, and we’ve had the ability to use eight guys, which we think is a good thing. It’s worked for us all year. If guys get injured, or if the situation calls, like when Jeff Carter goes out, we have guys that have lots of experience in those situations. We only think it’s going to help us down the road. But we’ve got lots of confidence in Tyler. I mean, we’ve used Kopi and Brownie almost exclusively together. We’ve used Shoresy and Lewie almost exclusively together. We’ve tried Tanner and Tyler together. We just liked having a centerman on the ice there, a little more speed. We like them together on a line five-on-five. We haven’t particularly gone with that match-up shorthanded, but we have full confidence in Tyler. I think it just might be more that he needs situational time on the power play probably ahead of some of those guys, so we’re just trying to even out the minutes a little bit with that, but we have full confidence using them in those situations.”

Los Angeles’ streak of allowing power play goals in six consecutive games ended in Thursday’s 2-1 overtime win. They still lead the league with an 86.8% mark, which means that tomorrow’s game at SAP Center will be a match-up of the league’s top two kills. Toffoli, meanwhile, has already equaled last year’s output with 16 goals through his first 36 games.

-The United States is in action against Sweden in their final pre-World Junior Championship tune-up, which pits defensive prospects Mikey Anderson (4th/2017), 18, and Jacob Moverare (4th/2016), 19, against each other in an exhibition setting.

All signs some six weeks ago had pointed to Anderson making a deep USA team, and given his competitiveness and lightning-quick decision-making, should still be one of the final 22 players named to the Americans’ roster. 19-year-old Penn State defenseman Cole Hults (5th/2017) played his way into consideration but was cut from the U.S. team earlier in the week.

Kale Clague (2nd/2016), who has 10 goals and 47 points in 28 games with the Brandon Wheat Kings, was already named to Canada’s roster and is in position to emerge as one of the tournament’s elite defensemen. In a World Juniors mailbag ($), Corey Pronman wrote that Clague “could be Canada’s best defenseman and make a name for himself in the prospect world other than by the many jokes we make off his first name.” Speaking of which, he had most recently been paired with Colorado’s Cale Makar, giving Canada a potential Kale-Cale top pairing. The Kings tabbed the 2016 draft, in which they had only four selections, as a “take your medicine” type draft. Perhaps they’ll be able to force down some leafy greens, too.

Here's how #TeamUSA will line up tonight against Sweden in its final #WorldJuniors pre-tournament game. #USAWJC 🇺🇸

-The Sharks, who beat the Canucks, 5-4, in overtime on Thursday, will continue to be without Logan Couture. The high-scoring center suffered a concussion on December 15 and skated for the first time since his injury earlier today but considers himself to be “a long ways away.”

Via Curtis Pashelka of the Bay Area News Group:

“There’s a lot of stuff that has to happen to come back. You can’t just skate and then say you’re fine,” Couture said.”

Via Pashelka, defenseman Paul Martin (ankle), who has been limited to three games this season, will play the final game of a conditioning assignment with the San Jose Barracuda tonight, while forward Barclay Goodrow (lower-body) could return to full practice after the holiday break.

-Meanwhile, there’s a former Shark on the Kings who will be representing Southern California for the first time in the intra-state rivalry.

“Super excited. We’ll see how it goes,” Torrey Mitchell said. “I’ve played against them quite a bit over the years, so that’s kind of behind me, but it’ll be a little weird.”

Mitchell, selected by the Sharks in the fourth round of the 2004 NHL Draft, will play his 14th career game against San Jose. A member of the Sharks 2010-11 squad that defeated the Kings in the first round, he played his last game with the club that drafted him in the first round of the 2012 Stanley Cup Playoffs, when San Jose won Game 1 but was eliminated by St. Louis in five games.

He’s well removed from his Northern Californian tenure, but not to the point that returning to face his original team is meaningless.

“Doug Wilson drafted me, the core guys are still there from when I started in 2007,” he said. “It’s a little awkward, but it’s hockey. I’ve been traded before.”

As for the here-and-now, he’s helped solidify the team’s depth with good speed, checking and responsibility in defensive situations, including the penalty kill. He also has two goals and four points in his last five games, and helped turn a tide of momentum by getting in on the forecheck and establishing zone time before finding Alec Martinez for the game-tying goal midway through the third period in Thursday’s overtime win.

“It felt good,” he said. “We were just grinding down low, and sort of a floater on net, and it was nice that it went in. It changed the momentum of the game, for sure.”

That shift was essentially a case study of what his M.O. is on this team.

“I think I play to our team identity, and that’s speed and being good on the forecheck and being responsible, so we’ve been trying to do that, especially on the fourth line,” he said. “Keep it simple and try to spend time on their end and try to change the momentum of the game.”

Los Angeles’ center depth has moved a player or two up a rung in Jeff Carter’s absence, but Mitchell has been a net positive in establishing continuous lineup structure. He’s also won 60.9% of his faceoffs since his visa cleared.

“He’s been good,” John Stevens said. “Just starting in the faceoff circle, a lot of times we tell young players that if you want more ice time and you’re a centerman, you’ve got to be proficient in the faceoff circle, so that’s been a big help. He’s got good speed in the middle of the ice, he supports the puck from underneath, and he understands his role on the hockey team, which is a really important thing. Some guys don’t embrace their role; he does. He’s good at it. He’s good on faceoffs. He’s a detail guy, and he’s been a good addition.”

-One more Dustin Brown quote that wasn’t fully used in yesterday’s feature, which I hope you’ll take the time to read. It’s about rooming with Drew Doughty on the road.

“I always looked at Dewey as a little brother, really. Just made sure he had my coffee in the morning. Gave him a little bit of responsibility, but it was just about having fun, really. He was a young kid. Obviously a really good player. He probably didn’t realize how good he was, which was a good thing. It takes a lot to learn what it takes. I’m still learning. 33. 1,000 games. I’ll probably learn something new [Thursday] night. … It’s one of those things where you just try to help the young guys out as you can, and being in a room on the road, you have a lot of time to talk and sift through things. There were probably a lot more comical moments than serious moments or me taking care of him. It was more just us saying stupid things to each other and laughing about it. But I think it goes a long way. Again, I keep on coming back to a group, right? We’ve had a strong group here for a long time.”

The NHL Holiday Roster Freeze officially goes into effect tonight across the league at 11:59pm local time, and is lifted on December 28 at 12:01am local time.

What does that mean?

Here is a high level breakdown of all the key points to remember. pic.twitter.com/UdmT6OLjE3