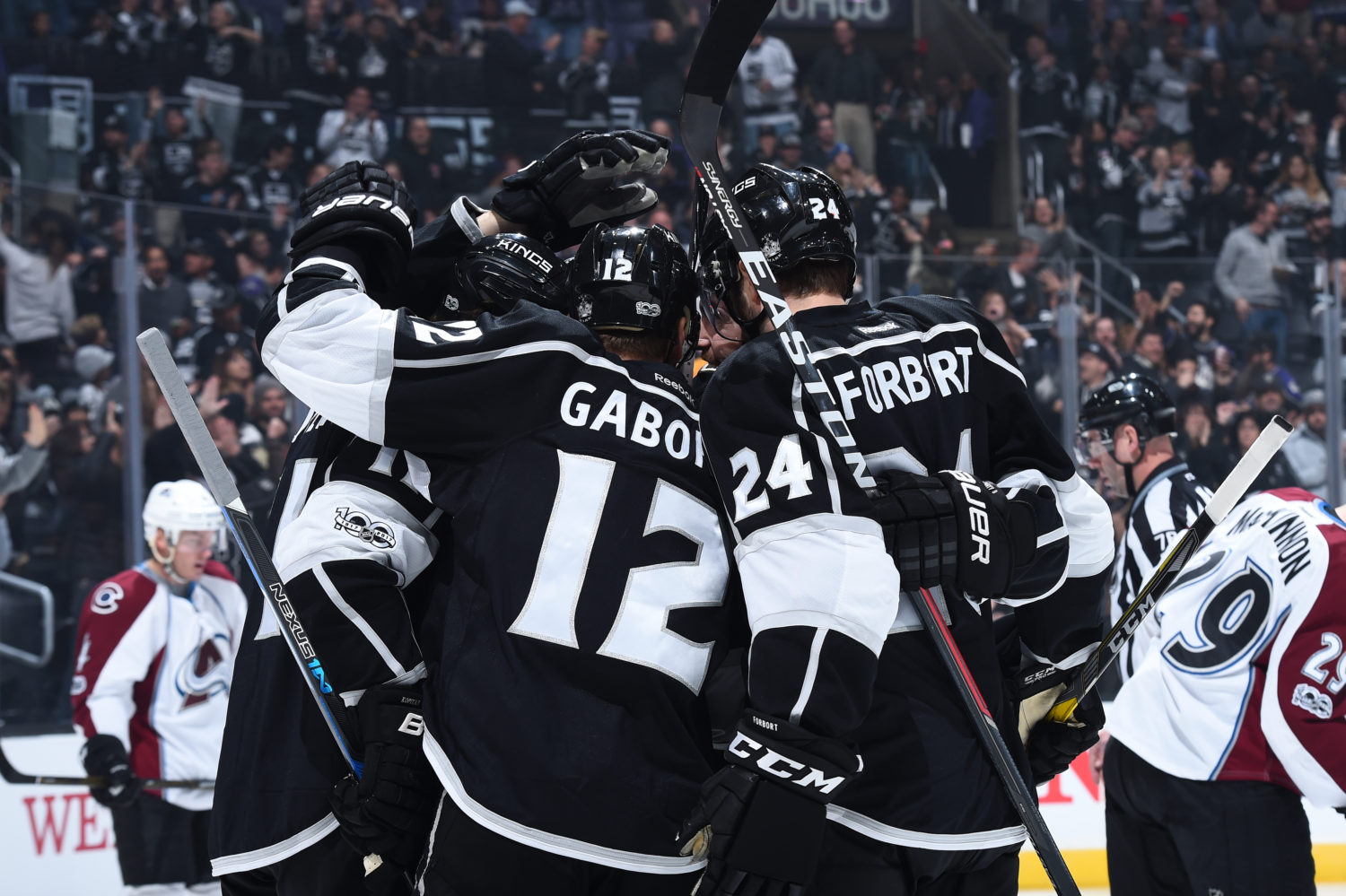 On Dustin Brown playing in his 1,000th game tonight:
I think it’s impressive. To Brownie’s credit, he came in as a young guy. The team was not having a lot of success. I think they put a lot of responsibility on him as a young player, and I think he’s seen the good, the bad and the ugly here through his career. There’s a lot of persistence and perseverance from him, and I said this before: 1,00 games within the same organization, and a guy who plays the game really hard. He’s a physical player, he plays the game hard, he plays every night, he plays when he’s not 100%. It’s impressive, and when you think of the LA Kings in today’s game, you think of Dustin Brown. I think he’s a huge part of the identity of the organization.

On whether it’s more difficult for defensemen than forwards to lock down regular NHL spots:
Well, there’s six defensemen and 12 forwards. Eight wingers. I don’t know. [Oscar Fantenberg] earned a spot on our team. We liked what we saw in the preseason. You’d like your team to stay healthy as much as they can. Marty was out early in the year, so it created an opportunity for someone to go in. I don’t know. With the schedule the way it is, we’ve tried to really take advantage of really having healthy players. If somebody’s banged up or somebody falls off just a little bit in performance, I think it’s good to have guys ready to go in. So, I don’t know if it’s necessarily harder, but I think the philosophy is the same in terms of getting in, being consistent. Play to your identity, play hard, being prepared – I don’t think that changes. [Reporter: For what Fantenberg is doing, is this kind of typical of what a young defenseman goes through as far as trying to find consistency?] I think any young player that comes into the league, there’s a process you go through where you’re trying to get established in the league, and then you kind of have an identity where you know exactly what you’re getting. Sometimes, you take older guys out or guys that are established just because you want a different player in the lineup, but sometimes young guys come out just because the inconsistencies in their game. I think it’s a process we’ve seen with all our young players, and some really good young players, where you really like what you see at certain times, but maybe the consistency isn’t there based on schedule, fatigue, whatever. But I think the biggest thing is good players have consistency and good teams have consistency, and good players have an identity and good teams have an identity. That part’s the same.

On whether it’s important to head into the Christmas break with momentum:
Well, it’s always better. Our business revolves around success- [Reporter: I know it’s a hard question.] No, but I think even the flight home from Philadelphia after a win is much more enjoyable than a flight home after a loss. A day in between games is much more enjoyable after a win than it is after a loss, and you’d hope it would be. I mean, it just shows you that your people care and that winning and losing matters, but we’ve really looked at this stretch as a segment. You’ve got a conference game with Colorado and four straight division games. It might be the most important five games of the year. The break happens to be in the middle of that. I think the break sets up for us pretty good where we had two days coming off the road where you get a chance to get your feet on the ground, get some energy back to play two games before the break. We get a day to practice before we play again and go back on the road after that game against Vegas. I actually think the break sets up pretty good for us. It is the break, so it’s something you’ve got to be aware of, but for us, it’s more focused on the segment – on what’s involved in the segment, who we’re playing.

On a first game after a trip, and whether any pitfalls are “counteracted” by Brown’s milestone:
I don’t know if it ‘counteracts’ it. I think those things can be a distraction sometimes, but in Brownie’s case – and he’d be the first to try and deflect any of that praise and accolades – he just wants to just move on, and he’d be worried about playing a game. It’s an impressive milestone, but I think coming off the road and only having one day to regroup is difficult. Coming off the road with two days in between, I think, is a little more ideal. You get a chance to just get some rest. A lot of it’s just taking care of personal stuff at home, right? Young guys do some laundry and get some food in the house, maybe finish up some Christmas shopping, and then yesterday was more about practice and getting ready to play again. It sounds crazy, but if you don’t have a day in between, you feel rushed. You almost feel like you don’t have a chance to get your feet on the ground. You’re trying to get adjusted to the three-hour time change, and then boom, you’ve got to go play again. I really think that extra day is important when you come off trips like that. Hopefully it translates for us, but I thought the team had really good energy yesterday in practice. I thought they had good energy today, and that’s what we were hoping for with the day of rest.

On whether he did laundry yesterday:
I did. That’s all I did. My wife set it down. Two weeks on the road and getting ready to go back out again. I was a little bit domesticated for a day.