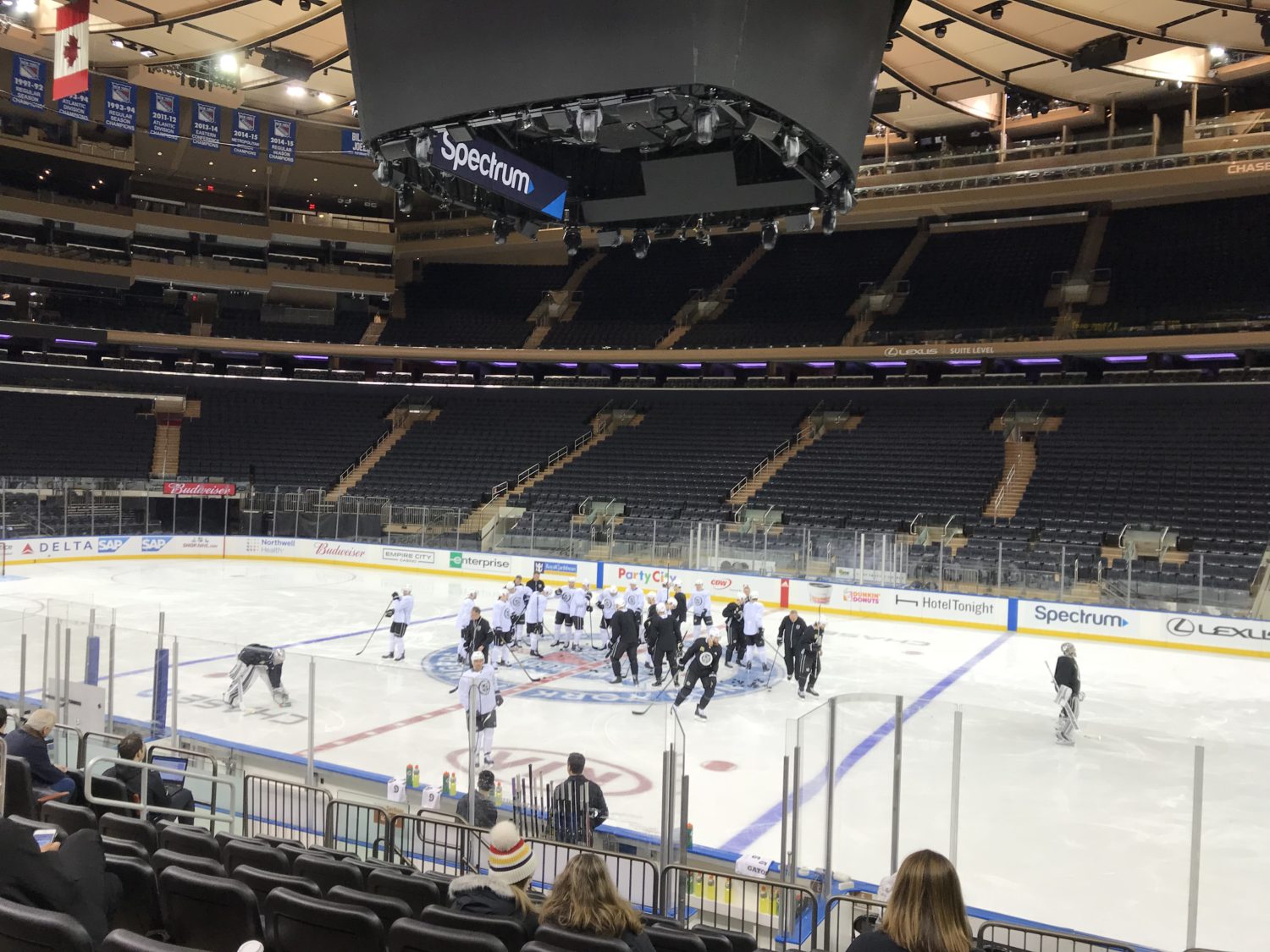 Good afternoon from Midtown Manhattan, Insiders. The Kings practiced at Madison Square Garden earlier this morning and aligned as such:

-Jonathan Quick left the ice first at the morning skate, and technically the #LAKingsGoalieTweetOff applies because this is the first night of a back-to-back, but did you not expect Quick to start at Madison Square Garden? Tonight should mark his first game at the Garden since late in the 2014-15 season, when he stopped 34-of-36 shots in Los Angeles’ 4-2 Cup Final rematch against New York on March 24, 2015. Peter Budaj made his lone 2015-16 appearance in an overtime win the following year, and Jeff Zatkoff drew the start last season. Quick is 4-3-0 with a 2.43 goals-against average and a .907 save percentage against the Rangers in his career, but those numbers don’t take into account what he meant to the team in the first period in Game 3 of the 2014 Stanley Cup Final. This is a building he enjoys playing in.

-Based on line rushes, extras are expected to be Andy Andreoff, Jonny Brodzinski and Oscar Fantenberg. That means we’re likely to see the reunion of the Clifford-Shore-Lewis line that had been a constant nuisance to opposing teams during the preseason and the first two and a half games of the regular season prior to Kyle Clifford’s upper-body injury.

“We were just reading off each other,” Clifford said. “We kind of play our game and we all kind of bring a little something different, but at the same time we all play the same style of game. We keep it simple, we get pucks to the net, forecheck hard and we’re disciplined through our checking.”

Of course, there is the advice to Try Not To Get Attached To Lines because they’re rarely static (with the exception coming when all three players’ numbers are in the 70’s and they’re keeping the puck on a string and away from the Chicago Blackhawks in a Western Conference Finals playoff series).

“I think guys are comfortable in this room playing with anybody. It doesn’t matter who you’re with,” Nick Shore said. “I’ve always said you’ve got to learn and know different guys tendencies more and more, so you’ve got to be comfortable with that.”

-Tonight’s game follows a five-day stretch in which Los Angeles played one game and practiced two times. That gave the team a needed break after a breakneck pace of games, the last eight of which they won, prior to the New Jersey game. They also traveled to the East Coast twice over the compacted stretch.

“We’ve still got to understand that we’re coming off an extremely difficult stretch of games here,” John Stevens said. “We’ve played 15 games in 28 days, and that’s both physically and mentally tough on the players, and I just thought with the two days in between and coming back into a three-games-in-four-nights, it’s really important that we got them reset physically and mentally. Hopefully we were able to do that. We had a good day outside there. We had a really good workout day yesterday, had a good, crisp skate this morning, so I just think the energy level of the hockey team, just getting refreshed both from a physical standpoint and a mental standpoint is good for the team. It allows us to do a little bit of a review, and then get reset to go again.”

With one game in five days, was there anything in particular that the coaching staff focused on?

“Not really,” Stevens said. “I mean, we have lots of coaches now, and we get to the information pretty quickly. It just maybe allows you to touch base with individuals a little more. But whether we play the next day, a day in between, two days in between, we get to the root of the matter pretty quickly and try to address things in a pretty quick manner, and then it might give you an opportunity to touch base with individuals a little more than you do when you’re playing every day.”

Tonight’s game will serve as the ultimate judge, but the recently relaxed schedule did allow the team the necessary breather, which, as Dustin Brown noted, was more about refilling the emotional reservoir than it was about resting any sore bones some 30-plus games in.

“It’s just about getting better,” he said. “We weren’t very good in Jersey. Having two days off felt like we haven’t played in a week, though. We’ve been playing every other day for a month. I think it was good for us mentally, and now you’ve got to prepare yourself to play a really good game on the road against a good team.”

The team held an off-ice workout instead of a practice on Thursday, which was taken advantage of by the players. There were no buses to the rink, no skates to change into.

“We hit all the muscle groups that we use in hockey,” Clifford said. “It’s almost the same. It’s the closest you’re going to get without practicing. The trainers do a good job getting us ready and getting us prepared physically.”

It sounds silly, because these are well compensated athletes playing a game they love, but over 82 games played in six months plus one week, these rest periods are so necessary. With that in mind, is it possible for a morning skate in advance of a game to replicate the types of systems-instilling practices that are more prevalent early in the season?

Stevens worked as an assistant under both Darryl Sutter and Terry Murray – and credited both, along with Dean Lombardi, when asked about his evolution in coaching earlier this morning. But as a player who has played through six different coaches (Andy Murray, John Torchetti, Marc Crawford, Terry Murray, Darryl Sutter and John Stevens), Brown was asked whether there’s any noticeable difference between the way Sutter and Stevens schedule balance their practices with rest.

“It’s very similar,” he said. “It’s also we’re [32] games in. The important rest is in the second half of the year. Not that we don’t need it now – we’ve played a lot of hockey in the last month or so – but the majority of the time we get what we need, and there are different scenarios for different players. Johnny’s been great with it. Darryl probably even gave us more rest, you know? We didn’t go on the ice as much, but as a player, I don’t mind on the ice, off the ice, it’s kind of just getting what you need personally to make yourself ready to go.”

It should make for a very interesting match-up tonight. The Kings traditionally produced good efforts at Madison Square Garden under Sutter, going 3-1-0 in the regular season and 1-1 in the playoffs, with strong performances marking both losses.

-I’ll have more from the rink later tonight on Marian Gaborik, who is slated to play in his 1,000th game. But, one more tease of a quote, this time from Gabby himself, when asked whether he imagined that he’d play 1,000 games in the NHL:

“Honestly, I never thought about it, even when it was getting closer and closer. It was in the back of my head, but I was never really thinking about that. But, here we are. The time flies pretty quickly. I experienced great years in Minnesota, obviously four unbelievable years here, a short stop in Columbus, and then here, winning a Cup, it’s definitely a dream come true, and playing [my] 1,000th game in the Garden, it makes it even more special.”