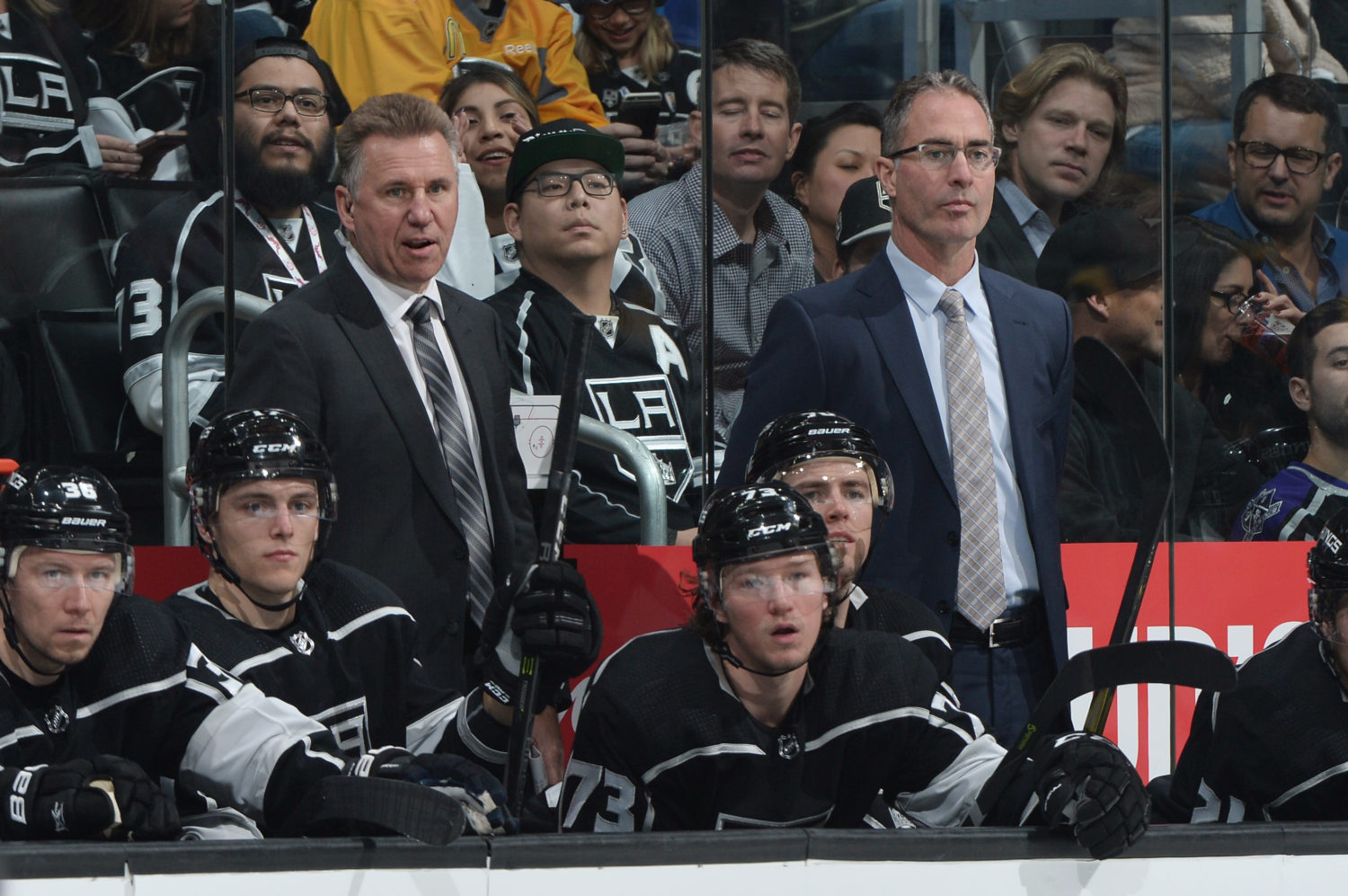 On what can be cleaned up after Tuesday’s loss:
I think we’re reading what a lot of other teams are saying right now. You’ve got to manage the puck better. I thought New Jersey – and they checked really well, you’ve got to give them credit – but we had opportunities to one, either put a puck to the net, or two, put a puck in behind them, because they had such good gaps in neutral and we turned pucks over that only led to the puck coming back to our end and not enough pucks going into their end. We did get pucks deep and we created stuff, but it just wasn’t near often enough.

On whether he watches tape on “outlier” games such as Tuesday’s, or whether he just moves past them:
I think you can always learn from it. I mean, there are things in the game where we know most of the time it reinforces what you already feel. [inaudible] … You have analytics that tell you where the puck was, where things happened, where shots came from, when guys are on the ice. Most of the time, I’d say 90% of the time, it just confirms what you already know, but today, players are very visual, and i think if you can show them a clip, you know, we’ve got to play Jersey again. You’ve got to get a read on them next time. It’s a good reference point next time we play them, so I think you can always learn from it. I enjoy studying the game. Players enjoy studying the game. I think its just a good opportunity to learn why you had success and learn maybe why you didn’t have as much success.

On whether he has gotten the team more “relaxed”:
I don’t think that’s the right term, ‘relaxed.’ I think this team has come in extremely committed. We have leaned on our leadership group a lot to carry the message with the hockey team. You can paint whatever picture you want to paint. I think the fact that we had success early with real good spirit on our team, and when your team’s winning, it’s pretty easy to feel good about yourself. And then we went through a stretch where we lost a few games and the mood was pretty somber around the rink. I think success and failure breed a lot of that, but I think for the most part we’ve tried to get the leadership group to take some big responsibility in the locker room, and I think they’ve done a good job with it.

On whether he is “different” as a head coach now, compared to his time in Philadelphia:
Different – is that a good or a bad term? [laughs] [Reporter: You tell me.] I think every coach, if you see the most senior coaches in the league, whether you’re talking about Hitch or Joel Quenneville or Trotzy and those guys, I think they would all agree they’ve gotten better as coaches, and I’m no different. I think I know the league a lot better now than I used to, certainly having spent time out west. I think I know the schedule a lot better than I used to in terms of managing rest and work, and I think that’s something that you have to learn coming from any other league then the NHL, because the schedule is so different. And I just think the communication with the players is something that I think as coaches, the more time you’re in the business, the better handle you get on that. And I’ve always loved the game of coaching. I think I’ve always been a good student of it, but you say, ‘what is experience?’ I know the league, I know the players in the league, I know what to expect, I understand the travel now, how important the rest is and how important it is to pick the right points to get your work in.

On what he has learned, going back to his tenure as an assistant with Terry Murray and Darryl Sutter:
Well, they’re two great guys. And throw Dean in there, too, right? They force you to be better all the time. Terry is extremely organized, a detailed, X-and-O guy, and Darryl is, too. He just really pinpoints key things about what’s important to winning, and just how important preparation and emotion are to your hockey game. So, I learned a great detail from those guys with detail and how those little things that you can’t measure like emotion and preparation have in the difference in the outcome of hockey games.

On keys for tonight’s game against the New York Rangers:
Well, they’ve got four lines that can produce offense. They’ve got a very experienced defense, they’ve got a great goalie, so we’ve got to be sound. We’ve got to be ready to go, we have to check this team really well. The way they have their lines set up, every line, top three, has got mid-20’s in goals. It’s not as if you’re just trying to shut down a player. You’ve got to play a really good team game. I think you’ve got to play really good defense, and you’ve got to put pucks in behind them to establish the forecheck. They’re a solid team. They’re one of the top teams in the league since October 31st. Not surprising. They had a tough start, but they’ve been as good as anybody in the last month.

On whether he’s “mindful” of back-to-backs:
We’re mindful of the schedule. We’re a better team when we roll four lines and have six D playing, anyway, but it certainly puts a little more focus on that knowing that we’ve got a lot of games at the end of this trip. But we don’t look past the game we’re playing. I think we’re going to do what’s necessary to try and win the game today, and then we’ll worry about the Islanders when the game’s over tonight.

On a big night for Marian Gaborik, and why 1,000 games is so widely recognized in the NHL:
I just think it’s a lot of games. One, you’re good enough to be in the league that long – that’s a big deal – and, two, it’s a big commitment. This is a very, very demanding game. It’s a physical game. To see guys play that long and still continue to be really good players is, to me, really impressive. If you look at how many really, really good players that have played that never came near that number, I think it’s a real accomplishment that’s noteworthy.