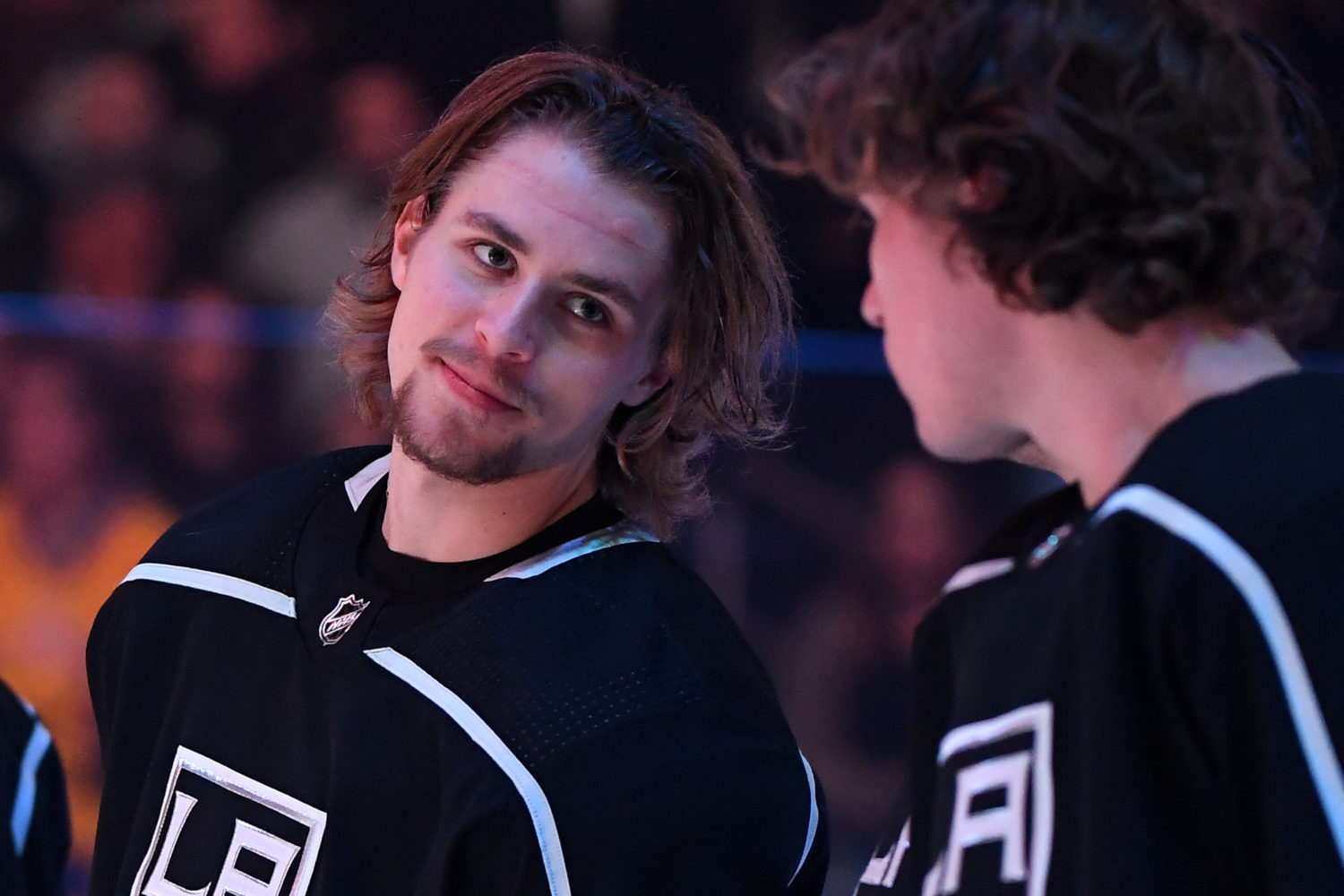 Good afternoon, Insiders. Thanks for your patience this morning (and the lack of a WUWTK) as we monitored the Skirball Fire, which was creeping uncomfortably close to where we live and where my wife’s parents live. We’re still keeping an eye on the situation, but when I drove through the Sepulveda Pass en route to Toyota Sports Center, it did not look like this:

Not the typical morning commute… pic.twitter.com/kJIOQeqsIK 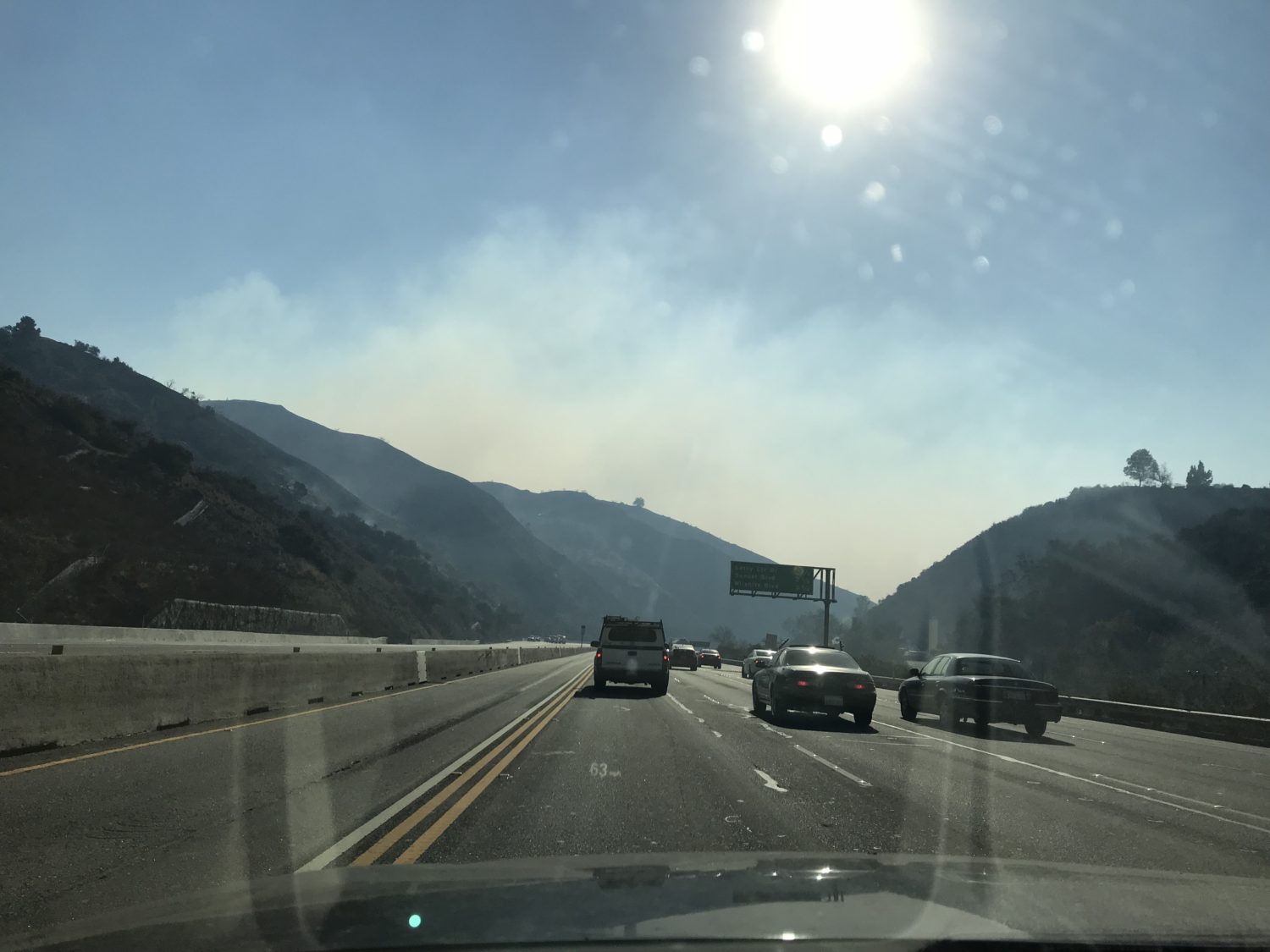 -Some more site news: as noted on Saturday, I’m leaving early tomorrow morning for Madison to call Wisconsin-Notre Dame on the Big Ten Network. If you’re interested in watching, the game on Friday will begin at 6:05 p.m. PT. There are no Kings prospects on either team, but Wisconsin’s Trent Frederic (BOS / 1st round / 2016) and Notre Dame’s Andrew Peeke (CBJ / 2nd round / 2016) were both named to USA Hockey’s preliminary World Junior roster yesterday.

During the interim, there will still be regular LAKI content. PumperNicholl (yes, THAT PumperNicholl) will take over blog duties and will have news, reports and quotes all day Thursday and Friday and will be backed up by Jessi. We talked a little bit about this on a Kings Men Podcast we just recorded with Jesse Cohen. I’ll be back Saturday morning to set the stage for Kings-Canes.

-Today’s practice was optional. No line rushes were held. Both Andy Andreoff and Kyle Clifford practiced, and Andreoff is still closer to returning, though it’s not yet clear when John Stevens will choose to re-insert him into the lineup. “He’s getting close. He’ll be reintroduced to practice,” Stevens said. “It’s tough on a guy when he’s been out for a whole week. Even though he’s healthy, he’s got to get his legs back, he’s got to get his timing back, he’s going to get touches with the team, so we’ll continually evaluate with him. The problem for that is we haven’t had a lot of practice times, just based on the schedule. So you get some time in today with the small group and we’ll get back into practice tomorrow and see where he’s at.”

-Jeff Carter has graduated from a Roll-A-Bout to a crutch and a walking boot. He remains out long term. He is months away. There is no real update here.

-Good news! Gabriel Vilardi, who recently returned to Los Angeles for an appraisal on his back injury, has been cleared for contact and is nearing a return. He returned to Windsor earlier in the week after getting cleared.

Via the Windsor Star:

As it stands, Vilardi is expected to return to the lineup on Dec. 28th in Sarnia in the team’s first game after the Christmas break.

“I’ve kind of always been taking it day by day,” Vilardi said. “They said two weeks contact and I’m good to go.”

Good news for the Spitfires, last year’s Memorial Cup champions, who have held tough in his absence, going 16-10-2. Because the clearance came so late in the fall, it means that Vilardi will not be a part of Canada’s World Junior team.

-Los Angeles prospects named to preliminary rosters: Cole Hults (USA), Mikey Anderson (USA), Kale Clague (CAN) and, as learned today (and widely expected), Jacob Moverare of Sweden. Hults moved into USA Hockey’s radar with a strong start to his freshman season, while Anderson is a very good bet to make the United States roster. Clague continues to look like a first pairing option, while Moverare, the last player cut from Tre Kronor team last fall, had skated in a pairing with top 2018 NHL Draft prospect Rasmus Dahlin over the summer and could be given an opportunity to play the steady, stay-at-home counterbalance to Dahlin’s multidimensional dynamism once Sweden gets going.

-Did you notice Nick Shore making some plays and flashing some impressive stickhandling skills in setting up plays last night? Many of us did from press row.

As did John Stevens. “We just did our ratings and we all really liked his game last night,” he said. “We thought that was one of his better games in a while. I think Shoresy’s hockey intelligence is one of his big assets, and I think when he has intensity in his game – which he had last night – it allows him to be a good player. We all thing he can make plays. He was certainly a guy that was really good at creating offense as a college player, and he did it in the minors, and we think he can do it here. He has really good hockey intelligence, he sees the ice really well, and we’re not surprised by it. It’s kind of hopefully what we expect from him more and more often.”

Shore made a nice play to maintain possession along the boards to set up Jake Muzzin’s goal and finished with a plus-one rating in 14:16 of ice time, winning 7-of-14 faceoffs.

-Kurtis MacDermid practiced on Wednesday, and when removing his glove to untie his skate laces, the aftermath of Tuesday night’s bout with Chris Stewart was visible in his scarred knuckles.

“It’s something you do for the team and put your body on the line, but I’m happy to do it,” he said. “Just trying to get some momentum going in the game at the start.”

Anyone who recalls Ryan Flinn hitting his head on the ice when fighting Jim Vandermeer at Staples Center in 2005 understands that bloody knuckles are clearly more preferable to the types of frightening head injuries that can occur when one of the participants is off-balance and falls. And so in 2013-14, the NHL began implementing a two-minute minor on combatants who remove their helmets prior to fighting. Fighting brings inherent risks, but this is still a good step in the name of player safety.

Looking to provide a “spark to the game” during a typically slow Kings-Wild start, MacDermid is never phased by hitting the helmet. It’s a symptom of the rugged role he plays.

“I know when I’m hitting the helmet, but just kind of keep going,” he said. “…Especially the next day, it doesn’t feel too good.”

Grandfathered in with more tenured players, Stewart chooses to not wear a visor. He’s one of the reported six percent of players who choose not to wear a visor. That means there’s less of a shield to block punches, providing his opponent a slight advantage when squaring off.

“He’s a veteran, and he’s been around for a long time and he’s really tough,” MacDermid said of Stewart. “It was a good fight, and I respect him a lot, so it was good.”

Is there any general approach towards squaring off with another willing combatant?

“It all depends on the fight,” MacDermid said. “If it’s more of a grappling fight, then I try to rip his bucket off. We were kind of just swinging away there. Once I get started, I don’t really want to stop, and sometimes I just end up punching it off some times.”

-The Ottawa Senators, tomorrow night’s opponent, are in Anaheim tonight. With nine wins, the Senators are 1-7-1 since sweeping the NHL Global Series in Stockholm and have pulled their goaltender in each of the last two outings. Craig Anderson will get the nod in Anaheim tonight, though there’s no real sense of who Los Angeles will face without seeing how tonight’s game at Honda Center develops.

Via Bruce Garrioch of the Ottawa Sun:

There will be no California Dreamin’ for the Ottawa Senators.

As a difficult and extremely rare 80-minute skate wrapped up Tuesday at the Toyota Sports Centre in nearby El Segundo, coach Guy Boucher gathered the players at centre ice and read them the riot act as the Senators prepare to face the Anaheim Ducks on Wednesday night at the Honda Center.

With only one win in their past nine games and coming off a horrible 5-0 loss to the Winnipeg Jets on Sunday night, Boucher, speaking loudly with the players looking on, was overheard telling his team he wants to see a far better effort and, at one point told them, he wants them to play with some “(bleeping) urgency”.

He hasn’t given them many on-ice tongue-lashings, so this was right up there.

“We were definitely not happy about the last game and it was definitely unacceptable the way we performed,” Boucher said after the skate. “Was it because we were so happy we got out of losing streak (Friday in Brooklyn) and we were happy with the work ethic? Whatever reason is unacceptable.

There are more interesting quotes in the Sun article. In late October, Los Angeles defeated Ottawa 3-2 in a shootout, peppering Mike Condon with 43 shots through overtime and scoring twice on three shootout attempts.

-Enjoy your Thursday and Friday, Insiders. Let’s talk Saturday. Have fun with PumperNicholl – he’s excited to drive the limo over the next two days and will do a great job.