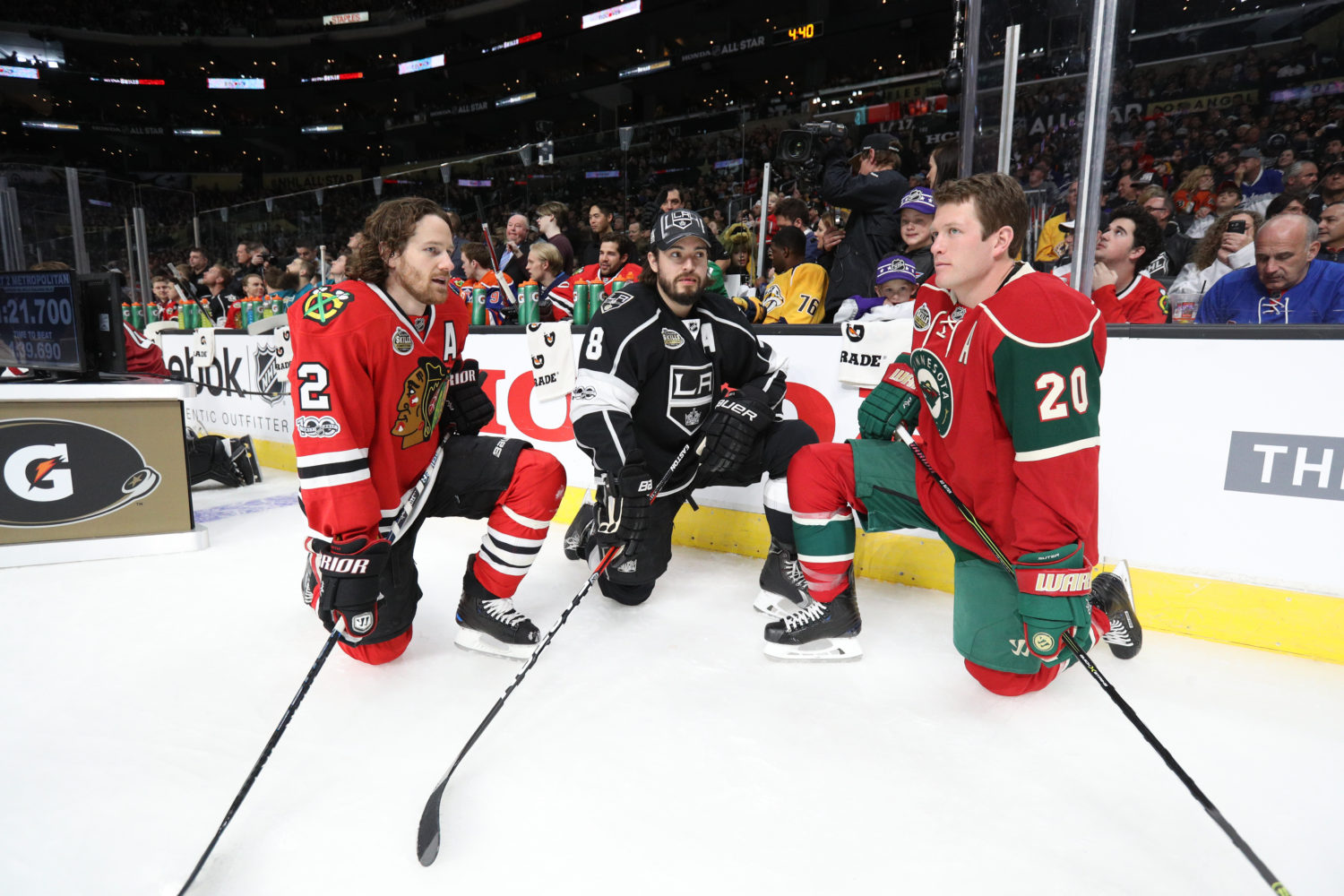 Good afternoon from the offices adjacent to Toyota Sports Center, Insiders. A reminder: tonight’s game against the Minnesota Wild starts at 7:00 p.m. (NBCSN / FUBO TV / KABC 790 / I Heart Radio). There will be a bit of a flashback as the game will be called by Chris Cuthbert and Jim Fox. For Kings fans, it wouldn’t be a bad thing if that’s where the 2016-17 parallels end. Lines and pairings:

-Jonathan Quick left the ice first and will be expected to start in net. Nic Dowd, Oscar Fantenberg and the players on injured reserve remained on the ice with Darcy Kuemper for some extra work, so they’re not expected to get into tonight’s game. Speaking of the players on IR, the Kings shared some injury news yesterday, which I passed along via Twitter. Andy Andreoff has been cleared to resume practicing with the team, and Kyle Clifford continues to progress and will be integrated into practice this week. There’s no real timetable yet on Clifford’s return. Andreoff is closer. Both players have skated each of the last two days, and Clifford was becoming integrated into practice on last week’s road trip. There’s nothing new with Jeff Carter. He remains months away.

-Torrey Mitchell said he had some “butterflies” prior to his first shift, which is natural when joining a new team, but settled in well as his debut in Chicago progressed. He won 8-of-12 faceoffs in 12:49 of ice time. “It was fun just to put all the immigration stuff behind and just get back to what we’re in here for, and that’s just playing hockey, so it was good,” he said.

-So, some may have noticed that the Kings are 10-3-1 on the road and only 7-5-2 at home. They won their last home game – the first game of their current five-game winning streak – but will be looking to channel the mentality and success they built up on last week’s trip into tonight’s game.

“Yeah, we talked about it yesterday – carrying that momentum from the road and our road game back into Staples Center,” Jake Muzzin said. “[We’re] Trying to put a finger on what’s been the difference, and I think we found it, and hopefully we can execute coming out tonight with a big start to the game.”

One thing I’ve picked up on is that many players will say finding success at home stems from having the right mindset so that they’re ready right off the bat. The Kings have allowed the first goal in their last four home games and despite a Western Conference-best plus-24 goal differential have been out-scored 28-21 in first periods this season, so there’s a clear reference point to attack and improve.

“It’s more about getting your mental game ready and getting mentally prepared to come out with that same road mode intensity that we had on the road these past four games,” Muzzin said.

For some players, that may mean cranking up the music en route to the game, whether traveling on a bus while on a road trip or carpooling with teammates to Staples Center. Muzzin usually will drive to games with Trevor Lewis and Tanner Pearson.

The trio shares the controls of the music, but if Muzzin has his say, and the radio is on, he wants a non-interrupted stream of music.

And blasting music isn’t simply a cure for getting ready to play a game. That preparation starts before and continues after the players are taking the 105 to the 110.

“I mean, there are still some guys that do it that need to get focused that way,” he said. “You’ve got to do what you’ve got to do to get ready for a game. If it’s headphones on and loud music, then [heck], do it.”

-I’ll have more from Drew Doughty today, but here’s what he shared about playing alongside Muzzin, as opposed to Derek Forbort: “It’s different. Muzz is a little bit more … active in the D-zone, where he’s really going hard at guys and he’s trying to react quicker, whereas Forbs, he’s more patient. Forbs is unbelievable at defense. Like, I can’t even explain how good that guy is at defense. He’s so good. The difference between him and Muzz is Muzz might be a little better at moving pucks, and that’s not a knock against Forbs, but Forbs’ defense, he might even be better than me at it. That’s how good Forbs’ defense is, and that’s how much confidence I have in his D. Yeah, they’ve both been great.”

-Tonight’s game pits three Kings against their former team. Darcy Kuemper and Christian Folin played for the Minnesota Wild as recently as last season, while Marian Gaborik scored the first goal in Wild history and is the franchise’s all-time leader in goals (219), power play goals (59) and game-winning goals (43), and ranks second in points (437) in 502 games between 2000-09.

But tonight will be Gaborik’s 12th game against his former team. He has three goals and six points in his 11 previous games against Minnesota, one goal and one assist of which were netted at Xcel Energy Center in the teams’ previous meeting on February 27.

Kuemper isn’t expected to get into tonight’s game. The next Kings-Wild match-up begins the first half of a March 19-20 at Minnesota / at Winnipeg back-to-back, so there’s a good chance he could make his first career start against his former team some three and a half months from now. Folin, on the other hand, is projected to play tonight, one game after he scored an important third period goal against Chicago for his second marker as a King.

“I obviously circled [tonight’s game] right away,” Folin said. “I’ve been looking forward to it, actually, for sure. I’ve made a lot of really good friends in Minnesota and I had three good years there, so it’s obviously a special day, but at the same time, it’s just two points on the line and if we focus on our team game, we’ll be successful.”

That was essentially the sentiment that Kuemper shared. And despite being asked whether there was any bitterness towards the end of his Wild tenure, when he wasn’t getting a ton of game work nor regular reps during infrequent late-season practices, and the team chose to recall Alex Stalock for work when trying to ease Devan Dubnyk’s schedule, he said there weren’t any regrets towards his final year of his five-year stint in St. Paul.

“No, not at all,” he said. “I really enjoyed my experiences in Minnesota, enjoyed my time here. I’m just excited about a new chapter here in L.A. and really excited about how things have been going so far.”

Things have been going exceedingly well through his first 419 minutes with the Kings. He’s 4-0-2 with a shutout and leads all qualified goalies with a .944 save percentage and a 1.72 goals-against average.

“I think as you get older, things get a little bit easier,” he said. “You learn a lot about yourself and your game. I’ve always just tried to keep improving, and right now I’m really happy with where my game’s at.”

He’s also reunited with Bill Ranford, with whom he worked with “a couple times” when Kuemper was a member of the ECHL’s Ontario Reign early in the 2011-12 season.

“He’s obviously got a great track record,” Kuemper said. “We’ve had really good experiences so far, and he’s helped give me a really good foundation for this year that I’m quite comfortable with.”

The Kings and Wild have employed structured systems play for much of this decade that have leaned to the defensive and have made them among the more detail-oriented teams in the league. Minnesota probably gained a bit of a jump on Los Angeles in the push towards a speed-oriented attack that relies on excellent pacing, while Los Angeles still retains some of its “heavy” identity, but both teams have found continued success at suppressing shots and chances against when they’re on their games.

“It’s probably fairly similar [systems], actually,” Folin said. “My transition hasn’t been that hard because in Minnesota we had really solid D, and everything starts in the back end with good goaltending, so it’s fairly similar. They play kind of similar styles of hockey.”

Not as similar: outdoor opportunities in December.

“The difference [between Minnesota and Los Angeles] would be I live by the beach here,” Kuemper said. “It’s hard to beat that. I’m not complaining about it.”

-Still in the, uh, Wilderness are Zach Parise (IR / back surgery) and Jared Spurgeon (groin). Via Sarah McLellan, who joined the Star-Tribune after a terrific job on the Arizona Republic’s Coyotes beat, Minnesota is expected to line up with an offensive group of Granlund-Koivu-Zucker, Niederreiter-Staal-Foligno, Winnik-Coyle-Stewart and Ennis-Cullen-Mitchell and defensive pairings of Suter-Dumba, Brodin-Murphy and Reilly-Prosser. Devan Dubnyk is projected to start in goal.