Doughty: “I feel like I’ve been playing some of my best hockey” 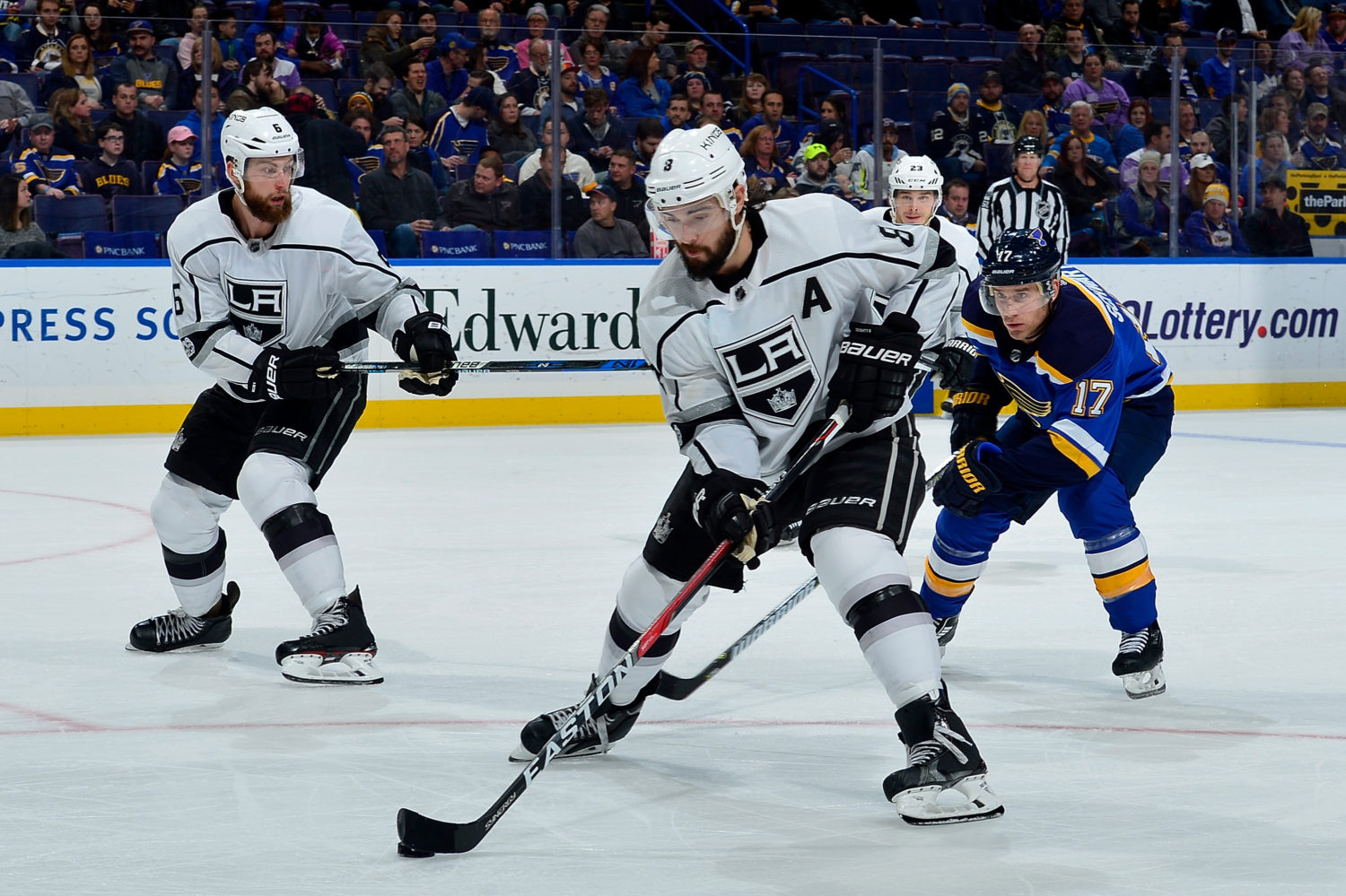 John Stevens adjusted his defensive pairings for the November 24 game at Arizona, placing Jake Muzzin back alongside Drew Doughty and aligning Derek Forbort with the Christian Folin/Oscar Fantenberg consortium. The Kings have points in all six games since then and will carry a five-game winning streak into tonight’s match-up with the Minnesota Wild.

How much does this Muzzin-Doughty combination affect the team, and most importantly, the output of its most important defensive player?

“It affects me a little bit, just because I was so used to playing with Forbs for a year and a half or however long it was, so the first couple of games were an adjustment, but now I’m right back to normal and I’m used to it already,” he said. “Maybe one or two games I was like, ‘there are a few different things,’ but we’re right back to where we were when we won the Cup five years ago, me and Muzz.”

And that benefits both players. In the 136-plus minutes in which Doughty and Muzzin have skated together, the Kings have a Corsi-for of 57.8%. When they’re apart, Doughty’s on-ice rate drops to 50.0%. When Doughty and Forbort are together, the team’s possession rate is 51.1%. When they’re apart, Doughty’s on-ice rate rises to 53.6%. (via Natural Stat Trick)

“It’s different. Muzz is a little bit more … active in the D-zone, where he’s really going hard at guys and he’s trying to react quicker, whereas Forbs, he’s more patient,” Doughty said. “Forbs is unbelievable at defense. Like, I can’t even explain how good that guy is at defense. He’s so good. The difference between him and Muzz is Muzz might be a little better at moving pucks, and that’s not a knock against Forbs, but Forbs’ defense, he might even be better than me at it. That’s how good Forbs’ defense is, and that’s how much confidence I have in his D. Yeah, they’ve both been great.”

That’s some impressive praise for Forbort, among the better players on the roster at defending the rush. But, hey, let’s agree to disagree with Drew here. There probably isn’t another defender in the league as good as Doughty at moving his feet to cover ground and shut off plays, nor is there anyone as equipped at checking, using his stick to thwart net-bound pucks or making dynamic plays to snuff out rushes. I could keep going.

“I always feel like there’s never really a game where I don’t play well, but as of late I feel like I’ve been playing some of my best hockey,” he said. It comes with the context that before the recent winning streak, he might not have been at his absolute best. A brief, early-season lull has crept in from time to-time in his career, but that’s often corrected quickly.

And, it should be understood that “Doughty hadn’t been playing his best hockey” comes with the reminder that even when he has a B-game, instead of, say, his performance in Detroit one week ago, the team still understands that he has a positive impact on the team’s performance.

“Maybe I’m not getting crazy numbers or anything like that, but my defensive game has just been on point,” he said. “Like, the other night, going against Ovechkin’s line, [Sunday] night going against Kane and Toews’ line, those are not easy things when you face those challenges with every team, but those two teams are really big challenges. Obviously, I have a lot of help from my partners. Derek’s been an unbelievable partner for me. As of late, Muzz has been a great partner for me. I can’t say it’s all on me, but I do feel like I’m playing some of my best hockey right now, and a lot of that just has to do with getting older. My leadership has grown so much, so I really feel good out there and feel good about myself and feel good about our team, and that just helps with the confidence and makes me play better.”

Of course, the Muzzin-Doughty partnership was a major boon for the team in the 2014 postseason, when their pairing matched up against the top lines on San Jose, Anaheim and Chicago, three of the Western Conference’s four highest scoring teams that season, before the team completed its second Stanley Cup run.

“We have pretty good chemistry and we seem to not spend any time in our zone when we do get the puck. We’re both good at breaking the puck out,” Doughty said of Muzzin. “Muzz is a good player. He’s been playing great, really. He makes things simple when he needs to. He makes the outlet passes when he needs to and gets up on the rush. He’s got an unbelievable shot. He’s been great for us, and we need him to be really good for us. He’s one of our top two, three defensemen, and we need him to be great for us in order for us to win, and that’s why we have won lately – because he’s been great.”

“I don’t have the best shot, I’m not the fastest skater, and I don’t have one of the best skills of any on the team. I just compete as hard as I possibly can, and I think that’s what separates me from some other guys around the league. I hate losing. I hate being embarrassed. I don’t want to ever get beat. I hate being on the ice for goals against, and I just want to help the team win and I know I’ve got to try to be one of the best players on the ice every single night.”