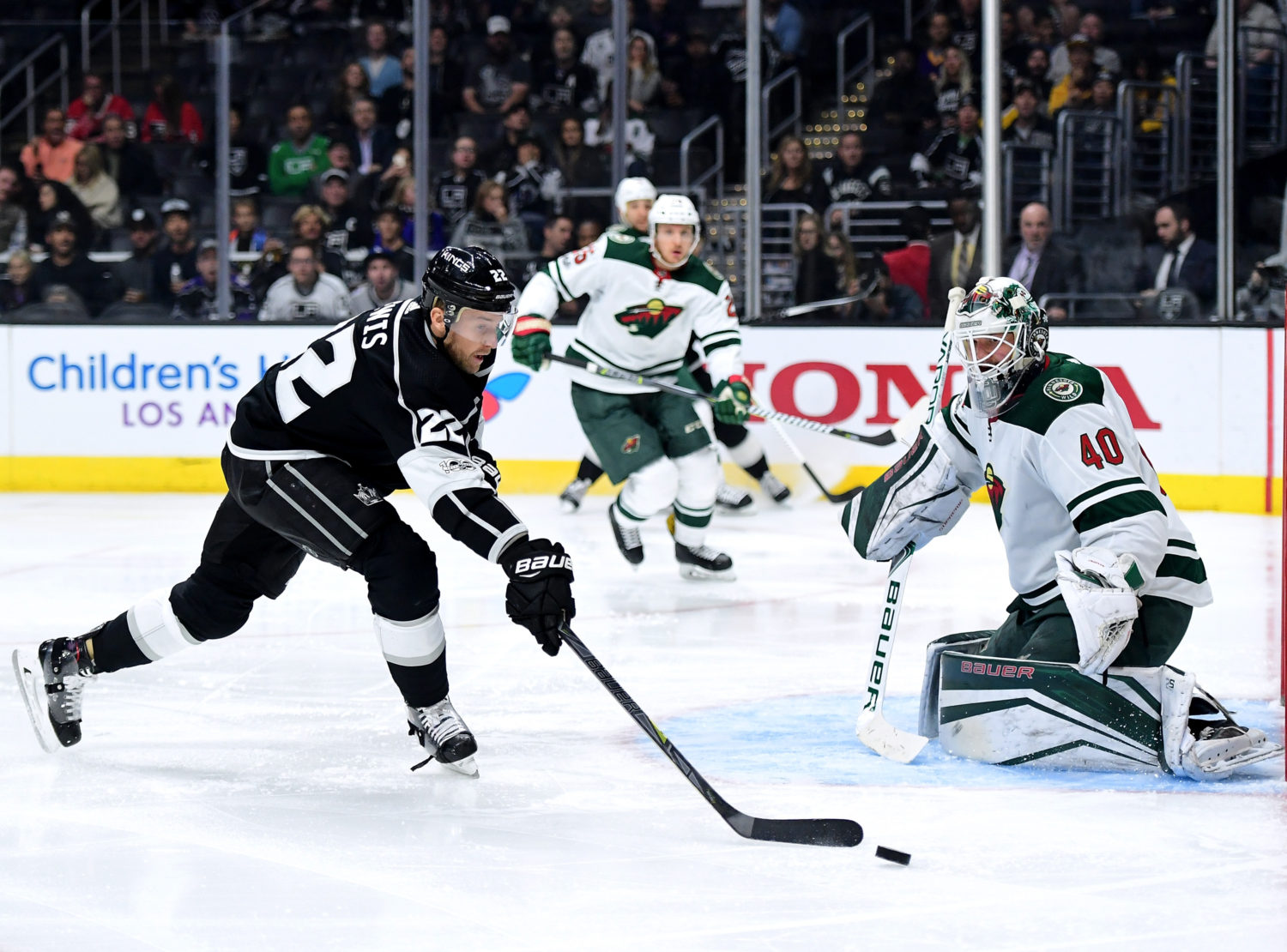 Bruce Boudreau, on losing the lead off the 2-on-1 with Gaborik and Kopitar:
It was a bad play. I mean, you make the play and we’re talking about just getting it, shooting the puck at the net, and being simple. And we’re trying to make a cross-ice pass and it doesn’t work. And then, coming back instead of just coming back to the position, the defensemen goes to hit a guy and leaves a 2-on-1. And you know, probably a 2-on-1 against the worst two guys on the team to leave a 2-on-1. So I mean, ties it up and which one was the next one? [Reporter: The shovel into Brodin.] What are you going to do on that? And I mean, the faceoff one was a pure interference. Got to be called. They don’t call it and it hits our stick and it’s 4-2.

Boudreau, on knowing that the Kings were going to push back in the third period:
We knew it. They’re plus-23 in the third and leading the league in that. You knew they were going to come out. But if we would have done what we did the first 35 minutes of the game, I thought we were really good in denying a lot of scoring chances and getting it deep and playing the way we have to play to be successful. Then nearing the end of the second period, we had three turnovers I think outside our line. Or the one turnover and they scored the goal you know, 1-1 and then we got the momentum back. And then we had three turnovers I think in the last five minutes and it gave them a little life going into the third. But when they put their push on, we just didn’t do anything about it.

Boudreau, on the lack of offense from his top line:
I don’t know. I mean we talked a lot about Kopitar and Doughty, you know because Mikko’s (Koivu) line was against Kopitar and I think they were almost out exclusively in the first two periods. And then they changed it up a little bit. And when the play got going, the line changes were becoming a little different because we’d change after 25 and they’d change after 40 so you couldn’t get the matchups you wanted. And then they got a couple goals.

Devan Dubnyk, on what changed from the second period to the third:
Well, that’s the thing, you don’t want to give them life or anything to feel good about. And 2-on-1 from the far blue line, obviously they made a good play and they’re feeling good. The energy in the building is high and they start coming back. And that’s a good hockey team. It’s tough to weather that at the best of times, but you’ve got to try to take advantage when you’re at a good spot.

Dubnyk, on what the Kings did that allowed them to take the lead:
Yeah, and like I said, you feel the energy in the building and they got some life and they’re moving their feet. They check hard and they check hard in our end and they’re forcing turnovers and creating turnovers. And you know, they’re getting chances and that’s what kind of puts you back on your heels when they’re coming at you like that. You know, you’ve just got to take a lesson. We played a really good game for the first two periods and we want to be able to take that for the entire game.

Dubnyk, on his read on Kempe’s goal:
Yeah, I mean if I could do that play over I think I’d do something different. I was just trying to—you see obviously it’s a pass across, Brods (Brodin) is with the guy and I thought I could get there. And I tried to get it up in the air and it just went on his skate and caught me in an awkward spot. So it just, I’d do that one over if I could.

Tyler Ennis, on if there’s a way to explain the breakdown in the third period:
Just not good enough. It’s kind of how LA plays. They’re patient and they wait for the opposition to make a couple mistakes and they take advantage of it and that’s what they did tonight. Like you said, we were good for two periods. We play a full 60 minutes and I think we come away with that.

Ennis, on the difference between the second and third periods:
I think we played the way we were supposed to. We played it behind them, we cycled, we played well. Got pucks to the net and worked them down low and that’s how you’ve got to play against them. But we got away from that in the third and it cost us.

Ennis, on what LA was doing to dictate play in the third:
I think they just wait for you to get away from it and they take advantage. You know, they took advantage. We had some chances on the power play. You know, I think if we win the special teams battle, we win. I think if we play 60 minutes, we win. Like you guys said, we didn’t play in the third and that’s what happens when you play a good team.

Charlie Coyle, on giving up the lead:
Just because we’ve got the lead, we’ve got to make sure we’re doing the right things defensively. You can’t always on the rush with four guys up there. And yeah, it’s a shame that happened and at that point it’s still a game there. We’ve got to find a way and we didn’t do that.

Coyle, on breakdowns in the third:
I don’t know what it is. When we get the lead it’s almost, I don’t know if we just sit back or we just kind of focus solely defensively. I don’t know. We’ve got to find a way to keep pushing and play our game and keep coming at that and not let them come at us and sit back and wait for something to happen and just survive, you know? We’ve got to keep our foot on the pedal there and keep throwing shots. And they’re doing the right things and I don’t think we did that.

Coyle, on how the Kings were able to turn the momentum of the game:
I think they came at us and we kind of sat back and you can’t afford that. Especially with the lead, you’ve got to keep coming and we kind of stopped at that point. And that’s unacceptable to play like that.