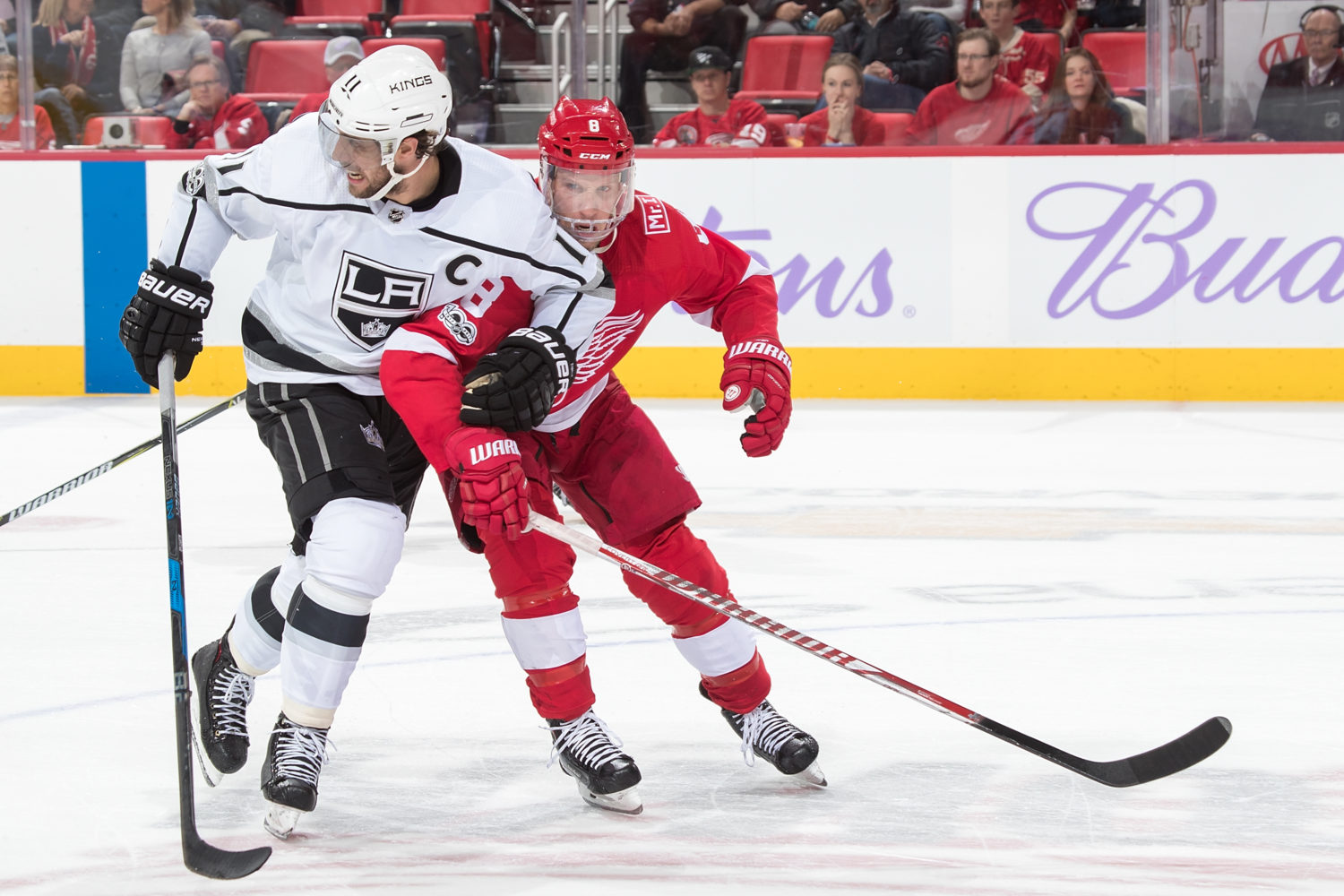 Anze Kopitar, on Jonathan Quick’s performance:
I think especially in the second period when it was still a one-nothing game, he made a couple of really quick stops just to keep us in it. And then we were able to give him a little bit of support after that. It’s obviously very nice to see him get a good performance and we’ll take it.

Kopitar, on the team’s mindset going into the third period:
Well, we just wanted to keep going. You know, nothing good happens if you’re sitting back and we wanted to keep attacking and obviously Adrian’s goal was huge and we were able to lock it down a little bit and just bring the game.

Kopitar, on what the plan was with a power play and 15 seconds left in the second period:
Well you know, 15 seconds, it doesn’t seem much, but you can still move the puck around pretty well and I think a lot depends on winning the faceoff or not winning the faceoff. But we got in there, won the faceoff, and then we moved it around pretty well and I was just trying to—I saw Drew’s pass coming across—and I was just trying to get it on the net somehow and it turned out pretty good.

Kopitar, on his ability to score this year compared to last year:
I mean I’m feeling good this year and maybe that’s the biggest reason. And I’m feeling confident again and I guess a big part of it is confidence too and having a good start, myself and the team. So it makes it a lot more fun and you know, just get rolling like that.

Kopitar, on whether his confidence was shaken at any point last season:
Yeah. I mean last year was just a lot of hockey played even before the season with Olympic qualifiers and the World Cup and all of the traveling that I did. So I was pretty tired going into the season and then things just did not go, and you know I’m not trying to find any excuses for last year, but I just had a bad year. But not looking back and looking ahead, we want to keep this rolling.

Kopitar, on whether he felt any pressure after signing his contract:
Yeah I mean there’s always, lurking around and in the media and in the social media and everything, there’s always some lingering around. But you try to block it as much as you can and I’ve had that with my contract after the rookie contract too, set in too. So maybe it’s a little bit of the case, but it is what it is now.

Kopitar, on Dustin Brown’s success so far this season:
I think, a breath of fresh air for him was huge. He definitely wasn’t as effective last year in playing his game, but now he’s just blocking everything out and he’s playing the way he can. And we’ve obviously played together for a long time and our chemistry has been there for the most part this year and that certainly helps. So I think we’re both the beneficiary of that.

Kopitar, on whether the team gets a boost when Quick makes save after save:
Oh that’s huge. It’s a one-nothing game in the second period and we’re on the power play and nothing’s going. We’ve got nothing going and he makes a couple stops—on our power play, their penalty kill—and it’s just huge. And then we come down and we tie it up and you’ve got 15 seconds left and we score in, I don’t know what, ten seconds or something. So that was huge coming in the locker room after the second with the lead and you know, after, I think in the third he’s giving us the confidence to go and play and press a little more and we were able to lock it down pretty good.

Dustin Brown, on whether Quick gave the team an opportunity to get back in the game:
Yeah I think he kept us in the game. They could have extended the lead and he let us hang around and we kind of got our feet under us. I don’t know what the span of goals was, I think three goals in the span of minutes, even though two goals came in the second period. Again, Quickie is—every day I say this to you guys, so.

Brown, on whether he watches Quick’s highlights on the big screen:
Yeah, I used to. Not anymore. I’ve played with him for ten years so I’ve seen about 400 of those saves. I guess probably the best way to explain it is playing in the Olympics—when he makes those saves, everybody else who hasn’t played with him is just like, jaws on the ground and I’m like, “Okay, let’s go.”

Brown, on whether it feels like “the cup years” when the team is clicking:
I think there’s a lot of work left really. I think we have spurts of it. But I think those teams that won cups, we were like that for 59 minutes and 30 seconds. So that’s the difference, teams that can play 60 that way are eventually going to do well.

Brown, on his impressions on the new arena :
I thought the building was nice, the ice was not the best. So it’s rolling. So I wish they had had that type of ice 10 years ago with the teams they had here. Would’ve helped.