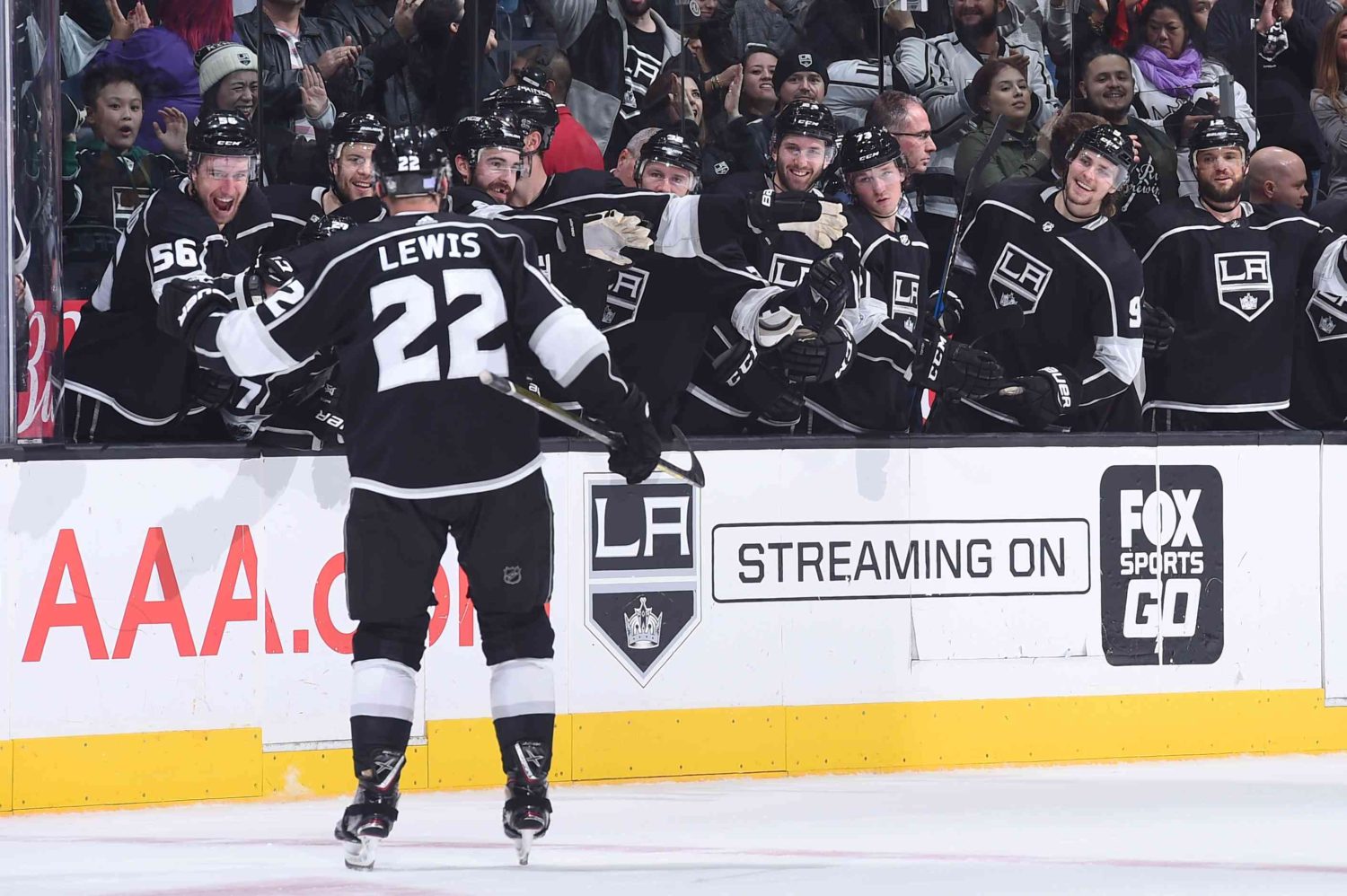 Good afternoon from the skies above the Midwest. The Kings practiced at Toyota Sports Center before boarding the flight to Detroit Monday morning and aligned as such:

-Defensive pairings were fluid. There was some transition work, some work utilizing the defense in the offensive zone, and several other flow-type drills. The players were on the ice for roughly 40 minutes before stickhandling through El Segundo towards the airport.

-Several quick Wings updates: Goalie Petr Mrazek, removed from Saturday’s overtime loss to New Jersey as he underwent mandatory concussion protocol, appears to be fine. Trevor Daley, who suffered a neck injury when he collided awkwardly with New York Rangers defenseman Paul Carey on Friday, skated today but will not play tomorrow night. Martin Frk (groin) has been ruled out for tomorrow, as well. Detroit native David Booth scored twice on Saturday, marking his first NHL goals in over two and a half years. Booth, who also spent the last two seasons playing for Vladivostok and Omsk in the KHL – Vladivostok! – last scored in North America on March 31, 2015, during Toronto’s 3-1 win over Tampa Bay.

-Meanwhile, your sexy, boldfaced, can’t-miss read today is about SIX ON FIVE SCORING. The Kings have been pretty good at it this year! With Dustin Brown’s game-tying goal with Jonathan Quick pulled late in the eventual shootout win versus Anaheim, the Kings have now scored three six-on-five goals in their last five games. I’m not sure if there’s any commonality when also including Tyler Toffoli’s improbable overtime buzzer beater with Quick pulled in Boston, other than to say, Hey, Look At The LA Kings And Their Pulled Goalie Luck.

But, is it luck? Or, might there be systemic underpinnings to this recent success?

“I just think your key guys make key plays at key times of the hockey game, right?,” John Stevens said. “We actually put Lewie on the ice the other night because Lewie was all around the puck, and if you look at what happened on the goal, Lewie’s just one of those guys, he’s like the mortar between the bricks. He holds everything together, he goes to the front of the net, he creates a big logjam, which creates spae for Brownie off the puck. We’ve got guys that have been in those situations – your Kopi and Brownie and Drew – they’ve had success in those situations before. They’re not intimidated by the situation. It’s not a situation you want to make a habit of, but the fact that we’ve gotten points in those situations, I think has been really good for us.”

“I just think the plays are there, and we’re making them,” Anze Kopitar said. “You can’t really make those set plays, especially not on a delayed penalty. You don’t even know who’s going to be on the ice, if you’re going to be in the zone. Maybe 6-on-5 with the goalie pulled is a little different, because you at least try to start in their zone, so you can somewhat draw a play off a faceoff, but then go from there.”

In other words, the Kings’ top players are simply executing well. It’s a worthwhile point to discuss, because for several years, there hadn’t been as much six-on-five scoring. By the team’s own count, Los Angeles scored two extra attacker goals last season and yielded six. They also allowed 13 empty-netters.

“Well, we’ve been put in those situations, and I hate to say it, but we’re learning from those situations,” said Assistant Coach Don Nachbaur, who was not on the coaching staff last season. “Getting pucks to the net, as you saw the last game, we had a lot of good offensive chances leading up to that, but just catching a break. We got it up high. It started with Kopi winning the draw, getting it up high, and getting a lot of bodies to the net, and we caught a break on a loose puck. In past situations we weren’t winning the battle in those types of situations, and in this particular case the other night, we did.”

Anze Kopitar, on differing approaches between 6-on-5 play on a delayed call, and in the final minute:
Obviously, with a delayed penalty, you can be a lot more bold with the puck. That’s the time to throw backhand sauce across the blue line to create something that you normally maybe would hesitate a little bit, obviously, because the play is whistled down if they do get the puck. Six-on-five, you’re trying to fill in the position on the ice that you kind of mark. You’ve got to have, obviously, a good net-front guy. There’s somebody around the net kind of collecting the pucks, and then four other guys just filling in the other spots and trying to get the puck to the net, so I don’t think there’s a whole lot of thought that really goes into it, but at that time, it’s a desperation mode. You do whatever you think is best at that time, obviously.

Don Nachbaur, on the approach towards 6-on-5 play on a delayed call:
Obviously we want puck possession, but net-front’s the key for us. I think when things are really clicking for our hockey team as far as scoring, that was a real area of emphasis. For whatever reason we’ve drifted away from that, but we’ve put a lot of focus into it the last few days and getting back to that with our players. I think if we were a little sharper in that area, we may have scored two or three goals last game, but it surely surfaced in the tying goal.

-We’re descending into Detroit Metro, so that’s all for now. John Stevens quotes will follow from the bus ride to the hotel. Let’s talk soon, Insiders.