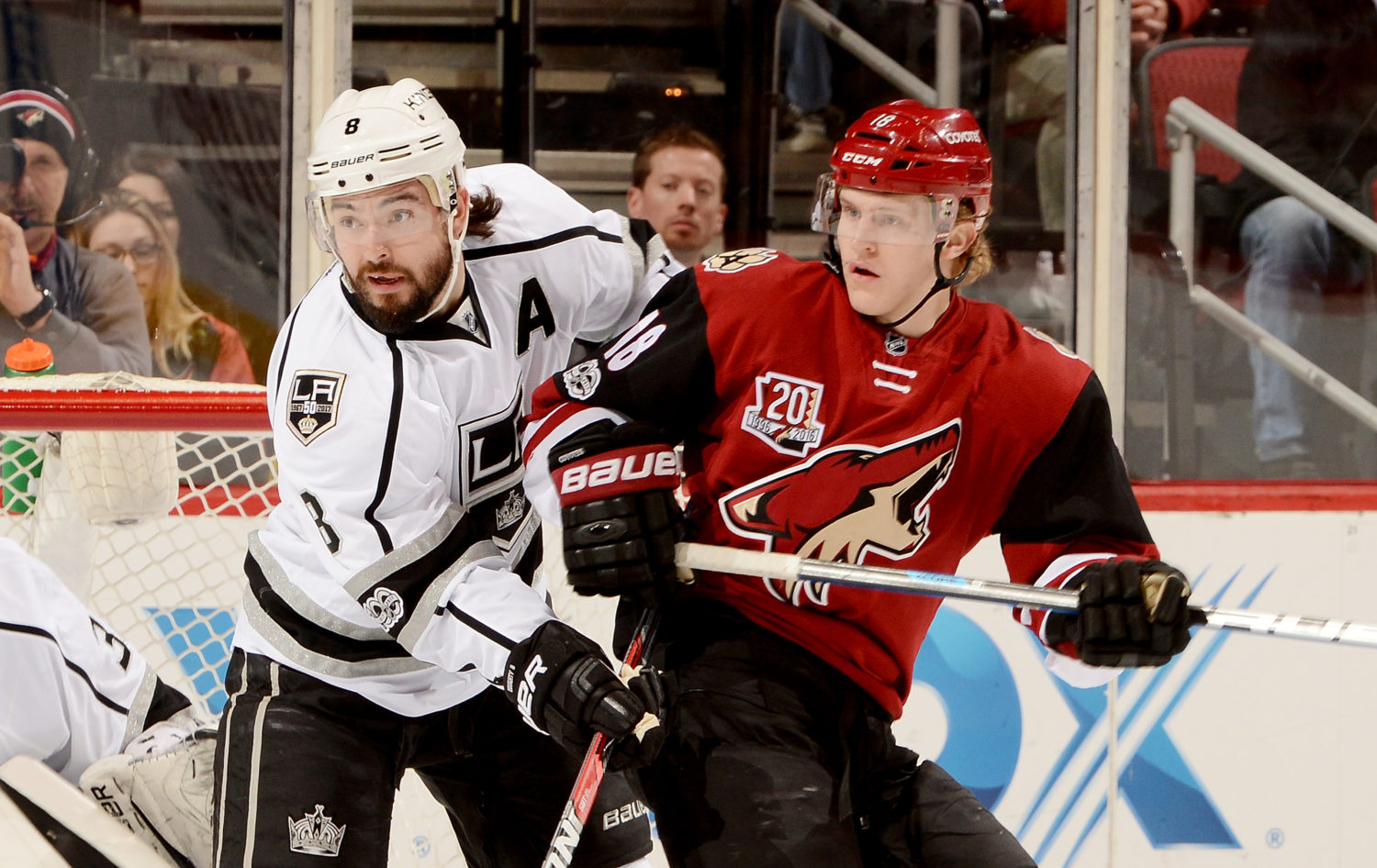 -Changes, ahoy! The projection is that Marian Gaborik will return to the lineup after missing the first 22 games of the season after recovering from a knee procedure, but that decision will be the end result of discussions between Gaborik, the coaching staff and the team trainers this afternoon. Should he not be able to go, the Kings would use 11 forwards and seven defensemen. Kurtis MacDermid took loops alongside Drew Doughty, but Jake Muzzin should be expected to get the majority of the reps there, especially in the event Gaborik is able to play tonight. If Gaborik goes, no MacDermid. As noted earlier, Nic Dowd is dealing with a minor injury and did not travel, and immigration issues kept Torrey Mitchell from joining the team in Arizona.

-Your goalie match-up appears to be Darcy Kuemper versus Scott Wedgewood. Kuemper left the ice first at Los Angeles’ morning skate, while Wedgewood is projected to go for Arizona after Antti Raanta left Wednesday’s game versus San Jose in the first period with an upper-body injury. Marek Langhamer is expected to back up Wedgewood, a 2012 World Junior Championship goaltender with Canada, who was acquired from New Jersey for a fifth round draft pick in late October. Wedgewood has never faced the Kings in his career, but Kuemper is 3-0-1 with a 1.00 goals-against average and a .958 save percentage in his lifetime against the Coyotes. Promising 19-year-old Arizona defenseman Jacob Chychrun, who suffered a knee injury while training late in the off-season that necessitated surgery, continues to skate and has progressed to the point where “it’s more like [he’s] day-to-day,” according to Coyotes coach and former King Rick Tocchet.

-There’s always some leeway defensemen are afforded in using two hands on their stick to clear the area out in front of their net. Jake Muzzin is one of those players who has had success in goalmouth battles, and as he shared, punishing physicality isn’t always needed to neutralize the opposition’s forwards, as referees don’t want to see too much entanglement in front of the net between the defenseman and the attacker. “A lot of the guys are really good at tipping, so it’s not so much cross-checking now as more as taking their stick out of play. You’re trying to eliminate the tip and keep body position, as well,” he said. “And, also, you have to feel out how the game is going. Are the refs calling it tight or are they letting the stick stuff go? So, it all kind of comes into play. But, definitely, you want to show your position and a lot of the times the cross-check is allowing you to hold your position and keep him out.”

Personally, he’s also looking to further those hard, physical minutes around the net. “Tough guy to play against, making plays in our zone,” he said. “We kind of got away from skating with the puck and we forget we want to move the puck quick. But, a lot of times moving it quick is moving your feet, too. So, get back to that and be excited about the challenge tonight.” He skated with Drew Doughty in line rushes, so there’s a chance we could see the return of a familiar pairing used heavily in 2013-14.

-Should Muzzin and Doughty log heavy minutes together in a variety of situations, there’s a good chance they’ll see an awful lot of Clayton Keller, Arizona’s prized rookie who has emerged as a Calder Trophy favorite with 11 goals and 20 points in his first 24 games. He scored against Los Angeles in the preseason, but tonight’s game will be his first regular season game in the Pacific Division rivalry.

One of the players used as a comparable to the 5-foot-10, 168-pound Keller is Patrick Kane.

“Small little guy, makes good plays, good hockey sense,” Doughty said. “But, you know, we know how to play against those guys and how we need to shut them down. That’s just physical. I don’t know if he’s a competitive guy or what he is. I don’t know enough about him, but usually when you’ve got a small guy like that, you can push him out of the game with physicality.”

Of course, physicality comes with the understanding that highly skilled, slippery players like Keller take advantage if the opposition is hellbent on going out of its way to ensure make hits on him.

“I think one of your best tools to defend is your body,” Stevens said. “We talk about moving your feet, having a good stick and making body contact, I don’t think you want to run at him because he’ll take advantage of that if you’re overaggressive. But you still want to get time and space, and you still want to be physical in puck recovery, whether it’s him or anyone else.”

“You don’t want to be running around at him, because he’ll make you look foolish if he’s like Patrick Kane so yeah, it’s just little things,” Doughty said. “After he moves the puck, you’ve got to finish that hit on him every time. If he’s in front of the net, don’t be afraid to give him a few shots in front of the net and whatnot. So, yeah, we’ve just got to play him hard just like we play every other guy on this team. I don’t think he’s a guy – I don’t think he’s one of their top players, yet. But, he’s someone that we’ll need to pay special attention to, still.”

It’s not only the Kellers that the Kings will have to account for. They’ll look to put a clamp on Jordan Martinook, who has five goals and eight points in 10 career games versus Los Angeles. His 0.8 points-per-game rate against the Kings far surpasses his .26 points per game against all other NHL clubs.

Thanks for the gift this morning @LAKings! pic.twitter.com/pFfwxjQaDz