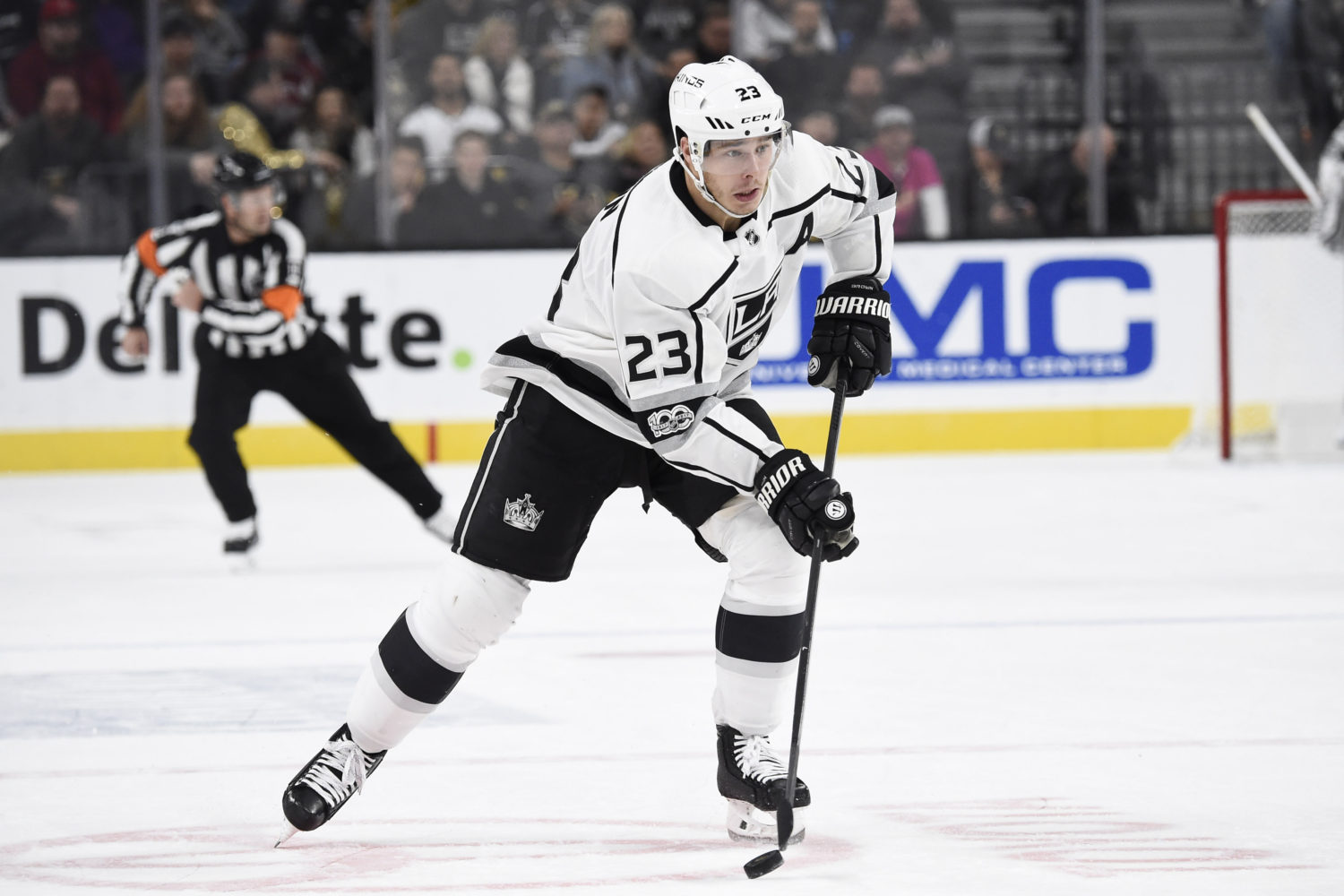 On whether the team will be adjusting its defensive pairs:
To be honest, we’re not sure. We’ve had some pairs, obviously, Muzz and Drew have been a really good pair in the past, but that was quite a while ago. I think just through the evolution of our team we’ve separated them. I’m not quite sure what we’d do there yet, but we just wanted to get some reps in and have a look at it.

On defending against smaller, skilled players, such as Clayton Keller:
Well, I think with any good player, it’s time and space. I think with a guy like Keller, when he gets the line he becomes a really dangerous player. What we always try to do with a young player is to try to find a similar player in the league that they’re familiar with. The guy that we’d probably compare him to is more like a Pat Kane or a Johnny Gaudreau. He’s a little bit undersized, but he’s extremely competitive, he’s got great edges, he can cut back and find space, and he sees the ice really well, so I think it’s a premium to make sure that we have good gaps on him, take his time and space away, and it’s probably the big thing because, say, if you want to put a body on him and hit him, it’s easier said than done sometimes. But I think time and space is the big thing with him.

On whether there’s any pressing concern on either the attacking or defending side of the puck:
Not really. I think throughout the whole year, we’ve tried to look at our entire game and look at areas, even if we’ve done things well, to try and reinforce those things in the area we think we can get better at. The bottom line is we need to come up on the right side of winning hockey games, and sometimes it’s just a little extra effort in certain situations that can make a difference. Small details matter, and small details all the time matter. That’s been more of the focus than anything else.

On whether there has been a gap between the forwards and defensemen recently:
I think when we play well, we use the term ‘really well connected,’ and when we don’t play quite as well, we get a little bit – the gap in between the D and the forwards. There can be a lot of reasons for that. Sometimes you’re turning pucks over, especially in the second period. Your D gets tired and you can’t get off the ice, and shift length can result in that, but yes, I think there’s been times where we’re not as connected in terms of our gap being with our forwards and our defense. We want to play fast, but it comes from being in really good position together, so playing fast doesn’t mean stretching out away from the puck. Playing fast means working really hard together to get it back and then going in the other direction really fast. I think it’s a part of our game that at times has gotten away from us, but it’s certainly been a focal point for us.

On whether Dustin Brown’s production simply comes down to opportunity, situations and ice time:
No, I don’t think it’s that simple, but I think any player, ice times and opportunities are earned in our sport, and I think Brownie’s come in with a really good start to training camp. He came in ready to go right off the get-go. He’s been performing very well from day one in terms of what he needs to do to be a good player. I think Brownie’s really kind of pulled back the last year and a half, to be honest with you. I thought his game started to take a better shape last year in terms of what kind of player he needed to be, and Brownie knows that he’s had a lot of success being a real puck pursuit guy, being around the net more, getting to the net more, playing a little more of a straight ahead, north power game, and if you put him with good players like Kopi, and he’s been with Alex most of the year, he’s a really good complement to those types of players and the puck ends up at the net a lot, and probably the big thing – and some of his production has come off the power play, but he’s always been a good net-front guy. I think he’s gotten back to really value that part of his game. He works on it on a daily basis. He looks at video. He talks to Billy Ranford about goalies – where do they look? Do they look over top, do they look off to the side? So, he’s a really good student of the game, but I think he’s just reminded himself what makes him a good player, and he’s really dedicated himself to it.

On whether Torrey Mitchell should provide speed and experience as a fourth line center:
Yeah, he plays center and wing, but he’s very good in the faceoff circle, skates really well, really smart defensive player and plays hard, so I think that element of speed and responsibility will be a really good addition.

On whether Nic Dowd’s injury is a minor injury that occurred during Wednesday’s game:
It did. At the end of the game we got word that there was something up. He skated yesterday, but still was in a situation where you didn’t think it was in his best interest to travel, so we left him home, just giving him the best opportunity to recover quicker.

On Marian Gaborik’s status:
He’s getting close. He’s not week-to-week anymore, he’s day-to-day. He’s been integrated into full practice. I think he’s getting close. [Reporter: Chance we could see him tonight?] Not sure yet. I’ve got to talk to the trainers.

On whether he makes much out of the team’s wide home-road power play splits:
I don’t know. It seems like we’ve been really good on the road in terms of our team play. The game plan’s the same. I don’t think the mindset changes. The focus of certain reads for our hockey team – whether it’s breakouts, faceoffs or philosophy in the zone – I think sometimes your team gets caught in situations where you’re on the road for a stretch and your game gets going, or you’re at home or a stretch and it’s now where you’re home-away, home-away, home-away. If you look at Arizona, they’re 1-7-7 at home and they have four wins on the road, and you say, ‘why?’ Well, actually their game’s gotten a lot better lately, and they’ve just been on the road lately. So sometimes it’s just the product of the schedule more than it is of where you’re playing, but we’d certainly like to see a little more consistency in that.

On Adrian Kempe’s end-of-practice faceoff work, and working with Pierre Turgeon on faceoffs:
There have been lots of us with hands on. Don has worked with him, I’ve actually talked to him about it. We’ve got one of the best lefthanded centermen in the game. It’s a great teaching tool for Adrian, just to watch Kopi in the draw – what he’s doing and what are some of the key fundamentals he can get better at. We like Adrian at the center ice position, it’s just a part of his game that’s got to get better. But we’ve done that all year long, trying to get reps in at the end of practice. We talked to him about ‘just keep working.’ Repetition is a great teacher of that skill, and we’ve got to make sure that he not only gets the repetition, but he gets some direction in that area as well.

On a late-skate conversation with Andy Andreoff, Nick Shore and Trevor Lewis:
I just wanted to talk to the line. That line’s been really good for us when we were really rolling, and I think that line has the ability, with work and detail, to really kind of get our team game in motion, and they can be an important group for us.