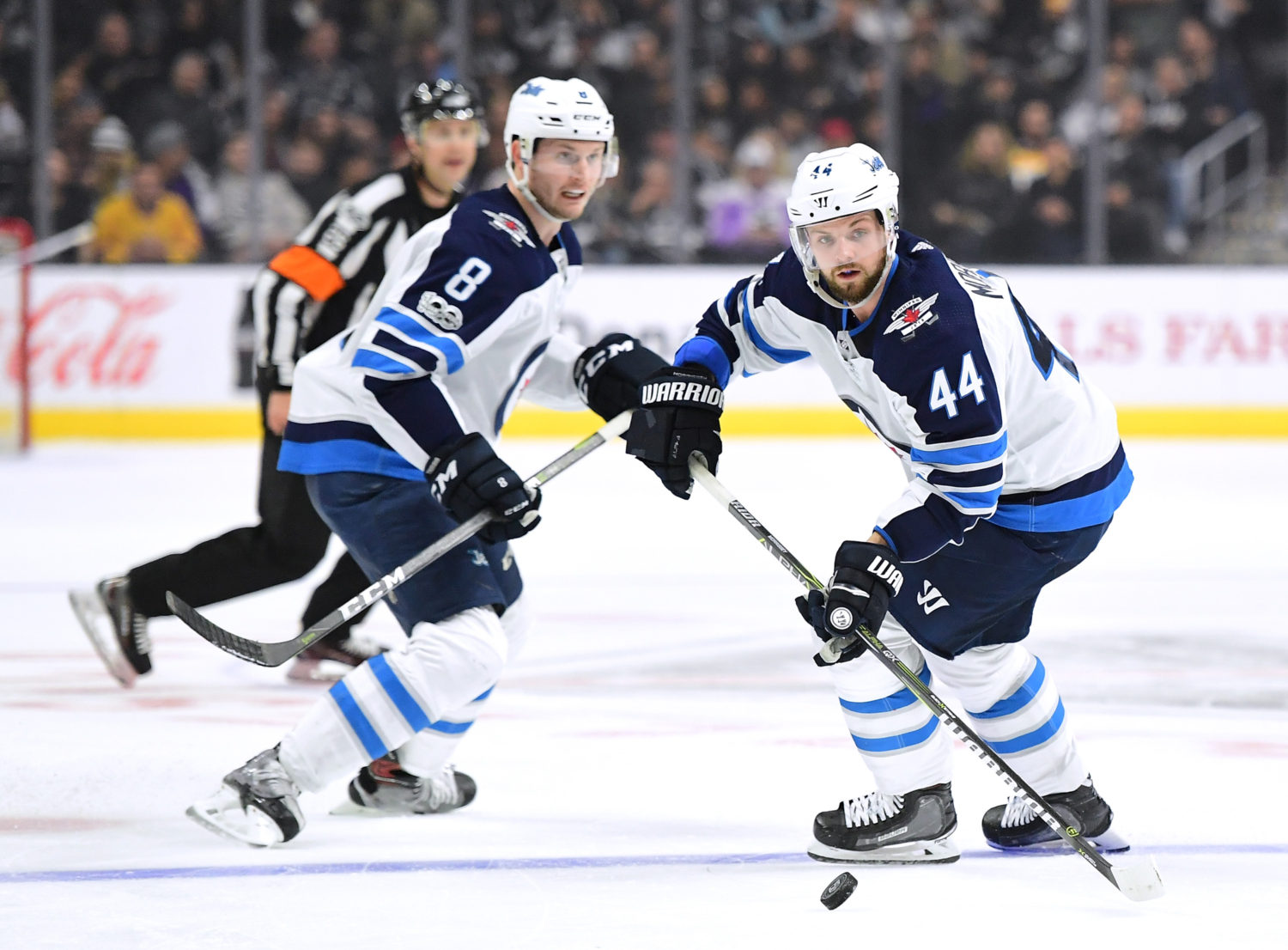 Paul Maurice, on getting a goal at the end of each of the first two periods:
Well the first was good, we liked their period. And then the second had been a bit of a problem for us, so that power play goal was really good to take the cushion into the third.

Maurice, on the importance of the penalty kill:
That line, Hendricks and that line, they all kill penalties. So as important as that goal was, the game winner, the blocked shots and some pretty fine penalty killing, pretty important.

Maurice, on the decision to put Dustin Byfuglien back with Josh Morrissey:
Yeah you know what, here’s the thing. Jake Trouba’s transition with Josh Morrissey to play against the other team’s best. And you saw it in the last two games. And that’s not an easy assignment and some nights it’s there for you and some nights its not. And we just thought that at the ten minute mark in the first period it didn’t look like it was going easy for him and you cant play against Kopitar and not be on you’re A-game, so we made the adjustment.

Nikolaj Ehlers, on getting timely goals:
Important. We won the game 2-1. It was a tough game today. We know how they play, but we had to be ready for that. We came out with a plan and we succeeded at it.

Ehlers, on whether he liked what he saw from the team during the second period:
Yes, I mean they had a bunch of chances. We took some penalties that—we took to many penalties. That’s easy. And we were able to do pretty well on the PK, but I think overall we played a good game. We played hard. We go the puck out and got the two points.

Ehlers, on the effort of Mason:
He did great obviously. Both of our goalies this year have been outstanding. And you know, with both of them behind us we feel an extra sense of security. It lets us play a little more, I wouldn’t say free, but you know they’re there for us. And they make some big saves. So they’re really important to us right now.

Ehlers, on the importance of blocking shots during the third period penalty kills:
Yeah, for a guy who doesn’t block a lot of shots, it hurts me as well seeing that. Um but you know it’s huge for us. Just taking the one at the end from Tanev, you know if that goes to the net it might go in. So it’s huge. They did really well. They can keep doing it.

Steve Mason, on making big saves at big moments:
Yeah I think early on I was able to feel the puck so that was good for me, you know after being off for a week and a half, to really feel the puck and start feeling good about the game and feel a little bit of a rhythm was important and you kind of try to just push that through towards the rest of the game as well.

Mason, on whether goalies feed off of each other:
Yeah you kind of can a little bit, but at the end of the day you’ve got to focus on what you’re doing and their talented enough team over there that that’s enough to worry about alone rather than what Quick’s doing. But at the end of the day it was fun to be out there playing against one of the best.

Mason, on his history of winning at Staples Center, dating back to his former team:
It must be the lighting here. It’s nice and bright.

Adam Lowry, on the win:
Yeah it’s always nice to get a win. I think going into it, I couldn’t ask for more, to score a goal and wewin the game. But it was a nice rebound from our effort in Nashville. I thought they really came hard in the second half of the game, and we found a way to win. Mase was really solid back there. Had a lot of key blocked shots going down the stretch there. It’s a big win. Gets us back on track.

Lowry, on getting goals at the respective ends of the first two periods:
Yeah anytime you can score going into the intermission it tends to carry over to the next period. And they have one of the best PKs in the league and to get that second goal at the end of the second there and kind of push our lead to two, it kind of gives you a little breathing room. Obviously we came a little undisciplined. There was some unfortunate breaks with the four minute high stick and just some other breaks there. But our PK was able to find a way to get through it and get it out.

Lowry, on how difficult the Kings are to play against:
They’re solid. They’re big. They kind of use their size and they have a lot of speed for how big their team is. And you kind of know the game to expect when you look at what Kopitar does down the middle and Dustin Brown is always up there leading the league in hits. You know it’s going to be a battle. I think they’re missing some big guys in front in Carter and Gaborik and guys like that, but they’ve had other guys step in. And it’s kind of like the grindy style. They have a lot of board battles they create. They’re big. They’re mobile and they step up on you. It’s a heavy game to play.