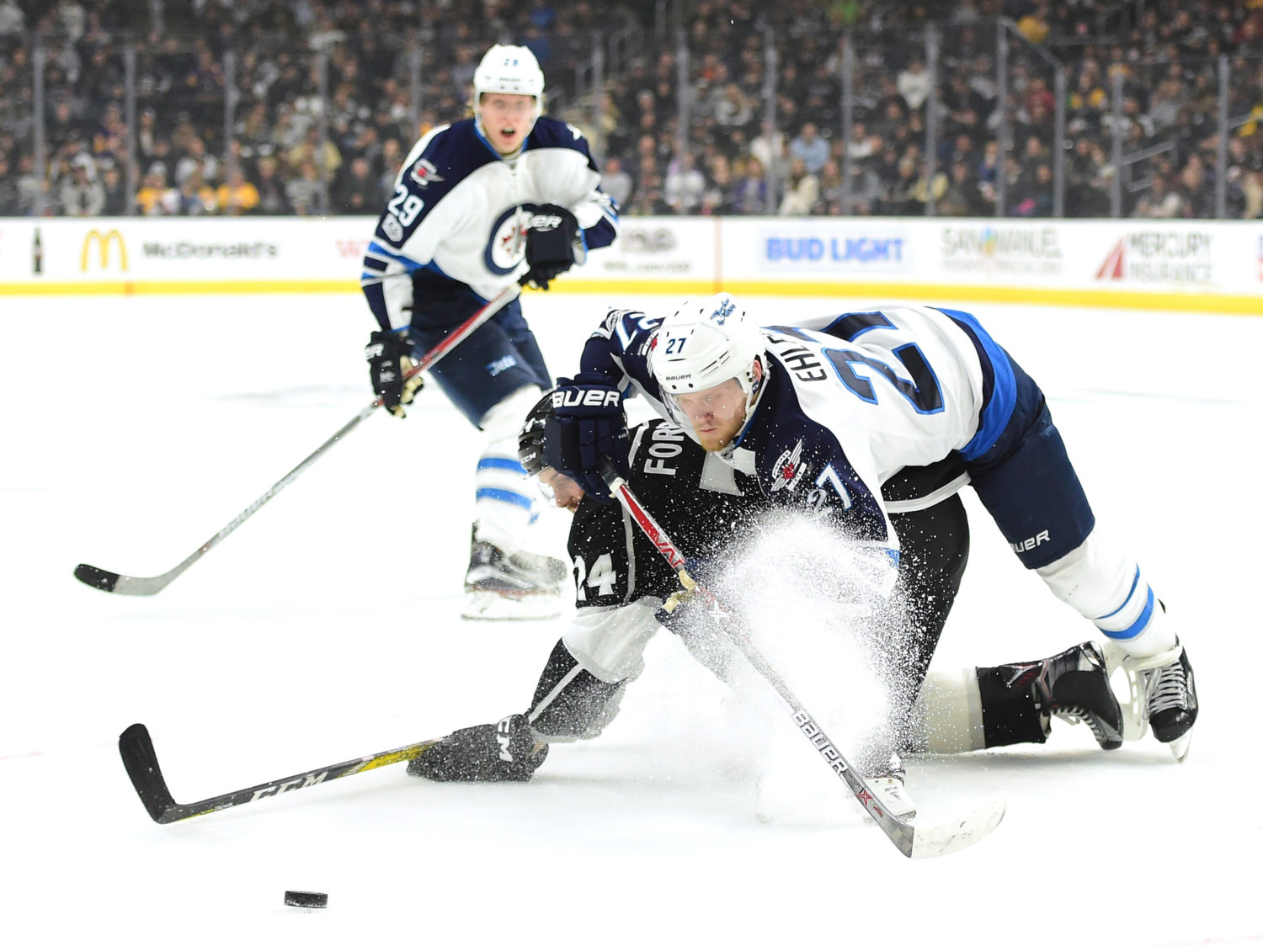 Good morning from El Segundo, where fire-stick farming was locally prevalent in altering the patterns of plant and animal distribution during the preboreal interval of the Holocene Epoch. That’s a bunch of mumbo jumbo, and today’s lines and pairings are much easier to decipher:

-Jonathan Quick left the ice first and will be expected to draw the start against the Winnipeg Jets (FOX Sports West, FOX Sports GO, KABC 790, I Heart Radio). A note that has been passed along: you can watch the game online with Fubo TV. Sign up here for a free seven-day trial.

-Marian Gaborik and Oscar Fantenberg left the ice with Darcy Kuemper, leaving Brooks Laich out for some one-on-one attention with Pierre Turgeon. Gaborik (knee) took the first loop in line rushes but has not yet been cleared to return to game action, per John Stevens. He won’t play tonight, and while he’ll continue to be evaluated every day in advance of his impending return, it’s looking more likely that next week will begin his countdown clock in earnest. Any chance of seeing him in a game this week is an outside one, but one that does exist. “He’s been out a long time, he’s had lots of work, his conditioning is good, he’s gotten into some full-contact practices now,” Stevens said. “I think the approach with Gabby is if and when he’s ready to play, he plays, and we’ll evaluate each day.”

-Kyle Clifford (upper-body) skated today but is not nearing a return. “He’s been skating quite a bit, actually,” Stevens said. “He hasn’t skated with the team or anything yet. We’re hopeful that time is coming in the near future, but he’s been skating on his own, he’s been progressing along, and if you know Cliffy at all, he’s chomping at the bit. He thinks he could probably play today, but he’s not there yet.”

-After falling behind 3-0 to Vegas on Sunday, Los Angeles will again be focusing on getting off to a good start. It’s a point of emphasis against a Winnipeg team that has outscored opponents 27-16 in first periods this season.

“Obviously, our last game, the start was pretty bad and that’s why we were chasing the puck in the game,” Drew Doughty said. “You know, I thought we could’ve won the game … but that start really killed us. I thought we had the momentum in the later half of the game, so that just shows how important it is. Obviously, [the Jets] take a lot of pride in their starts, so they’re coming into our building and we’ve got to show them that that first period isn’t easy for a road team when they come into our rink.”

If the Kings want to provide a sturdy and sustainable base, winning home games will have to be a part of that foundation. Los Angeles snapped a four-game home losing streak in Saturday’s 4-0 win over Florida, providing a recent reference point of success.

But the Kings were out-shot 15-5 in that first period – their fourth game in seven days, and one that carried an early afternoon start – and will look to demonstrate a hard, competitive mindset right from puck drop tonight.

“It just comes from within,” Doughty said. “Individually, you’ve just got to get yourself ready. The coaches put the game plan in place and they do an unbelievable job at that, they literally make us aware of every single thing the other team is doing. So, if we don’t start well that’s completely on the individual players and as a team, the leaders getting the team ready. And, yeah, that’s just what it comes down to.”

Improving play at home is influenced heavily by a mindset, as many players have indicated.

“When I think of starting the game, I don’t think, ‘oh, my God, it’s the start.’ I just see that I’m trying to play my best every single shift of the game,” Doughty continued. “It doesn’t matter if it’s the start or the end, you know? You’ve got to be ready to go and that’s just the way it is. So yeah it just comes to individual preparation, I think.”

-Meanwhile, the Jets will be without Toby Enstrom, who suffered a lower-body injury in a net-front battle during Sunday’s 5-2 win over New Jersey and will miss up to eight weeks. Winnipeg still boasts a deep defensive group should include pairings of Morrissey-Trouba, Chiarot-Byfuglien and Kulikov-Myers. There’s a good mix of heavy-duty grit and offensive ability in that group, which is expected to play in front of Steve Mason. Yes, it’s yet another back-up goaltender tonight. Mason’s save percentage is a cool .892 over six games, but he has stopped 69 of 72 shots in his last three games and is 4-1-1 with a .941 save percentage and a shutout in his last six versus Los Angeles. Three of those games came with Philadelphia, three with Columbus.

-The Jets have a deep defensive group and improving goaltending – tonight, the Kings won’t see Connor Hellebuyck, who has a .925 save percentage – but they’ve never really been associated alongside the league’s top checking and defensive teams. Over the last two years, they’ve ranked 27th (in 2016-17) and 22nd (in 2015-16) in goals against per game, and 26th and 25th in penalty killing.

But there’s one aspect of their aggressive play without the puck that Los Angeles will have to be keenly aware of: their penalty kill, which has amassed 10 shorthanded goals in each of the last three seasons. Over that time, those 10 goals have tied for second, third and first in the league in that statistic.

Little has changed this season. Winnipeg is tied for the league lead with four shorthanded goals in 20 games.

“I think that there are a lot of teams, and especially them, that aren’t necessarily just sitting back or just icing it and trying to get a change,” Alec Martinez said. “I think a lot of teams are kind of transitioning more to disrupt up-ice, but if they get a scoring opportunity or a rush, they’re going to try to score. They’re not just going to throw it down [the ice].”

The Jets’ penalty killing is otherwise nondescript, ranking 22nd in the league with a 78.4% success rate, but their aggressive special teams unit was highlighted during pre-scouting video sessions.

“They’ve given up 16, scored four [while shorthanded],” Stevens said. “They’re aggressive all over the ice, but they have people that kill penalties that can hurt you the other way. I think a lot of teams – us included – use some really primary offensive guys that are good checking players, and I think Winnipeg has gone that route. They’ve asked their guys to be good checkers as well as scorers, and I think when those people are on the ice, they can hurt you going the other way.”