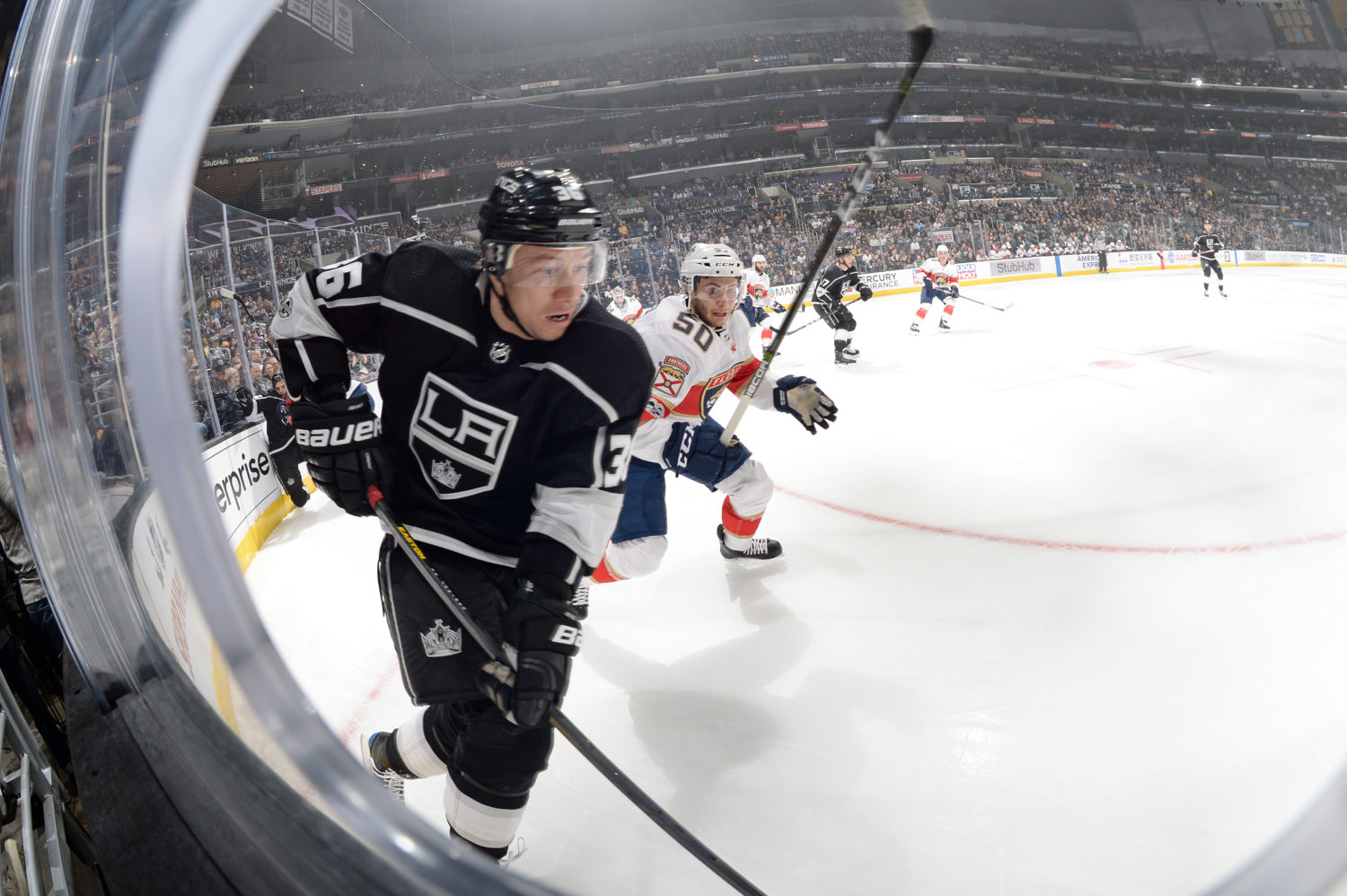 Good afternoon to you from El Segundo, California, where the thermoscope, the forerunner to the modern-day “thermometer,” was invented.

That’s a lie, but these forward groups are accurate:

-Brooks Laich wore a black jersey and skated with the defensemen, all of whom were accounted for. There has been a recent discussion about expansion/relocation markets that has called into attention the potential for bids in Seattle and Houston. I spoke with Laich today about hockey in Seattle – he’s a former Thunderbird who played at Key Arena, whose renovation would provide a preferred site for a hypothetical team – and am planning on speaking tomorrow with former Aero Darcy Kuemper, who can share some reflections on playing in Texas’ largest city. Any ideas on who’d be able to speak on behalf of Quebec City? If I can’t find anyone on the team with a Quebec background, I’m going with LAKI commenter pr0cess.

-It was a lengthy, post-recovery day skate, as would be expected. It was an important practice that came not too long after a five-games-in-eight-days stretch, so there was work in continuing to instill detail while looking internally. “I just think it’s a really good reset day for us today,” John Stevens said. “We got together with the coaches yesterday and just looked at where all the goals-for, goals-against situations are coming from, trying to really get the focus back on the team – where we have success, why we have success, and then just touch a lot of bases out there today in terms of our team game and get some good work in in all three zones. It’s an important week. We just went through a really heavy stretch of schedule there with pretty demanding games every night, so I thought it was a really important day yesterday to get some rest and a really important day today to get some quality work in.” Several drills touched on the ability to handle a forecheck and skate the puck up the ice, as well as a drill that reinforced defensive zone coverage. At the end of the skate, the nets were placed on the goal line and the blue line, creating a battle-type scoring chance converting drill in close quarters. The black and gray-clad participants – presumably those who lost the last drill – skated a few sprints while those wearing colored jerseys formed a semi-circle around center ice to stretch.

-In case you hadn’t heard, Marian Gaborik is “really close” to returning.

-Monday was a much-needed recovery day for Jussi Jokinen, who was acquired from Edmonton last Tuesday in the midst of the aforementioned five-in-eight. He’s still living at a hotel at the moment, so as of today, there was no need to sign a lease and set up utilities and address a number of necessary post-trade logistics.

But by the time he was back at the rink today, it was a helpful full-team practice that afforded the ability to get fully caught up in the nuances of the team’s systems – many of which he was already familiar with.

“I think it’s always a challenge when you go to a new team during the season,” said Jokinen, who has been traded four times in his career, all mid-season. “Obviously, I’ve played a long time in the league, and I watch lots of hockey too, so I’ve gotten to know this team’s identity, how they play the game. But still, lots of details, faceoff place, the lines they use, the forecheck. Getting to know your linemates, and special teams, and faceoff place, all that. So, lots of things to cover, but you just kind of go one thing at a time, whatever is the most important to try to get those … as quick as possible.”

For a veteran who has now appeared in 907 NHL games, there aren’t too many secrets about the type of player he is.

“Not really. He is kind of what I thought he was,” Stevens said. “He’s a really good person, a really high hockey intelligence and capable of playing multiple positions, so I think he’s been a good addition to our team. We’re trying to move him around a little bit and see where he best fits. I’m still not sure that we know that yet, but I think he can play all three forward positions, and I think his hockey intelligence is what I remember.”

-Tomorrow’s opponent, the Winnipeg Jets, are in second place in the Central Division with a 12-5-3 record, and despite last night’s 5-3 loss to Nashville, are getting strong returns from their goaltenders. That includes Connor Hellebuyck’s 11-2-2 record with a 2.45 goals-against average and a .925 save percentage.

From Ken Wiebe’s quarter-pole grades in the Winnipeg Sun:

Hellebuyck has been exceptional, even though there have been a few hiccups of late as he’s given up five goals in three of his past seven starts. However, in 11 of 15 starts, he’s given up two goals or fewer, which is an impressive standard to reach. After giving up 16 goals in his first three starts, Steve Mason has settled into a groove, giving up only three goals in his past three appearances (two starts and a third period of relief against the Vegas Golden Knights. The Jets were looking for stability at the goalie position this season and to this point, this tandem has done just that – especially after an 0-2 start that had more to do with defensive breakdowns than shoddy goaltending.

Discipline was also a concern for a team that finished among the five teams with the most minor penalties taken in each year since 2013-14 and led the league with 374 minor penalties in 2014-15, 25 more than any other team. Through their first 20 games, they’re averaging nine minutes and 56 seconds of penalty minutes per game, the 15th highest average in the league.