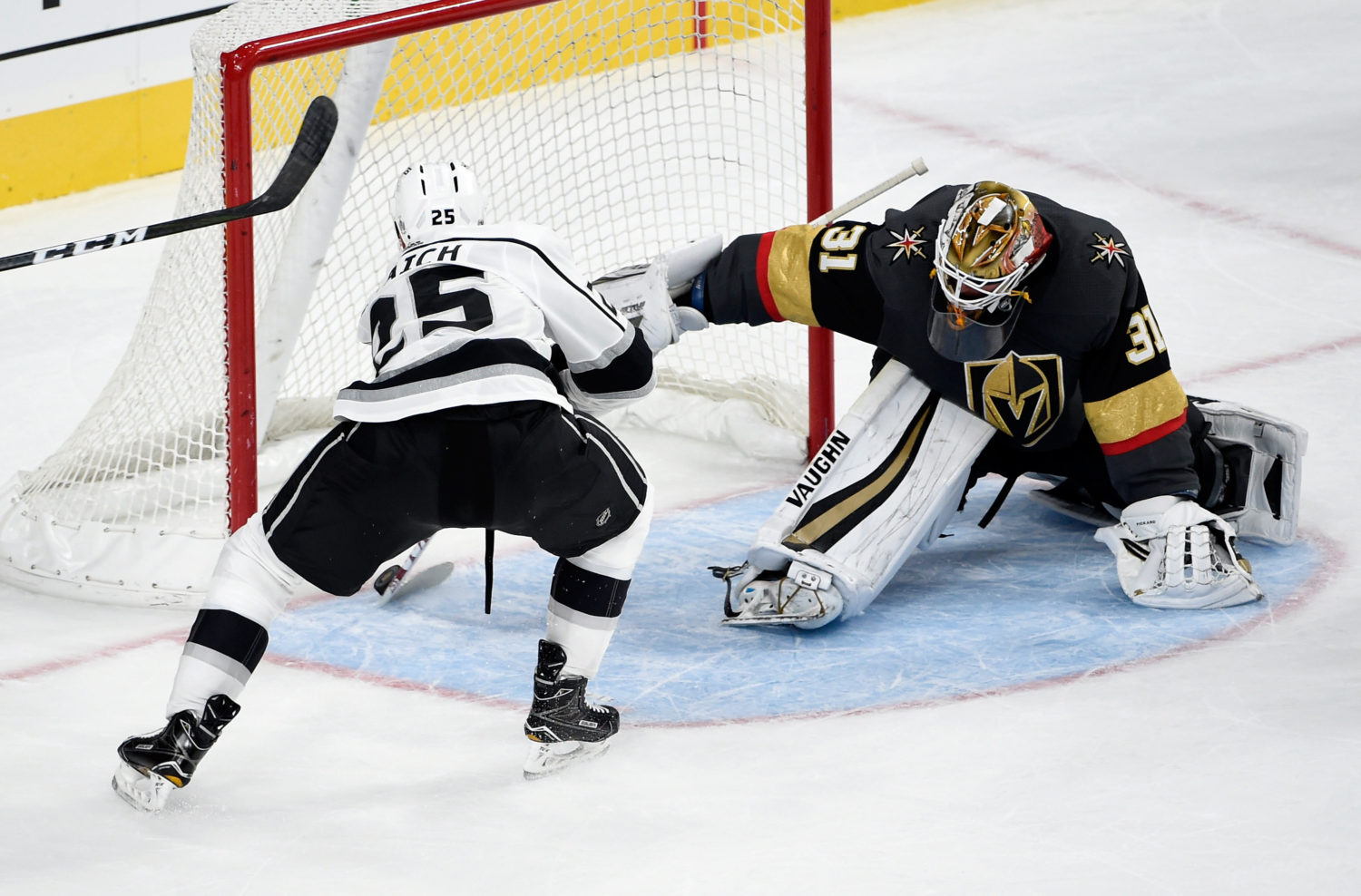 On whether any unique instructions were given to the players in advance of visiting Las Vegas:
Well, I think it would be different if you were spending time here and had a couple days in between games. You’d definitely want to take some extra time and address it, but I think in our case, we play back-to-back games coming here, two afternoon games in a row. I think the guys that live in L.A. have been to Vegas lots on their own time, and I don’t think there’s any need for any extracurricular activities when we’re here in Vegas. This is a big game within the division, so, no, our focus is on the hockey rink and not what’s outside the rink. [Reporter: Would you have a morning meeting at the rink for any 5:00 game, not just because it’s here, just a situational thing?] What we did today? [Reporter: Yeah.] You know what, when we looked at the schedule, it wasn’t anything to do with being in Vegas, it was more to do with a 1:00 game with short travel, so we figured we’re going to get in here for dinner time, guys are going to get a normal night’s sleep. 5:00 is kind of a long day to be hanging around the hotel. Usually we do the meeting at the hotel and there’s that room where you can do a dynamic warm-up. We had a couple guys that we wanted to get on the ice, so it just made sense to bring everybody over here. It’s a short ride. Get everybody up, get everybody moving around, have our meeting here, everything’s here that the guys need, so it was more of the schedule, the way it laid out, than it was anything to do with being in Vegas.

On how he uses game situations on the first game of a back-to-back set to assign minutes:
Well, I think the score of the game sometimes will dictate that, and certainly special teams will dictate that. We didn’t have any power plays yesterday, so that keeps some of those minutes in check. Florida’s a little bit different. Probably more than any other team they have two centermen that play big minutes. Barkov and Trocheck play a combined 43 minutes a night, so we felt we’d have to use our whole line in order to play with pace and check them. I thought Kopi did a really good job – Kopi’s line with the Barkov line. They’re a line that needs special attention. But I just felt that if we’re going to stay up to speed, the way they play, and be able to check and play with the pace we wanted to, we needed everybody. Brodzinski coming in and playing the way he did, Dowd came in and gave us a really good game, Jussi, that line there I thought really gave us a good look and allowed us to roll the four lines.

On whether he was pleased with the first period on Saturday:
Well, I was pleased that with our focus and the way we play that if you watch what happened, we gave up some plays around our net from below the goal line where we had people in position that forced our goalie to make some great saves, and it’s interesting. When your team struggles a little bit, sometimes you have a big save at a key time, and it really allows your team to get some momentum and maybe reset their feet on the ground. I thought Darcy did a really good job of that, and I thought we really locked it down after that. You play a different team like Florida you don’t see very often, you prepare for them, but it’s just a little bit of a different style where they were really good on the rush and they really come at you with numbers on the rush, and they did create some good looks, but it was early in the hockey game, and I thought the performance we got from Darcy early in the game was really key for us.

On whether he reached out to Brayden McNabb when learning he’d be selected in expansion:
We weren’t sure. As soon as we were informed that he was, yeah, I got a hold of him right away. He was actually on his way here. He was one of the players they brought in here. I didn’t reach him right away, but I talked ot him shortly thereafter and I think it was the next day and just wished him well. We feel about him like a lot of the kids on our team. You come up through the minors, he went through the process of becoming a good player, and I think he’s really established himself in the league with us, and now with Vegas. You hate to lose a player, but you’re certainly happy to see him having success.

On what it says about Vegas that they’ve kept pace despite dealing with goaltending injuries:
They’ve been impressive. If you look at their group of forwards, the depth they have up front is impressive. They have four lines that have skill, speed, a little bit of experience, and they play fast. Their team game, I think, it’s really helped their goalie regardless of who’s in net. They don’t spend a lot of time in their zone they get pucks up right away, they play a fast, hard game, they check fast and they play fast with the puck, so I think their whole focus has been on their team game, and I think it’s been really – not easy, but they’ve done a good job of absorbing the injuries they’ve had in net because of the focus on their team game. They’ve been impressive. Everyone says, ‘well, they’re hanging around.’ I don’t think they’re hanging around. I don’t think they’re going anywhere. It looks to me what they’re doing is sustainable, and I think they’re going to be a team that’s going to have to be reckoned with all year.