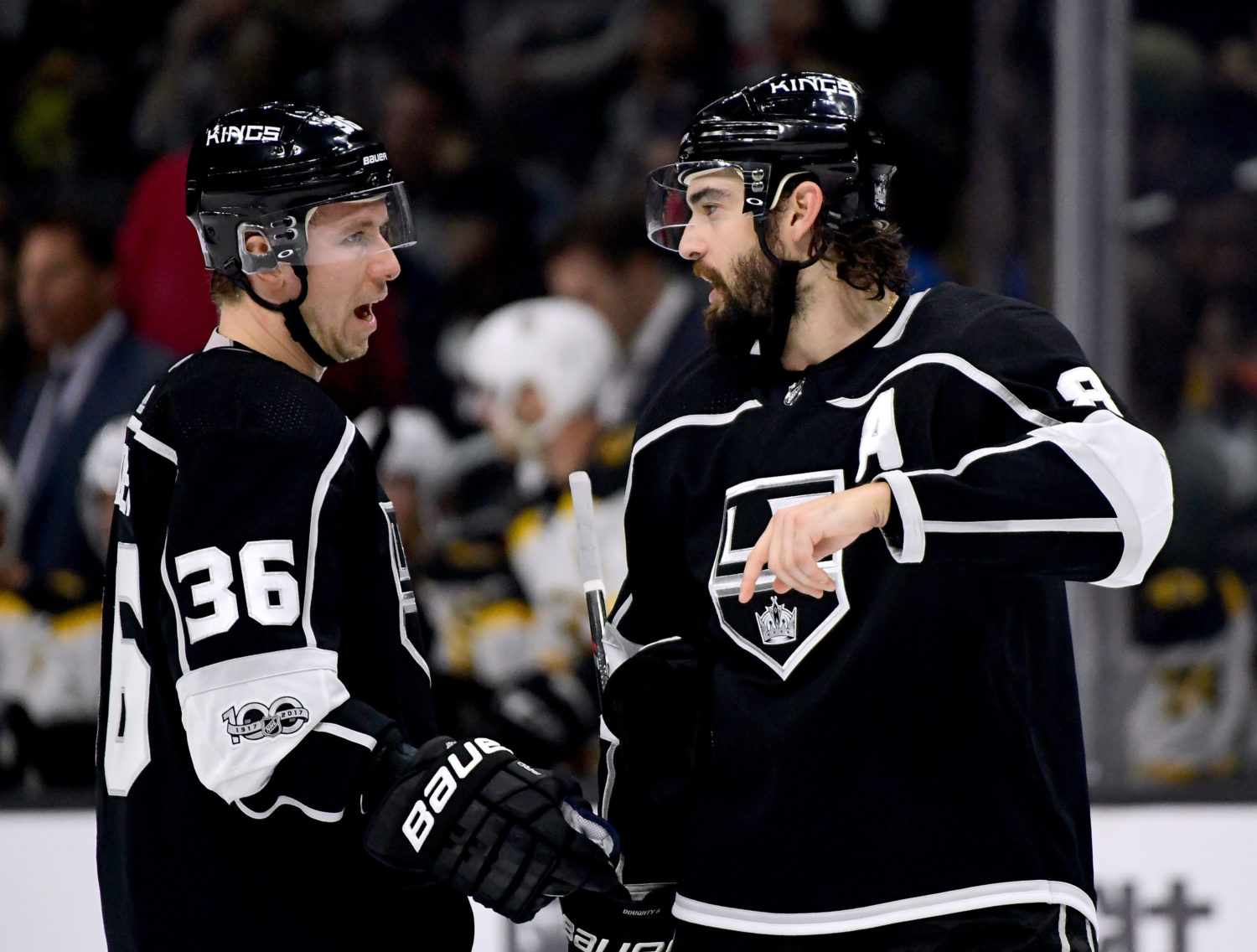 On whether the line adjustments are to try something new up front:
Yeah, I think so. There’s always going to be over the course of the season, whether there’s match-ups you’re facing, or guys just get a little bit stale, sometimes, I think, add a little spark, a little change. Even one change can make a big difference.

On Tanner Pearson generating chances, but not goals:
It’s back to what we were talking about. You put preparation and work together, then you’re going to have a lot of confidence in what’s going on. Tanner’s had chances. I think Tanner’s a guy that we expect to score. I think he’s a bona fide top-six forward. We’re going to need production from him. We’re also going to need a good, 200-foot game. He plays in all situations for us. There’s not a situation in a game that he doesn’t play in, so I think he’s had some really good stretches, and I think he’s had some stretches where he’d agree he needs to be better.

On whether faceoff prowess can be taught to Adrian Kempe:
Yeah, it’s a daily process in trying to get better. It’s a new position to him. He’s made some strides there. Last night he you had a very high-end faceoff team, obviously. Even guys that are good faceoff guys that come up from the minors, it’s a whole other element here. Guys have done it for their whole life. They’re the best in the world at it. We do have the luxury, I think, having some guys on the wings that can help out there. It’s certainly something we try to take advantage of, but it’s clearly an area that he’s worked at, he is getting better at, and he’s going to need to continue to work at and get better at.

On Jussi Jokinen jumping in on the power play:
He’s a really smart guy. He’s played there a lot. He’s played all over on the faceoff, but he’s a very smart guy that reads off the puck. He can shoot to score and make plays, so we just thought that Alex kills a little bit of penalties, Alex has been in and out of there, Cammy was in that spot before, we’ve tried different people in there, but we think he has a skill set to be productive there.

On whether there’s a technique to Alec Martinez’s shot blocking:
It starts here. [points to his heart] A guy that has a lot of courage. I think good shot blockers want the puck to hit them, and Marty’s certainly one of those guys. He’s certainly one of those guys that takes great pride in keeping the puck out of his net. He does have a technique. He’s a little bit different. He turns himself sideways without leaning. Some guys will kind of curl out of the shot lane. He still stays square in the shot lane, but he makes himself big by the way he fronts the puck, and he’s been very, very proficient at it. And he’s worked at it. We’ve got sponge pucks when you get there, and we’ve had iPads behind the shot lanes so he knows where he is. But he’s worked and worked and worked at it, and he’s a kid that’s got a big heart, and that’s why he blocks a lot of shots.

On whether he likes day games:
To be honest with you, I’m more worried about the players and how it affects them. To me, once you get up and get to the rink, we could be in China again and it wouldn’t matter. I think you’ve just got to pay attention to your players and what their day looks like. Instead of having two meals, you have one meal, and when to eat, and all that. It’s always the focus on the players, trying to get them ready to play. But, for me, it’s always been the same. Once you’re at the rink, the time frame is the same. [Reporter: Your predecessor was not a fan of the day games.] You’ve always got to try and evaluate performance in those situations. It’s a different animal. You’ve got to get up and get going, and a lot of times you don’t eat in the morning, you just go to the rink. It’s a different routine and preparation than the players are used to. You can’t just ignore the fact that the time’s at a different time in the day. I think you’ve got to take steps to make sure you’re ready to play. [Those 5 p.m. starts any different from the 1 p.m. starts, or does what you just said apply for anything, regardless?] We’ve had a lot more experience with 5 o’clock, because when we get in the playoffs against Eastern teams, they’re all 8 o’clock starts in the east, so we kind of got used to the 5 o’clock starts. 1 o’clock’s fine. I don’t know if there’s a big difference. 5 o’clock is almost like a regular game. You can skate on a 5 o’clock day. If the schedule allows you to, you can skate at 9:30, and that would feel like a regular day. But it is what it is. We all go through it. I mean, I’d prefer the early games than the 8 o’clock games, to be honest with you.