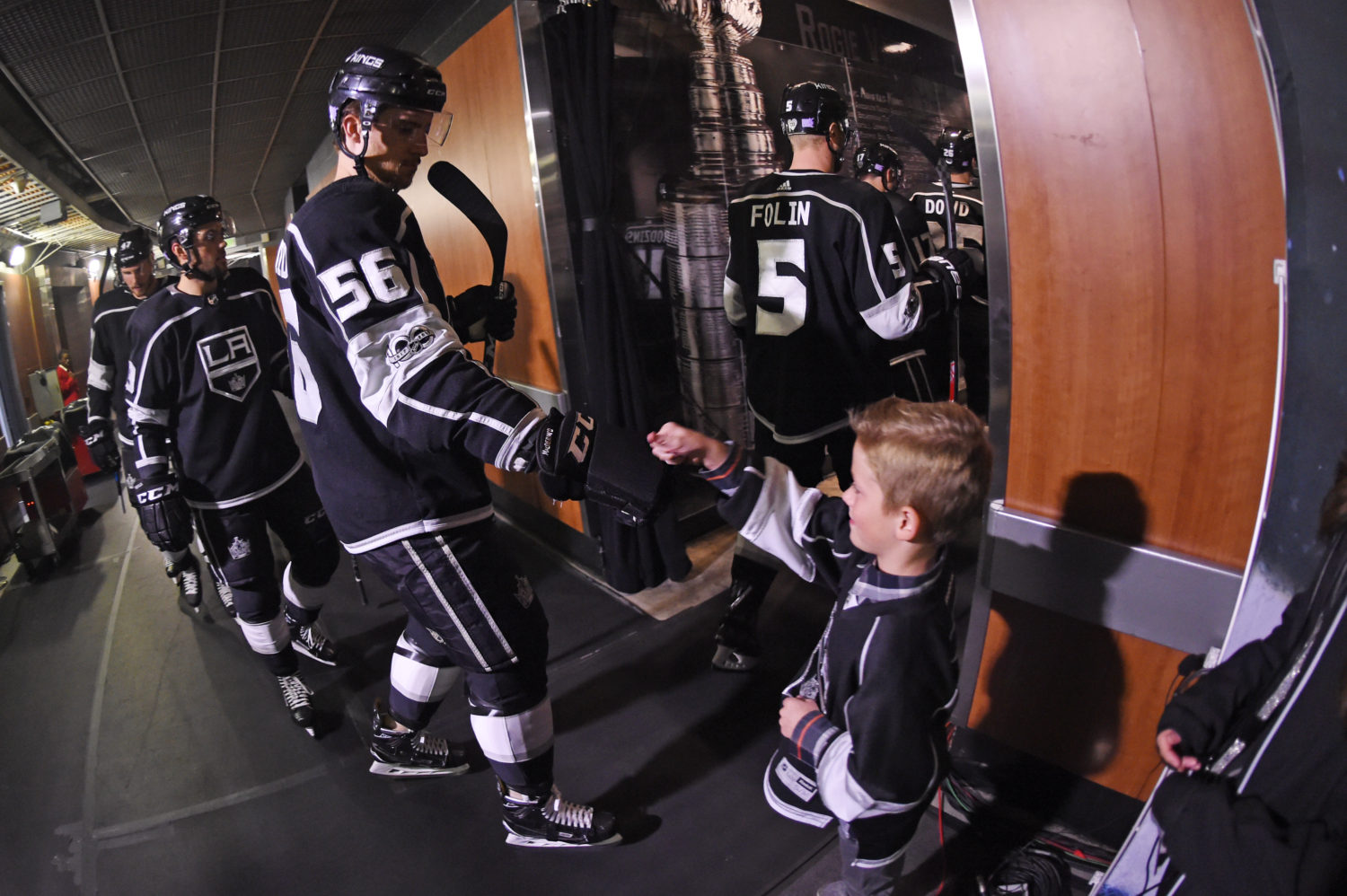 A brilliant afternoon to you from El Segundo, Insiders. The Kings practiced at Toyota Sports Center at 11:00 a.m. on Friday and were color coded thusly:

-Tomorrow’s game is a matinee, so it was a full practice, and the #LAKingsGoalieTweetOff applies. Jonathan Quick left the ice first and is projected to draw tomorrow’s start against Florida (1:00 p.m. / FOX Sports West / FOX Sports GO / KABC 790 / I Heart Radio). The practice ended with an interesting drill in which a player brought the puck out from the corner and competed one-on-one with a defenseman to beat the goaltender. After practice, Gabriel Vilardi got some one-on-one work in with Pierre Turgeon. They were joined for several minutes by a t-shirt, shorts, socks and skates-clad Brooks Laich, who took several loops as Vilardi got his work in.

-On the line adjustments: “There’s always going to be [change] over the course of the season, whether there’s match-ups you’re facing, or guys just get a little bit stale, sometimes, I think, add a little spark, a little change,” John Stevens said. “Even one change can make a big difference.”

-Roberto Luongo pitched a 35-save shutout in Florida’s 2-0 win at San Jose yesterday, so there’s a good potential he’ll get the nod as the Panthers open up a back-to-back set that continues Sunday in Anaheim. He’s been red hot and will carry a personal three-game winning streak into his next game. Buoyed by a .960 save percentage over his last four games, he’s lifted his personal mark to an impressive .927 this season. In the time it took you to read this, the Panthers gave up another six shots on goal. They’re allowing 36.6 per game, the most in the NHL. It could make for an interesting afternoon of hockey, because the raised shot rates have turned into actual goals; Florida averages 3.2 per game and yields 3.6. Three players average better than a point per game, and that doesn’t include 28-year-old Evgenii Dadonov, who has seven goals and 17 points in his first 18 games after signing a three-year, $12-million contract in returning to Sunrise after a successful run with Donbass Donetsk and SKA St. Petersburg in the KHL. Captain Derek McKenzie has missed the last two games with an undisclosed injury, while Jared McCann is on injured reserve with a lower-body ailment.

-I had an interesting chat with Jonny Brodzinski, who did a good job of continuing to establish his game with Ontario after opening the season in Los Angeles. He totaled four goals and nine points in eight games with the Reign and liked the way he was able to once again get into the flow and rhythm of a hockey game. That’s an underrecognized challenge for younger players who may get 18-to-20 minutes at one level, but have to sit for longer stretches when they move up a rung. It necessitates a different type of shift approach, and Stevens was happy with the way Brodzinski performed on Thursday.

“Well, you’ve just got to bring energy,” Stevens said. “A guy like Jonny, he’s not playing special teams right now, but he’s been getting a regular rotation in five-on-five play, and I thought he did a good job last night. He really moved his feet, he was strong on the wall, tried to get in and get stops on the forecheck in trying to get some zone time, so that’s what we expect. Just play with good energy and really be a competitive player around the puck. Take the ice time you’re getting and earn more ice time. Sometimes players, they worry about the ice time they’re not getting instead of the ice time they are. I think every player should worry about the ice time he is getting to get more, and Jonny did a good job with that last night.”

-The issue of Needing To Play 60 Minutes was a topic that was again raised after Thursday’s game. It’s not always the most illuminating observation, because A) there is excellent parity in the league, B) there is another team on the ice working just as hard, which means that C) teams generally don’t rub another team’s nose in it for 60 minutes. There are very few 5-0 games in the NHL.

But it’s not a stretch to say that the Kings have been inconsistent in their recent performance, and against the Bruins weren’t able to engineer a strong start against a team playing across the continent and on the second night of a back-to-back. Several of us asked both Nic Dowd and Stevens about what aspects of a “60-minute performance” that have to be there, given the context that there will always be stretches in which things don’t go the team’s way. Both stressed the importance of starts and special teams.

“Obviously, it’s all important,” Dowd said. “I’d say the starts – it’s kind of where your game trends – and I think your special teams are huge, too. In a league where it’s almost impossible to score five-on-five goals, players are paid and teams are put together to prevent scoring. It happened last night. Drew ties the game up 1-1 on a special teams play. Vancouver beats us 2-1 on a special teams goal. [Against Tampa], we get scored on, challenge, get a penalty for challenging, and then we get scored on again, so we compound the issue, the special teams issue. You want your five-on-five game to be solid, but those things matter.”

John Stevens, on where the 60-minute performance starts, and how it snowballs:
It starts today for tomorrow, honestly. It starts with your preparation and the mindset of being ready to play. If you look at – which we’ve obviously done – we did a lot of good things in the hockey game that was very winnable. We had a desperate team that came in and played really hard, and I don’t think you can do it unless you’ve got four lines and six D putting forth the effort necessary to win hockey games. If there’s a quarter or a third of your lineup that slips, you end up playing just good enough to lose, and that’s what happened last night. [Reporter: In regards to the 60 minutes, there’s so much parity in the league, and so many teams are similar competitive-wise. You’re not going to beat teams, 5-0, every single game. But in terms of getting that strong, 60-minute effort, what percentage of the 60 minutes are fine with the team being on top of its game? Because again, there are going to be mistakes and there’s another team.] We’re going to analytics again, percentages? Really? [media laughs] There were guys on our team that played 60 minutes last night. I thought Kopi was outstanding last night. I mean, the work that he put in, you can’t win against good teams, especially with the schedule and the way it is, unless you’re getting that type of effort from everybody. And there are going to be mistakes. Let’s be honest, right? There are going to be mistakes, and there are going to have to be saves made, and your penalty kill is going to have to do the job. So you look at last night, you need a little more offense in certain situations, a little better job getting to the net. But I do think you want to get off to a good start in the first period, you want to be ready to go. You want to establish the way you want to play. You want to be simple early so you can get pucks behind teams and force them to execute through you, so there’s lots of things that go into it. But to say that the team didn’t play 60 minutes, that’s not always accurate. You just need individuals, in terms of their preparation, to be ready to go from the get-go and not wade into a hockey game to see what the other team’s going to do. [Reporter: So is that more of an individual conversation you have with certain guys who may not be playing a full 60, or is it still keeping it a full, team-effort?] As a pro, you have a responsibility to be prepared to play, and it’s something that we’re very conscious of. Coaches are always talking to the players about it. Really pay attention to young guys – when you’re at home, when you’re on the road, what gives them the best chance? How much rest do they need? How much work do they need? And then collectively as a group with the coaching staff and the leadership group of the hockey team, a lot of focus goes into that part of the game and being ready to play. It’s important. Teams that get off to good starts in hockey – it’s changed a little bit with teams coming back probably more than they used to – but it’s a well known fact that if you get off to a good start in a hockey game, have a really good first period, you have a really good chance to win.

-On the Dowd front, I’m still getting frequent questions as to why the playmaking center has played in only 10 games. I don’t want to make it any sort of a big deal, because I’ve already written on this subject this season, and over 82 games, there will be opportunities for him to showcase his ability more regularly. But, having asked around over the past several weeks, a familiar answer calls to attention his play in the defensive zone. I’m not going into details right now, but if you just look at the statistics, this is a player who has been on the ice for 18 five-on-five goals for and 29 five-on-five goals against in his career even though he has a 57.1% career CF% and no other team forward started a lower percentage of 5×5 shifts in the defensive zone or a higher percentage of shifts in the offensive zone last season. By Natural Stat Trick’s count, he has been on the ice for one high-danger chance for and 11 against this season. He has taken steps towards providing hard, responsible minutes and has been the deliverer of several of the biggest hits of the season to date. He’s always been a tireless worker, and that work ethic will eventually allow his raised skill level to take over. And once his game gets going, that playmaking ability should work well in concert with John Stevens’ plans. He’ll have an opportunity to continue to add momentum to his game when the Panthers visit on Saturday and he likely starts out alongside Jussi Jokinen and Jonny Brodzinski.