November 16 notes: Brodzinski up, Amadio down, Jokinen set to debut 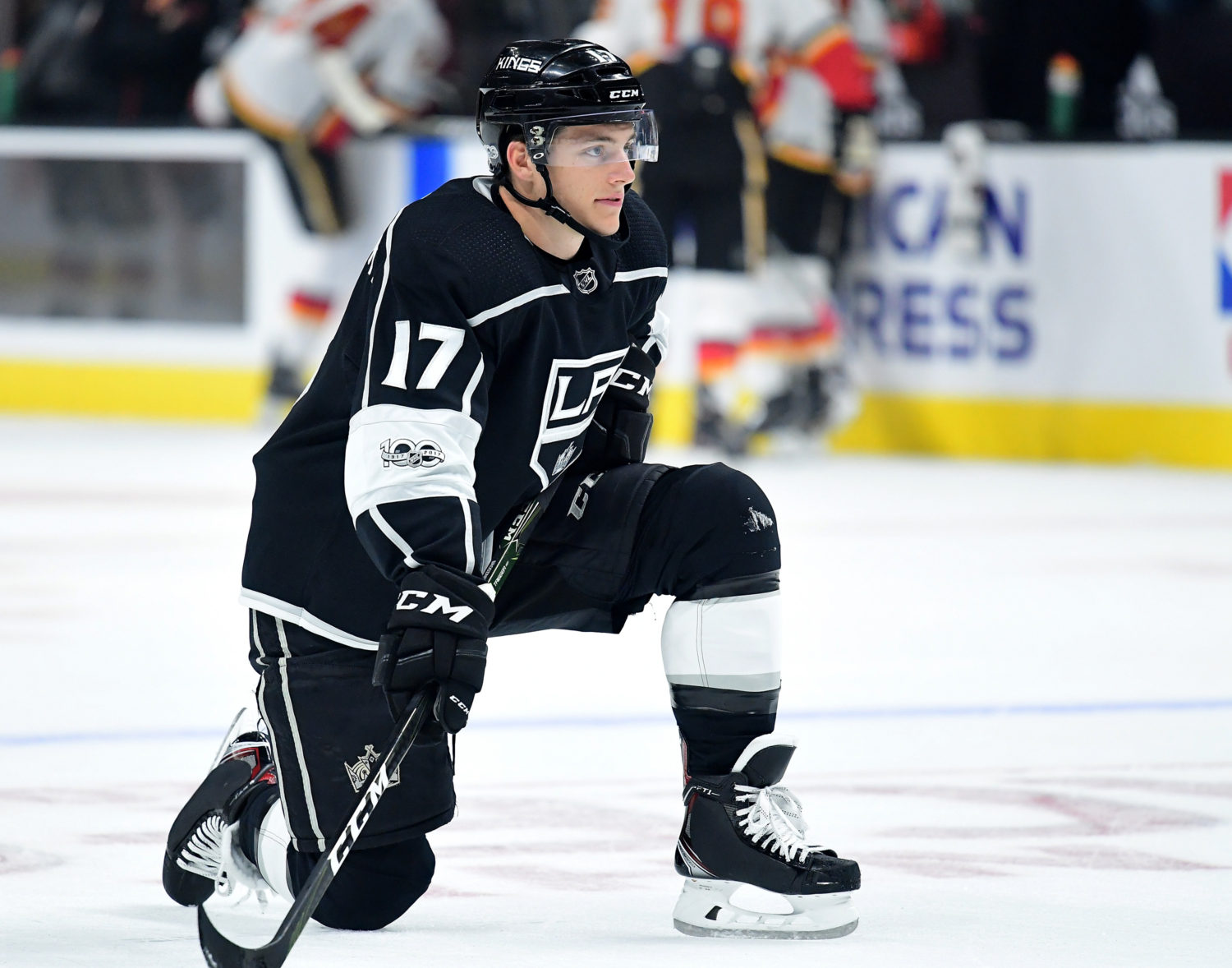 -Extras appeared to be Nic Dowd, Brooks Laich and Oscar Fantenberg, the first two of whom stayed on for extra work with Marian Gaborik and, for a period of time, Darcy Kuemper. Jonathan Quick left the ice first and is projected to start in net against the Bruins.

-As for the Bruins, the Boston Herald reported that Anton Khudobin will get the start in net one night after Tuukka Rask stopped 23-of-27 shots in a 4-2 loss at Anaheim. The B’s will be without Anders Bjork (undisclosed/IR), David Backes (illness/IR), Ryan Spooner (groin/IR), Adam McQuaid (broken fibula/IR) and Brad Marchand (undisclosed), though David Krejci (back) could return from injured reserve tonight.

-Injury notes: Kyle Clifford (upper-body) has taken a step in his recovery. “He’s skated a little bit on his own already, so that’s a really good sign,” John Stevens said. “He’s coming along. I think that point of getting back on the ice is coming.” He hasn’t yet begun the process of slowly becoming integrated into practice, but that would be the next step. Gabriel Vilardi worked with Nelson Emerson after the team’s skate and continued to handle and shoot pucks. I get questions about this every day, but Jeff Carter is still loosely three months away, give or take. He’s looking at potentially rejoining the team midway through the second half of the season and continues to move around in a Roll-A-Bout-like device that keeps his leg angled and elevated. In other news, congratulations to the Carter family!

-Jussi Jokinen is expected to make his Los Angeles Kings debut tonight. A feature story will follow, but Jokinen wore #36 at the morning skate, where he slotted to the left of Andrew Crescenzi and Jonny Brodzinski. He said that he’s comfortable at all three forward positions but prefers left wing, which he has played for the plurality of his 905-game NHL career. “Six years left, three years center, three years right, so [I played] pretty much everywhere around the lineup,” he said. “Whatever they think is the best.” His body feels good, and he believes there’s still plenty left to offer. “Physically, I feel great. Like, I’m not 40. I’m 34. I still feel like I have lots of life,” he said. “I think last year I had a knee injury that kind of slowed me down, but I had great summer training. Six months, and now obviously I had a disappointing stint in Edmonton, but physically I feel great and mentally I feel great. I still love the game, love working hard and love coming to the rink every day, so I hope I have whatever few years left in my time. Obviously I need to get something going here and find a role on the team that can help the team to win.”

The integration into the team’s systems, practices and expectations began in earnest today. “Caught up with him just a little bit,” John Stevens said. “The timing was good, because we had a pre-scout and a meeting and a review of ourselves this morning and had a chance to skate and go through some things, and then sit down with him again here and just make sure he’s clear on all three zones and reads and expectations. It’ll be a process that takes time, but it got started.” More to come from Stevens and Jokinen.

-Meanwhile, Los Angeles made a roster move this morning, recalling right wing Jonny Brodzinski from Ontario and assigning center Michael Amadio to the AHL club. This is a move based on personnel structure and the need for a winger at this juncture, as opposed to a center. Amadio had skated in recent games as a fourth line wing, which isn’t really how he projects. He’ll return to the Reign and continue to be relied upon heavily down the middle of the ice.

“We really liked what he had done in training camp,” Stevens said of Brodzinski. “Thought it was good that he got down and playing, and playing lots again. Michael was here for a period of time. We really liked some of the things he did, but I think his natural position is center, and I think he’s going to be more of a top-nine forward-type of center. I think we had asked him maybe to fulfill a role here just because we liked what he was bringing to our team. Nothing more than just getting Michael back playing lots, getting Jonny up here, who’s more of a natural right winger. Jonny had played well down there. Usually guys go down, they really get some confidence in their game. He’s got a good reference point having been here before, and every time they come back, they’re better players, so we would expect the same from Jonny.”

Brodzinski had four goals and nine points in Ontario after being assigned earlier this season. A 2012 fifth round pick, he has two assists and a plus-two rating in nine career NHL games. Amadio registered one goal in eight games with the club and will rejoin a Reign squad with a 4-6-0-1 record but has points in five straight games.

-Andrew Crescenzi realized a lifelong dream when he took a call from Rob Blake after Ontario’s practice on Monday. After 251 AHL games – and 23 ECHL games with the now defunct San Francisco Bulls – he’d make his NHL debut as a 25-year-old centering Brooks Laich and Michael Amadio.

“It’s unbelievable getting that call,” he said. “A lot of emotions, obviously. But it was nice to get that first one out of the way, and nice that I got my parents out there so I could share that with them.”

The team is high on Crescenzi’s detail-oriented play. He’s not a burner, and he’s not a high-skill guy, but his hockey intelligence, checking and ability to kill penalties and take important defensive zone draws continued to make the coaching staffs in Los Angeles and Ontario take notice.

“I’ve had a coach the last couple years in Mike Stothers down there that’s really put me into an opportunity and told me to play to my strengths, so I’ve really worked on that part of the game,” he said. “It translates well up here, and if that’s what they need, that’s what I’m going to do.”

He didn’t register a shot in 7:06 of ice time and was in the penalty box when Vancouver scored the game-winning goal on the power play, but he won five of eight faceoffs, including three of four in the defensive zone. With a player like Adrian Kempe who has grasped an important two-way role alongside Tanner Pearson and Tyler Toffoli but is not a natural center and is working to improve his faceoff rate, there will be the potential that Crescenzi gets in carves out a faceoff niche with the team.

“Fourth line center is energy, faceoffs, killing penalties, forechecking,” he said. “Obviously, if you can chip in offensively, that’s great, but just focus on the little things like that.”