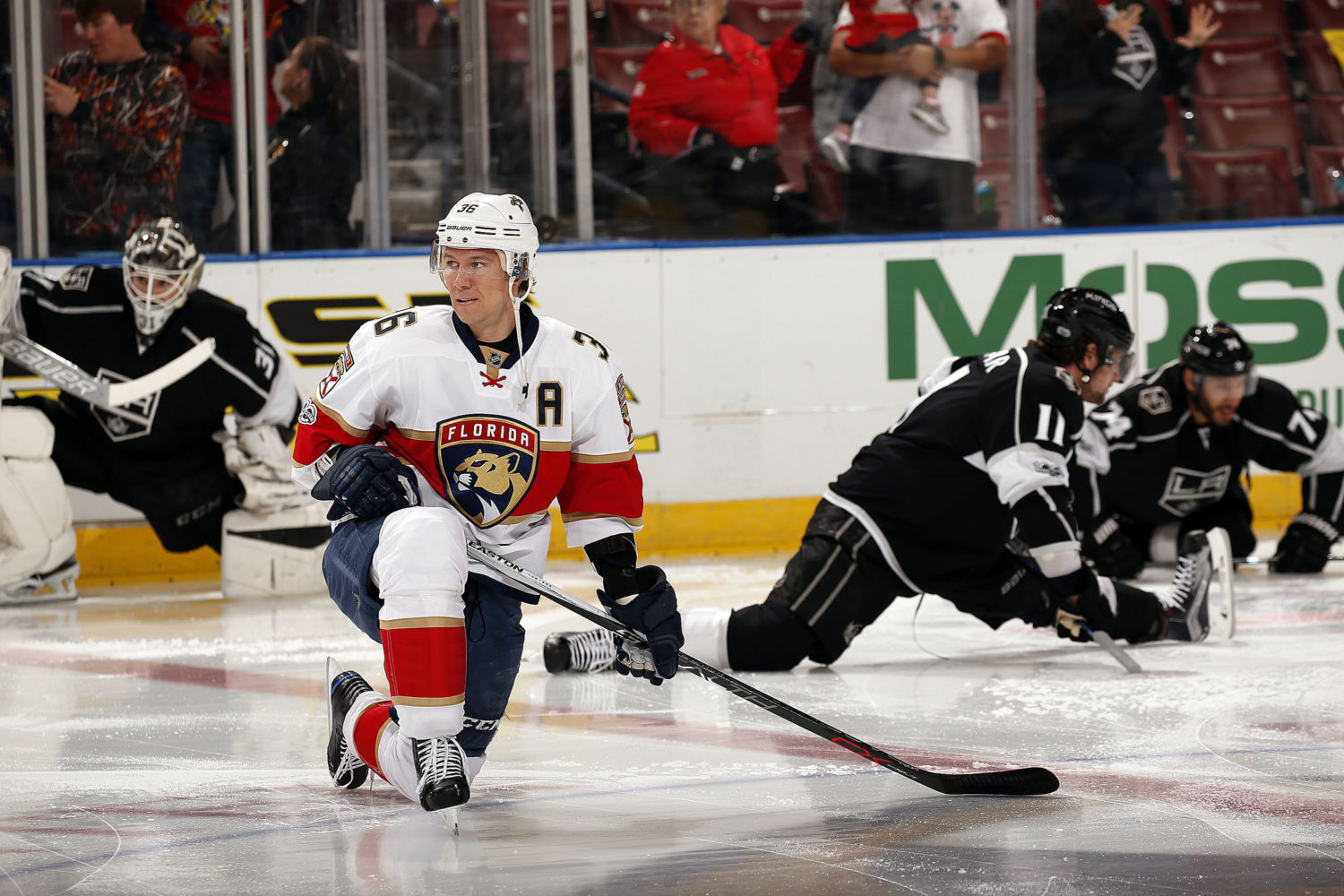 A good afternoon to you from El Segundo, Insiders. The Kings held an optional practice at Toyota Sports Center at 11:00 a.m., so there weren’t any real line rushes. Marian Gaborik continued to skate, but his return is not yet imminent. 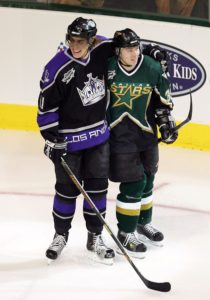 -Jussi Jokinen, shown at right from the 2007 Youngstars Game, is not yet in town. He’s scheduled to arrive tonight. There’s no “clear-cut plan” yet formulated as to how he’ll be handled, but that will be developed quickly.

Where does Stevens see Jokinen contributing?

“I know him as a player before. I haven’t seen him play lately, but he’s just a good, well-rounded, intelligent player,” he said. “I recall he was great in the shootout, but I think he can play multiple positions. I think he’s a really high-hockey IQ guy with a good competitive skill package. It’ll be a good chance to get him on the ice with the guys and make an evaluation from that point.”

-The Kings play the Bruins on Thursday, and while Brad Marchand and Anders Bjork have been ruled out for the game, it’s “probable” that Boston will get David Krejci back. Tuukka Rask goes tonight in Anaheim, so the possibility that Los Angeles faces Anton Khudobin is raised. The last six goalies the Kings have faced: Anders Nilsson, Martin Jones, Peter Budaj, John Gibson, Juuse Saros and Curtis McElhinney. Should Khudobin go tomorrow, that would be the fifth back-up the Kings have faced over a seven-game span. Five of the six home games have featured an opponent entering Staples Center on the second half of a back-to-back. Los Angeles’ high-danger shooting percentage in five-on-five play over those six games, according to Natural Stat Trick, is 5.41%, which ranks 30th in the league.

-The Kings are looking to tighten up their checking and all-zones play. Captain Anze Kopitar is cognizant that they’re also getting different looks than they were some six weeks ago. “I mean, before the season, ‘the LA Kings, they missed the playoffs two out of three years.’ But then at one point, we were, what, 8-1-1? You’re not sneaking up on teams anymore. They’re ready for you,” he said. “Part of it is that, too, but at the same time, we brought that upon ourselves with good play, so we’ve just got to make sure we’re ready to the best of our ability as we can for each and every game. That’s about the grind that we talk about. It’s sustaining that for 82 games. I’m going to say that’s impossible, but you’ve got to do the best you can.”

As for whether the challenges have been more emotional, and based in a team mindset, or tactical, based in schemes and systems, Kopitar said the current challenges are rooted in both. “You go into, let’s say, a defensive zone, and you just want to get the puck back. There are some X’s and O’s, but you really want to go in and grind it out, and then after that, having good support around you so you can make plays. We’ve always been good with that. It just slipped the last few games, and we’ve got to get back to the support and the positioning that we had before.”

-Enough of hockey. Let’s talk soccer. Sweden qualified for the World Cup by dispatching Italy in a two-leg qualification playoff, relegating Italy to the likes of the United States, the Netherlands, Chile, Ghana and Cameroon as teams that failed to qualify for next summer’s tournament.

Naturally, this was a big moment in Sweden, as it was inside San Siro, where the Blågult held the Azzurri to a scoreless draw three days after winning 1-0 on home soil:

The Sweden side crash Eurosport's pitch-side studio as they celebrate going to the World Cup! 🇸🇪 🎉 pic.twitter.com/x0BMN38fYK

This is also a Big Deal for the three Swedes on the Kings roster, one of whom wears #9 out of reverence to Fernando Torres. Before we go any farther, the allegiances are as follows: Adrian Kempe is a Liverpool supporter, while Christian Folin and Oscar Fantenberg support Arsenal. “I know the struggle,” Folin joked.

Those with rooting interests watched the qualifier in a players’ area shortly after a team meeting, and yes, it was taken seriously.

“It’s the national sport. It’s really popular,” Folin said. “I watch it all the time. If I could choose between hockey and soccer, I’d watch soccer.” It’s a weighty sentiment for a player who almost literally has to be pried off the ice after practices.

But in addition to watching, Folin also had to choose between playing hockey and soccer. His father, Martin, played for Frolunda and GAIS in the Allsvenskan – that’s the soccer, not hockey Allsvenskan – before retiring in the mid-1990’s after suffering a knee injury.

“He actually told me when I went to play for [Frolunda HC], he told me that I made the wrong decision, that I should’ve stayed playing soccer,” Folin said. “He thought I was a better soccer player than hockey player.”

He and Drew Doughty aren’t the only really good soccer players on the team.

“Kopi has really good skills. Muzzin has some good skills, too,” Folin said. “I think I’d be a good player, a team player. If we lined up and played the game, I think I’d be the best player out there.”

Like his father, he played midfield. As for Fantenberg, it wouldn’t be a stretch to see him play a similar role on the pitch as Newcastle/USMNT right back DeAndre Yedlin, a pacey and lightning-quick player capable of joining the attack.

He’s close with Bologna right back Emil Krafth, who played in the home leg of Sweden’s advancement past Italy.

Learned today: as much as Sweden is entrenched in the global hockey axis, football is still the most popular sport.

“People are really happy,” Folin said. “Beating Italy was a cool thing and something really special which we hadn’t done in a lot of years. Every time there’s a playoff or Sweden qualifies for the World Cup or even the European Championships, it’s a big deal. Everyone looks forward to it. They played Saturday-Monday. Saturday [at home], everyone was watching and having some beers.”

Anze Kopitar, on how the team resets during mid-season challenges:
Well, you just try and simplify things. … When we get running around a little bit, we tried the long passes and really tried the stretch pass to get us out of trouble, which usually brings more trouble. By simplifying, I mean just supporting each other better and being closer and just get out of the zone like that or coming up the ice like that instead of being spread out and have to make the perfect pass to get the play going.

Kopitar, on whether the team started facing different defensive schemes after their early success:
I can’t tell you that, because I don’t know the systems of other teams. But you’re expecting their A-game, their best game. Whether that’s playing more defensively or forechecking more, it’s really up to their system, I guess. What we can control is our input and our preparation and our readiness and emotion going into the game. That’s going to be the goal going forward.

Kopitar, on whether he has to be aware of managing his performance with the additional ice time:
No, I feel good. I think Johnny’s been pretty good at managing that, maybe getting me on the ice a little more in the offensive zone than we would be in the defensive zone, which is sometimes a little easier. I feel good. It’s not a big deal.

Kopitar, on the nature of the interaction with the younger players that have joined the team:
Yeah, it’s probably going to happen a little bit over time. I don’t think you try and overwhelm him, too, with all the info and all the stuff that goes with. He’s obviously been here for camp, so he knows the guys, and you obviously try to make him feel welcome and everything, but at the same time, you have to let him do his thing and what he does and what he’s done to get here so it’s not that big of a deal. But it’s great. Rotating guys, if you will, coming in, I think it’s good for them and it’s also good for us because down the road – hopefully there are no more injuries and everything – but if you need a guy, he comes in, he knows what we’re all about. I guess what I’m trying to say is you eliminate that wow factor. Coming here, when you really depend on a guy, that’s kind of out the window, and he knows what’s going on.