Instead of simply "hits," what checking-based analytics do the Kings tally? - LA Kings Insider

Instead of simply “hits,” what checking-based analytics do the Kings tally? 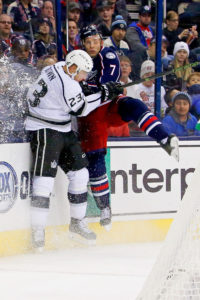 On the NHL’s official event summaries, there are columns depicting a garden variety of statistics for any individual game. They provide a count for shots on goal, attempts blocked, missed shots, and then, sandwiched between the shot attempt statistics and those for giveaways and takeaways is a stat in which no standard is consistently and universally applied in the official count: hits.

“There’s times when I feel like I’ve been very physical and I come out of the game with one hit and there’s games when I feel like I haven’t touched anybody and they give me five hits,” said Dustin Brown, the NHL’s active leader with 3,026 hits, a statistic that was officially introduced in 2002-03 but was not kept in 2003-04.

Nobody is at fault for this. Sometimes those keeping the statistic are placed in more advantageous positions than those who compile the statistic in other buildings. It’s also a subjective stat, and what may constitute a hit in one city might not in another.

“Sometimes where those guys are situated, it’s hard to see the game and mark it, and it’s not very consistent from building-to-building,” John Stevens said. “We have our own metrics in terms of how we’re playing.”

Those statistics kept under Stevens largely depict how the team’s checking play directly leads to shots on goal and scoring chances.

“I think we get paid as hockey people to analyze situations where we’re in a puck recovery situation, whether it’s on a power play or forecheck, but the one thing we do look at now is forecheck success, forecheck recovery success, chances off forecheck, and how those plays happen. How many forecheck plays are you getting stopped in the offensive zone is something we look at.”

Considering the Pacific Division features a number of teams willing to throw their weight around in an attempt to turn over a puck deep in the attacking zone – both the Kings and their opponent tonight, the San Jose Sharks, have demonstrated largely consistent forechecking acumen this decade – it’s a statistic that’s more helpful than simply “hits.”

Interestingly, a Chicago Tribune story last month noted that the Blackhawks had made gains in the statistic. This corresponds, in part, to Chicago, like Los Angeles, no longer possessing the puck to elite degrees as they once did, and you can’t rack up “hits” if you have the puck on your stick all the time.

But by that same understanding, even if “hits” isn’t the most worthwhile statistic, it does say something if the Kings were both a top possession team and a top “hits” team. It reinforces the “heavy” stereotype associated with Los Angeles’ play for the better part of this decade.

But, Los Angeles’ “hits” are down, even as their possession rates have fallen somewhat from their lofty perch. In 2016-17, the Kings averaged 28.3 “hits” per game. This year, they’re averaging 24.1.

“Sometimes your personnel changes a little bit, so that part changes,” Stevens said. “The Dwight Kings and the Jordan Nolans and those guys – Cliffy’s been out of our lineup – those guys have moved on. I think our defense is a little more mobile as a whole, but at the end of the day, when we talk about checking, we talk about feet, stick, body, move your feet to get there, have a good stick when you get there and make body contact. I don’t know if I’d go off those stats. Not to be too critical, but we don’t even look at them, to be honest with you. There are much more accurate analytics that we can use now.”

There’s also the changing nature of the game. When speaking with the players, coaches and those whose careers have spanned multiple generations, there are often allusions to the game being as fast as it has ever been. Mobility, meshed with quick reaction time and ability to play with a raised pace, is more of an asset than the ability to put someone’s head through the glass. The Kings are also making a concerted effort to use their sticks to disrupt plays.

“I think the game is more rubbing guys out than actually hitting guys nowadays. Part of that is how fast the game is, part of that is the rules,” Brown said. “But, again, quite honestly, I think the hit stat is very questionable. And I know I’m a guy who gets a lot of hits, but it’s just a questionable stat period because it’s different guys judging what a hit is, what a hit isn’t.”

“I mean my game, there’s just a lot less opportunity for those so-called big hits. I mean, they’re still there every once in a while. But, again, the game’s evolved. I think my game has evolved. Like, when I was young I think I got a lot of huge hits, right? And it was partly the pace of the game and the opportunity for hits like that were more common. But nowadays, the game is just so fast.”