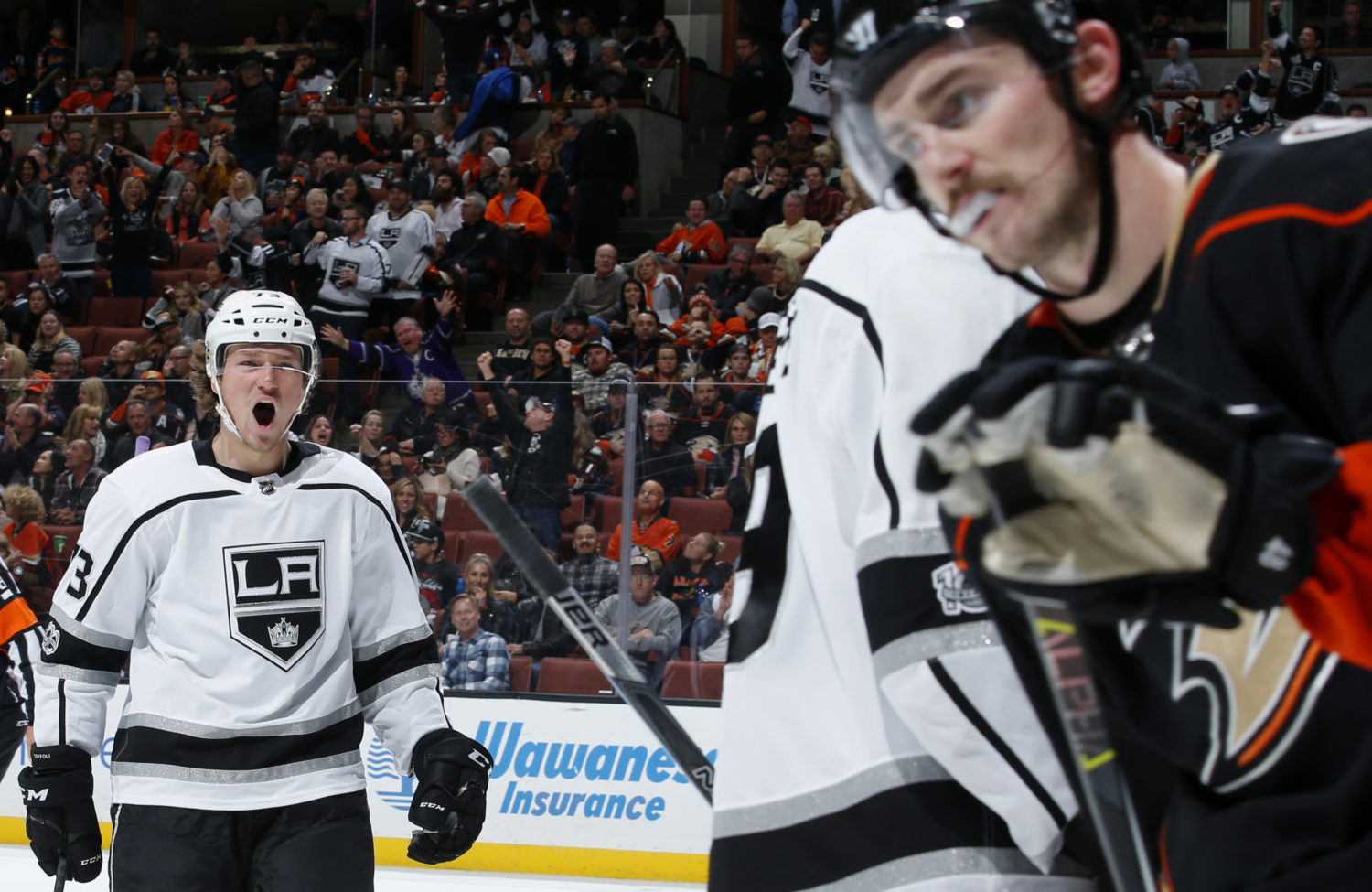 Good afternoon from El Segundo, Insiders. Given last night’s slugfest, it’s not a surprise that the Kings held an optional skate at Toyota Sports Center absent of line rushes. Marian Gaborik skated with the group, but there’s still no timetable yet on his return.

-So, yeah, that game last night. There was still a buzz around the practice facility, particularly amongst media types. The players had moved past it, but Brooks Laich, who spent a good portion of his career amidst the Metropolitan Division constellated web of hate, had some context when comparing Kings-Ducks to the Capitals’ rivalries with the Penguins, Rangers, Flyers, et cetera, et cetera.

That “next one” will be Saturday, November 25 at Staples Center. By then, the aftertaste of Tuesday night’s battle of will and resilience will be a mere afterthought.

“It had a little bit of everything, that game,” John Stevens said. “It probably wasn’t the cleanest played game. I think both teams would like to see their execution be a lot better, but certainly we liked the intent and the emotion in the game and how hard the teams played.”

-The understanding I have is that Kurtis MacDermid will not receive supplemental discipline for his interference major and game misconduct that knocked Ondrej Kase out of the game in the first period. The response I received was passed along informally, but I don’t get the sense that the team views any potential league mandate as the endgame here.

Good news for the health and wellbeing of a pair of Ducks:

-Meanwhile, the Kings could square off against a familiar face tomorrow night when the East-leading Tampa Bay Lightning make their only visit to Staples Center.

Tonight’s Sharks-Bolts game will be broadcast on NBCSN.

-I joined Mike Halford and Jason Brough on Vancouver’s TSN 1040 this morning. Click here for a replay of our chat about last night’s wild game, which certainly had the attention of the hosts, even as the Canucks-Flames game mostly overlapped with it. We also touched on John Stevens, Dustin Brown and Alex Iafallo.

-Andy Andreoff had one of the better games of his Kings career Tuesday night, and though he logged a modest nine and a half minutes of ice time, it resulted in his elevation to skate with Nick Shore and Trevor Lewis by the second period.

The most recognizable part of Andreoff’s performance was his take down of Jared Boll, a respected and honest pugilist with a good reach who was quickly neutralized by a couple of quick right hands that sent him to the ice. According to HockeyFights.com’s registry, it was the 263rd pre-season, regular season and postseason fight in Boll’s career, dating back to his 2003-04 season with the USHL’s Lincoln Stars. Stick taps. Toughness isn’t always measured in fighting, but that’s a tough guy.

“I hit him twice on that shift, and then I heard him say, ‘lets go,’ so I just kind of turned and dropped my gloves, and that’s how it happened,” Andreoff said.

The fight was the most memorable moment of his performance, but it wasn’t the only thing that defined his outing against the Ducks.

“Two tough guys there, and I think Andy did a really good job of managing the game within the game,” Stevens said. “I mean, you see those situations a lot where guys just end up fighting off the faceoff, and I think Andy tried to play the game. He finished a couple hits on the play, and it got to the point where I thought enough was enough, but they’re two tough guys that are pretty honest players, and I think they’re both important guys to their team. But I thought Andy gave us a really solid game, not just because of that. He was one guy that led the forecheck and got in and got some pursuit and some stops, and obviously standing up for his teammates is something that he’s always been willing to do.”

A significant weight in the team’s 11-2-2 start is its team game and ability to bank on contributors from star members of its core to role players on any given night, and though Andreoff hasn’t yet been able to cash in on his opportunities, he’s been able to assert himself on the forecheck, finish checks and wreak some havoc in the attacking end.

“Andy’s been playing exceptional. He’s creating every shift,” Laich said. “One, he brings a physical element, which very few people can do, which as a teammate, you absolutely love and rally around that. But he’s been great on the forecheck, he’s been great in the slot getting shots, creating havoc, putting people on their toes out there, being solid defensively. He always plays through the body, and as a teammate, he’s one of the guys that everybody absolutely roots for, so it’s awesome to see him do really well.”

Like any member of the team, his success starts with his defensive zone checking and being strong on the walls, which he noted as a vehicle that will continue to gain the coaches’ trust.

“Every time I want to get out there, I want to create energy or momentum or something like that, and I think I did a good job, and hopefully I can build off that,” he said.

He’s often been able to showcase those abilities, plus an underrated release around the net, in practice situations. Andreoff is still looking for his first point of the season, but Tuesday’s game at Honda Center was the most developed his performance has been in game situations this season.

“I think the Anaheim games are always pretty fun. It’s kind of a playoff atmosphere,” he said. “There’s a bunch of Kings fans there, so I think that’s my type of game, and I thought it was a lot of fun.”