I spend a lot of time on Twitter. It’s part of the job description. Over 82 games, there are highs and lows. One of the highs – and, I must say, this isn’t an extensive list – is tweeting out, once or twice a year, my favorite question. I mean it only out love and frivolity, and not ridicule. “What will Kings fans complain about when their team is up, 5-0?” This sounds a bit harsh and condescending, but yes, this does happen. Like, the Kings could be boat-racing a top team, and within a minute and a half of the fifth goal, I’ll receive a complaint that Nick Shore is playing over Nic Dowd, or that Jonny Brodzinski is still in the AHL, or that some player something something should’ve made it 6-0. How dare they! Reporters love pressing their @ button and reading these observations. I was prepared to type my favorite question last night, had even spruced it up to fit comfortably in 140 characters, and was flexing my index finger above “Tweet” when Auston Matthews mishandled a puck during a breakaway on some soft Staples Center ice with Anze Kopitar’s stick in the same zip code as his hands, and a controversial penalty shot was assessed by the referee that hadn’t fallen and appeared to be well behind the play. (On the only slowed down replay I saw at the time, I thought I had seen Kopitar’s stick brush against Matthews’ hands, but after an additional 10 or so post-game viewings, I, like everyone, couldn’t find any contact.) Some 10 minutes of real time later, Kings fans had a legitimate Twitter gripe in a game that was once a rout. Former Selke Trophy winner Anze Kopitar hustles on the backcheck and impressively *does not commit an infraction* and one of the league’s brightest superstars is gifted a penalty shot, which he converts. Lesson learned: even in a 5-0 game, poke the Hockey Gods at your own risk. Against a team that has Toronto’s firepower, the trajectory of a game can change quickly. 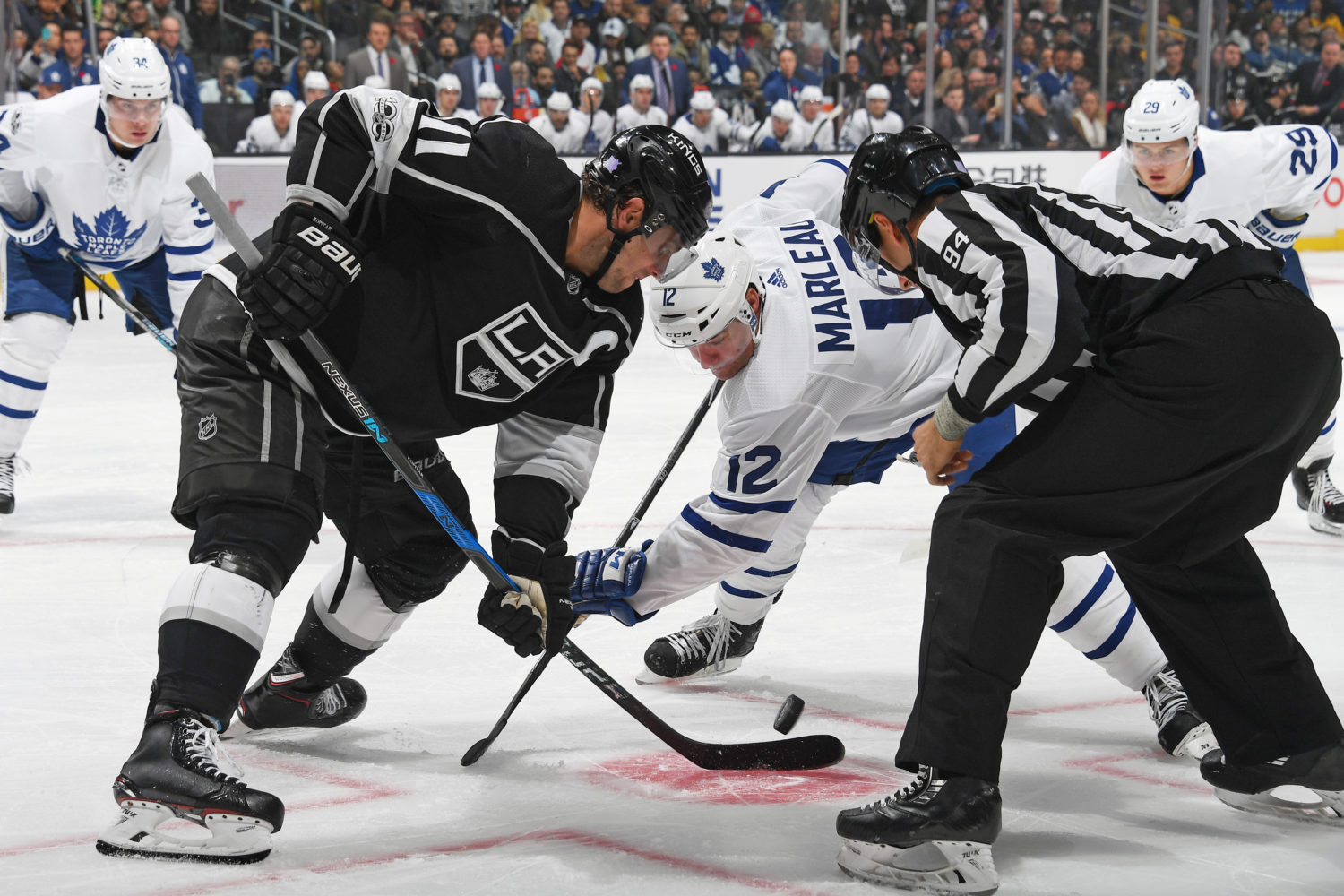 Teams, coaches and players are wary of the first game at home after an extended road trip out of concerns of potentially passive play due to the relaxation and reset of returning home. Perhaps colloquially, there’s not always great jump from the get-go in that first game back. Such a start wasn’t a concern at all for Los Angeles, which took advantage when Michael Amadio’s first career goal (assists: Tanner Pearson, Staples Center Ice) was backed up by Michael Cammalleri’s power play will-in after impressive movement down low by Anze Kopitar and Dustin Brown. Teams need power plays to score big goals, and yes, when a power play establishes a multi-goal lead less than five minutes into the game, that qualifies as a “big goal.” Cammalleri then kickstarted a third goal when he read a play deftly, jumping into the offensive zone to intercept Nazem Kadri’s Nick Shore-contested outlet along the boards before feeding Shore, who picked the perfect moment to find Trevor Lewis, who ran a quick route to find the most dangerous spot on the ice from which to score on that play. The Kings ultimately made it 5-0 in the second period, and yes, score effects took over at that point, but once the game got away from Toronto, even before Matthews’ penalty shot, Los Angeles’ game had some areas that could stand to be cleaned up. This mostly goes back to the understanding that You’re Not Going To Step On A Team’s Necks For 60 Minutes, Especially A Good Team Like The Maple Leafs, but after the airtight lockdown game against Boston and a gritty effort in the loss at St. Louis, the Kings yielded more opportunity than they’re comfortable in doing over the second half of the game. 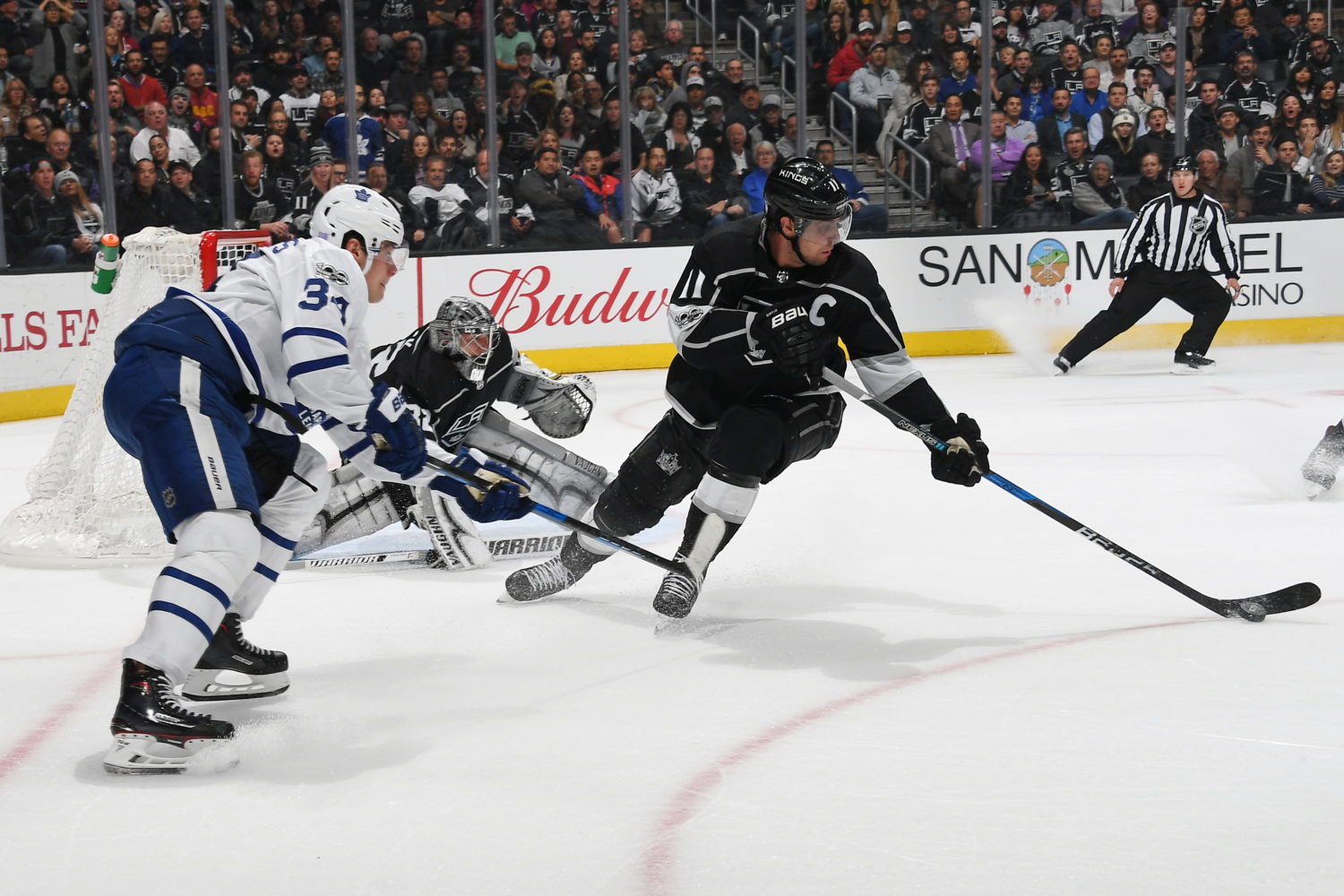 Adrian Kempe is wholly unrecognizable from the player he was in Ontario and during his first Los Angeles stint. John Stevens has not been shy in articulating his desire for the centers to attack the center of the ice with speed, and Kempe’s ability to lower his shoulder and hit a seam between Nikita Zaitsev and Jake Gardiner was like watching a running back sense daylight and power through a pair of flat-footed defensive backs well past the line of scrimmage. He even drew a penalty on the play before dishing to Tyler Toffoli, who more or less had to shovel his stick towards the net for an easy chip-in. Such a play is in line with the hard, physical, competitive minutes he’s etched out with his linemates, all of whom are benefiting from some impressive shared chemistry. He’s not winning faceoffs yet, but he’s checking well and using size and strength as assets, and for someone who turned 21 years old a month and a half ago, that’s awfully impressive. Now’s the time to buy stock in whichever company triple-stitches the number nine onto Kings jerseys.