Good afternoon from El Segundo, the City of Brotherly Love. Today the Kings practiced at 11:00 a.m. and aligned as such:

-Nic Dowd wore a black jersey and skated as a fill-in with the defensemen. In other words, there were no changes from the lines and pairings used at even strength against Toronto on Thursday. There was quite a bit of transition, pace and skating work, some of which appeared to be used to set up power play entries.

-Of note: Pekka Rinne, who turns 35 today, is expected to draw the start for Nashville in Anaheim tonight, so the likelihood that Los Angeles faces Juuse Saros is raised. Saros, 22, is the heir apparent to the crease should the team ultimately part ways with Rinne in the semi-foreseeable future, and while that’s very, very difficult to fathom, Rinne’s seven-year, $49-million contract expires after 2018-19. Saros, who was 10-8-3 with a 2.35 goals-against average and a .923 save percentage last season, is winless in three starts with a 4.36 GAA and .817 Sv% this year.

-Trevor Lewis, long noted for his responsible play and 200-foot judiciousness, punctuated the first period barrage by beating Curtis McElhinney after a pair of Nazem Kadri turnovers. With four goals on the season, he’s well on pace to surpass last season’s career-high of 12.

Such positional acumen isn’t limited to the harder areas or spots in the defensive zone. On both Kadri turnovers, Lewis quickly skated to a soft spot to the left of the slot where damage could be inflicted. On the second turnover, as soon as Cammalleri stepped into the zone to pick off the clearing attempt, he created space from Jake Gardiner, who attempted to play the pass but couldn’t break it up, received Shore’s feed through Gardiner and Nikita Zaitsev, and wristed the puck from a sharp angle into a mostly open net.

“I kind of knew he was backside the whole time, so I was just kind of looking for him to open up,” Shore said.

It was a play that had roots in the final minutes of practices, when players remain on the ice to handle additional pucks and to reinforce scoring and retain skill. Lewis said it was a play they’d connected on a number of times at the end of practices. John Stevens acknowledged the natural chemistry between Shore and Lewis after the game. The partnership has been strong this season even as they’ve skated with Kyle Clifford and Michael Cammalleri as left wings.

Shore, who missed the previous two games with an undisclosed injury, was effective in his first game back in the lineup. He was happy that his line was able to generate “a decent amount” of scoring chances in the 5-3 win.

“Only executed on one, but I thought the looks were there,” he said. 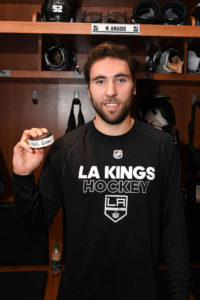 -After Thursday’s win over Toronto, Mike Amadio retrieved his phone, which was literally buzzing. He received numerous wishes of support from his close friends, his parents, uncles, his brother and sister.

At what point did it really hit home that he had scored his first career goal?

“When I saw the highlights and seeing all the guys I was on the ice with were just as excited or maybe even more excited than me, I think that’s when it hit in,” he said. “It was a pretty special feeling.”

Amadio played in the Ontario Hockey League, but he and his brother were Colorado Avalanche fans, and his father was a New York Islanders fan. His favorite player was Joe Sakic, and though he never posted junior seasons of 60 and 78 goals, as Sakic did during his 17 and 18-year-old seasons with the Swift Current Broncos, Amadio did hit the 50-goal barrier during an impressive season as the North Bay Battalion’s captain in 2015-16.

Amadio always had a reputation as a defensively-inclined forward with the propensity to score, but his ability to bury the puck during his 19-year-old season was brought about when he gained more confidence in his shot.

“My first couple years, I was always pass-first and maybe not taking the opportunity to shoot the puck and score,” he said. “I think the biggest thing for me was just shooting whenever I got the chance.”

That transferred into a strong debut for the Ontario Reign, with whom he totaled 16 goals and 41 points in 48 games last season. It’s not easy to make the leap into professional hockey as a 20-year-old, but Amadio was pleased with how the season unfolded.

“Yeah, I think I had a pretty good year last year,” he said. “I had a slow start adjusting to the league, and then when I got a little more comfortable I started playing my own game, and it went forward from there.”

It resulted in Brooks Laich, playing in his 771st career game, retrieving the puck shortly after the goal celebration.

“He was a great linemate last night,” Amadio said.

–Unless you had been, um, sent to Belize over the summer, you had most likely heard John Stevens’ desire for the team to hit the center of the ice with speed. “I think part of our identity as a hockey team has to be that the LA Kings are a team that goes hard to the net, and quite honestly, if we lead the league next year in coaches challenges for goalie interference, I’d be really happy about that,” Stevens memorably said at his introductory press conference.

“I thought it was just a great all-around play,” Stevens said. “It was one of the plays that was fun to watch last night.”

The net-front drive has been something that Kempe should be particularly equipped to replicate. He’s not only got the speed to be able to create havoc on the attack, but he’s also shown a willingness to go to hard areas and use his six-foot-two frame as an asset in protecting the puck, as he did in hauling towards the net.

There is so much chaos in hockey with moving parts and the spectacular ability by players to simply read and react without wasting any precious milliseconds of action. Is there a reminder in Stevens’ voice that goes off in his head when an opportunity to drive to the net presents itself, or is that something that’s simply innate?

It’s the type of play that has Kings fans glowing when they consider the skill-speed-and-size package of the center who recently turned 21 and now has 10 points in 13 games.

“Well, that’s one of the reasons why we want him at center ice. He carries a lot of speed in the middle of the ice,” Stevens said. “He’s willing to take pucks into traffic, and it wasn’t just him. There were a lot of other people getting to the blue paint. That whole line – Tyler took a guy on his back to the net, Tanner took a guy on his back to the net, so it’s certainly something I think we need to continue to push. If you’re going to get to the net, you do it a couple different ways. You drive middle lane to get there, and you put pucks on the net and you arrive there. I thought that was a big-time play there with traffic. Not only did he protect the puck and get through the hole, he had the presence to make a great play to Ty, who stayed with him and drove the back post.”