Stevens opens up on checking, analytics, scoring chances, much more 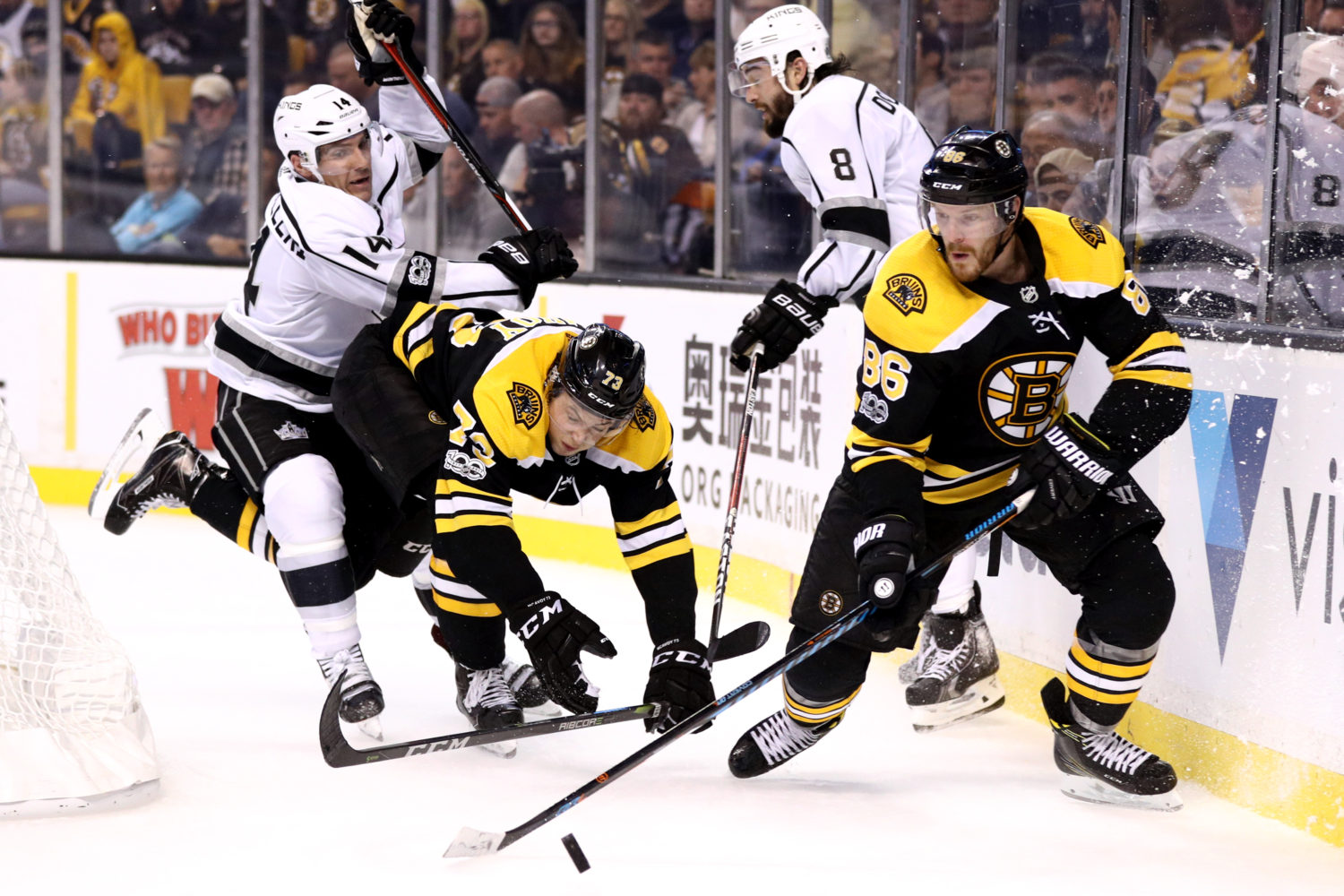 Instead of practicing at the Scottrade Center in St. Louis on Sunday afternoon, the Kings held off-ice workouts and team meetings in preparation for a road trip finale against a 9-2-1 Blues team. After holding meetings, John Stevens held court with broadcasters and assembled media and answered questions on a variety of topics related to the team’s breakthroughs at the start of the 2017-18 season.

On whether the team is still “glowing” after Saturday’s win:
You know what, I think obviously it was a pretty emotional win. The guys really enjoyed what happened. I think when you play that hard in a hockey game, ultimately you want to win. That’s what makes it fun, and I think when you win in that fashion, the guys were pretty exuberant. It was a tough game. It was a really tough game. It was an entertaining game to watch, well played by both teams, so to win in that fashion, I think it was pretty exciting for the team. [Reporter: Was it the first game of that style this year?] Well, we just went over it this morning. There wasn’t a whole lot of rush play from either team. It was really a forechecking – we called it a ‘man’s game’ last night. It was some pretty tough hockey in the trenches from both teams there, and I was really pleased with the way our team responded.

On whether he expected a lower-scoring, tighter-checked game five games into a road trip:
Well, it was lower scoring, but we were really focused on trying to get our chances against down. We don’t think – we know – we gave up less last night and created a lot more. We had more chances in that game than we had in the Montreal game, and from playing the game the right way, so it just kind of adds to the philosophy that you can create offense and still be good defensively. I thought we were, but I just really liked the way our team game created offense for us and didn’t take away from what we were trying to get done defensively. Obviously very little special teams in the game, so it became a five-on-five game. I just think each step, with the road trip or not, I think each step we’re trying to get better. We want to get those chances down and we want to continue to try and create. That was a really good test for us last night.

On Adrian Kempe’s line’s performance:
We thought they were terrific. They played hard. It’s not surprising Tyler ended up scoring two goals. He was involved in everything physically. Adrian was one of our more physical forwards last night. He was getting on top of people. We want him making contact. It’s not always about running a guy over, but it’s about forcing a puck out of his hands, and we thought that whole line was terrific.

On what the team focuses on in trying to cut down on scoring chances against:
There’s a lot of things that come into it. It just comes down to winning puck battles. They came out after us hard early. We want to take away time and space. We want to play above teams. We want to play inside teams, so you want to be a good checking team, it’s been around forever. You want to be on the right side of your man, but then you want to play fast, and I thought last night we played fast without the puck. We closed on teams in a hurry, we forced pucks to get turned over, and when we didn’t have it we were looking to get it back quickly, and you’ve got to get involved physically to do that. We keep talking about playing fast, well, you’ve got to play fast defensively, too, and that means getting on people quickly too with the proper support, and I just thought our detail and our support was really good last night. We didn’t have man-on-man situations all over the ice. We had really good support with the man making contact with the puck carrier.

On what he sees in the St. Louis Blues:
A lot like us, to be honest with you. I think the thing they’ve really relied on is their team game, and they’ve got a great spirit about them. Their goalie’s played great. They’ve had a lot of injuries – probably as many as any team in the league – and they’ve just had other guys step up with a real focus on the team game. If you look at last night’s game, all their workers scored for them. Upshall, Brodziak, Edmundson, so they’ve got all those guys. Sobotka. It’s not surprising. I think they’re the kind of team that they’re not waiting for one guy to carry ‘em – Tarasenko – and they’re going to beat you with their team game. It’ll be a big challenge for us.

On finding “teaching” moments after the Montreal game, despite the 4-0 win:
Yeah, and you know, the Montreal game, we actually had people in good places. We didn’t get pucks to the net when we had people there. We didn’t handle their forecheck very well, that was just the bottom line. They come really hard on the forecheck and we didn’t handle ‘em very hard. Boston comes really hard. Boston and Montreal, we have the luxury now, we have deep underlying analytics, not just the shots for and against that you see and attempts blocked. It’s almost going back to, what was it, Bill James came up with the baseball abstract? It becomes much more pointed statistics that can tell you what’s going on, and we have those now, so we don’t care about the other stuff. We care about the stuff that matters, and Montreal and Boston are two of the top forechecking teams in the league in terms of creating chances off the forecheck, and it’s not surprising. They’re really good on the forecheck, they’ve got smart guys, they work hard, they get pucks turned over and as soon as they’re turned over they go into your net. We didn’t handle it very well in Montreal, and I think it cost us the other way and we gave up too much. We handled much better last night in terms of getting pressure early and then getting pucks stopped and going the other way quickly. But we really created a lot off our own forecheck last night. If you look, and I don’t want to get too deep into it, but there are metrics that we can use now that tell us, ‘OK, we’re getting these looks in areas that we know are dangerous.’ How are we getting those? We’re getting from pursuit, pressure over top- [Reporter: That’s all tags, right? When a chance is created, it’s ‘tagged’ as it’s in this area-] It’s kind of – I don’t know how I’d say it, maybe a vague thing – if we don’t create enough from the middle of the ice, well, you can have the puck a lot, but so now, we’ve always said along, last night wasn’t a rush game. They’re a very good checking team in the neutral. They don’t give you the rush. We still had good things going on the rush, people going there that led to O-zone play, so it still makes teams forced to defend the middle of the ice. But being able to get shots and chances that are pass-outs below the goal line, people in the blue paint, lots of traffic around the net, we track those ourselves, but we can have analytics that tell us. It’s a good metric. If you can measure it, then you can hopefully improve on it, right? And I think we’re getting to the point where we can measure it a little bit.

On getting pucks back and playing fast:
I think that’s always been something here where we want to play fast, take away time and space, and I think that’s why we’ve always been a high possession team. That hasn’t changed. Like, you want to get the puck back as quickly as you can. Everybody wants to play with the puck. Well now, what we’ve tried to create is a real mindset that when we do get the puck back, we’re playing fast the other way where we’re moving to space, we’re thinking of getting pucks up to speed. But certainly, playing fast without the puck is paramount in today’s game. Boy, there’s not a lot of time and space. It’s a competitive environment. You’ve got to play fast, but the puck battles, we’ve seen it where the compete on the puck and dot-to-boards is still a very important part of the game.

On the team’s play in both tighter-checking games and more open games from earlier in the season:
I think we’ve been very comfortable in those games. Even last night was a tight game the whole way through. I think we’ve gotten key saves at key times from both goalies. Certainly, I think that our goaltenders have given us a chance to win every night. But I probably had the Brooks Laich line out there with Cammy and Lewie last night at the end of the game in our own zone and full confidence they were going to get the job done, and they did, too. So, I think a real key for us is we’ve been able to trust everybody in our lineup. Obviously, there are going to be match-ups you’re concerned with along the way, but going on the road where the other team’s got the last match-up, you usually look at all of our lines and they’ve done a really good job of being responsible. We feel comfortable we can play in those situations. Even in Columbus, there are tight games there. The Montreal game at home was a 1-1 game until we blew it open, so stay with the program and play the game the right way until the buzzer goes at the end of the game, and hopefully it’s good enough to win.

On any reasoning behind not generating a surplus of power plays:
Not sure. Going into that five-game segment, going into last night, we had 19 kills and 10 power plays, so that’s a ratio you don’t want to continue. And then we thought if we’d handle the forecheck better and we do more things going forward, then maybe we’ll take less penalties and draw more. We did talk to our fourth line coming out of the game the other night where each of the guys on the line had a penalty. I don’t know if I agreed with all the calls, especially Amadio’s call, but at the end of the day, that’s six minutes of penalties from a line that you’re hoping that’s going to give you a real quality 10 minutes in the hockey game. It’s not a big concern because I think we’re playing the game the right way. If it’s a physical penalty, if it’s a game penalty where you’re negating a scoring chance just by playing hard the right way, I think we can live with those. I don’t know – we haven’t drawn a lot of penalties. I’m not sure why. But I don’t see anything that would tell me that we’re doing. We were at the net a lot last night, we took people hard to the blue paint, we were competitive on the puck down low. Sometimes it’s a compete issue – you’re not drawing penalties. I don’t think that was the case last night.