Oscar Fantenberg has been a valuable and versatile addition to a Los Angeles Kings team that has banked on his crisp puck moving and pace-setting skills. The team appears more comfortable with his match-ups at home, where he has averaged 16:03 of ice time through five games, than on the road, where he has averaged 12:01 over four games. Overall, with four assists and an even rating through his first nine games, he’s been a good fit at even strength and on the power play for a club that enters tonight’s game at Montreal with a 7-1-1 record.

After Los Angeles’ morning skate, Fantenberg shared additional details on his background and the work he put in with KHL-Sochi last season. 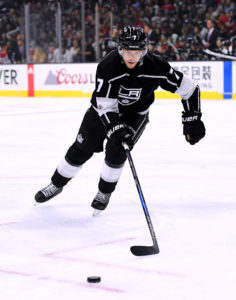 LAKI: Did you learn French, or are the two languages you know Swedish or English?
OF: You could choose Spanish, German or French.

LAKI: What did you choose?
OF: Spanish, but I wasn’t that good at it. I was there for like a year, so I can’t speak Spanish at all.

LAKI: So you can’t go into certain L.A. neighborhoods and be fluent?
OF: Oh, no, no, I can’t. That’s a language I’ve just forgotten.

LAKI: Most of your friends and most of your classmates back then, did they choose German?
OF: Yeah. German, I think, is the easiest one. That’s a little bit of the same as Swedish – some words and stuff are the same. Also, German is spojen in Europe, so I think most of the guys and the girls choose German growing up.

LAKI: When did you start learning English? Is that something from kindergarten on?
OF: I think you start when you’re like eight, nine, 10 years old, maybe, until you’re like 18. So basically everyone my age, they learn how to speak English pretty well. I think the older generation, my parents and so on, they like to speak English, but they’re not as good as people growing up right now, so I think it’s good learning a second language.

LAKI: I think I asked you way back in development camp, but how much Russian did you pick up last year?
OF: Ahh, just a couple words. I can get around ordering stuff in a restaurant, and hockey-wise, it’s pretty much the same. But in the end, I can understand pretty much what they’re talking about, but not really exactly what they talked about. Like, I know what topic they’re talking about. I’ve forgotten most of it because you lose it pretty fast when you don’t speak it during the summers. But if I go back and am there for a couple of weeks, I’d probably pick it up pretty fast.

LAKI: When you were practicing with Sochi, was there any sort of process when you were at practices learning drills and knowing what the coaches were saying?
OF: Every coach spoke English, so they translated everything about it. But I would say at two months during the regular season, I would say that’s the breaking point. Like, in the beginning it was pretty hard. You heard them say the same words over and over again. You didn’t really know which ones they were, but after two months during the regular season, you pretty much knew what it was.

LAKI: Was every single meal on a game day chicken and pasta?
OF: Yeah, I think I had rice, pasta and meat sauce during the whole season, and you don’t want to change it or try something weird, Russian stuff to eat, so it was pretty much the same during the road trips. When I was at home, I had mu fiancée cooking, so it was pretty nice to have someone cook for you and it was good to have them have kitchen where you can cook your own food. That was the best part.

LAKI: Was there any bizarre pre-game meal that you had in Russia that was different?
OF: I remember after a game, that night when we came back to the hotel and we were eating, it was like the chicken wasn’t done. It was half-cooked and it was bad, but they had room service, so I had a burger. One time, the rice was hard, the chicken, you could see it was half-cooked. It was like, ‘I’m not eating this one.’ Obviously some days and sometimes you had a bad stomach. I had a stomach flu for 10 days or something where I couldn’t eat or do anything. It happens once in a while, but it wasn’t that bad as it sounds. But it was pretty much the same food over and over again.