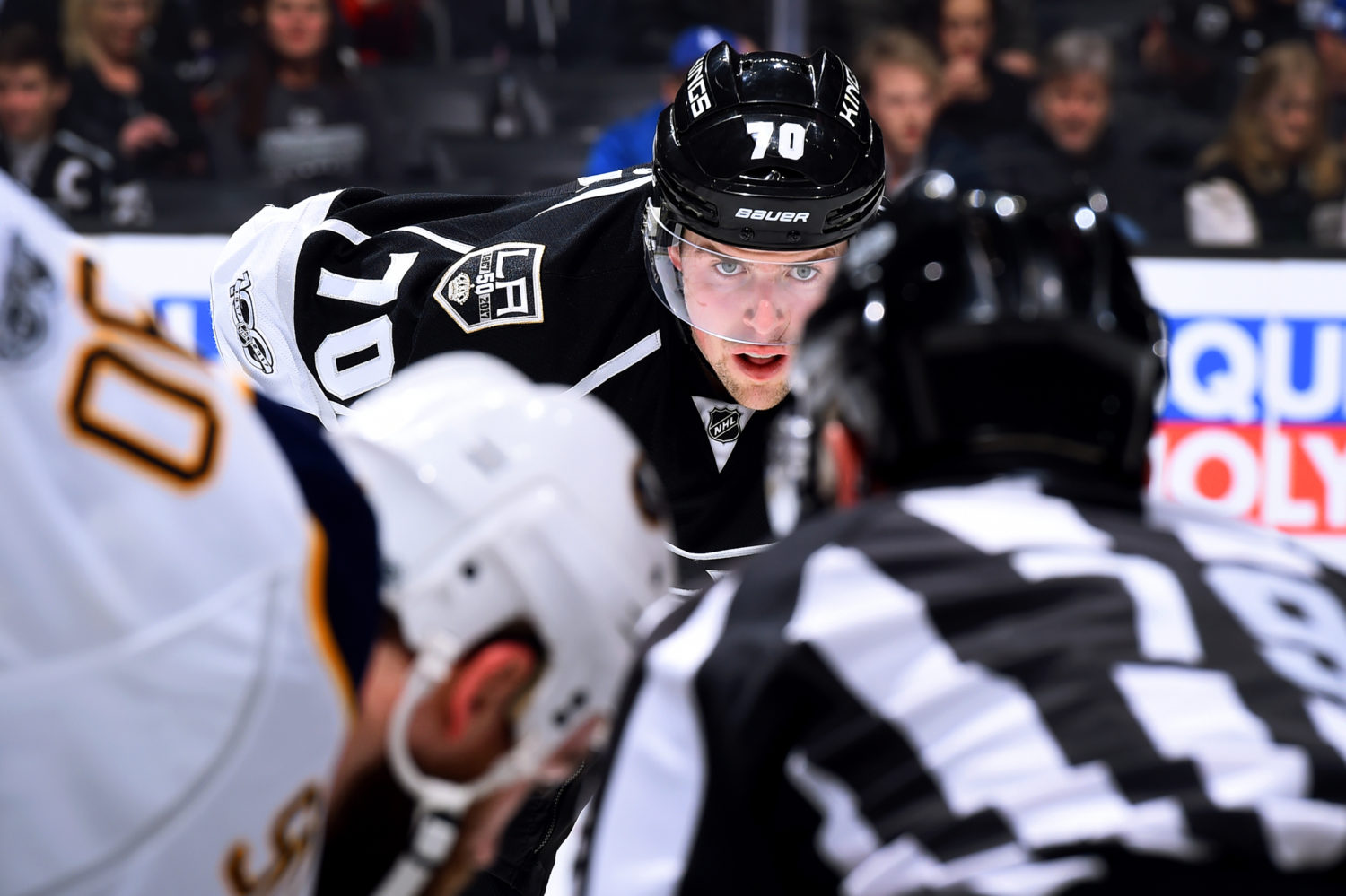 A good afternoon to you from El Segundo, Insiders. The Kings took the Toyota Sports Center ice shortly before 10:00 a.m. and aligned as such:

-Jonathan Quick was the first goalie off the ice, and because tonight’s game opens a back-to-back, the #LAKingsGoalieTweetOff applies. Michael Cammalleri and Kurtis MacDermid remained on the ice to get in some extra work with Darcy Kuemper, so they’re not likely to play tonight. John Stevens was asked what Cammalleri will have to do to earn more minutes, and he responded, “I think Cammy is a guy that usually ends up around the puck a lot, and I think he ends up winning a lot of puck battles, stick battles and creating a lot of scoring chances with his hockey intelligence and his tenacity. That’s kind of what we’re looking for.”

-The Kings-Sabres match-up has been dominated by home teams, and Los Angeles has done an excellent job keeping Buffalo off the scoreboard at Staples Center for the heavy majority of this decade. Here’s your reminder that the Sabres have not scored in downtown L.A. since Craig Rivet’s third period goal in a 4-3 Kings shootout victory on January 21, 2010. Since then, Los Angeles has shut out Buffalo by 2-0 scores in each of their last four Staples Center meetings, compiling an impressive 263:53 shutout streak.

-The word on the street: 20-year-old forward prospect Austin Wagner, who underwent shoulder surgery in early June, has resumed some light skating. There was a red no-contact jersey hanging in his stall Saturday morning. He’s still a ways a way from getting into any sort of practice stage, let alone an assignment to the WHL’s Pats or the AHL’s Reign. Stick tap to the keen eyes of LA Daily News Kings beat writer Clay Fowler, who saw him on the ice early Friday.

-I’ll have a story going up later today on Martinez, who is expected to make his 2017-18 debut after being withheld from the first three games and going on injured reserve with a lower-body injury sustained at the end of the final practice before the start of the regular season. (He’s still on injured reserve; an activation should be expected to take place closer to game time.) There will be some interesting quotes from John Stevens, who praised the work Martinez put in to become adept at both the left and right sides of the blue line. “[He’s improved at] taking pucks off the wall, especially on the blue line, defending on that side of the rink, and he’s become probably more comfortable on the right than the left,” Stevens said. “I think it’s always been part of his game, but certainly since the Cup in ’14 and what he did on that run and the big goals he scored – but I think his feet and his puck skills have always been a big part of his game.”

-Eden, N.Y. native Alex Iafallo has been an interesting story over the first two weeks of the season, one that’ll continue through tonight’s game as he faces off against his home town Sabres. Yes, he was a Sabres fan growing up, and fortunately any memories of 1999 are hazy, since he was only five and a half years old when Brett Hull’s skate was in the crease.

“I don’t remember much, just a lot of commotion around,” he said.

Enough of that controversy. It’s always a special day the first time a player faces off against their hometown team.

“I mean, [they’re] right in the back yard, you know? Just go after school to the game, hop over,” Iafallo said. “So definitely a fan, but you know it’s going to be fun playing against them today.”

He was a fan of Dominik Hasek, Chris Drury and Derek Roy when he was younger. But towards the end of the summer, as he prepared to return to Los Angeles for training camp, he skated at the Harborcenter facility adjacent to KeyBank Center alongside players like Jason Pominville and Zach Bogosian.

“Some of their prospects were out there too, so I got to know them a little bit,” he said. “I mean we’re just practicing, working on our game to get ready for camp, so just chitchat here and there.”

It’s not a bad run for a player who played a lot of Triple-A and travel hockey until he was 18 and joined the Fargo Force of the USHL. By the time he stepped onto the Minnesota-Duluth campus a few months shy of his 20th birthday, he hadn’t attracted a great deal of attention from OHL teams, though he did attend several NHL development camps throughout his Bulldog career. In his senior year, when he potted 21 goals as part of a 51-point, 42-game effort, necks had strained by virtue of how hard heads had turned.

But Iafallo isn’t really thinking of his career path – or his first career point in Wednesday’s overtime loss to Calgary – when he takes the ice tonight.

“I’m excited to get out there,” he said. “It’s been an honor to be here with such great players and a good organization. So coming into the fourth game against Buffalo, it’s going to be fun. We’re looking to win here.”

“I watched them as a kid. But you know, now it’s just the same old game so I’m just going to try to work hard and play the game and use the resources and win a hockey game.”

There’s more on Iafallo via Mike Harrington of the Buffalo News.

-Speaking of the Sabres:

Via Harrington, Okposo has been ill on this trip but played through it in Thursday’s loss at San Jose. It appears there’s a decent chance he may play in Matt Moulson’s spot on Ryan O’Reilly’s line. Robin Lehner is expected to start in net; he’s 1-3-0 with a 2.58 goals-against average and a .921 save percentage in his career versus L.A.