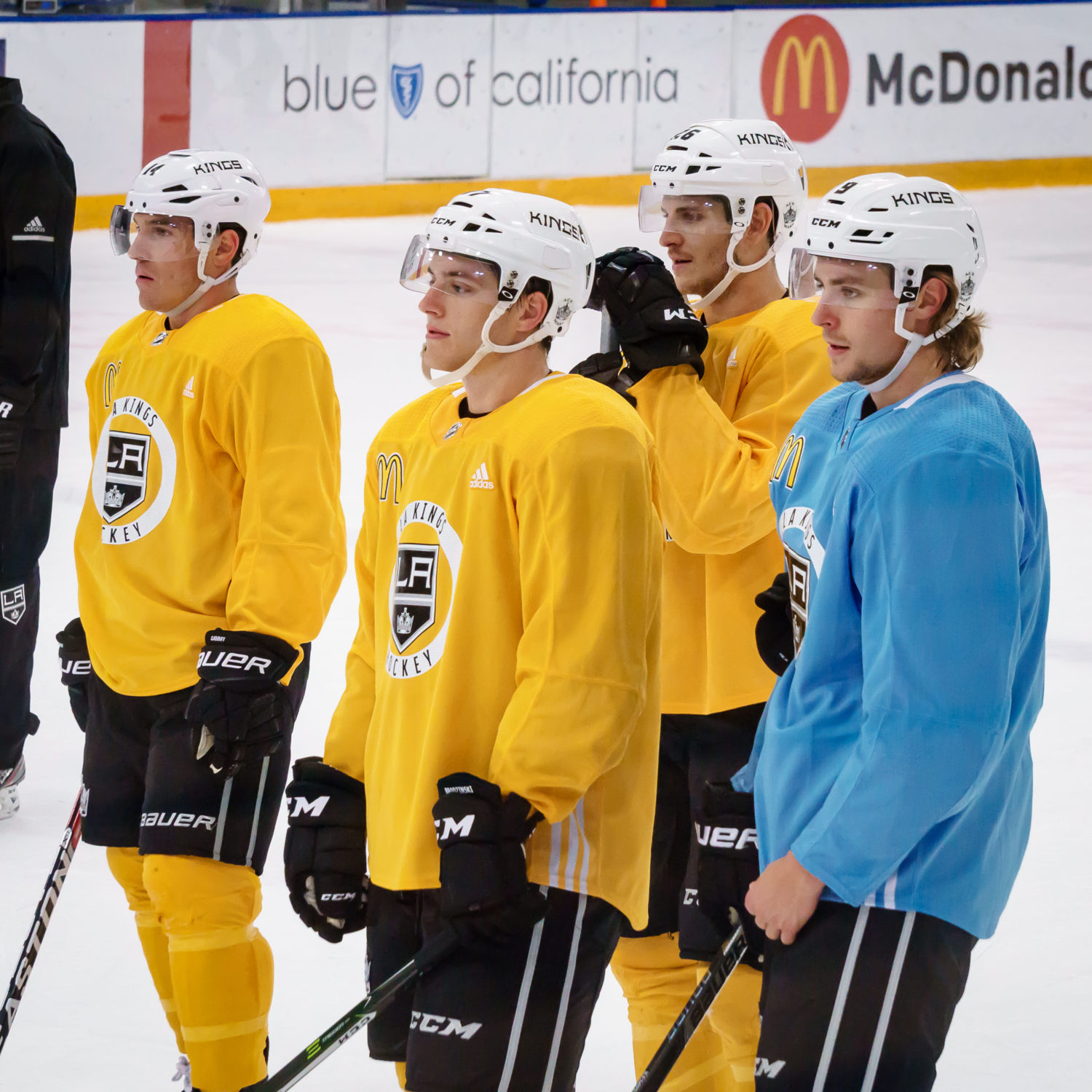 On his tolerance for after-the-whistle altercations:
The games are going to probably get a little more ramped up than that one was, and I think there’s a little bit of that. I think there’s always got to be a sense of discipline. It’s in the best interest of the hockey team. I don’t have a problem with guys that stand up for each other when liberties are taken. I’d much rather see our team play hard between the whistles and if anything carries over after the whistles it should have a real purpose for the good of the hockey team. In Andy’s case, I didn’t see the hit when it happened, but I think he saw a teammate that got hurt and he thought it was a little bit of a cheap hit. I don’t think it was, I think it was a hockey play. But that’s how he reacted, and I’ve got no problem with that. We need a real sense of discipline for our team, but I think these guys care about each other, and he went to bat for a teammate that goes to bat for us every night, and those types of situations we’re fine with. Brownie took a physical penalty, we’re fine with that. Even Adrian going to the net, I think he’s trying to go to the net and find space, I think we can live with those penalties as opposed to the reaching, lazy stick infractions. I didn’t really see anything in that game that crossed the line from either team.

On Alex Iafallo’s progression:
He’s been terrific. I think you’re always looking for a pleasant surprise in training camp, and we were kind of cautiously optimistic about Alex, seeing him in development camp and then rookie camp, and you want to wait to see him with the pros and see how he does and see if he can be the same player, and he’s been able to do that. He’s got a real well-rounded game, he’s tenacious. He’s been able to go to the next level of play and not just playing in regular season games, but playing with high-end players and be the same player, and that’s what you hope for every young player – that he doesn’t change his game because he’s playing with Kopitar and maybe not do the things that are instinctive to him, whether he’s playing with Kopitar or he’s playing with me, and Alex has had an ability to do it. It’s not often you see that the first time through it, but he’s done a really good job with it. [Reporter: Do you have to keep your eye on him just maybe a shift or two tomorrow – the old ‘first time against the hometown team?’ He might really be sky high?]. Jeez, I don’t know. He’s up in Minnesota-Duluth, he’s next door to Santa Claus there for a long time. He’s been gone long enough that that’s not a big concern. [Reporter: He was pretty stoked, though.] Yeah, and that’s good for him. The one thing we did talk about, just the schedule and not so much who we’re playing, but the schedule hasn’t changed too much in terms of what he’s used to. But you’re going to get to a point now where you’re playing every other day, which you might not be used to, but I know he’s an upstate New York kid, so playing against his home team is probably a pretty exciting moment for him.

On the power play:
We think the power play’s done a lot of good things. I think I said early on that you’ve got two goals on the power play. One, obviously, is to score, and two is to get momentum. I think we’ve got a lot of momentum, but we just don’t want the guys to get too frustrated with the process. We don’t want to be a team that relies on the power play. It’s part of the game, that should be able to help you win games, but it shouldn’t be something that you rely on to win games, and I think that’s always been our mindset here and it’s certainly my mindset. I would like to see us start to get some contribution offensively from the power play, but I think we’re getting good looks If anything, simplify a little bit. Don’t go away from shooting the hockey puck a little better. Focus on having a stronger net presence. Those types of things are kind of what we’re focusing on, but we’ve had good looks on the power play. We’ve charted quality scoring chances on the power play and where they’re coming. Just little tweaks, maybe a little more bearing down can make a difference. [Reporter: You say you don’t want to rely upon the power play to win you games. The penalty kill, I felt the other night, there was a swing after you killed off those two consecutive penalties.] It gave us a lot of momentum. There was an article that came out last year that statistics prove that your penalty kill is usually more important than your power play. I’ve always felt that, but they kind of proved it. So at the end of the day, even when you look at the playoffs, it’s your five-on-five game that I think is going to be the most important. Special teams, obviously, is critical, especially with the fact that there are more power plays right now than there normally are. I think that’ll work itself out. But it can be a factor. We’re going to continue to work on it. We’re not going to only focus on the power play, but it’s certainly part of our game that we can utilize to try and win hockey games.

On what influences personnel decisions in overtime:
Well, we’ve had a formula here that’s worked for a long time. We’ve been the best team in the league for two years. Kopi, Jeff and Drew have done a really good job getting us started on the wrong [right?] foot, so that’s kind of a no-brainer for us regardless of who’s on the ice. We had a two-on-one we had created there, just didn’t execute, but for us, we think we have lots of people up front. We’ve always been big believers in using two forwards because we think our forwards are really responsible. I think checking three-on-three is as important as anything else. I think if you do a good job checking, then you usually create an opportunity the other way. Fortunately the other night their last three goals all came from we had the puck, we had the puck and turned it over, and that was the case in overtime. But we have a lot of people that were put in those situations that we think can provide some offense and still create some offense from being good checkers, and it’s usually in the form of two forwards and a defenseman. Unfortunately it work not having Marty there because I think he’s one of the better three-on-three guys in the league, but it’s an opportunity for the other guys to get some of those minutes.

On what makes Dustin Brown effective in front of the net:
Big man with good hands. Always like that combination. He’s a big, power forward that’s got a real north-south mentality to his game, but I think he’s got good hands in those areas and I think he’s got the courage, he’s willing to go there. I think you see a guy like Brownie, when he’s confident, it seems like handles pucks clean in those areas, and if maybe he’s lacking confidence, he doesn’t. Right now he’s confident. I thought that line was really good and he might’ve been our best forward the other night in terms of on-the-puck, puck pursuit, physicality and getting rewarded with chances the other way. It was a typical power forward game out of Dustin Brown.

On whether there has been any rise or fall in the number of deflections the team charts:
I don’t have those numbers, per se, but something we’ve always focused on is having a net presence as a really building block of what we’re trying to do offensively, whether it’s getting there on the rush or being there in the zone, and I think from that, it’s created a lot more looks from the middle of the ice for us. If you look at the two goals we scored in the third period the other night, there was a guy right in front of the goal with a deflection that went right into the net. That guy doesn’t always get credit for what’s created around him, but I think the fact that a guy was there, and that guy was Brownie – Tanner’s done a good job of getting there – we’ve got lots of people that are starting to go there, and I think that can only help us win. I don’t have the specific numbers in terms of deflections, but certainly, number one, having somebody there, and having somebody there [inaudible] is really a focus for us right now. [Reporter: Is part of that, too, having a defenseman being able to get the puck in there? Because these days, teams like to shut down lanes and not even let you get a shot in there.] Yeah, but what I think you’re seeing now is D are very, very active. As active as I’ve ever seen defensemen. But it’s not always coming from the top teams. They’ve really learned how to get in the lanes from the top. You’re seeing an awful lot of plays from underneath. There’s what I would call a side-seam attack, and I think you’re seeing a lot of that. The shot-pass seems to be more prevalent now than it’s ever been. I think just the low-to-high play, get it to the net is something that teams utilize a lot. I think you’re seeing teams spread their defensemen wider up top now to try and change the angle more drastically to create a better angle to the net. But the fact that teams are going to the net to score goals, I don’t think that’s ever going to change.

On what makes Anze Kopitar and Dustin Brown a good pair:
I’m a believer if you look at the top offensive lines in the league, you usually have a really good puck possession guy, and then you usually have somebody that ends up at the net, and Kopi’s one of the better puck possession guys in the league, and Brownie likes to get to the net and drive people back, so I think because of that, the third player on that line has changed over the years. I think Alex has been a real good fit there just because he has a real tenacious game. He gets open in scoring positions. But when you have a puck possession guy and somebody that goes to the net, that’s almost always a good combination. 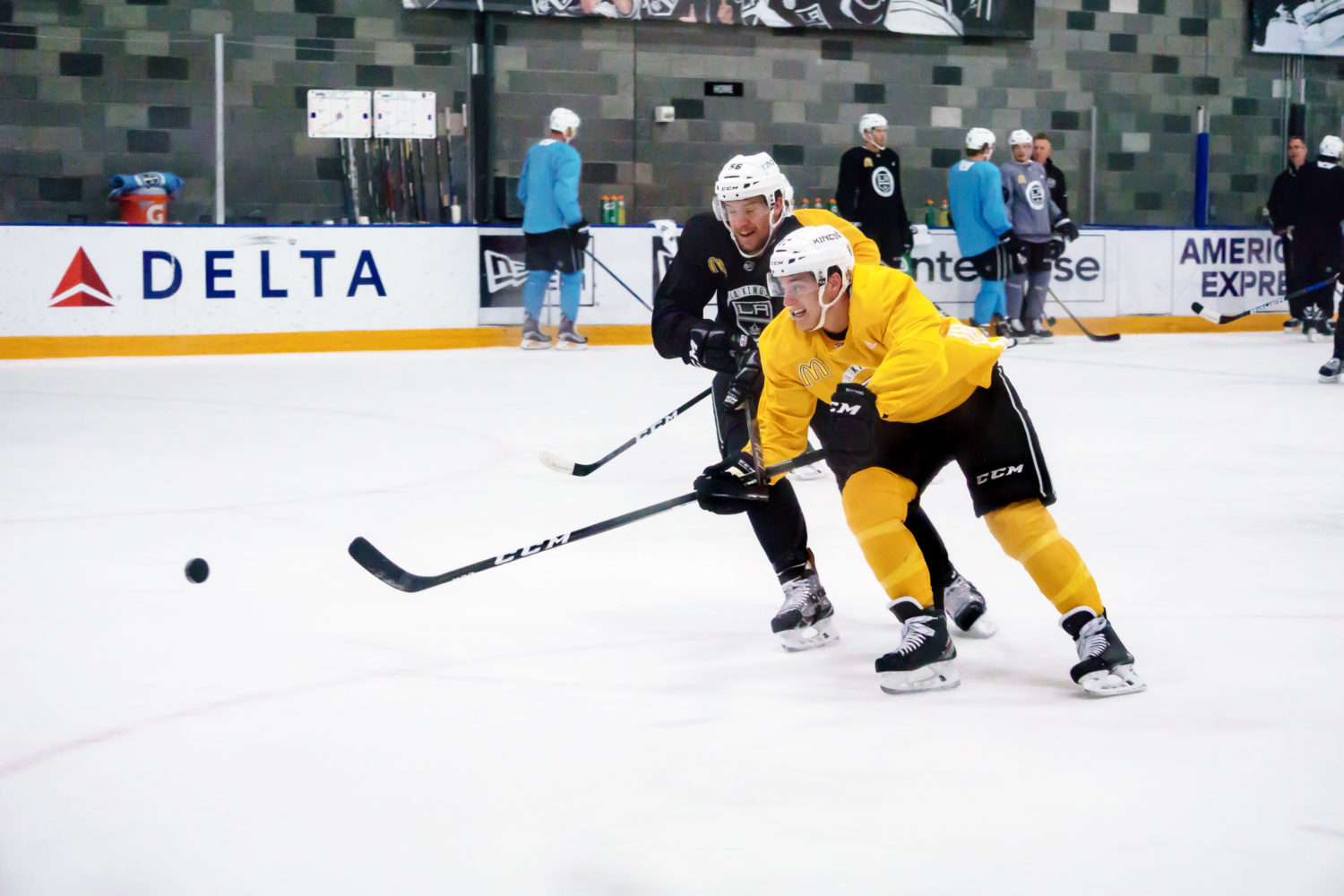 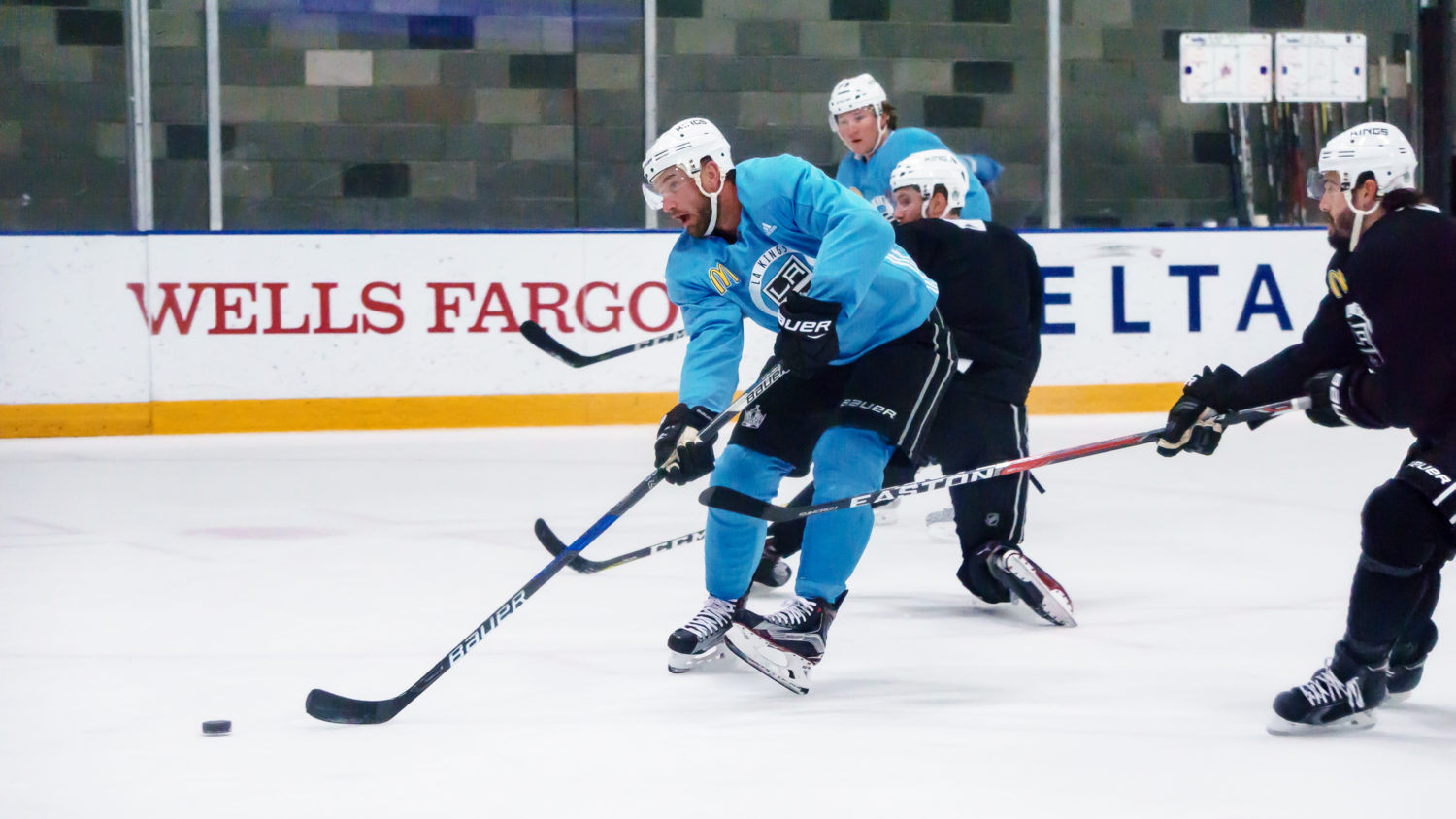 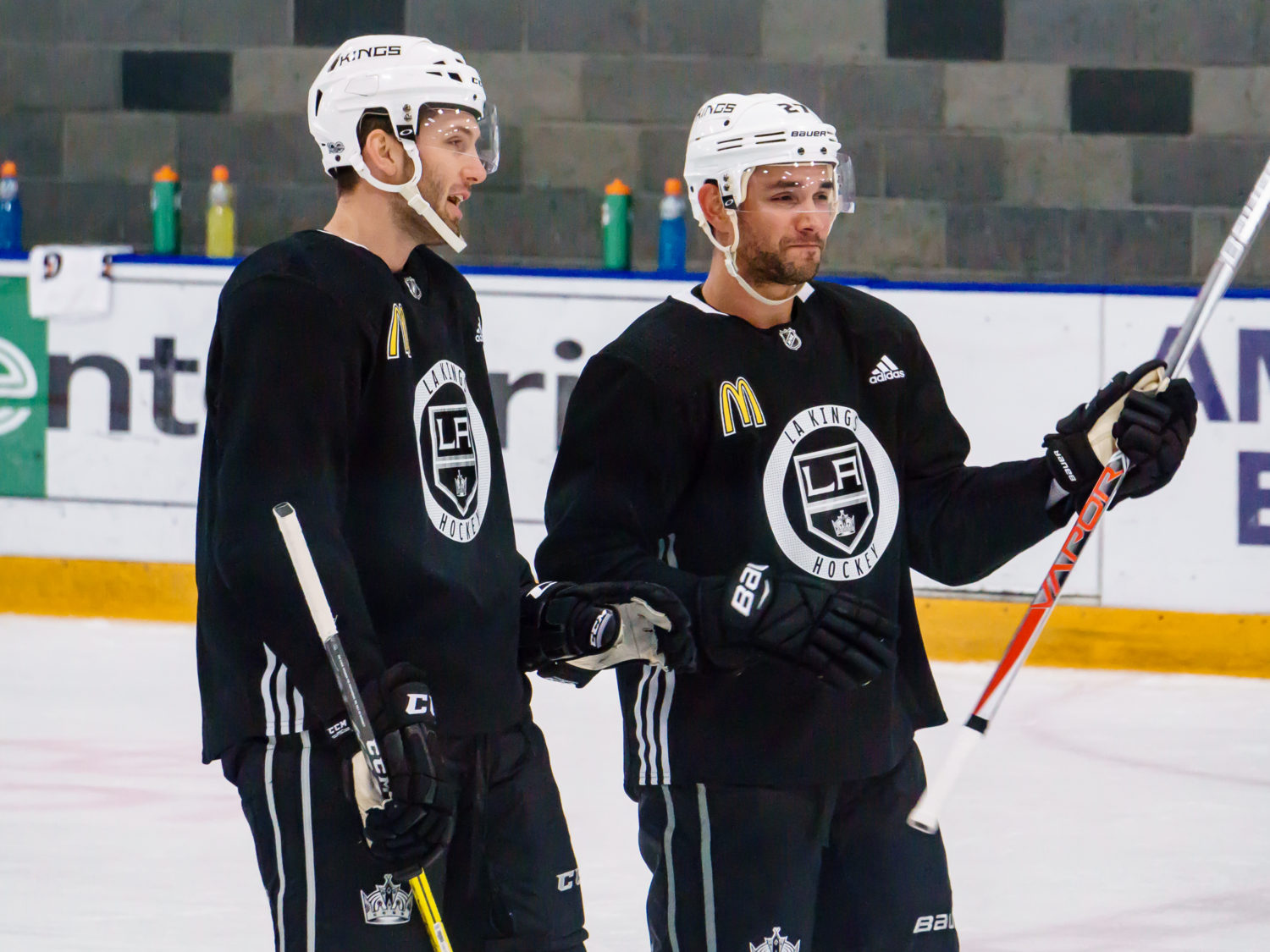 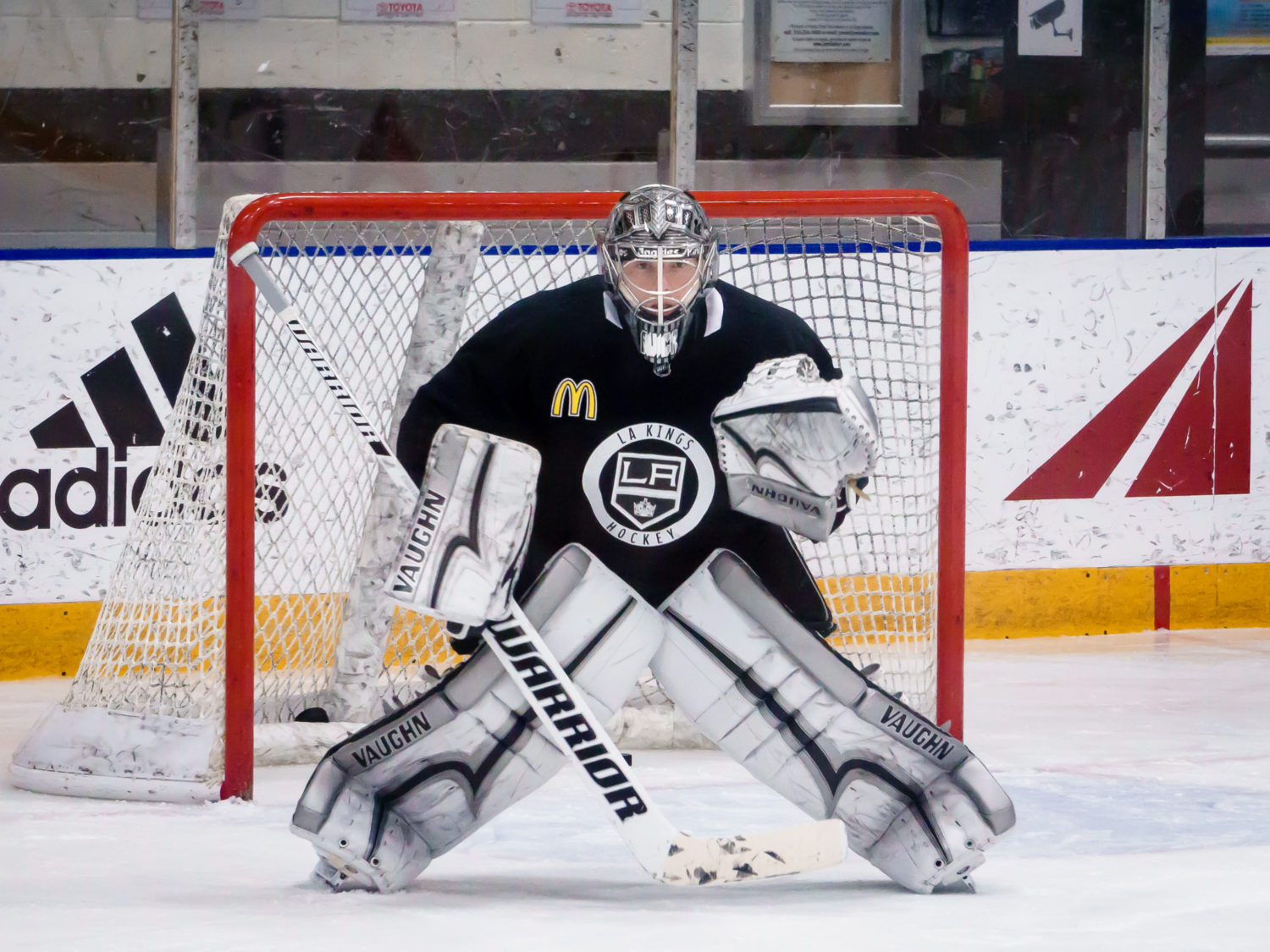 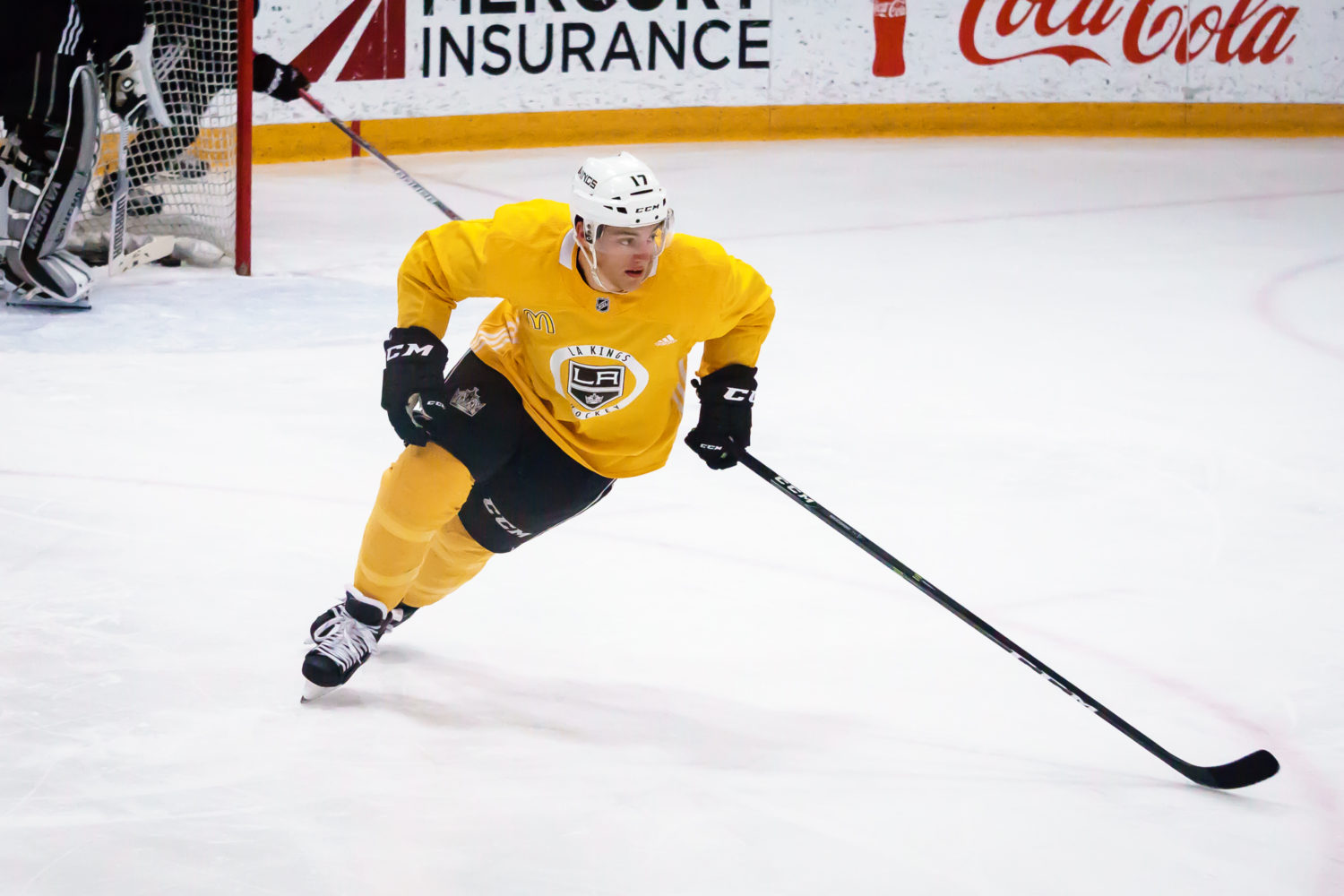