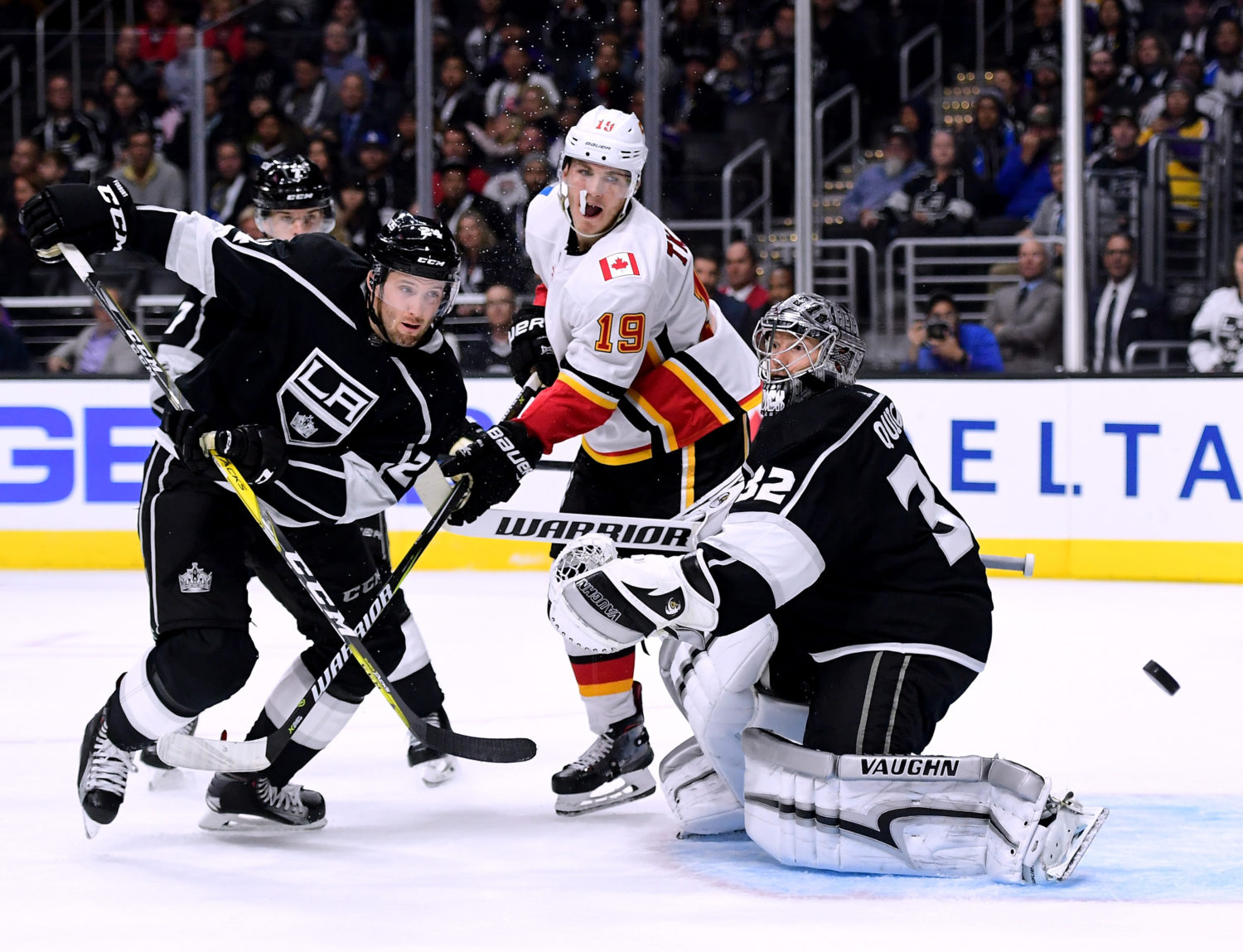 Coach Gulutzan, on the team’s performance:
We have to get better. We’re giving up way too much. Once again I though it was our goalie who bailed us out of here. I didn’t think we were bad for the first 30 minutes. After that first power play we got outworked, they really took the game over in a big way, I felt. We haven’t given up this much since last year I felt and we need to clean it up. Obviously points are precious in this league and you take them, but we have a lot of work to do to get our game where it needs to be.

Gulutzan, on what specifically, needs improvement:
For me right now, our battle level, our execution in certain areas, our breakouts need to get better. We’re spending too much time in our own zone. We’re giving up too much off the rush with our puck management. So we do have to tidy that up. You know last year in the last 50 games we might’ve gotten out-chanced 15 times, 35 times our opponent. You know we’re getting out chanced on a nightly basis and that cause for concern.

Gulutzan, on Jaromir Jagr:
You know I think he got 13 minutes or so. It’s the next step in his way back here without a training camp because you can’t simulate what he got here tonight in those 13 minutes. We were aiming actually for 10-12, he got a little more than that. But yeah, we’re going to build. His game is going to come as he gets it. But this is a big building block for some fire that’s going to come in awhile.

Gulutzan, on Matthew Tkachuk:
I thought he was engaged in the game. I thought he was really good. I don’t know how we got a penalty out of that scrum but I thought Matthew was engaged. Scored a big goal for us. And you know last two games he’s got back to his form.

Matthew Tkachuk, on tonight’s game:
Big win and showed a lot of perseverance, you know the start of the third obviously isn’t how we drew it up at the end of the second but I thought the guys, we were sitting back a little bit at the end of the second. But we came into the third and we were down, we were putting pucks in the net and getting bodies there, and some chances. So I like the perseverance from the group.

Tkachuk, on his two goals as a birthday present for his mom:
Yeah I tried to get her that third one with the two-on-one at the end, but I told Monny he’s good in the overtime so save it for him to finish the job.

Tkachuk, on the momentum of the game:
Like I said, I liked our perseverance when were were down. We never gave up and Smitty made some huge saves. I remember that backhand when Brown came across, he was going for his third, and that’s when I went out for the faceoff, I told Smitty, you just changed the momentum of the game. Then we went out there and got one and could’ve won in regulation, but it was a good game. It was a good third period.

Tkachuk, on the start to the season:
First game, we were definitely sitting back a little bit. We weren’t as good as we could be. And Winnipeg we started off a little slow. A real good finish there. And then this little two game road trip, we feel pretty good about ourselves.

Tkachuk, on any rivalry between him and Doughty:
I never really look at it as a battle between players. I mean, they’ve got a lot of guys on their team that are passionate and all that. It makes for divisional rivalry I guess. I mean, they’re right up there with the Edmonton’s and all them. Those are passionate games to play in and fun games, really good games. I don’t know, you guys tell me, I thought that was a pretty good game to watch.

Tkachuk, on Jagr:
He was great, you can just see when he has the puck, not many peo;le are going to take it off him. Just great little plays, using his body, hes got a big lower body, so guys definitely don’t over power him.

Sean Monahan, on the start to the season:
I think we stuck with it. I mean road trips are tough. And this was our first one of the year and like I said earlier, we got some new guys on this team and everyone’s buying in. So I think everyone accepts their role and is doing their job well right now.

Monahan, on Tkachuk’s performance:
He was great. He’s building every game. I mean he’s a hell of a player and those goals he put in for us were huge. So I think he was on the score sheet and making a difference, I guess in there too, and stirring it up. So he did a great job for us tonight.

Monahan, on Jagr:
Jags is great. I mean he’s got so much patience there. I mean him and Steeger had some shifts where it felt like they had the puck for two minutes. But yeah it was great. It was his first game and I’m looking forward to having some more.

Monahan, on the way the team is playing:
I mean we’re playing hard. And when you play together and you’re sticking up for each other it goes a lot way. But right now everyone is playing their role and buying in. And I think that what makes this team good and that’s what we’re doing.

Monahan, on goalie Mike Smith:
He’s a great goalie. I mean he keeps us in every night and gives us a chance even if things aren’t going our way. So he’s kept us in there again tonight and kudos again for a great game.

Monahan, on the comeback:
I think it’s just the kind of team we have. We have a tight group here in this locker room and when things don’t go our way, we just find a way to bounce back.

Mike Smith, on special teams play:
Yeah I mean it’s a huge part of any teams success. I think out penalty kill has been pretty solid. You know, I think G had seven or eight blocked shots there tonight so he’s kind of like a goalie back there for me. But all our defensemen were great. All the penalty killers were awesome. I thought when we got the two goals it felt like we wanted to play an easy game and like I said, you can’t do that against a good team in this league in their building. We’ll learn from that. But at the end of the day we came out with a win and like I said that’s the most important thing.

Jaromir Jagr, on positives from the game:
There were some shifts where we were able to play down low the way we should play. After my legs come back, it’s going to be a little bit different.

Jagr, on having to battle back in the third:
It’s understandable, they’re a very good team. Big guys, that’s tough to play against, especially at home. So, even we had the lead, we knew they’re going to come back a big push and they did it. You kind of survive. Tkachuk scored a big goal ad we scored in overtime.

Jagr, on his observations of the team so far:
Their expectation is very high, it should be. They’re a lot of great offensive players. Defense is fantastic. They can move the puck. You don’t have to worry about it as a forward and as a goaltender its great. So its up to us how far we can go.

Jagr, on starting the season strong:
The start is always important. I always said early in the season it’s a lot easier to get points than later in the season and we have to take advantage of it.