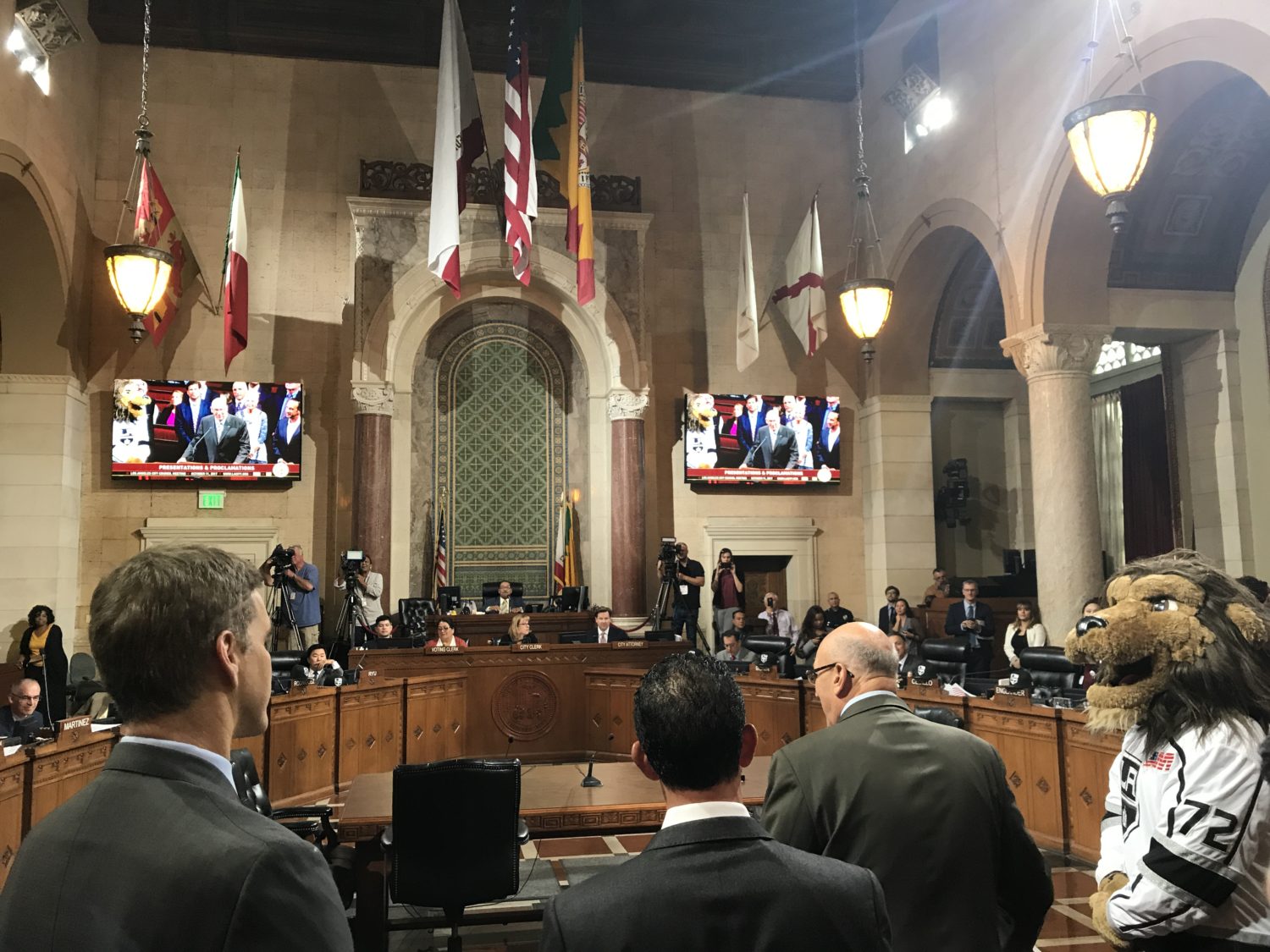 After Bob Miller stood in front of the Los Angeles City Council and listened to testimonials shared by AEG President and CEO Dan Beckerman, LA Kings President Luc Robitaille, Radio Play-by-Play Announcer Nick Nickson, Radio Analyst Daryl Evans and TV Analyst Jim Fox, and was congratulated by the presenting council member, Mitch Englander, he spoke about what it meant to be a Kings fan in a city crowded with accomplished and popular sports teams.

“I think one word: loyalty,” he said. “They have been loyal through some of those lean years, and there were a lot of lean years where we wondered, ‘will we ever win anything? Will we ever win the Stanley Cup?’ And those fans were there night after night, still cheering this team long, and then I was so happy to see them rewarded with the first Stanley Cup, and then the second Stanley Cup, to see the joy that it brought to all of them.”

And that’s a prime representation of Miller’s 44 years of selfless service to the club. He made viewers and listeners feel as if they were there, right alongside him, watching the game with a friend who didn’t look down or condescend, but rather to explain – with giddy excitement, and an applicable story, of course – of precisely what was unfolding in front of him.

The fans that were brought along for the ride will now be able to salute Miller, even if they aren’t actually in close proximity to the Foster Hewitt Memorial Award recipient who now serves as a club ambassador. A statue, designed by sculptors/artists Julie Rotblatt Amrany and Omri Amrany, will join those of Wayne Gretzky, Magic Johnson, Jerry West, Chick Hearn, Oscar De La Hoya, Luc Robitaille, Kareem Abdul-Jabbar and Shaquille O’Neal at Staples Center’s Star Plaza, will be unveiled on Saturday, January 13, reflecting a continued salutation of Los Angeles-affiliated stars that, in effigy form, add pageantry to the experience of seeing a game in the world’s entertainment capital.

The statue unveil will be part of Bob Miller Celebration Day and will take place in advance of that night’s Kings-Ducks game, which also features a special “BOBblehead” giveaway presented by FOX Sports West.

“Bob Miller will forever be the Voice of the LA Kings and we look forward to honoring Bob and his family as part of this very special evening in January,” Robitaille said in a statement. “It is a tremendous honor and one Bob certainly deserves.”

After the ceremony at City Hall, in which he received an official plaque commemorating his decades of service in helping shape Los Angeles sports culture, I asked him when he truly began to feel like an Angeleno. Naturally, he began feeling more and more at home when the warmth he and his wife Judy exuded was reciprocated, and their social circle, centered around Kings games, began taking form.

“I think it was a couple years until we had friends at the games that we knew, the way we did back in Madison, Wisconsin at college games, and Judy would sit around friends that she knew, and we’d get together after the games. Then it felt like home,” he said. “At the beginning, she was sitting alone, and we would drive home, nobody with us, no party coming up, and I said, ‘I’m not sure we did the right thing here.’ But we got more familiar with it as the years went on and more familiar with people who were always so gracious to us, and then it really did feel like home, and we just took it from there.”

“We really can’t believer ourselves that it’s been 44 years. We lived in Los Angeles longer than any place in our lives, and it has been a pleasure.”