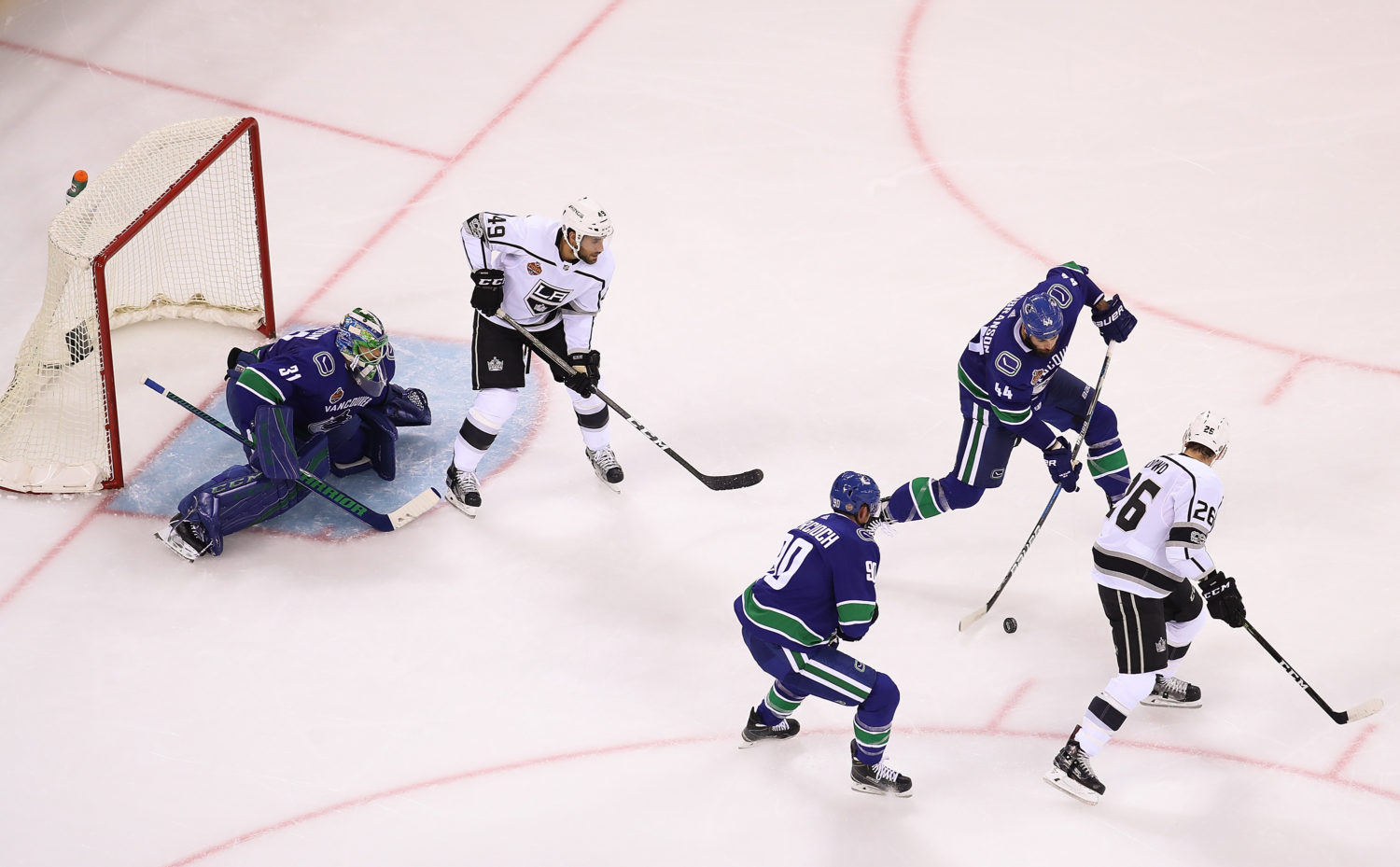 John Stevens, on what he’s seen from Kurtis MacDermid:
Well, there’s lots of things. Kurtis, we’ve encouraged him to just keep getting better. He’s improved each and every year we’ve had him. I mean, fitness-wise, I’m not sure he can improve any more he’s gone off the charts in terms of what he can control to get better. I know Sean O’Donnell spent some time with him this summer just focusing on being a really good defender, a good first pass guy. I think he’s known to be a real hard-nosed, physical presence on the ice, but we want him to combine that with being a really, really good defender, and that’s on the rush, down low in his own zone, so those are some of the things that we’ve looked for. Again, I think the fact that he’s a big man, he’s in great shape and he can really push his own pace all the time allows him to be an effective player.

Stevens, on the reasoning behind Nic Dowd’s switch from center to right wing:
Well, we had actually talked about doing it on the trip. Just didn’t have the opportunity, based on who was in and who was out. As you’re seeing in the league now, I think you have to be able to have the options and play more than one position, and I think it’s always good to have more than one centerman on the ice, especially with what’s going on in faceoffs. But the strength of Nic’s game is his ability to make plays off the wall and then certainly in the half-court game. We’d never looked at it, we just thought it’d be something we’d like to see.

Stevens, on both the on-ice events and pageantry and preparation for the NHL China Games:
Well, just from a pure, preparation standpoint, we thought we got some good work in over there. We thought we got better as a team in certain areas that we’re trying to improve on, and when you play games, it gives you areas that you’ve got to identify and also try and shore up parts of your game. But from a hockey perspective, we thought it was good. We hoped to get a couple good practices in, and we hoped to get better in areas in games, and we think we did. In terms of the off-ice in the game over there, I think time will tell. I think the game needed to be exposed over there to really get people to love it, and if they could get more kids playing the game over there, I think the more people that get exposed to it, the more people are going to like it. The more kids that play the game, the more kids are going to want to play the game. I think it was a really good first step, but I think time will tell. [Reporter: Did it feel like a historic thing you were doing when you were over there, the reception that you got?] To be honest with you, hockey seems to be hockey at the rink. I mean, we really were just focused at the rink. Game days were game days. But for us, the whole day at the wall and being exposed to that atmosphere, that certainly felt different. Just thinking in the light that the first team to go over there and play and be exposed to that market certainly made it feel historic.

Stevens, on whether Marian Gaborik has been fully cleared:
No, I mean, he’s just moving along, progressing along. He’s had some really good progress here, but he had some minor setbacks along the way, too. He’s obviously been integrated into some full practice situations, so we’re just going to monitor him, see how he responds each day. Most of it’s been positive, but no, he’s not been fully cleared.