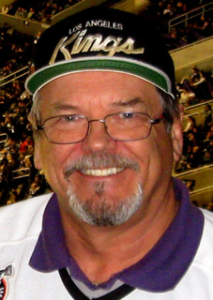 Bruce Cameron, a longtime participant on LA Kings Insider and the Daily News’ Inside SoCal Kings page, passed away the morning of September 12, 2017 following a hard-fought battle with an aggressive form of cancer.

Pictured above between King Alex, Puck73, Monkeyboy and Michael J, Cameron was a familiar presence at Suite Nights and also attended Kings nights at Dodger Stadium, where in 2012 he proudly celebrated the team’s first Stanley Cup championship.

When I was new to LAKI and trying to educate myself with the site’s traditions, humor and commenters who had been participating long before I arrived, he reached out and sent my wife and me a truly appreciated LA Kings Insider mug that was such a prime example of the community we are a part of and selflessness inherent therein. In communications, he joked that he was making an effort to avoid Daryl Evans because his hand was “still recovering from shaking his about a months ago.”

“With any luck (and a lot of hard work) there will soon come a time when you’ll be drinking something a little more bubbly from that mug,” he wrote. Unbeknownst to him at the time, that champagne would flow just over one year afterward.

Because there are many of you who knew Ice Guy from years of attending games at Staples Center and commenting in Kings forums, please feel free to leave any memories or testimonials you have of one of the original Bloggers/Insiders.

Thank you, as always, for your ongoing contributions to this community. Without you, and without the devotion of those like Bruce, there is no LAKI.