In the three-on-three skates, in which nets were set up behind the blue lines to create a smaller playing surface, goals were scored by Phil Maillet, Drake Rymsha, Jack Ahcan and Matt Luff. The Rymsha goal, which appeared to find the back of the net on a one-timer, may actually have caught the side of the net while displacing some pucks caught on the lip and netting; while it was difficult to see if it was actually a good goal, it still represented a good release that the Sarnia Sting forward had shown through camp. Luff, one of the impressive skaters during development camp, showed off nice hands in finishing off a play by stickhandling the puck around the goalie.

In the four-on-four action, Easton Brodzinski, Peter Tischke and Sean Walker found the back of the net.

The most memorable play was the result of some heated competition between Jacob Friend and El Segundo native Evan Weigner. Shortly after the two got into a minor tussle at center ice, Weinger attempted to skate a puck out of the zone on a subsequent shift and had to answer to Friend (who did not appear to be his friend). (I’ll let myself out.)

There was a strong response by Weinger on his next shift as he showed off his patented speed to generate a breakaway that was cut down by Jeremy Brodeur.

Other notes from development camp:

-This was the first time Kings development really had their hands and immediate sights on Boko Imama, acquired from the Tampa Bay Lightning in late May and signed to an entry-level contract. “As a prospect, you don’t really expect to get traded, right? I’d never played in the NHL, it just happened that you get traded,” he said. “But at the same time, you’re looking at the other side. You’re going to the L.A. Kings. Everyone knows them as a high class organization, so you can’t be more excited than this. So I was pretty happy, to be honest. I was pretty happy, and I couldn’t wait to be here.”

It has been a marathon season for Imama, who played through the QMJHL playoffs and the Memorial Cup with the Saint John Sea Dogs before recuperating for several weeks and joining the Kings for development camp. The physical demands haven’t been as challenging as the mental fortitude necessary to play through a season that began with the Sea Dogs’ training camp in mid-August.

“It’s a good thing that I’m always staying in shape,” he said. “I try my best to always stay in shape, so for the physical part, I think I was OK. Mentally, obviously it’s pretty hard. Obviously, like you say, you play 68 games in the season, then you go through the whole playoffs, then you’re in the championship tournament, and then a few weeks later, here you are in L.A. But it’s all about hockey, and I was ready, and I had fun.”

With Los Angeles, he’s looking to maintain the success he had during his 20-year-old season, when he scored 41 goals in 66 games. He’s most likely to vie for a role with the Ontario Reign, and has already identified several players in the organization who serve as prototypes he’s like to continue to model his game after.

“I’ll compare myself to a Kyle Clifford, a Jordan Nolan-type-guy,” he said. “They’re both physical players, but they really help on the hockey sides too. I think they’re reliable offensively, defensively, they play physical, they stand up for their teammates, and that’s the kind of guy I’ll be, too.” 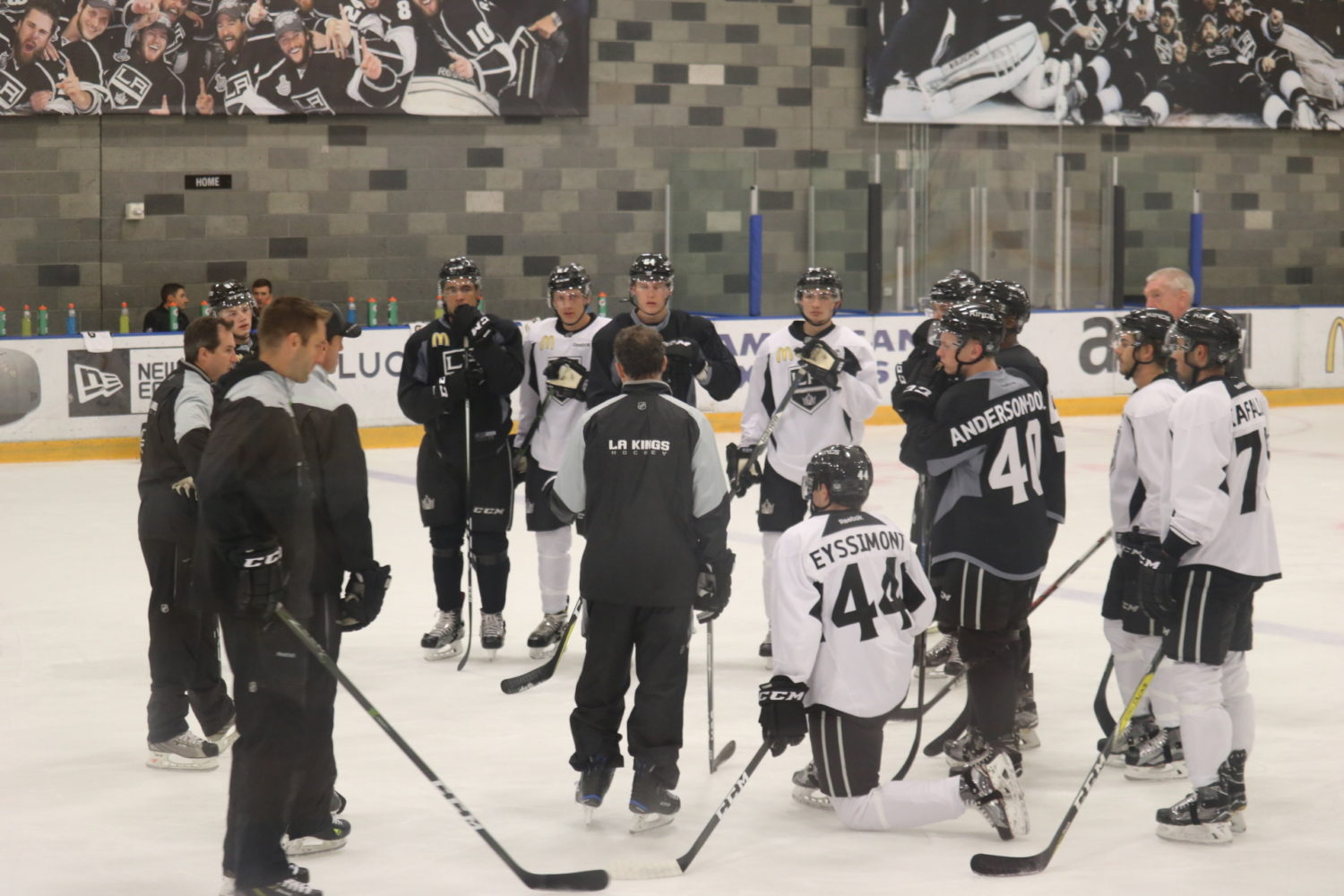 -While speaking with defenseman Cole Hults on Thursday, the first thing apparent about the Penn State commit is that he’s built like a truck. NCAA hockey’s reduced schedule allows players to spend ample time in the gym, and it’s clear that he’s already put some good work in before setting foot on campus. He used his sturdiness to protect the puck well during a three-on-three rush, leveraging off a defender similar to the way Anze Kopitar is capable of when bringing the puck into the attacking zone. The 6-foot-1, 213-pound 19-year-old is jazzed about joining a very good squad that won the 2017 Big Ten tournament (as well as being able to root for a Nittany Lions football team that will return Trace McSorley and the supremely talented Saquon Barkley).

-Matt Luff showed off an impressive skill set throughout the week that combines speed, power, skill and a hard, accurate shot. He’s still learning, and as a 20-year-old, he’s obviously got a ways to go. But it’s clear that the forward who scored 25 goals in 45 games with OHL-Hamilton has benefited from maturing and from working with the Kings’ development staff. Though his skill set is similar to a version of Tanner Pearson’s, he still loves the way Tyler Toffoli has been able to protect the puck before testing goaltenders with a crisp release. “I tape games because they’re a little later in Toronto than here, but the NHL is great just showing highlights of their goals,” he said. “Here, they sat in the same seats we’re sitting in now, and they show clips of them now, and you see the development they’ve had. We model [our release] off Toffoli. We just drag it back and shoot it in. You can learn a lot off watching video and how they do it.” 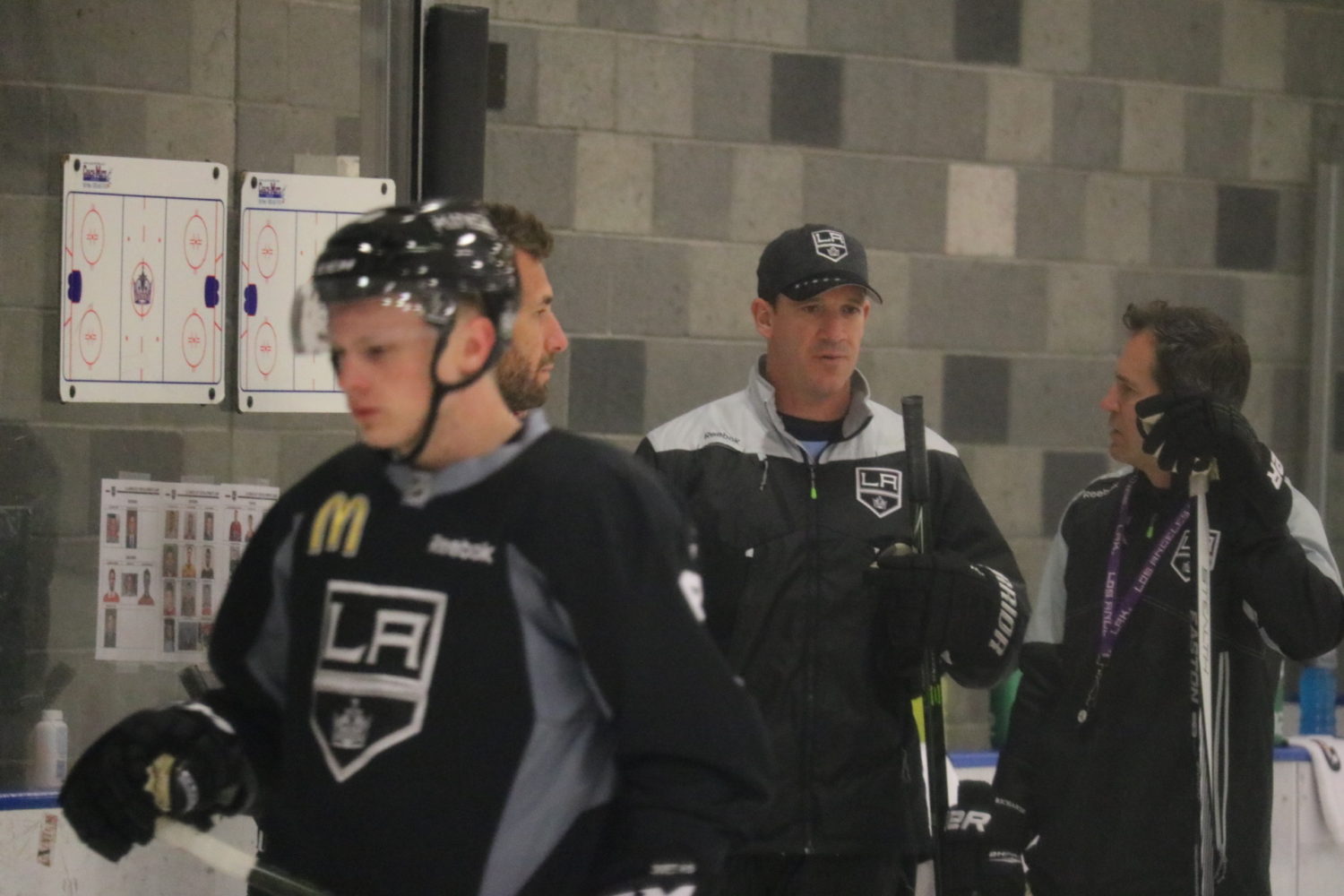 -Jeff Carter, Jake Muzzin and Alec Martinez spoke to the group earlier in the week to share their own stories of working hard, not cutting corners, and understanding that being selected in the NHL Draft or being invited to a training camp is only the first step in their efforts to get to the NHL. “Very successful people. You watch them on TV and dream of being in their spot,” Alex Iafallo said. “Just hearing them talk and meeting them, it’s been a great experience. I’m just trying to take their experience and learn from that and just try to get to their position.”

-As noted earlier in the week, top draft pick Gabriel Vilardi did not participate following a long season that resulted in a Memorial Cup championship as well as a “minor issue.” He and Jaret Anderson-Dolan spoke with me for a Kings Offseason Report that will air on FOX Sports West in July. There’s lots of good stuff coming, courtesy of producer Jack Wilson.