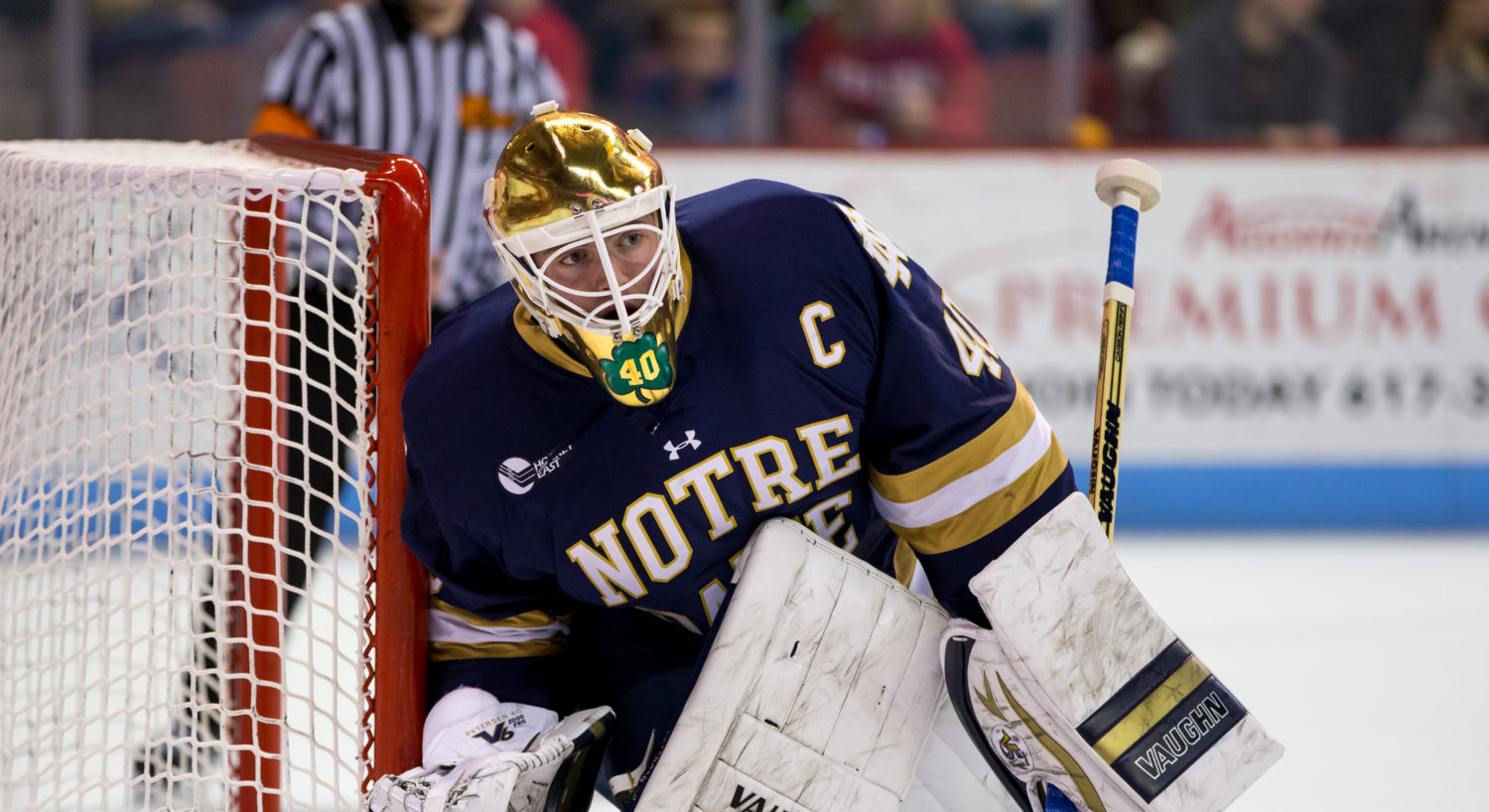 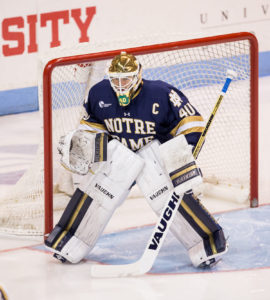 It appears as though the Kings will be landing a highly touted goaltending prospect through free agency. LA Kings Insider has learned that goaltender Cal Petersen, who announced in May that he would forego his senior season at Notre Dame to turn pro, has agreed to sign with the Los Angeles Kings. A fifth round draft pick by Buffalo in 2013, the three-year starter with the Fighting Irish informed the Sabres that he would not sign with the club and had elected to become a free agent, as reported by John Vogl of the Buffalo News.

After Petersen had informed Notre Dame that he was turning pro, Buffalo had 30 days to sign him. Nothing at this point has been finalized, nor is Petersen able to sign with Los Angeles until after the 30-day window expires. More on how the CBA affects upperclassmen in college is articulated here and here.

Petersen, a right-catching goalie who started 90 consecutive games to close his Notre Dame career, was a finalist for the 2017 Mike Richter Award and was a nominee for the award in 2016. A team co-MVP in 2016-17, he was the Irish’s MVP in 2015-16 and the club’s rookie of the year in 2014-15. He was named to the United States’ roster at the 2017 World Championships but did not get into a game. In 40 games with Notre Dame in 2016-17, he went 23-12-5 with a 2.23 goals-against average, .926 save percentage and six shutouts in leading the Irish to the Frozen Four, where they lost in the semifinal game to eventual national champion Denver.

The Waterloo, IA native also stopped 87 shots in a 4-3 five overtime loss to Massachusetts during the first round of the 2015 Hockey East tournament, the longest college hockey game ever played. Five of those saves are viewable here:

This is obviously big news for a team that has been making an effort to rebuild its pipeline in net for the better part of the last two years in the wake of departures (Jonathan Bernier, Martin Jones, J-F Berube, Patrik Bartosak) that depleted the organization’s halcyon days of goaltending. The Kings were a finalist for free agent Alex Lyon, the former Yale goalie who signed with Philadelphia in April, 2016. They traded for former Dallas first round draft pick Jack Campbell last summer, and the goalie turned in a promising season as AHL-Ontario’s starter and will compete for a role as Jonathan Quick’s backup in 2017-18. Los Angeles also drafted Matthew Villalta in the third round out of OHL-Sault Ste. Marie last weekend to fill a hole at the amateur level. Petersen’s arrival would add another touted goaltender near the top of the chain; Vogl noted that Petersen was “in line to be the starting goaltender in Rochester,” Buffalo’s AHL affiliate.

This is also another representation of the pull at the top of the Kings’ organizational structure. With a pair of Hall of Famers leading hockey operations – or, in Robitaille’s case, the entire organization – the team clearly has the eyes, ears and respect of a number of prospects and free agents at all levels, and isn’t to say that two-time Stanley Cup champion Dean Lombardi didn’t. But this also applies to Joe Thornton, who will seriously consider signing with Los Angeles on July 1 should he not come to terms with San Jose on a new contract before then. It’s especially interesting when considering that Chicago, which has done a good job luring free agents and has obviously also had tremendous organizational success this decade, was also expected to be a major player for Petersen. The Kings’ ability to develop goaltenders also serves as a major selling point. Under Goaltending Coach Bill Ranford, Jonathan Quick has emerged as part of an extremely select group of NHL goaltenders, and the success engineered by Martin Jones, Ben Scrivens and Peter Budaj – two undrafted goalies and a tricenarian coming off a winless season in the AHL – certainly serves as selling point. Dusty Imoo in goaltending development also deserves credit for his work with Jack Campbell this past season, rounding out a successful staff.

More on Petersen via The Players Tribune, Dobber Hockey, Hockey’s Future and Die by the Blade. The Buffalo News does a wonderful job in all facets of Sabres coverage, and a quick “Cal Petersen Buffalo News” search provides additional resources. 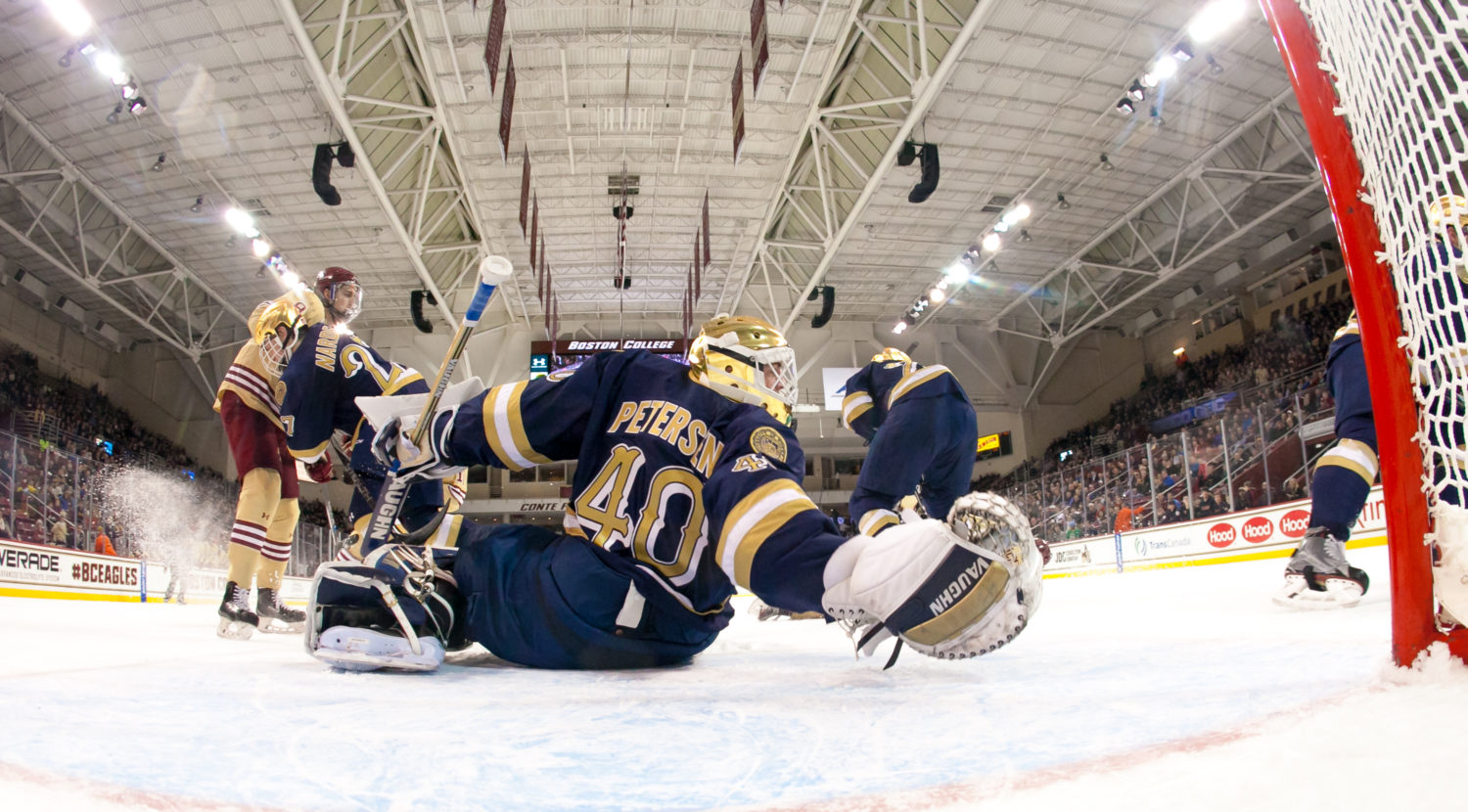