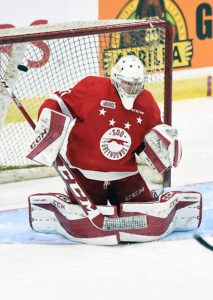 Via Peter Ruicci of the Sault Star:

“Matt had a great second half of the season, and as an undrafted player, he kind of came out of nowhere,” the GM said. “That didn’t help him early in the year. But obviously, his numbers speak for themselves. His play down the stretch put him on the map for a lot of NHL teams.”

In fact, Raftis spoke of how a number of NHL clubs have requested video of Villalta.

“He’s been getting a lot of attention lately,” added Raftis, who said trying to figure out at which point of the draft Villalta may be taken is difficult. “It’s hard to pinpoint a round for goalies. Typically, a couple go early and then it’s all over the place.”

Villata was ranked twice as the CHL goaltender of the week: November 14-20 | February 27-March 5