Vilardi talks about getting drafted; Futa describes his skill set 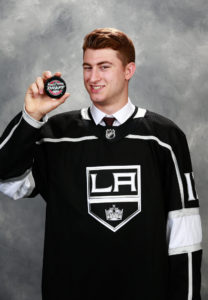 Gabriel Vilardi, on how it feels to be a King:
No words really can describe it. It’s just an amazing feeling right now. I’m really looking forward to hopefully going to L.A. really soon here.

Vilardi, on the feeling of hearing his name called from the stage:
It’s joy. All your life you work so hard for this, and to finally hear your name called, it’s just an amazing feeling, and to have it with your family there too [is amazing].

Vilardi, on being drafted by the Kings shortly after winning the Memorial Cup:
It’s been pretty hectic, that’s for sure. It’s been so much fun, and it just keeps getting better right here.

Vilardi, on whether playing until the final day of the Memorial Cup helped showcase his ability:
Yeah. I play to win there, and obviously to win the Memorial Cup, not too many draft-eligibles can say they’ve won that, so it was a great tournament for myself and the team. It was an amazing experience.

Vilardi, on his playmaking and ability in all three zones:
I think I can play, like you said, in all three zones. I think I’m pretty smart. I see the ice very well, I think. Just a hardworking guy. That’s my goal and my work ethic and I’m going to continue to work hard here.

Vilardi, on being comfortable with the puck deep in the offensive zone:
I think it’s just a mature work ethic and I work on that a lot, so I take pride in that. Like you said, I think it’s one thing I’m very good at, so I’ll continue to work on it.

Vilardi, on visiting Wrigley Field and this week’s experience with his family:
It’s been a great experience. It’s the first time for my family in Chicago, so it’s been a lot of fun just going around the city. It’s pretty cool to see. Now we get to go to L.A., so I’ve got a good mix here with Chicago and L.A. It’s been amazing this year, that moment with my parents was great.

Vilardi, on whether he’s ever been to Los Angeles:
No, I’ve never been. I’m really looking forward to it.

Vilardi, on watching Los Angeles’ big centers in Anze Kopitar and Jeff Carter:
Yeah, I watch Kopitar a lot. I really like the way he plays. I think some of his attributes are similar to mine. I think he’s so smart with the puck, he’s tough to knock off the puck. I can’t wait to go there and hopefully meet him and try and take whatever I can from him and apply that to my own game.

Vilardi, on whether he had an inkling he might be drafted by Los Angeles:
I had no idea coming in. I’m really happy it’s L.A. I’m really looking for it. [Reporter: Did you speak to them often?] To be honest, I don’t remember. I talked to a lot of teams, so I don’t remember, but I’m happy.

Vilardi, on the number of former OHL players in Los Angeles:
Obviously, like I said, L.A.’s a great franchise and there are a lot of great hockey players, so I’m looking forward to heading out there and meeting some of the guys.

Michael Futa, on Gabriel Vilardi’s skill set, and critiques of his skating:
We were looking to upgrade our skill. This kid, it’s a package of a big kid with just an incredible skill set, and he’s a winner. Our guys, they have him as an average-plus skater. I mean, it’s not a kid that’s a blazer, but this is a kid that has never had any probable getting around the ice at any level he’s been at, and again, our guys are absolutely thrilled. It’s one of those things when you’re looking at your list, we had him rated much higher, and it was good emotions at the table when we found out we [might have the opportunity to draft him]. It’s just one of those things when you go you’ve got to trust your list, and I know Mark Yannetti and the guys have just done such an incredible job, and how much time goes into it that when you have a guy that drops that far to you, you’re thrilled. You’re not worried about anything any [issues]. Our development team is going to get to certain areas of his game that he needs to work on. It’s just an unbelievable thing to get a kid that is not only established, but he’s a champion.

Futa, on Vilardi’s leap from the regular season to the Memorial Cup:
He was actually banged up during the year, which was a little bit of a setback for him. But the team itself really had a battle with the London Knights. It was one of those Western Conference [battles] in the Ontario Hockey league. … It was one of those things that they completely battled each other a long ways. I thought he had a great series against London. The games that I had seen – we saw a bunch of tape on him – and then up on the biggest stage he took it to another level. It’s a credit to the whole organization with Warren Rychel. The job they did to keep that team prepared to play, but at the Memorial Cup, as the draft eligible, he was outstanding again. For a young guy to get another swing of things in a tournament of that magnitude, it only bodes for his character and the expectations we have of him.

Futa, on any surprises in the picks prior to Los Angeles:
No, Luc has been flawless. For me, it’s just been again, it’s been such a refreshing atmosphere, and I think for Luc and Rob to go through their first draft in these roles, I think it’s been good for the guys to see how passionate they are, and I think we kind of set it up there for the kid as well in the photo opportunity. Not only is it obviously going to be a day that the kid’s going to look back on for the rest of his life, but to be flanked by two Hall of Famers who are such a huge part of our organization. It was kind of set up that way for the kid to have that moment, to capture it for him. We’re proud of it. Again, we’re very enthusiastic. We’re looking for a bunch of different opportunities to add offensive skill, and clearly we feel that we made a huge step in that direction today. 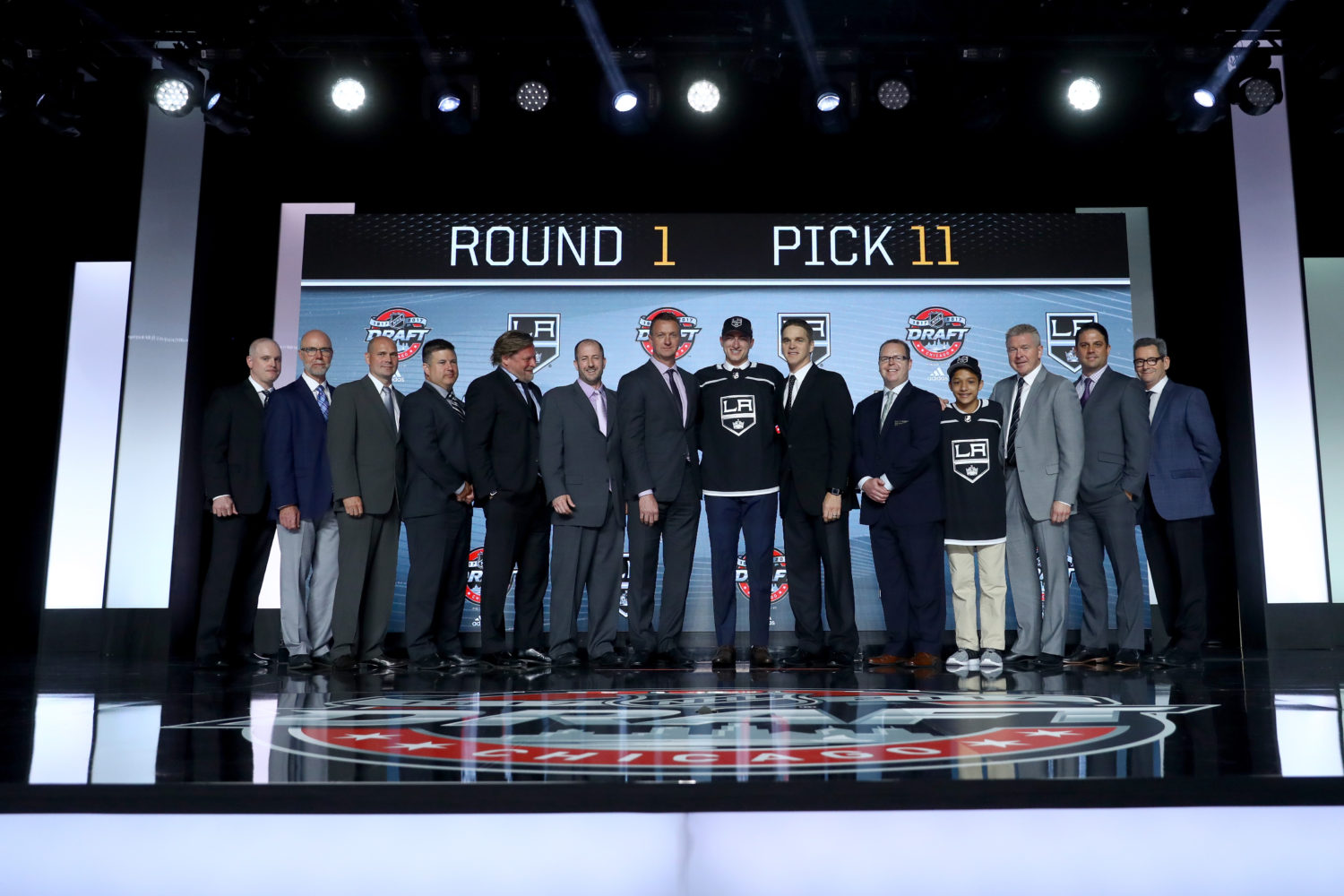