Indications are that Vegas has selected McNabb 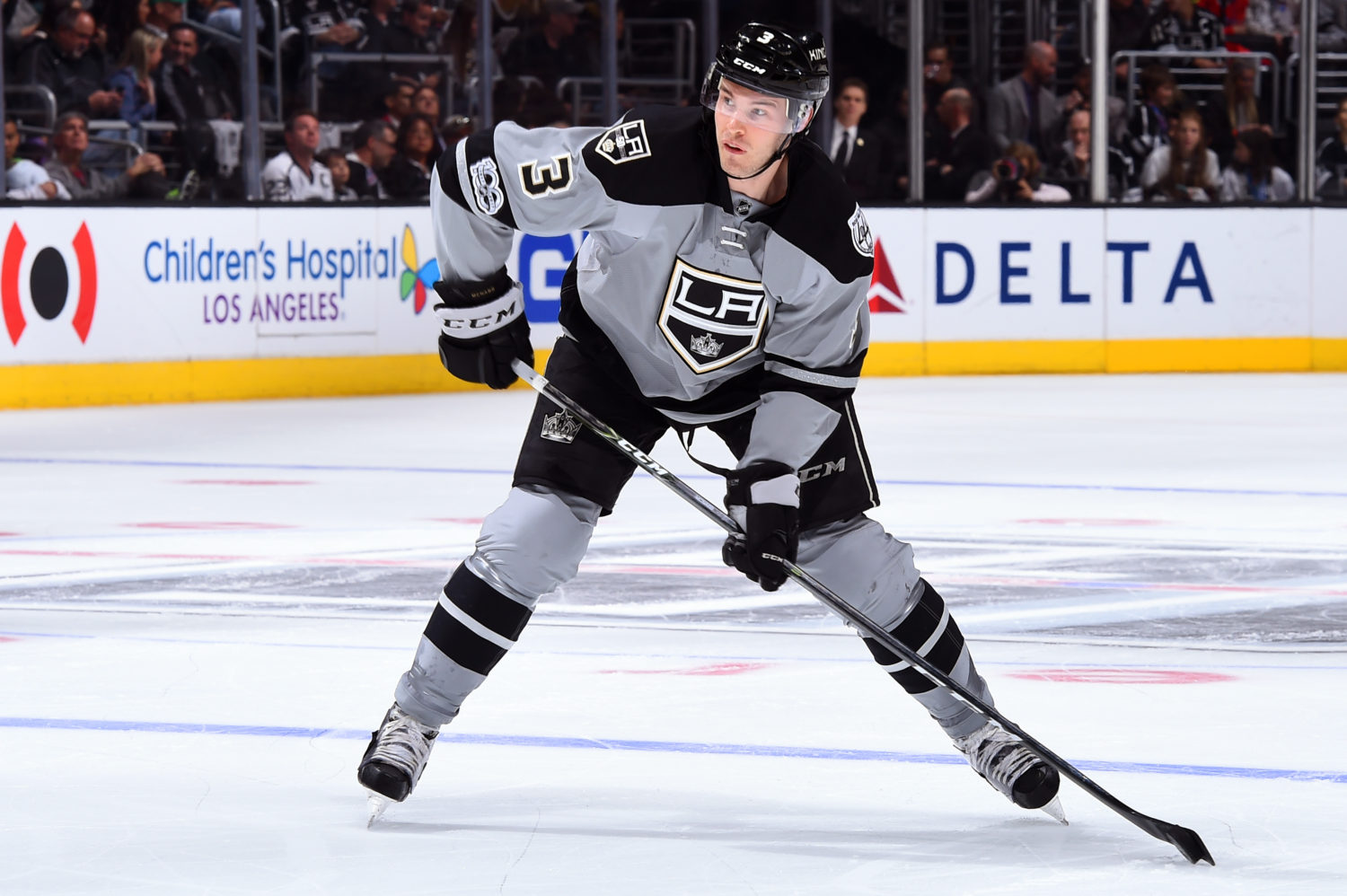 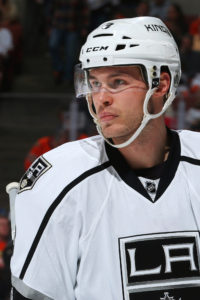 Though the Kings are unable to confirm the information out of deference to the Vegas Golden Knights reveal party during tonight’s NHL Awards, there are indications that Vegas will select heavy hitting defenseman Brayden McNabb from Los Angeles’ roster. I do not believe there were any side deals etched out with Vegas, and as noted last week, the plan for expansion was simply to lose a player and move on. So it goes.

The Kings were in a position to be less impacted by expansion than most NHL teams, but the loss of any player hurts the club, and the subtraction of McNabb, who struggled with consistency after his return from a broken collarbone last season, has an effect on the team’s NHL-tested defensive depth. There are mitigating factors, though, that make this loss somewhat easier to digest than certain other players. First, there are others, such as fellow left-handed defenseman Derek Forbort, who have passed him on the depth chart. Kevin Gravel, who can play both sides, and Paul LaDue, a right defenseman, have also seen their stock rise to a greater degree than McNabb over the last 12 months, and both are a year younger. And, in terms of depth options, the Kings also signed puckmover Oscar Fantenberg from the KHL, and his likelihood of earning a spot on the team grew with the news of McNabb’s potential departure.

Secondly, this gives Los Angeles a little bit of cap relief. Though other teams will receive more relief by virtue of Vegas’ selection, putting the defenseman’s cap hit back in the overall pool is significant. McNabb was due to become an unrestricted free agent on July 1, 2018, and carries with him a $1.7-million cap hit. With his departure, the Kings would have $64.31-million committed to 16 players who are currently under contract for 2017-18, based on financials provided by Cap Friendly. That figure includes the contract for Adrian Kempe, but not Fantenberg or Jeff Zatkoff. It also includes Mike Richards’ cap recapture and termination penalties, as well as Matt Greene’s buyout. With that figure, Los Angeles has roughly $10.69M to allot to up to between four and seven players (though likely seven) via extensions, trades and free agency (and the highly unlikely scenario in which a 2017 draft pick makes the opening night roster). Jonny Brodzinski, Andy Andreoff, Nick Shore, Kevin Gravel, Michael Mersch and Paul LaDue are among the restricted free agents who will need new contracts.

Other teams will also be losing players that will free up cap space, but losing McNabb, at a position where the team was able to establish satisfactory depth a season ago – a major question mark heading into the year and one of the few positives to come out of the 2016-17 season – is more desirable than losing Nic Dowd, a center who plays at a position where the Kings’ depth is not as good and someone who carries an extremely manageable $640K cap hit, as well as players such as Trevor Lewis and Nick Shore. While there are those who’d wondered whether the Kings could be relieved of Dustin Brown’s $5.875M cap hit through 2022 and Marian Gaborik’s $4.875M cap hit through 2021, every indication I’d received over the last year and a half made it clear that Vegas was never interested in absorbing either player’s contract. The Kings, who do not have a well-stocked prospect pipeline as of now, were right to not attach high draft picks and/or prospects to entice the Golden Knights to select Brown, while the thought of using assets to incentivize Gaborik’s selection was apparently a conversation that did not last long. Prior to Las Vegas even being awarded a team, there were no trade possibilities involving either player that made any sort of sense for the Kings to execute.

It is not certain that Vegas will keep McNabb, as Chris Johnston notes.

The players currently linked to Vegas’ blue line, based on league reports, include McNabb, Marc Methot (from Ottawa), Alexei Emelin (from Montreal), Clayton Stoner (from Anaheim), David Schlemko (from San Jose), former Kings prospect Colin Miller (from Boston), Griffin Reinhart (from Edmonton) and Deryk Engelland (from Calgary). Several players, such as Stoner, were arranged in incentivized deals so that the Golden Knights would not select particular players. Vegas GM George McPhee will be in a position to reap a bounty of draft picks and additional assets to be able to move several of these defenders to other teams once tomorrow’s trade freeze is lifted at 5:00 a.m. PT.

McNabb, 26, totaled two goals and four points in 49 games last season as his ice time dropped from 18:49 in 2015-16 to 15:04 in 2016-17, a decrease heavily impacted by Forbort’s ascension to the Drew Doughty pairing. McNabb had done an excellent job over the first month of the season skating to Doughty’s left, but did not maintain his raised play after returning from a broken collarbone he suffered in St. Louis in late October. Acquired from Buffalo as a top AHL defenseman along with the contract of Jonathan Parker and two second round draft picks (which later became Alex Lintuniemi and Erik Cernak) for Nicolas Deslauriers and the rights to prospect Hudson Fasching at the 2014 trade deadline, he was expected to provide defensive depth and gradually grow into a sturdy and physical rotation player. He has by and large done that, though his skating ability has put a ceiling on his expected development, and though he topped out at two goals and 24 points during his 23-year-old 2014-15 campaign, his offense hasn’t come around to the same degree as it did in junior hockey and the AHL. McNabb has worked with former Olympic speedskater Dave Cruikshank to improve his skating, and there have been some improvements, but the biggest factor keeping the 6-foot-4, 216-pound defender from becoming a consistent top-four force has been his footwork. He was originally selected by Buffalo in the third round in 2009.

McNabb was very good at driving play in 2016-17, though he faced opponents who were not strong in possession and started a disproportionate percentage of shifts in the offensive zone. His raw 60.3% Corsi-for ranked third in the league behind Patrice Bergeron and Brad Marchand.

Here’s the best personally to McNabb, who has always been a friendly, intelligent, low-maintenance, well-liked and well-composed figure in Los Angeles’ room. 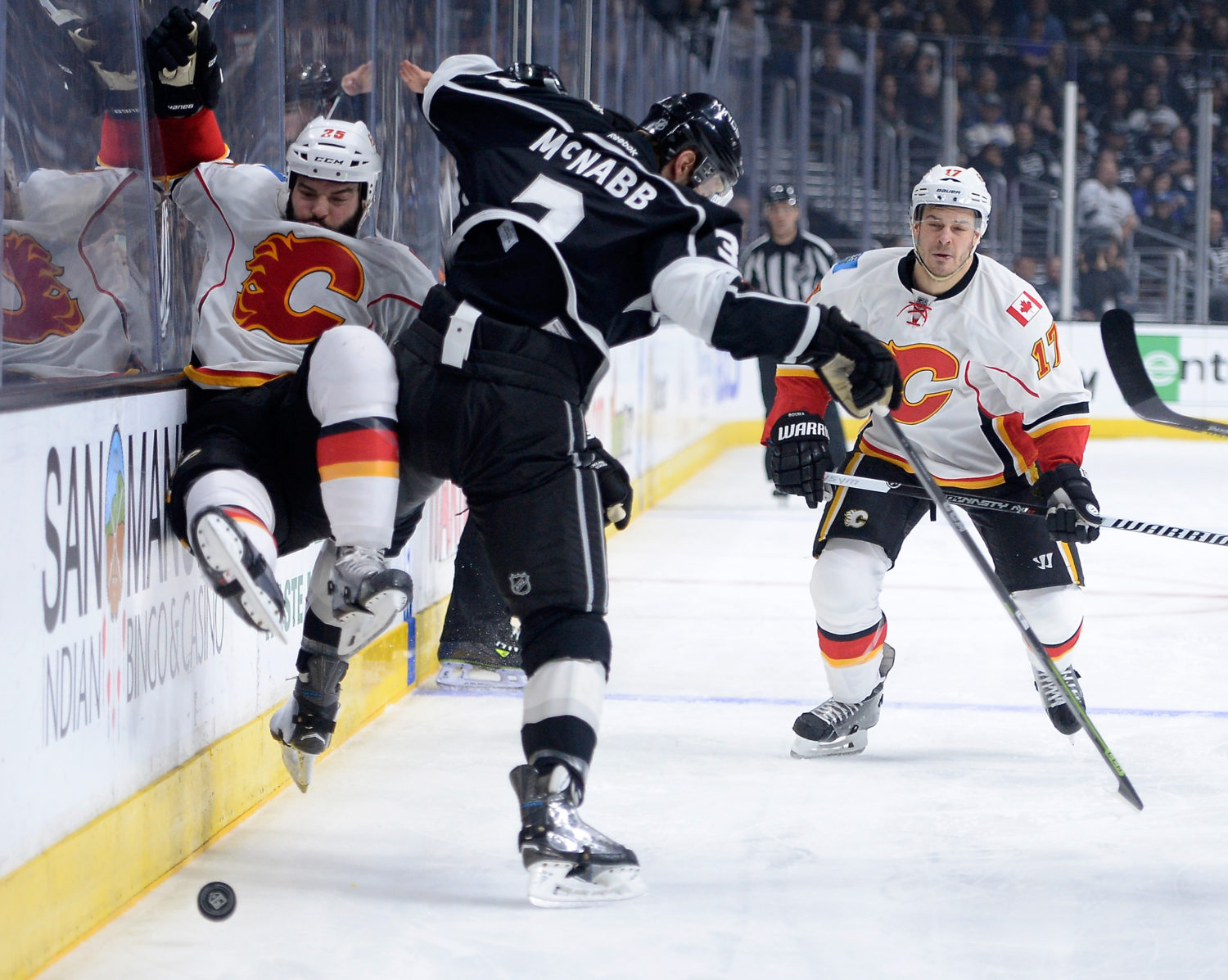