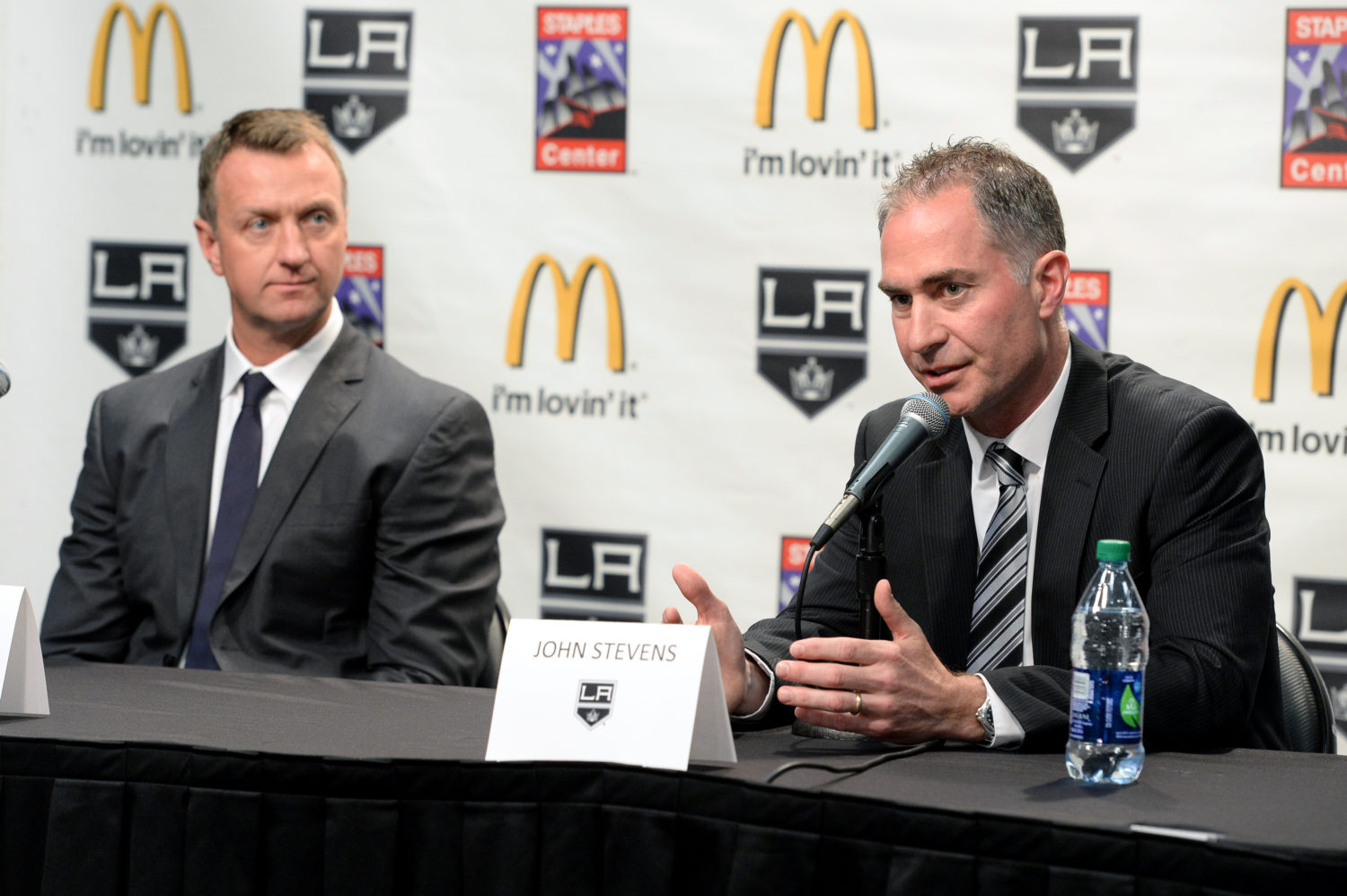 COACHING. While Rob Blake was speaking with John Stevens for the better part of the last two weeks, the conversations didn’t really take the form of a job interview, according to the Los Angeles Kings’ new general manager. “I’ve heard the word ‘search’ for a long time. There was literally no search,” Blake said. “It went to John as soon as the changes were made and [we] expressed our interest, and we sat and we kind of went over a game plan as a review of last year, but also some of the things John’s touched on offensively – the style of the game that’s being played, the direction of the game, and what we could accomplish to suit that, and the details on the offensive front that will be installed.”

Stevens’ familiarity was a strong asset, but Blake also wanted to know more about the attacking philosophies of a coach that primarily ran the team’s defense and penalty kill. So as part of their discussions over the past two weeks, there were conversations and studies on the styles and systems that Stevens would want to implement, and how they could be used to increase the scoring of a team that ranked tied for 24th in the league in scoring in 2016-17.

“…When we talk about the review of the season, there’s lots to go into how you score goals and when you break it down and you find out the categories that we were lacking in,” Blake said. “I wanted to make sure that the philosophy and the structure and the detail that he wanted to incorporate into the team led to helping increase that, because at the end of the day that’s the way you’ve got to do it.”

While Stevens has drawn praise for his ability to develop defensemen and has earned the reputation as a strong tactician, a central tenet of successful coaching is building a bond with players that can help facilitate a buy-in from all corners of the dressing room. As much as there are X’s and O’s, there is still a raw, human, emotional aspect central towards getting players to maximize their skill sets.

Describing recent weeks as “a tough end to the season emotionally,” Stevens spoke about the relationships he forged with those he had found success with, some of which are no longer with the organization. That’s not easy to move forward from. “But getting the opportunity to stay here and take over, probably the biggest thing you need to do is establish a really good relationship with your players and you certainly have a long-standing track record with these players. We know them very well. They know me very well,” he said. “The rest of the staff is going to have to do some work in terms of relationships but I do think that is a real bonus. A lot of these guys have been here for seven years and have been through a lot and went all the way to the top and then pulled back so I’ve spent a lot of time with these guys. And to me that’s probably the most important thing, is that relationship of trust, so you can be demanding but you can be honest and we can all pull for the same reason, so I do think that’s a big plus.” 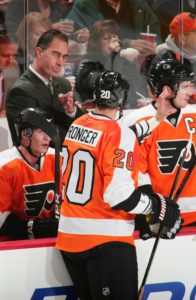 Stevens said that he has done some reflecting over the past week and the path he has tread as a coach, from working as an assistant under Ken Hitchcock in Philadelphia, to becoming the Flyers’ head coach, and then moving on to work with Terry Murray and Darryl Sutter in Los Angeles. These experiences have helped shape Stevens as a coach, and if there’s one thing that he’s come to realize over his career, it’s that relationships matter.

“I think you learn a lot from all the people you work with. I know I really tried to be a student of the game,” he said. “That’s why I was so excited to work with Darryl and the experience and success he’s had. I think early on as a coach I was a real X and O guy. I was going to teach the game and I saw it on the board. And then I soon realized that relationships are probably just as important as X and O’s and the spirit of your team. And I think through all the coaches, and certainly with Darryl, just how important it is to push your team emotionally, keep them in a good place, and that’s probably a part of the game I pay more attention to today than I did 10 years ago.”

MANAGING. The Buffalo Sabres have an opening for a general manager, and there have been rumblings that they could look to Dean Lombardi to fill it. (A report last week that they had already met was shot down by Sabres owner Terry Pegula.)

On Monday, Blake said that while the Kings hadn’t been contacted by any other teams regarding Lombardi’s services, that they would give permission if it was requested. (Because he’s still under contract with Los Angeles, the team would still need to sign off on any overtures.)

Hearing the interview process has begun in Buffalo for GM.

Just talked to the Kings. Still no request to talk to Lombardi.

“I would like to thank Dean and Darryl,” said Stevens, who has also met with Sutter during the coaching transition. “I have an enormous amount respect for both those men. It’s been an amazing experience working with them, and I know they made me a better coach and a better person, and I’ll be forever grateful to them.” 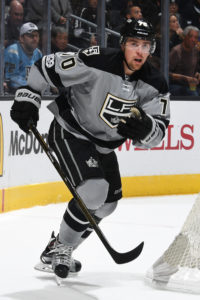 On whether there would be “issues” in coming to terms with Tyler Toffoli on a new contract, Blake got a rise out of the group of reporters.

“I don’t know,” he said. “There’s issues with everybody’s contract at some point. I’m probably one to speak.”

But the need to get both Toffoli and Tanner Pearson under contract is clearly near the top of the list of the new general manager’s off-season checklist. The team is not in a position to lose what offense it has, but over the course of the last nine months, firmly encouraging signs have been few and fleeting.

Prior to the start of the 2016-17 season, conversations between LA Kings Insider and Dean Lombardi did not paint the rosiest picture of the team’s ability to resign both of their young forwards who have emerged into skilled, high-importance, top-six goal scorers. Further correspondence indicated things might’ve been looking up in mid-December, when the possibility of inking one or both players to shorter-term deals were broached. But that never happened – both players signed short-term “bridge” deals in their most recent contracts, and are expected to be looking for greater term on their next deals – and late-season check-ins indicated that nothing substantial was stirring on the contract front. 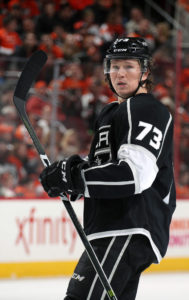 But Toffoli’s agent, Pat Brisson of CAA, also represented Blake during his Hall of Fame career, and both Brisson and Blake, as well as President Luc Robitaille, are friends outside of hockey who also have strong ties to the LA Junior Kings. Brisson also negotiated Anze Kopitar’s new contract with L.A.

“With Pat, Luc and I, and I experienced it through Anze Kopitar, too, … you know what limits are and you know, ‘OK, listen, let’s let down and get all the other stuff out and let’s get this deal done,’” Blake said. “Yeah, Toffoli and Pearson, they’re priorities right away here to get done.”

As for the possibility of Jarome Iginla resigning with the club, Blake said he wasn’t sure whether the two parties would extend their partnership for another year but did hint at conversing with the future Hall of Famer to see if there was mutual interest in extending the partnership. Iginla seemed to be open to the possibility of playing another year in Los Angeles, but also said “I don’t know if they’re an option from their point of view” after the season finale in Anaheim.

“I’ve talked to Jarome and he’s kind of hinted at possibly playing,” Blake said. “I think what happened was when he got traded here, I’m not so sure that he was 100% that he wanted to play after this year. I think you saw a very competitive player. Listen, he came in and did things that you could only wish that all your players had those intangibles. And we’ll have to sit with Jarome and get a good sense and then also to see if it’s a fit on this team. I think it was a fit at that time, for sure. Unfortunately, we didn’t get accomplished what we wanted to to help him, too. Being in the playoffs would’ve been… But his intangibles, he’s as competitive a guy as they come right now.”

20. Los Angeles reached out to University of Denver head coach Jim Montgomery about joining John Stevens on the bench. That won’t happen, but it gives you an idea into what they are thinking. There are rumblings Montgomery will meet with Florida this week. Very serious candidate. Dave Hakstol set a high bar when he left North Dakota for about $2 million per season in Philadelphia. That might be what it takes to get Montgomery. 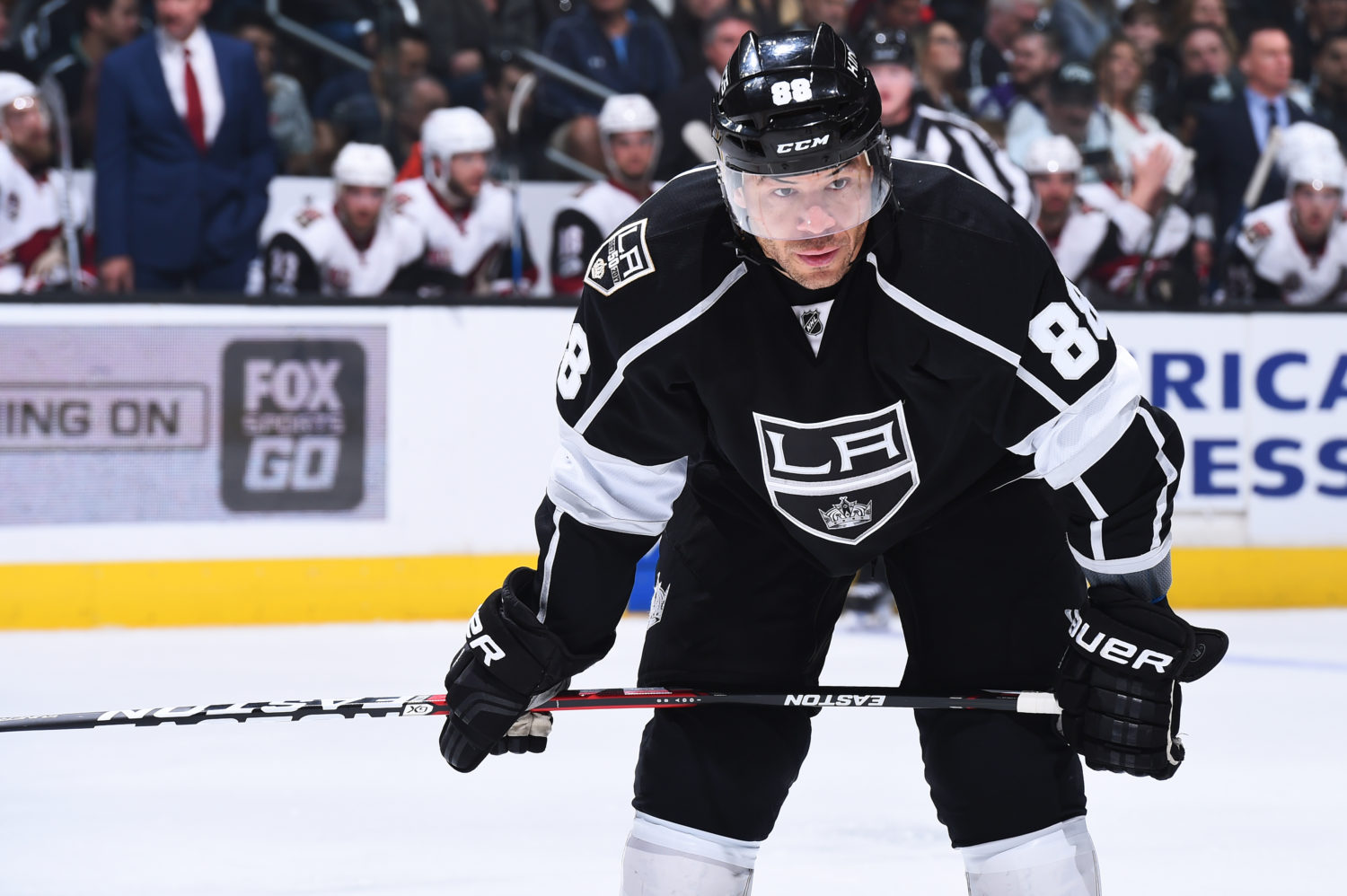