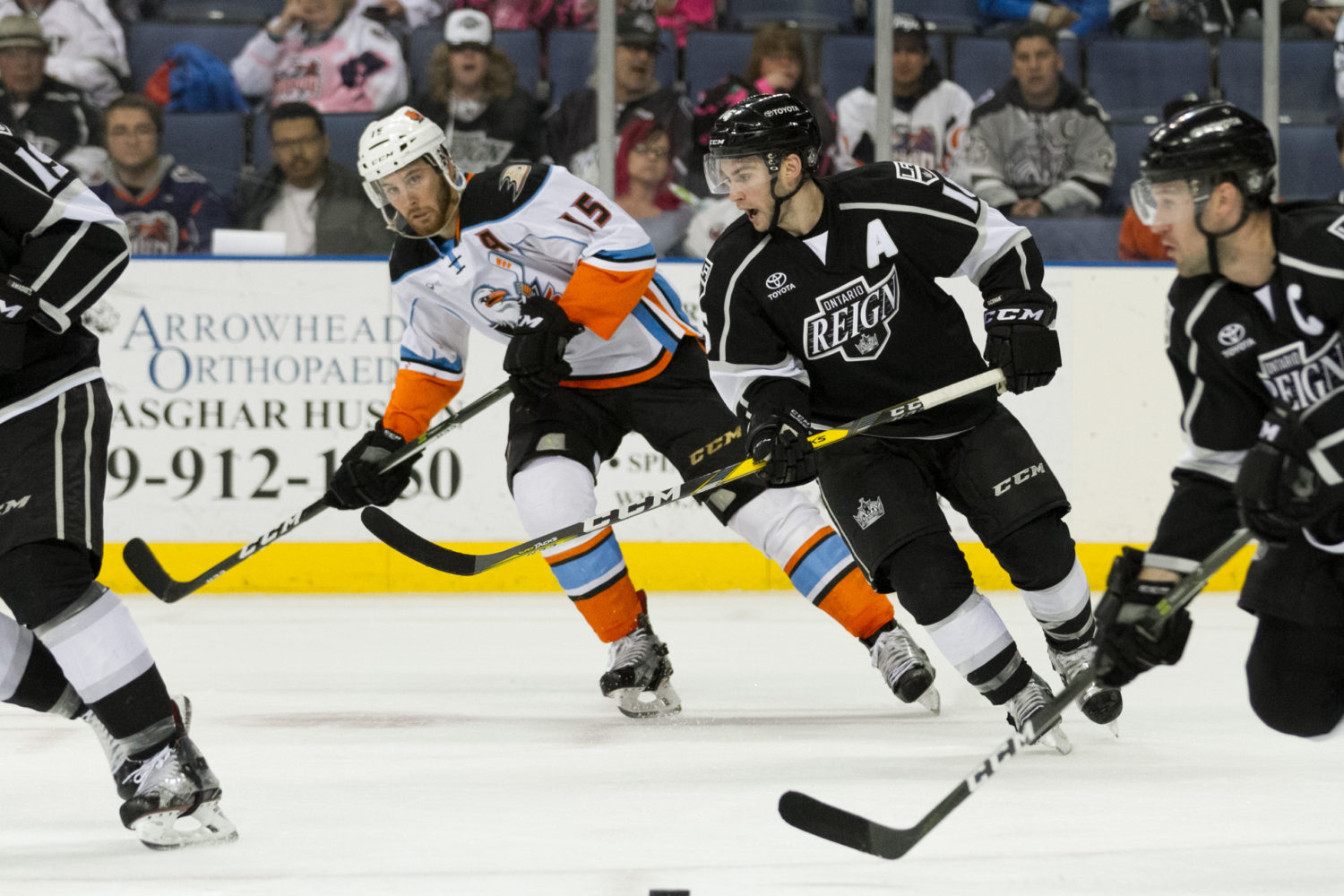 –Brett Sutter recorded his 18th goal of the season on the power play.

–Goalie Jeff Zatkoff made 12 saves on 15 shots as his record fell to 2-3-1-1. It was his first shootout loss with the Reign.

–Mike Amadio registered his 16th goal of the season and added an assist. He now has four goals and two assist in the last four games.

–The Reign outshot San Diego 35-15 and were led by Damir Sharipzianov with five shots and Sean Backman and T.J. Hensick with four shots each. Four players on the Gulls recorded two shots.

-Three game misconducts were given out during the game. Joel Lowry and James Melindy were each sent off with 10-minute misconducts for fighting at the drop of the puck, and Cam Schilling was sent off for a spearing misconduct in the third period. The game finished with 69 penalty minutes, including two fights.

-As mentioned in this morning’s skate notes, the group of regulars that sat out against Stockton are expected to return to the lineup against San Diego.

-Forward Matt Luff, who made his AHL debut against Stockton on Wednesday, is a healthy scratch against San Diego.

-Forwards Mike Amadio and Philippe Maillet each recorded a goal and an assist in Wednesday’s win over Stockton. Maillet now has four points (2-2=4) in six games with Ontario. In his last three games, Amadio has three goals and an assist.

-Forward Jonny Brodzinski has eight points (three goals, five assists) against the Gulls this season and forward T.J. Hensick leads all skaters in the series with four goals. Forward Corey Tropp leads the Gulls with one goal and four assists against Ontario this season.

-Defenseman Jaycob Megna, who was reassigned to the San Diego Gulls on Tuesday, leads all AHL skaters with a plus-34.

-San Diego earned home-ice advantage with their 5-1 win over the Bakersfield Condors on Wednesday night. The best-of-5 first round series will feature a 1-1-1-1-1 format, with each team taking turns hosting games. The first game is Friday, April 21st at 7 p.m. PT. The Reign defeated the Gulls in the best-of-seven Pacific Division Finals last season, 4-1.

-The team that scores the opening goal has earned at least a point in every game in the regular season series. Ontario is 5-0-1-0 when scoring first, and San Diego is 3-0-0-1.

Sorry, the comment form is closed at this time.