Back in Ontario, Brodzinski, LaDue and Kempe get second chance at playoff run 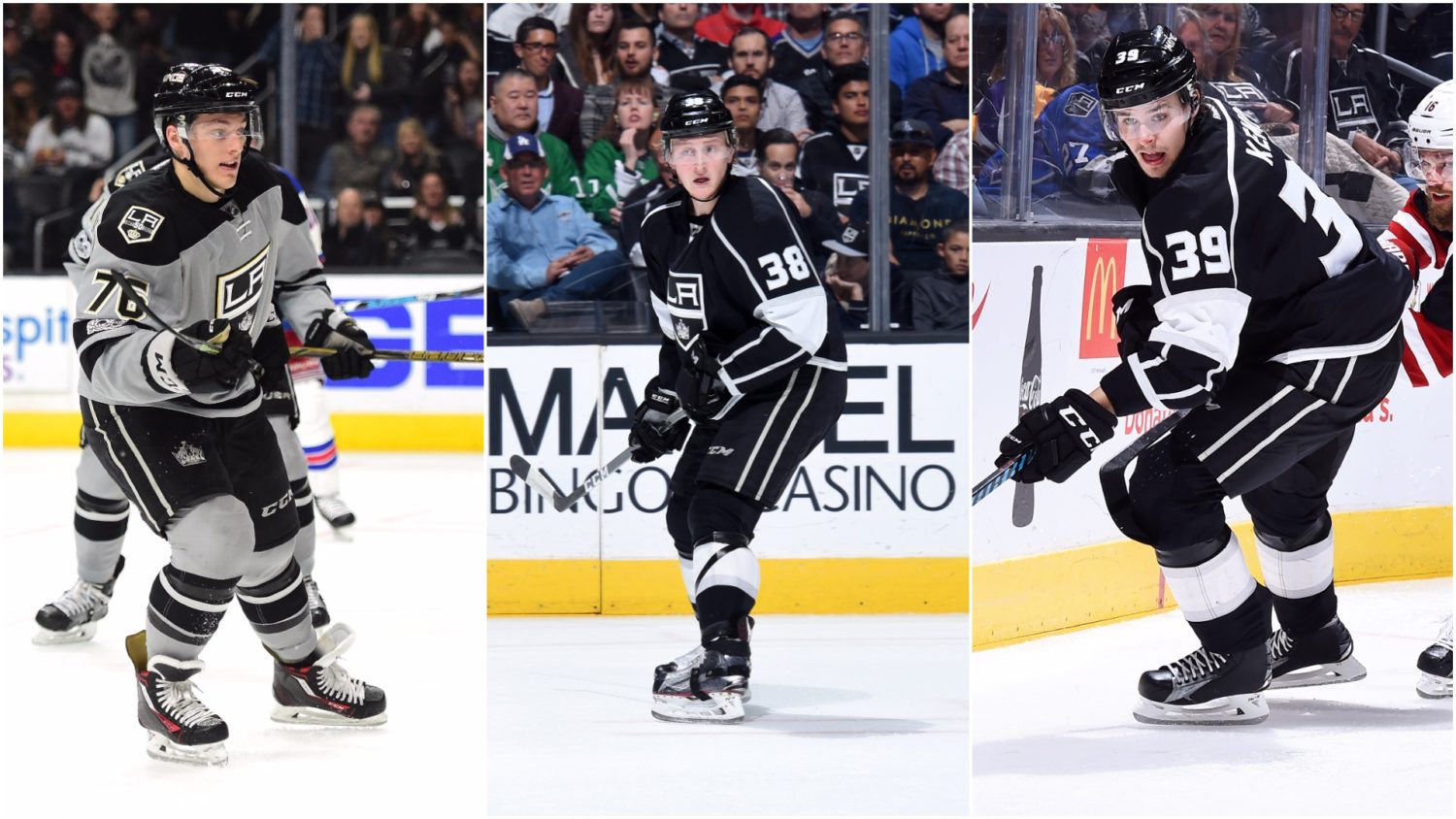 Three of the Reign’s top players in Jonny Brodzinski, Adrian Kempe and Paul LaDue had been living the hotel life in El Segundo near the Kings’ training facility during their recalls with Los Angeles. But as the Kings missed the postseason, they were all eligible to return to Ontario with chance at a different playoff run but a playoff run nonetheless.

“Each situation is unique but again, these guys played the majority of the season here and it’s not like they’ve got to go cross-country and play,” Reign head coach Mike Stothers said. “They’re familiar with the surroundings here. They just want to play. Nobody’s really happy being done in the middle of April. You want to play as long as possible. Gives them an opportunity to keep doing that and it gives them an opportunity to grow. Playoff experience is very valuable, whether it’s in the American League or in the NHL. It’s only going to make them better.”

The three partook in their first practice with the team on Tuesday, then boarded the bus to Stockton where they’ll play at 7 p.m. on Wednesday night. The Reign have just two games from there, a home-and-home against San Diego, who they’ll face in the first round beginning next week.

“Of course it was tough that the Kings didn’t make the playoffs but I’m excited to be back here and to play playoffs,” Kempe said. “I don’t want the season to be over yet so I’m really excited to be back and play some more games.”

Added LaDue: “It’s great. Obviously I played most of the season here. I know all the guys and we’re been fighting for this for a long time here and it’s finally here. All the guys are excited and it should be a good time.”

In reality, all three have been presented with a second chance at a second season with the team they started with. They’re going from a learning environment to one where they’re expected to lead they way and play important minutes.

“I’m excited,” Brodzinski said. “Going from not playing a lot up there, a lot the first couple games but then not a lot at the end, and now coming back here, being on the power play again, getting the minutes again. It’s going to be a lot of fun. I can’t wait.”

When Brodzinski left in late March he was leading the Reign in goals with 25. That number still stands. LaDue got into 22 games with Los Angeles and Kempe 25. Now the task is using what they learned to continue to elevate their game.

“I think getting used to the game out there really helped,” said LaDue. “It’s a fast game and you’ve got to be sharp every shift out there. It’s kind of the same down here in playoffs. It’s going to amp up a little bit once playoffs start and it’s going to be a fast game, gotta make quick decisions and I think that will help a lot from those 20 games I played up there I think hopefully will carry over and we can get a few wins.”

It’s just day one, but Stothers seems encouraged by the spirits of the three players, that being of excitement rather than disappointment.

“They all seemed to enjoy the experience,” Stothers said. “The good thing is all three of them seem to be pretty excited to be back and still playing. That’s good. I didn’t expect differently with those three, they’re good kids.”

But wait … If there was an afterglow of the NHL, Stothers is ready to get that right out of his players.

“Get that NHL right out of them,” he said. “This is no charter. This is a bus. It’s one long runway from here to Stockton. Better they get used to life in the American Hockey League the sooner the better. In all honesty they haven’t played all that much either. And they are young, so again, get acclimated to the American Hockey League, get acclimated to your teammates — some of them are new to them with the kids out of junior, college guys. This will be a good game to see the leadership out of those three.”

Brodzinski, on the biggest thing he learned in the NHL:
I just think the preparation. The game speed is a lot higher, but I wouldn’t even say that’s the biggest thing, I think it’s just you have to be alert at all times, you have to be into the game, you have to be prepared at all times because every play is so meaningful at that level and you make one mistake, guys can capitalize. It’s so easy. Everything’s magnified so one mistake you could be out the next game. I just think every play is so important and your brain’s gotta be on all the time.

Kempe, on what he learned about the NHL game:
You’ve got to be on your toes right away coming to the game if you want to stay playing the whole season. The time I was up there you’ve got to be 100 percent every shift. Obviously sometimes you’re going to make mistakes and everything, you’ve got to give 100 percent for the team and be on your toes all the time. You can’t take any shifts off. The experience was very good that I have a couple games in my legs before I get down here and play and hopefully I can bring that to the game here.

Kempe, on what he wants to bring to Ontario:
I think I’m going to try to be just a better player than I was before I got called up. I have some games in the NHL now and hopefully I can take that with me and show it on the ice and use my speed and be a really good and important player for the team. Try to lead by example on the ice. That’s what I want to do.

The Kings’ announcement of head coach Darryl Sutter and President/General Manager Dean Lombardi being relieved of their duties on Monday came as a surprise to Stothers, who’s in his third season coaching the organization’s AHL affiliate.

“I think it caught us by surprise,” he said. “Things happen when you don’t win. Doesn’t make it any easier. It’s an awful thing when anybody loses their job. You never get used to it because you know how passionate those two individuals are about the game of hockey and the work and effort they’ve put in.

“It’s disappointing. It’s a tough day for everybody, but the old cliche is, it’s part of the business. It’s the business we chose. We all know that we have a shelf life. All of us know that, if you don’t then you’re foolish. They did a great job. Two Stanley Cups to show for it. I don’t imagine Dean or Darryl, should they so choose, will be out of work for very long.”

For the players from Ontario who went up to the Kings this season, it’s their first major experience of the business side of the game.

Kempe, on the news:
It’s always tough to be a coach. I don’t think there’s many coaches in the world that has been on a team forever. Sometimes that happens and I think the Kings have done great the last couple years and I think Dean and Darryl have been doing great things for the Kings as well. It’s tough but I think they did some great things for the Kings and sometimes you have to make some decisions and that was it this time. We gotta come back stronger next year.

Stothers, on whether the Reign are reacting to the news:
It’s early to tell but I don’t think so. It’s kind of like trades. The trade deadline comes and you could lose one of your best friends or one of your top players and you get somebody else in. I don’t know if we just come hardened to it. It just part of the business and it’s certainly not a reflection on anyone that they failed at their job, it’s just shelf life. They’ll rise above it and be leading behind a bench or from up above. They’ll get another opportunity somewhere else. I guess that’s how you’ve got to look at it. It’s opportunity, growth. Our guys haven’t really said much about it. I haven’t brought because quite frankly it’s nothing that I can control. It’s none of my business. It happened 60 miles west of us. [We’ll] move on.

LaDue, on the news:
You always hate to see that happen to anyone. They were always great to me, a lot of respect for those guys. Wish them all the best and hopefully they have good luck moving forward.