Good afternoon from Toyota Sports Center, where Jesse Cohen, Jim Fox and I just taped the final Saturday Straight up of the 2016-17 season. Here’s a big thank you to Mike Altieri, Steven Dorfman (aka Hoover), Jack Wilson, Ed Lewis, Josh Cooper, Sean O’Donnell, Jim and Jesse for participating in a really fun spot that we all enjoyed taking part in. The final SSU, which will continue Bob-a-palooza Weekend, airs during the first intermission of tomorrow’s broadcast against Chicago.

Line rushes! (If you’re still into that sort of thing):

-Jarome Iginla didn’t participate, but this is probably just because he was taking the option. He spoke to the media after last night’s game and also spoke with Ivan Tchechankov of IIHF.com this afternoon, so don’t sound your alarms. Players who are banged up are generally not made available to the media. Meanwhile, Alec Martinez, who returned to last night’s game in the second period after wearing a first period blocked shot, took part in practice, while Jordan Nolan, who didn’t participate yesterday, did not. Tomorrow’s game is an afternoon game, so the #LAKingsGoalieTweetOff applies. Jonathan Quick was the first goalie off the ice and will be expected to start against Chicago (3:00 p.m. / FOX Sports West / FOX Sports GO / KABC 790 / I Heart Radio).

-Several of us spoke with Darryl Sutter after practice, but no microphones were running. It wasn’t as much of a GET INFORMATION NOW session as much as it was an opportunity to talk about Bob Miller, NHL broadcasting and several potential Stanley Cup Playoff match-ups. After asking Hoover several weeks ago about his Birmingham Patriots hat – as an Encino native I remember attending a few games of theirs some 20 years ago when they were known as the Braves – Hoover presented him with his own Birmingham hat, which he was proud to put on. Among Birmingham’s notable graduates are Terry Gilliam, Michael Ovitz and the late Daniel Pearl.

-Drew Doughty, on potential off-season turnover: “Yeah, it sucks, because you develop such good relationships with everybody in the room and it’s like a brotherhood. You love every single guy that you play with so to see some guys go is going to be really sad and that’s just part of the game. You get used to it as you go. I’ve seen my best friend on the team go before in Wayne Simmonds and it was one of the saddest days I’ve had as a hockey player, so I’m used to it now, but it’s just part of the gig.”

-Indulge me for another moment on Ice Guardians, the feature-length documentary on fighting in hockey that will be screened tomorrow before the Kings-Blackhawks Staples Center finale and will be followed by a special question and answer session with executive producer and co-creator Adam Scorgie, Kevin Westgarth, Luc Robitaille, Jarret Stoll and Matt Greene. Deborah Lew shared a really nice write-up on the making of the documentary here, while tickets for the screening can be purchased here. Proceeds benefit Kings Care Foundation.

-The Blackhawks didn’t dress a number of their stars in last night’s 4-0 loss in Anaheim. Though they canceled today’s practice at El Segundo, it does appear there’s a good chance several key names will return to the lineup tomorrow afternoon.

Via Mark Lazerus of the Chicago Sun-Times:

Quenneville hinted that most of his big-name players will suit up for Saturday’s finale, in an attempt to keep them sharp for Game 1 next week. And while the only games that really matter to the Hawks on Saturday will be played in San Jose and Winnipeg, they’re going to try to treat the Kings game with a little more weight than the previous two on this trip.

Because there’s no easing into things next week.

“You’re playing in the NHL,” Patrick Kane said. “It’s another opportunity to play another game, another challenge. Another opportunity to test ourselves against a good hockey team. I don’t think there’s any motivation problems in here at all. We’ve got a lot of guys that are trying to fill playoff positions, and trying to present themselves to coaches for a spot in the lineup. There’s a lot of motivation for that.”

-I’ll post the details of Bob Appreciation Day tomorrow morning, but take note that fans are encouraged to submit their favorite photos and messages via social media using the hash-tag #ThankYouBob, and a sample of those will be featured in-arena throughout the game. Bob will also address the crowd after the game upon the conclusion of the “Jerseys Off the Back” on-ice presentation. 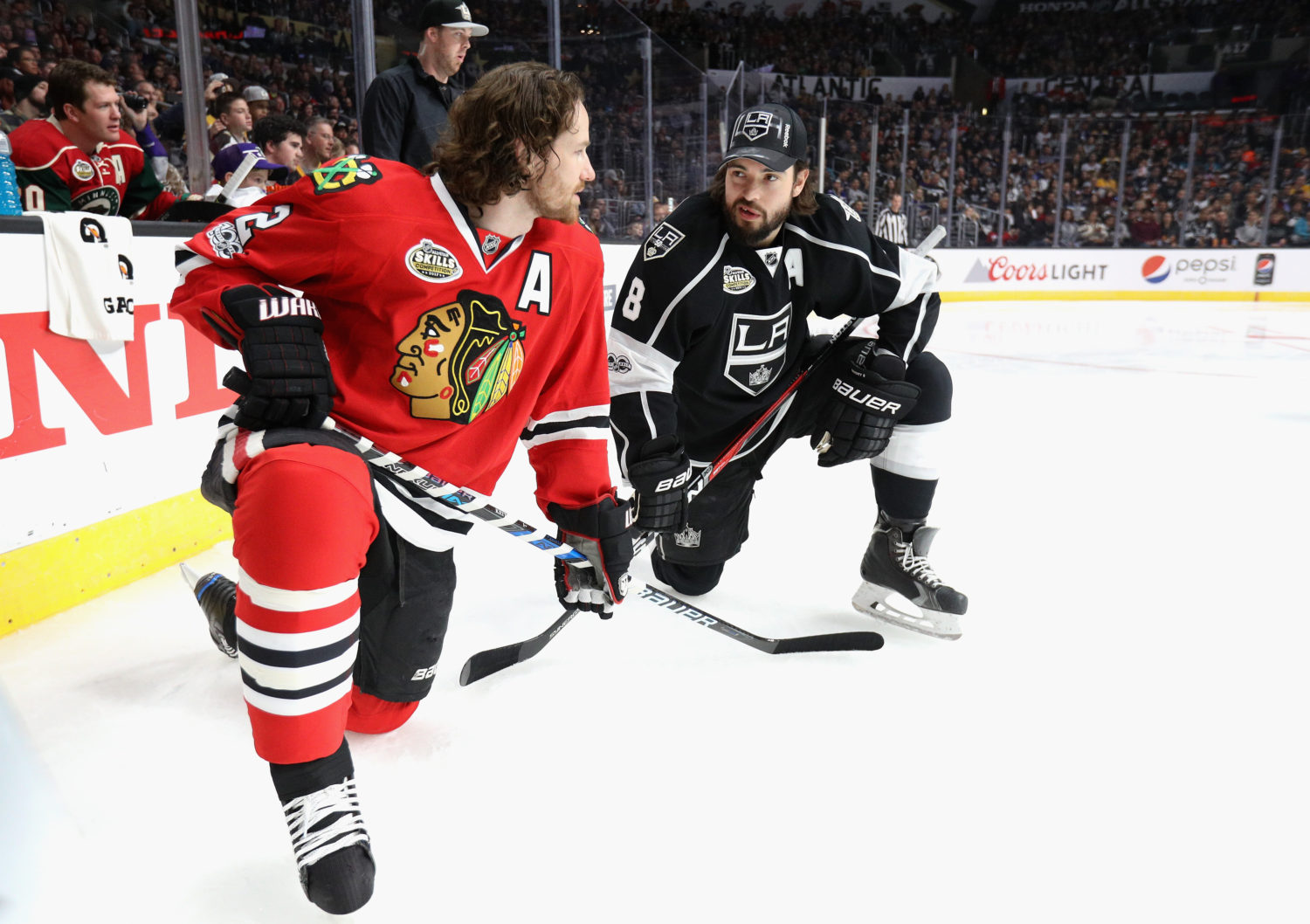