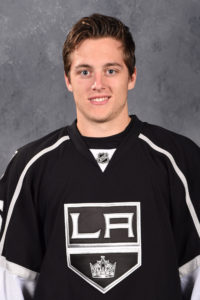 The Los Angeles Kings recalled forward Jonny Brodzinski from AHL-Ontario on Thursday. The transaction, first reported on Wednesday by LA Kings Insider off correspondence with Ontario Reign Insider, does not come with a corresponding roster move. Because there are no roster limits after the trading deadline as long as teams are salary cap compliant, no corresponding move had to be made.

From Ontario Reign Insider on March 13:

One player who seems to be getting better and better is 23-year-old right winger Jonny Brodzinski, who had a two-goal, assist night while Lombardi monitored from above. The 2013 fifth-round pick of the Kings is in the midst of a breakout season and is now the Reign’s leading point producer with 45 including a team-high 24 goals. “I’ve gotta hope and believe he’s knocking on the door,” head coach Mike Stothers said on Sunday of Brodzinski, who’s yet to earn his first NHL call-up during his second full AHL season. LA Kings Insider Jon Rosen reported in late February that a recall for Brodzinki was being strongly considered by management.

“He’s got the same thing as a lot of every young forward that’s come through here like the talent, if you look [Tanner] Pearson, [Tyler] Toffoli,” Lombardi said of Brodzinski. “Those guys who have a gift for finding the net, that’s something that’s very hard to teach. But what you find like Toffoli and Pearson had to learn, you need to develop a backup game. You need to have a game where the coach can trust you and also find ways to contribute when you’re not scoring.”

“And usually what happens with kids who’ve been scorers their whole life, they haven’t had to apply themselves in those battle areas. I don’t mean fighting, I mean taking a hit to make a play, winning loose puck battles, protecting the puck and that’s what I always, you know, one of the things that I was doing before I got here. We’ll rate each one of those situations for those kids and just like you score, well it’s not just goals and assists, it’s how many of these battles have you won and start reinforcing in their head that this is important. So Kempe was the same way and it was a number on thing that’s accentuated to the NHL coaches when it comes up, that we can’t get away from this even though the immediacy of winning is more important up top. So he’s coming along. Both those kids made tremendous progress and then like you said, they’ve got gifts you can’t teach. You say Brodzinski can score, but he actually could have had five tonight because he keeps on showing up in those areas. So, you just try and get him to learn to do all those other little things so he can use those gifts.”

Armed with a heavy shot and the ability to get up and down the quickly and efficiently, Brodzinski has been the subject of highly positive reviews from those who have seen him play, especially in the second half of the 2016-17 season.

Once he enters the lineup, Brodzinski will become the first player in franchise history to wear #76 and the first player drafted in 2013 to appear in a game with the team. Along with forward Nic Dowd and defenseman Kevin Gravel, he will become the third King on the current team to have played at St. Cloud State University. He played alongside Dowd and Gravel between 2012-14.

Brodzinski remained on the ice for extra work after Thursday’s morning skate and is not expected to make his NHL debut against Winnipeg at Staples Center tonight (7:30 p.m. / FOX Sports West / FOX Sports GO / KABC 790 / I Heart Radio). Los Angeles’ two-game home stand continues with a visit from by the New York Rangers on Saturday.