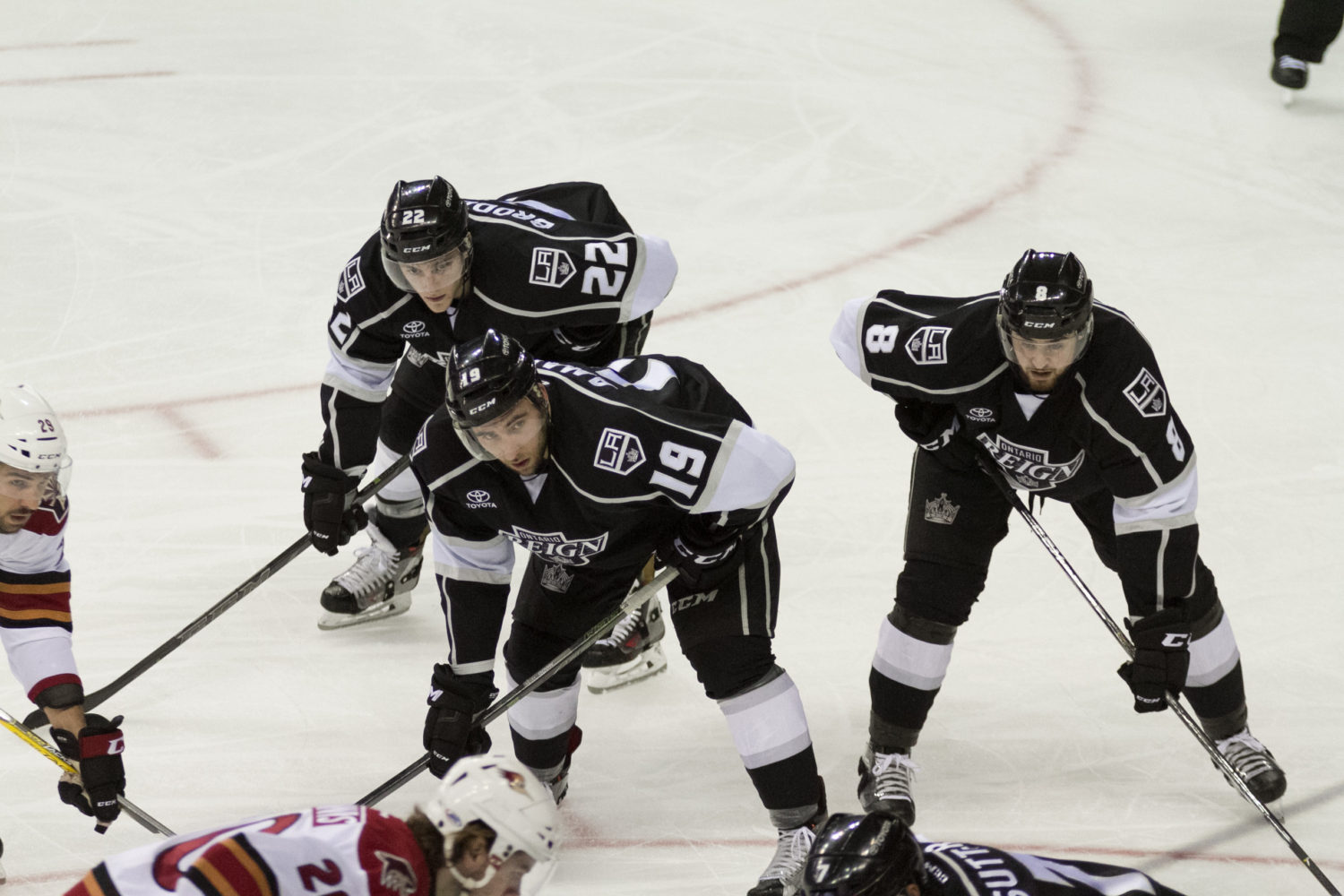 When Kings President and General Manager Dean Lombardi comes to watch the Reign, there’s of course a focus on the prospects, the next to wear Los Angeles jerseys. There’s a few he’s already plucked from Ontario dating back to this season’s training camp to present — defensemen Derek Forbort and Kevin Gravel, center Nic Dowd, and the most recent moves to recall defenseman Paul LaDue and forward Adrian Kempe.

More could be on the way to L.A. When asked if he’s still interested in bringing more players up, his simple and fast answer was, “yeah.”

“We’re still looking,” he said on Sunday in an exclusive interview with ORI. “The other thing is you don’t have the roster limits now after the trade deadline. You can play a kid but you can also put him in that environment to give him a little taste. Even just practicing with a Kopitar or Carter so you can use the call-ups now in that fashion.

“I can see us doing a few more here right now.”

Lombardi’s Sunday stroll through the doors of Citizens Business Bank Arena came at a fine time. The day after the Kings picked up a crucial 4-2 win over the Capitals, he then watched the Kings’ primary affiliate deliver a sound 5-0 pounding on the Tucson Roadrunners. While there is an eye on the “next ones” for Lombardi, there’s a lot of different layers that go into his analyzing of the Reign when he attends a game in person.

“It’s a combination obviously,” said Lombardi, when asked if he comes to watch specific players. “You look at your team, obviously the way they play, but your minor league team is kind of divided into sectors. You have guys that are clearly just entering their development stage, so they’ve got one standard. You have guys who would be hopefully should be knocking at the door, and they’ve got another standard. And then those guys that are very underestimated in your program, those veterans, not only their level of play but their attitude. So if you’re really going to have a good minor league system you also gotta make sure that guys like [Brett] Sutter and the [T.J.] Hensicks and these guys and the [Sean] Backmans, that these guys are also doing their job because they’re not only here to play, make sure this team’s competitive but also … [show them the way].”

“So, like I said, I think you look at it as a whole and then you’re evaluating each sector and then those players get placed into each area and then you’re constantly rating where they are. So you’re doing everybody ’cause the idea is you don’t make a decision on a player, a young player, until it’s either time to sign him or trade him. Until then your job is to make ’em better every day. So for people – if he’s gonna play, not play well — you look at the guys like Derek Forbort like right now. If you had gone by what people said three years ago, said he’s not even a prospect. Well now he’s a top four defenseman.

“The idea is just keeping making them better.”

One player who seems to be getting better and better is 23-year-old right winger Jonny Brodzinski, who had a two-goal, assist night while Lombardi monitored from above. The 2013 fifth-round pick of the Kings is in the midst of a breakout season and is now the Reign’s leading point producer with 45 including a team-high 24 goals. “I’ve gotta hope and believe he’s knocking on the door,” head coach Mike Stothers said on Sunday of Brodzinski, who’s yet to earn his first NHL call-up during his second full AHL season. LA Kings Insider Jon Rosen reported in late February that a recall for Brodzinki was being strongly considered by management.

“He’s got the same thing as a lot of every young forward that’s come through here like the talent, if you look [Tanner] Pearson, [Tyler] Toffoli,” Lombardi said of Brodzinski. “Those guys who have a gift for finding the net, that’s something that’s very hard to teach. But what you find like Toffoli and Pearson had to learn, you need to develop a backup game. You need to have a game where the coach can trust you and also find ways to contribute when you’re not scoring.”

“And usually what happens with kids who’ve been scorers their whole life, they haven’t had to apply themselves in those battle areas. I don’t mean fighting, I mean taking a hit to make a play, winning loose puck battles, protecting the puck and that’s what I always, you know, one of the things that I was doing before I got here. We’ll rate each one of those situations for those kids and just like you score, well it’s not just goals and assists, it’s how many of these battles have you won and start reinforcing in their head that this is important. So Kempe was the same way and it was a number on thing that’s accentuated to the NHL coaches when it comes up, that we can’t get away from this even though the immediacy of winning is more important up top. So he’s coming along. Both those kids made tremendous progress and then like you said, they’ve got gifts you can’t teach. You say Brodzinski can score, but he actually could have had five tonight because he keeps on showing up in those areas. So, you just try and get him to learn to do all those other little things so he can use those gifts.”

Lombardi’s Kings remain on the playoff bubble, three points behind St. Louis for the final wild card spot in the West. With 15 games remaining on their schedule there very well could be another name (or names) from down the road joining the roster for the final push.

Lombardi, on the Kings reaping the benefits of the move to Ontario even more so in Year 2:
I loved Manchester as a minor-league town. It was actually perfect. But it was just too far. And the ability to have our staff down here, as much as we people — our development guys, we’ve got five of them, and we were able to get in their quite a bit, we just had to. Now it’s just so much smoother. Even today, right? There’s no way I could come and see them play. We had a game last night. I can jump in the car here and get down here. It’s just easier for everybody. The thing I really like here too, seeing your fans, everybody here having Kings jerseys. That was the one thing, the only thing that bothered me about Manchester is you saw a lot of Bruins jerseys. And that’s the same thing in Providence. It’s kind of neat to be in a town where everybody — it’s great for them, too, because now they’re going to be able to say … I saw Forbort, I saw LaDue, I saw Kempe. It feeds itself but it’s good on both fronts.