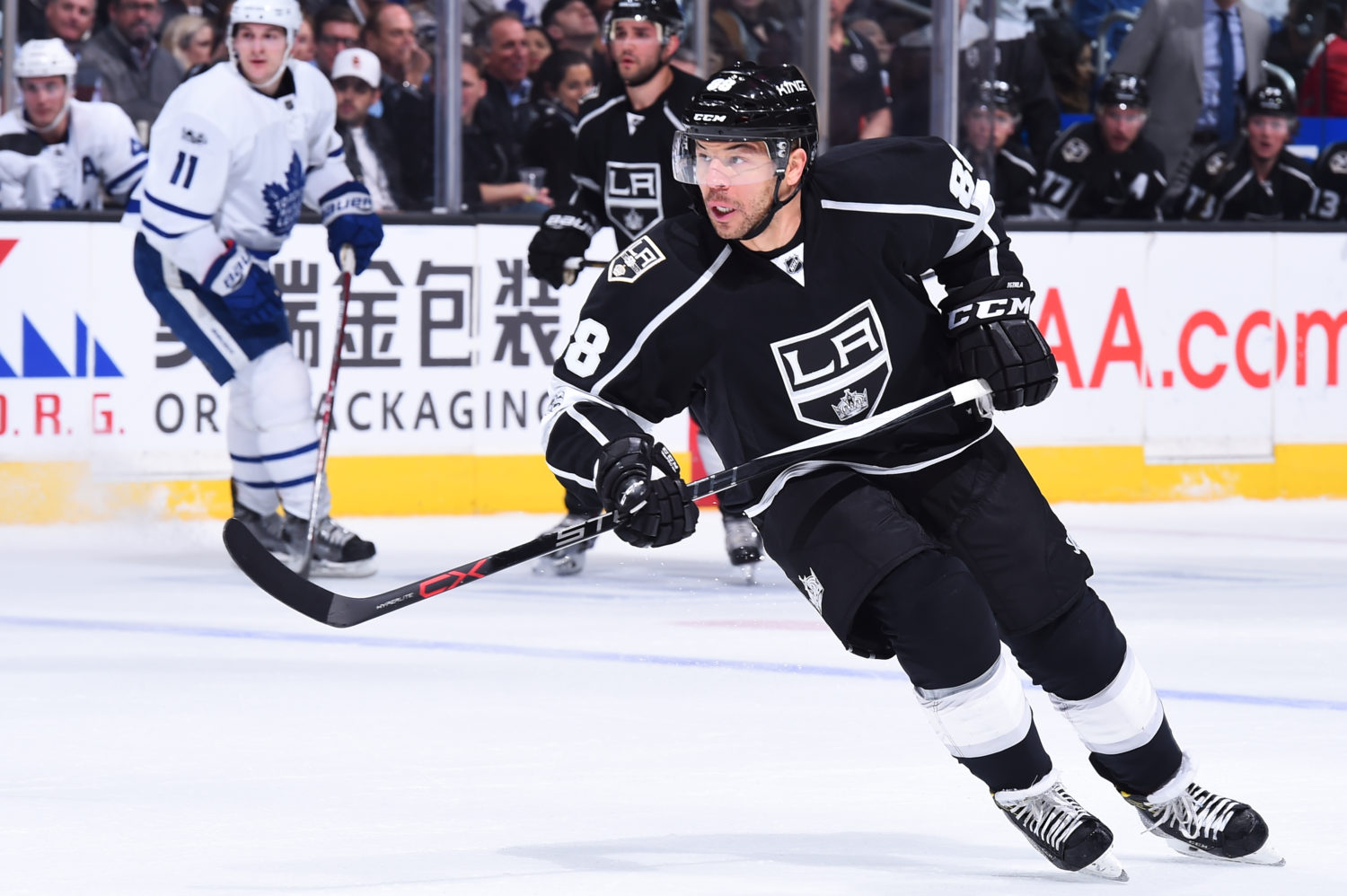 Anze Kopitar, on the mentality for the third period power play, and how it started the comeback:
Well, we knew that power play was going to be big, obviously. You’re well rested coming out of the intermission and the ice is good, so we just wanted to at the very least create some momentum, but to get the early one like that certainly helps, and I thought we were going pretty well after that.

Kopitar, on his penalty shot attempt:
If I’m completely honest with you, I missed my shot, but it went it. They all count, and I’ll take it.

Kopitar, on what has to continue if the team will solidify its playoff position:
Well, we’ve got six more games at home. Obviously this is a big home stand, and we’ve got to keep getting wins. We’ve got to keep racking up the two points. We all know it’s going to be tight in the end, so we’ve got to grab the points and as many as we can obviously grab.

Kopitar, on his goal that deflected off Nikita Zaitsev’s head:
I took the shoot and obviously I didn’t catch it quite well. I didn’t even know at first it went in, but then all the guys started to throw their hands up in the air, so I figured it went in. I’ll take ‘em. Maybe that’s the break that I needed, but I’ve got to keep going, obviously, and the team’s got to keep winning.

Kopitar, on his initial reaction to playing with Jarome Iginla:
Well, I don’t think the chemistry’s quite there yet that we wanted, but I’m sure we’re going to talk about some stuff, and obviously he’s got to get comfortable with everything. But there’s obviously some good signs out there, too.

Jarome Iginla, on his first game with the Kings:
No I mean, personally I’d like to get better and stuff but it was a fun game to be a part of and for the guys to come back there in the third down a couple. Big goal by Kopi to start it and get the energy going and we knew how important the points were, for them and for us, and to be able to come back like that. And the overtime back and forth was pretty exciting and in the shootout Quickie made some big saves so it was a fun first game and it’s amazing how — it’s just so different at first and pretty cool to be a part of.

Iginla, on what it was like to play in a game of playoff-like importance:
Yeah you could feel it being in that game. You could tell, yeah, they were battling just as we are and each point is so important and the desperation, it is fun to be part of that. You’re in to it every shift and kind of the, yeah I’d say the urgency. Just every shift is so important and battles, all the little battles both ways and stuff and the intensity so yeah, it’s been a while in those type and it’s fun to be a part of again.

Iginla, on whether he’s felt a “renewal” with the Kings:
We had a tough go there in Colorado and yeah, for a while there we knew the playoffs weren’t in the picture this year and yeah, it’s different. To be part of the games you want to be in the playoff push it’s great to be back in that excitement and wins feel good all the time but they feel so much better the more that’s on the line. Each point and stuff is going to be so important and like I said, it’s kind of a shift to shift thing. There’s no real breaks. It’s going to be tight when you’re playing all the other teams and looking at the schedule, there are teams that are right around in the standings and it should be a real fun [inaudible].

Iginla, on what he brings to the Kings:
Well, I mean, I don’t think I was good as I’d like to be tonight. I’d like to be better than I was tonight. Well I bring some experience, I think I can be good in front of the net and in the corners and I can shoot the puck, things like that. Break it right down I guess. But hopefully just find a good fit here that I can bring something that, just chip in, really. Whether it’s a big play or a big goal at some point and just to be stable on the line, too. It’s the first day, it’s an adjustment, but it was a fun game to be a part of and real happy with the way that we came back and the building was going. It was pretty cool.

Iginla, on whether it was “surreal” to put on the Kings jersey:
It is at first, yeah. Literally every time you come in here or every time you play ’em you’ve go to go in a corner with Doughty and Muzzin and McNabb and the whole D-core and then you’ve got to battle Kopi, and Carter’s flying at you and shooting and now you get to be on there — it is surreal. It is something that, within 24 hours it changes so quick but it is, in skating around in the warmup and stuff, it’s pretty cool. It’s amazing how a rink can feel so different when you’re just on the other bench, you know? I’ve played in here a lot but it feels a lot different when you’re on the other side and have a different perspective but it is cool. You can say you prepared for it, but no, it’s something that is different and it’s neat to go through and it was a great first day to be a part of it.