Bishop gets acclimated on his “syllabus” day (+ more from Lombardi)

Ben Bishop took part in his first morning skate with the Los Angeles Kings after arriving in the Twin Cities late last night and characterized the process of meeting his new coaches and teammates earlier today as “taking part in your first day of school again.”

“Go down and meet your new friends, so it’s obviously a little bit of a whirlwind but its fun, and … the hockey community’s so small and everybody’s so nice, so you kind of get to know everybody pretty quick, and I’m just looking forward to it.”

While Peter Budaj strung together excellent numbers and is as responsible as any for keeping a Kings season on track when it could have derailed under a flimsier constitution or with inconsistent goaltending, Bishop, identified by the front office as a clear cut number one who was available, and while he probably doesn’t have the ability to kick start the Kings’ offense, is still an upgrade in net and provides the team with an excellent one-two punch in goal, as Dean Lombardi noted on a conference call Sunday night.

“I think it’s probably safe to say, like I said, with going down the stretch here we feel we better have a number one in-goal every night, is probably what it comes down to,” Lombardi said. “Peter, you’re right, did a good job for us. Stopped what you’re supposed to stop. But I think, like I said, if you’re looking at these last twenty-four games, some of the things in particular I saw down the last couple weeks, we probably [wanted to] make sure we have a quote, unquote number one in there every night.”

With five back-to-backs still on the docket, including one that continues tomorrow night when Los Angeles visits Calgary for the first of four remaining games between the teams this season, the timing of this trade is a benefit to the Kings, who had been discussing particulars for several weeks as it became more clear what the Lightning’s focus would be in proximity to the trading deadline.

“I’ve been looking at something for a while. But it had to be what I consider a number one for it to make sense, and that’s just kind of the way it is,” Lombardi said. “Yeah, the problem you’ve got obviously, don’t forget that a lot of teams, until you start getting to this point, are still in the playoff hunt. You have very few teams now that are out of it by even March now, right? So, if you try and get something done a month ago, the reality is everybody’s still in the hunt and obviously that’s a very good team down there and whatever’s going on this year, but there’s no doubt that’s not a team that wouldn’t be right back on top again. So, that’s part of it too – that it takes a while for teams to decide on whether they’re buyers or sellers, so to speak. That’s just the nature of the caps and parity.”

For Bishop, he’ll join a team that is among the league leaders in scoring chances against and leads the league with a scant 25.8 shots on goal allowed per game.

“You know, the past this team’s had, a lot of experience they have, they’ve done it before, so to get traded to a team with that type of experience that knows how to win in those type of big games, it’s exciting,” Bishop said. “I’m so happy to be here, and hopefully we can go on a run here.”

Ben Bishop, on playing with Jonathan Quick, who was also drafted in the third round in 2005:
We played against each other in college out east, and obviously he’s turned into one of the best in the game, so to have both of us now, kind of a one-two punch is exciting. He’s a great guy, I’ve got to know him over the years and it should be a lot of fun. Hopefully we can go out there and win some games and, you know, have even more fun.

Bishop, on what Bill Ranford and the coaches told him during his first practice:
Just kind of, almost the do’s and don’ts. You know, what they like to do and just kind of, what is it, like when you’re in school and you have the agenda day or the syllabus day, where they kind of just lay it out there for you. So it’s more of a syllabus type of day and you just kind of learn some things that they like to do and you know, you’re not going to come in and try to change anything, and I don’t think they’re going to try to change too many things for me, so it’s just kind of feeling each other out and kind of learning each other’s tendencies and just kind of go from there.

Bishop, on playing on a team that has “a winning pedigree”:
Yeah, it’s exciting. You know, we got a little taste of it the last few years in Tampa with going to the Final and then the conference finals last year, so it’s one of those things when you get used to it you kind of expect it and you want to go far and when you go to a team like this they all expect to be in the playoffs and expect to go far, so when you have that type of mindset, it’s exciting and hopefully I can come in and just help out and get as many wins as possible down the stretch.

Bishop, on any individuals that have helped him in his career:
I think there’s a lot of them. You can’t just sit there and pick a couple. You know, this is my fourth team now, so I’ve met a lot of great people along the way that have helped me in different areas of the game and I started back when I was in St. Louis and then obviously Ottawa and Tampa and now here, so there’s been a lot of people that have helped out. There’s no way you can get this far without helping hands, so obviously it’s another chapter and looking forward to it.

Bishop, on having been traded at the deadline before, and his transition to Los Angeles:
Yeah, you know, this is the third time I’ve been traded, so you kind of learn a little bit what to expect. The hockey world, you know, is a really small community, so you go in for breakfast this morning and you already see a bunch of guys you’ve met before and you kind of know and I’m sure by the end of the week you’ll feel like you’ve been on the team all year. So that’s the good thing about the hockey world, is everybody is so inviting and so good so it’s just one of those transitions, you try not to think too much of it. You just kind of go out there and do your job and slowly get to know everybody and remember everybody’s names.

Bishop, on anything he’s noticed about the Kings system and how he’ll have to adjust:
Obviously being out east we only play them a couple times a year, but whenever you watch them on TV you obviously know that they have great defense and can play that shutdown hockey and they have some big names that can score some goals, so it’s exciting. Don’t know too much ‘cause it’s on the West coast and you don’t get to see too many games, but I’m excited to being a part of that organization now and just looking forward to getting that first game under my belt.

Bishop, on what it was like to leave a franchise that he played a big role in:
Yeah it’s definitely, you know, it’s different. I’ve been there the last four years and really kind of put some roots down and I had a feeling this was coming, but it really hasn’t hit me too much. I had about an hour and a half to pack up and get out of there, so there weren’t many goodbyes to be said, but there’s definitely a lot of people there that I’d like to thank and I’ll stay close with for a long time. And I obviously wish them nothing but the best and I’m looking forward now to this new chapter and the West Coast now.

Bishop, on whether he’ll keep his Tampa Bay mask:
No I’m going to get a new mask. Hopefully we can get it here soon and yeah. The blue and black, they don’t go together too well, but we’ll make it work. 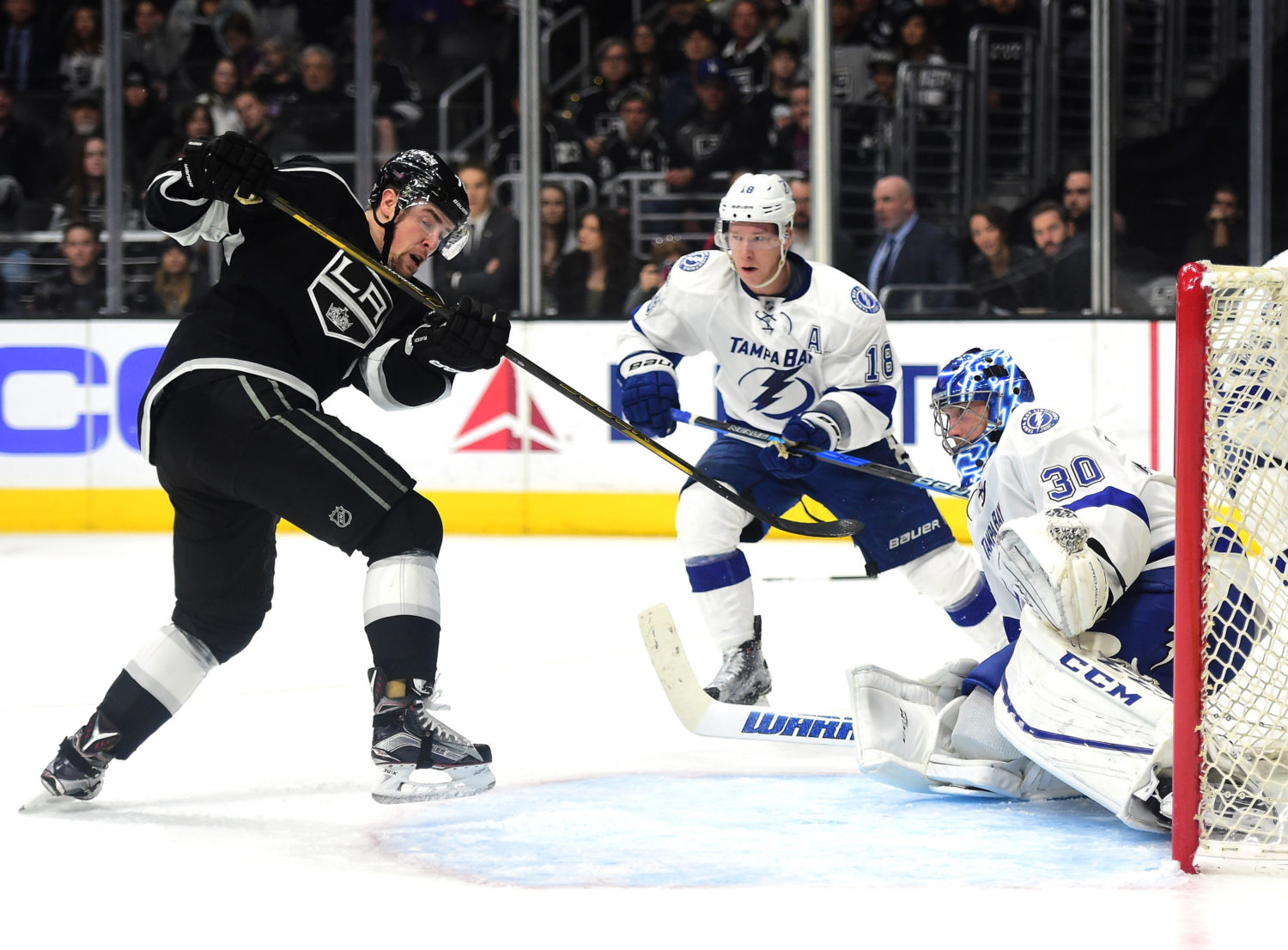