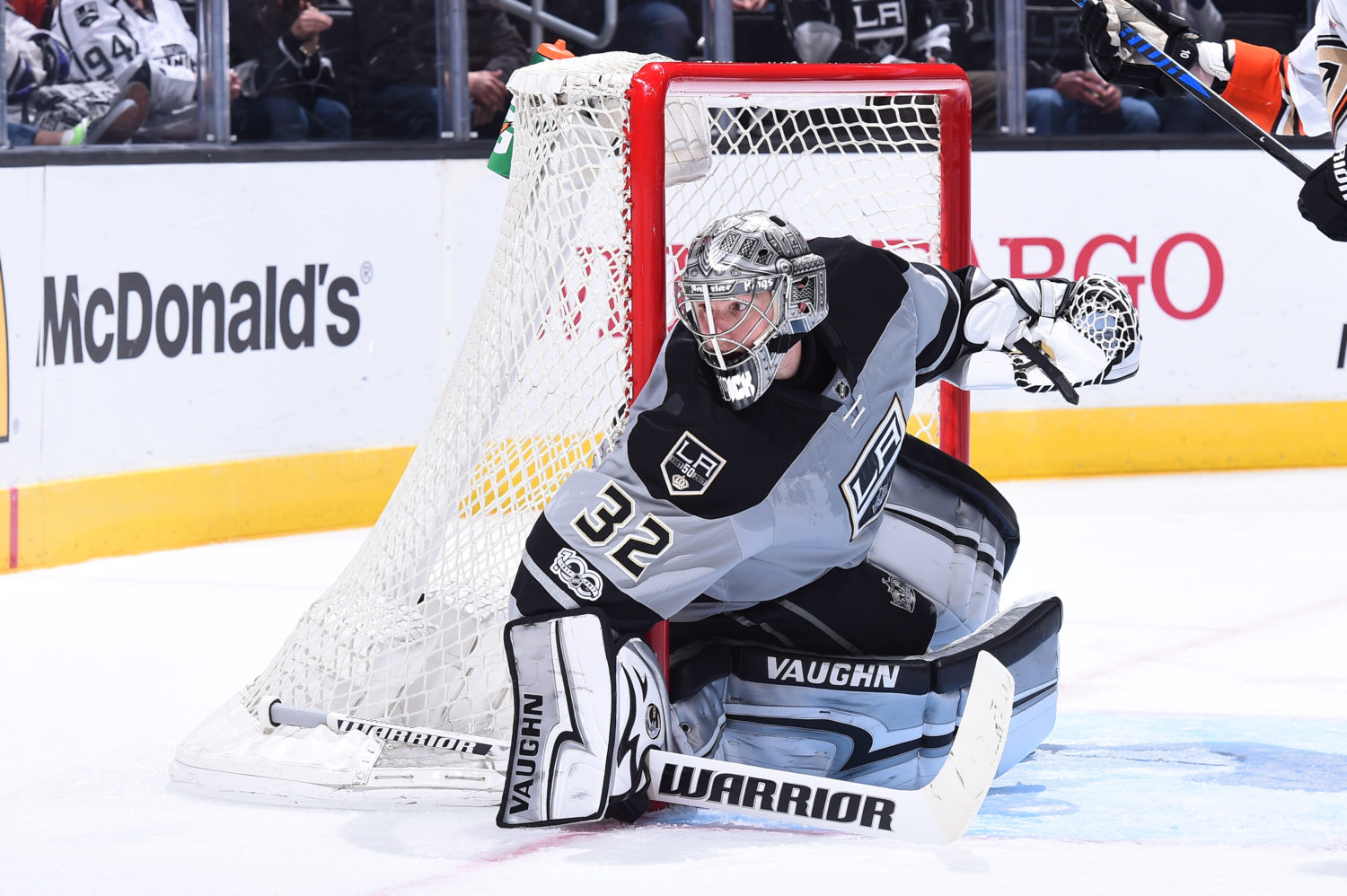 Jonathan Quick, on getting a win in his first game back from injury:
We got two points, you know, so that’s always a good feeling. So yeah it was good. Great to be in the locker room, capably and everything and be part of it.

Quick, on how he feels physically:
Yeah, everything feels good. I wouldn’t have played if I didn’t feel good.

Quick, on when he knew he’d be starting vs the Ducks:
Yesterday I think.

Quick, on whether giving up just one goal exceeded his expectations:
Yeah we won. That’s all. We found a way to win. Scored four goals, you know. You score four you should win most nights so we were able to do that.

Quick, on what he was feeling before the game:
We’ve tested it in practice. They wouldn’t have given me the green light if we didn’t try everything in practice. So I was completely comfortable with that. With the injury I had no issues at all, it was just more of not playing a game in four and a half months, whatever it was. So you’re just trying to make the saves and get a routine going and get a rhythm out there and try to help the team win.

Quick, on what it was like to have his first game back against the Ducks:
No that’s not a must win but you want to win, obviously. We played them a lot over the years, you know, we know how to handle it. They’re a great hockey team so we know what we’re getting when we play them.

Quick, on whether there’s been any talk about the frequency of his start moving forward:
We’ll figure out the next game tomorrow. Go from there.

Quick, on what he saw that led to the Kings scoring four goals in the third:
In just the period, or… I think the game kind of led to the third. I thought we were playing great leading up to it. We were creating chances, played hard, heavy and I think if we don’t play like that in the first two periods we don’t get four in the third so we got rewarded for our work over 60 minutes.

Quick, on whether he ever doubted he’d be able to play again this season:
You know obviously when you first get hurt everything runs through your mind. You start making thoughts that maybe you shouldn’t and I”m just glad it worked out that I was able to come back and play.

Quick, on being welcomed back into action with a slash by Corey Perry:
It didn’t take long, did it? [smiles]

Tyler Toffoli, on what it was like to know the Kings would have Quick in net:
Oh I mean, obviously it’s exciting having Quickie back. He’s one of the best if not the best goalie in the league so he stood on his head and made some big saves when we needed them.

Toffoli, on the mood in the locker room after the win:
Just keep winning. We need to string some games off here and a big two games here coming on the road and just keep going.

Toffoli, on whether going into the third was the type of situation where nothing needs to be said:
I think we all knew. I mean, obviously we’ve been trailing a lot lately and again tonight so getting that goal to tie us up and then getting a little more momentum kept us in the game and we pulled through.

Toffoli, on the effect Quick has on the Kings’ confidence:
Well I think the fans were more excited than the guys on the ice were. But no, obviously having Quickie, we know we can trust him. We knew we could trust Boods, too. It doesn’t really make a difference but like I said, Quickie made some huge saves for us, kept us in the game early and we stayed with it and kept getting shots and scoring some goals.

Toffoli, on the crowd going wild when Quick was announced as the starter:
Yeah, it’s been a while for that so it was pretty cool. Too bad we couldn’t have scored there first shift. That would’ve been real nice.

Toffoli, on when he knew Quick would be starting:
Before you guys. [Laughs]. Yeah, yesterday.

Toffoli, on whether he thought Quick would be “as sharp as he was”:
I mean, he wouldn’t have come back if he didn’t trust how he was feeling so I think we all had the confidence in him that he was going to be feeling good and he did his thing.