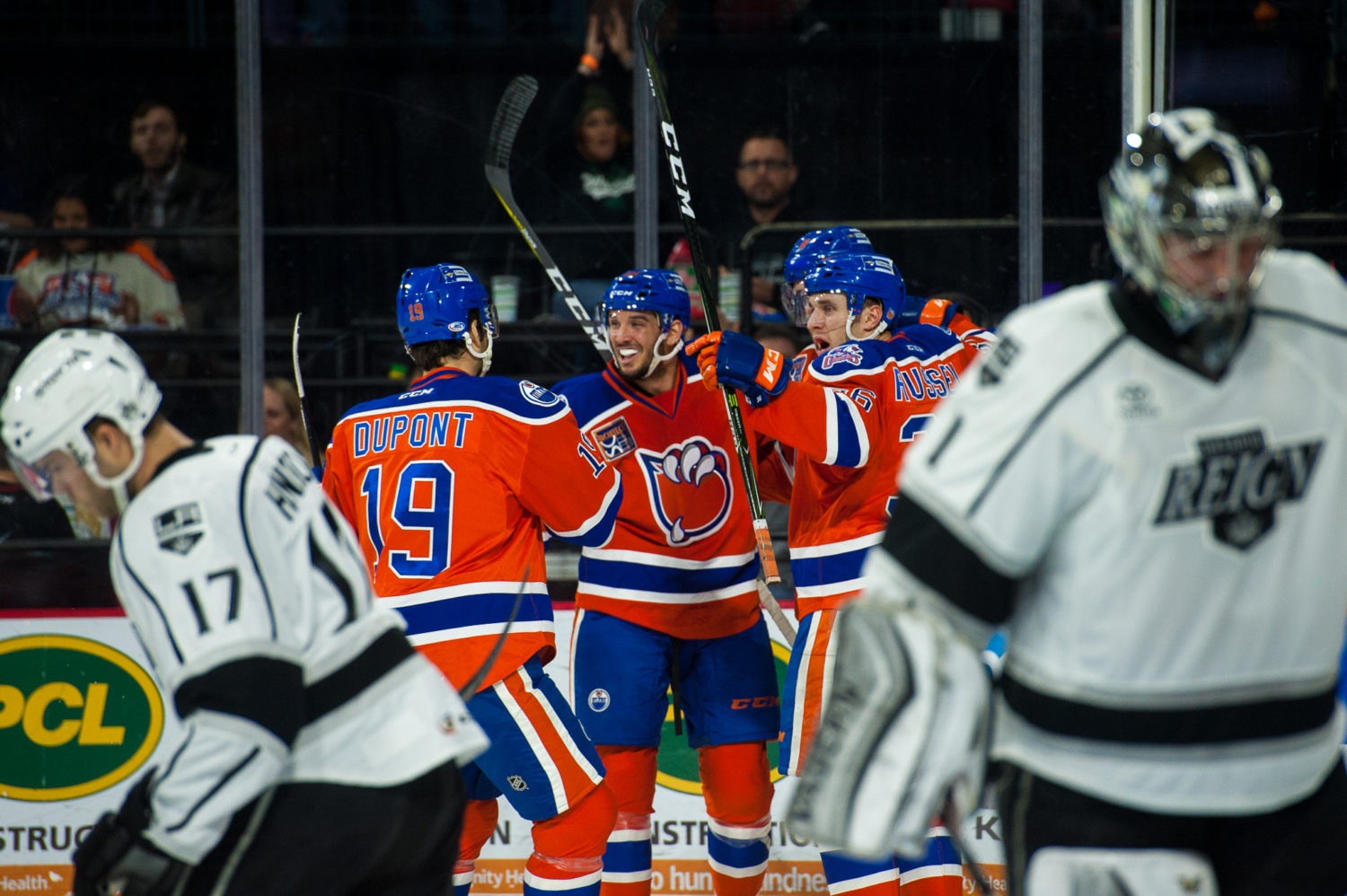 Head coach Mike Stothers, on the goals happening in a flurry:
Well, we were under siege all night. We spent too much time in our end. Shots ended up being double. I think it was 40 to 24, which I know is not mathematically double, but it is double. So, we created our own problems. Some poor decisions in our end. Some late coverage. Some chances to just get the puck out and we don’t. You know what, that’s a pretty good hockey club. So, you spend that much time in your end, stuff’s gonna happen.

Stothers, on getting players like Joel Lowry and Vincent LoVerde back in the lineup:
Yeah, we still got some guys that we need to get back. You think you score three that’s enough, but when you don’t get out of your end and you don’t cover your guys. We have five forwards who had zero shots. … Hard to believe, huh? Five forwards, no shots registered on net. [Reporter: So would the message be going forward to spread things out a little bit? Brodzinski with four, Auger with three or so.] Auger had four, Brodz had five. So there’s nine between two guys. And then five guys couldn’t register a shot.

Stothers, on how the Reign can get to the next level like they had in earlier-season winning streaks:
We had a different lineup then, too. So, you know what, but you can’t wait until these guys get back. You’ve got to make some hay while the sun shines. So, you know what, we’ll get back in the rink tomorrow and we’ll work on a few things and we’ll get ready for Sunday afternoon.

Jonny Brodzinski, on Bakersfield’s comeback:
Just a couple bounces that they got. I felt like we didn’t play a complete game tonight, I think it caught up to us in the end. Obviously they outshot us by a ton so that’s something we’re going to need to focus on coming up is now trying to get pucks deep. Kind of turned the puck over a little bit too much and that led to a lot of opportunities for them.

Brodzinski, on the goals happening in flurries:
Obviously it’s kind of nice getting a few goals back to back and then when they get a few you just have to refocus on the bench and get back after it. It just wasn’t there for us tonight.

Brodzinski, on how the Reign can get back on winning streaks:
I think just stick to our game plan. I think we’ve kind of fell of that the last couple games. Not getting pucks deep, not getting second opportunities in front of the net. Sustained pressure I think is a big thing too. They had a lot of it tonight and we didn’t have very much of it so I think we need to focus on that next game.

Brodzinski, on having LoVerde and Lowry back in the lineup:
We’re starting to get some guys back now so that’s kind of nice seeing those guys back obviously from a couple injuries. So it’s nice. Everybody got up for this game.

Joel Lowry, on his first game back:
Obviously it’s exciting to get back in there. Tough game though. We didn’t play the way we wanted to right from the start. I think we were fortunate to be up one-nothing after the first and it kind of caught up to us late in the third. Just weren’t able to come out with the win.

Lowry, on keeping emotions in check when goals are scored in quick succession:
I think you just gotta never get too high, never get too low, kind of stay even keel throughout the game just try and keep the momentum on your side and unfortunately they got some momentum at they end and they were able to capitalize on it. We came close at the end there to tie it but just couldn’t quite get one.

Lowry, on what the Reign need to do to get on a winning streak:
I think we just need to play a full sixty minutes collectively. Obviously we showed in spurts how well we can play but we weren’t able to do that for a full sixty and in this league it’s tough to do when you can’t do that.