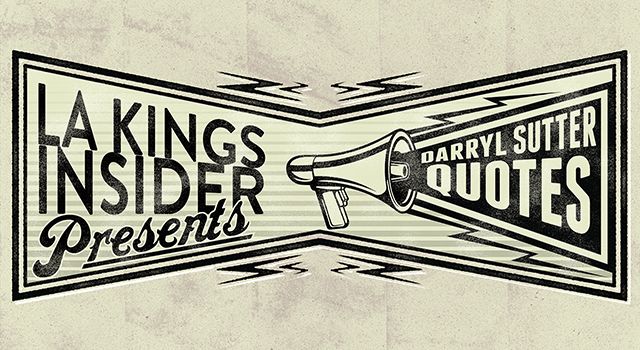 On the reason for Paul LaDue’s absence from the morning skate:
I’m not a team source for information. You get your own. [Reporter: I try to go through you more than I try to go through the other guys, too, because I think they want it to go through you first.] Well, I don’t want to run over the other dressing room and write our lineup down because that tends to be what happens, so I’m not doing it now. [Reporter: But it’s hard not to notice that LaDue’s not there.] It’s none of your business. You show up early, show up late, come to the game, see who’s in the lineup, that’s your job, not mine to disclose anything.

On the focus when top players aren’t “generating enough” scoring chances:
I think finishing more, Ralph. It’s not ‘generating.’ You break it down, I look at the last stretch of games on the road, the five-on-five part of it I’d say, going back to Philly, we didn’t score an even strength goal. Washington we didn’t score an even strength goal. Who’d we play after them? Tampa. We didn’t score an even strength goal. Florida, I think we scored three or four even strength goals, and then in Anaheim the other day we didn’t score an even strength goal. On the road, you’ve got to get away from it. If it’s top guys, then they’re probably absorbing some checking or a match-up, that sort of thing, and they have to be able to play through that. [Reporter: What type of drills do you have, whether in practice or a morning skate, to try and facilitate burying the puck? To enhance scoring a goal, as you just mentioned.] Most guys go out early and shoot in the empty net, yeah. [Reporter: But there are no actual drills if the team – I’m not about this stretch, but in general-] Yeah, we’ve got a book that’s as big as the Webster’s Dictionary. [Reporter: What did you do when you were playing if you felt like you needed a little sharpness? Was there something you did extra?] Yeah, I would assume I took a pail of pucks out there and shot pucks. In fact, I know that, or I stood around the net and just flipped pucks, things like that. [Reporter: It’s like one of those things, though. All you can do is just keep shooting. Like golf, just keep working on your stroke.] Well, first off, you have to have the ability to do it. Not everybody does That’s why some guys play on top lines. You know what? There’s a big difference in what is the assumption – I really don’t know what the question is. If the assumption is that everybody’s going to bat .300, well, they’re not.

On playing against the Colorado Rockies in Denver:
Not this building. [Reporter: Obviously not in this building, but the old building?] Yep. Before they were the – yeah, they were the Rockies. Before they went to New Jersey. [Reporter: Was that Kansas City before they came here – the Rockies?] What was that franchise? They were green, their jerseys are the same as their jerseys now. I remember that. I can’t remember who the hell they were. It would’ve been the year after the WHA. [Reporter: Before they became the Rockies, you mean?] No, that’s what they were. The Colorado Rockies. They wore those white and red. No, maybe they wore green when they went to Jersey. I can’t remember.