The Los Angeles Kings’ inconsistency in finding the back of the net has been well-chronicled. They rank tied for 23rd in goals for per game and 26th in team shooting percentage, and have only two players who’ve cracked double digits in the goal column.

Keeping the puck out of their own net hasn’t been a challenge this season. For anyone who has followed Kings hockey for the last seven years, this isn’t exactly cracking the riddle of the Rosetta Stone. Their possession rates portray a game of keep-away in which the opposition isn’t exactly setting up base camp in the offensive zone.

The opposition’s lack of opportunity corresponds with notes and observations I’ve heard from those in hockey operations, including several times from Dean Lombardi. Lombardi joined Sportsnet 590 The Fan last week and shared what he has seen himself and learned from the coaching staff.

“We’re on a pace now defensively where our chances against, they’re just a little higher than the year we first won the Cup, and we had outstanding numbers there,” he told Hockey Central. “So when I look at what we’ve been able to accomplish here, it’s clearly a team-type stat, and it’s going to be a battle.”

That “team-type stat” is also representative of the staff’s belief that the success the team has generated in limiting goals against is tied more closely to the number of chances yielded, and not as much to profound individual success from Peter Budaj.

The team still struggles at times in defending against the rush, as many teams do. But Derek Forbort was singled out for praise from Bill Ranford for his ability to defend against rush opportunities, and the mobility inherent in the skill sets of Forbort and Kevin Gravel could be one reason why the defense has benefited from getting to pucks quicker, which Ranford credited as a part of the team’s success in limiting chances against. According to Lombardi, the Kings’ scoring chances against have crept up every season since their first Cup year since falling between 2015-16 and 2016-17.

It’s interesting – the Kings lost a pair of games by an aggregate 10-0 count last week, but Darryl Sutter was happy with the number of scoring opportunities generated and ceded in the back-to-back losses to Washington and Tampa Bay.

“First goal makes a big difference,” he said earlier today. “It’s a tough league to come from behind in. It doesn’t matter. You do it once in a while and you go ‘oh, Jeez, great comeback.’”

Earlier today, Sutter spoke about how the team compiles scoring chances and what he has gained from this season’s data. He also spoke about Los Angeles’ penalty killing streak, which reached 26 games following the 6-3 win at Florida last Thursday.

Darryl Sutter, on why the Kings’ scoring chances against have come down since last season:
I don’t really do it on an over-the-year thing. We base it more on opponent or trip or back-to-backs or situations more than anything. [Reporter: That’s not different from last year’s, I would imagine, the way that you broke it down? I’m just trying to figure out a reason. I hear it from Dean, and I look at our notes, year-over-year, and talking to Billy and to Dean, that there had been a crescendo up, and then this year it’s come down. You go into the year, you have to replace several defensemen. There are younger defensemen. The goaltender obviously goes down in the first game of the season. I’m just trying to figure out the reason, perhaps if you were to look at it year-over-year, why the team has had better success this year.] We try and make adjustments, we try and win the Jennings every year. We came within two or three games of doing it last year. It’s logical at the end of the year to try and set your goals higher and try to do things in the room that nobody needs to know about or we try and do differently. Obviously there’s a lot of personnel changes. [Reporter: You obviously come from a very good base to begin with. The way the team plays, you don’t give up very much to begin with.] Well, it’s important, it’s how you win championships. It’s not like we give up secrets or style of play or anything that that. [Reporter: Would it be fair to say without Quick, as players, do you think there’s a heightened awareness?] He’s a different style of goalie. I’ve said it, I’m on record of saying it, for me, Jonathan Quick is the best player in the world right around the net – steering and clearing pucks – which made it easier for our defense. So if there’s an adjustment, maybe there was an adjustment for our defense, but I think clearly our goal was to win the Jennings last year. We were within one game of doing it. So if there was a way to cut down a handful of scoring chances a game, it doesn’t take anything away from anything else. At the end of the day, high shot volume is still the best for, and less against. It’s still the best recipe for success. It doesn’t matter. As coaches, we don’t control personnel, but we control how personnel plays.

Sutter, on personnel and systems play’s impact in penalty killing:
We’ve had to make some changes in our penalty killing for sure, from last year. First off, it’s a volume thing, too, in terms of where you’re giving them the puck from where, what you’re trying to get accomplished more in your own zone or less time in your own zone. I’ve made some adjustments in that. It’s an ebb-and-flow, penalty killing. Again, I go down to base it on your opponent and things like that. Phoenix and L.A. tend to have special teams games, and if you looked at the first game we played up there this year, I think there were almost 18 minutes or something in power plays for both teams, and we had a five-on-three, and they scored on the first shift of the game on a weak power play goal. They scored two power play goals against us that game. Last game we only took one penalty up there, so you know what? If they take three, we score on one that wins it, so special teams against [Arizona], for whatever reason, if it’s a division thing or whatever it is, it always seems to have a big play.

Sutter, on not having played many games against the Pacific Division:
No. We have 15 left. [Reporter: That’s a good thing, right?] Yeah, I think so. First off, other than the travel part of it because Calgary, they take advantage of it, those two teams. If you look at what we have on our schedule with them, it’s an advantage to Edmonton and Calgary. [Reporter: But in terms of playoff stuff, it’s lined up for you.] It’s relevant. I mean, it should be more relevant. That’s why I don’t like talking about that stuff. It should be more relevant, divisional games. Unbalanced schedule, 29 games, it’s not a relevant thing. You look at it last year. The team that had the best record in the league gets beat out by the team that wins the Stanley Cup. They shouldn’t have to play them until [later]. 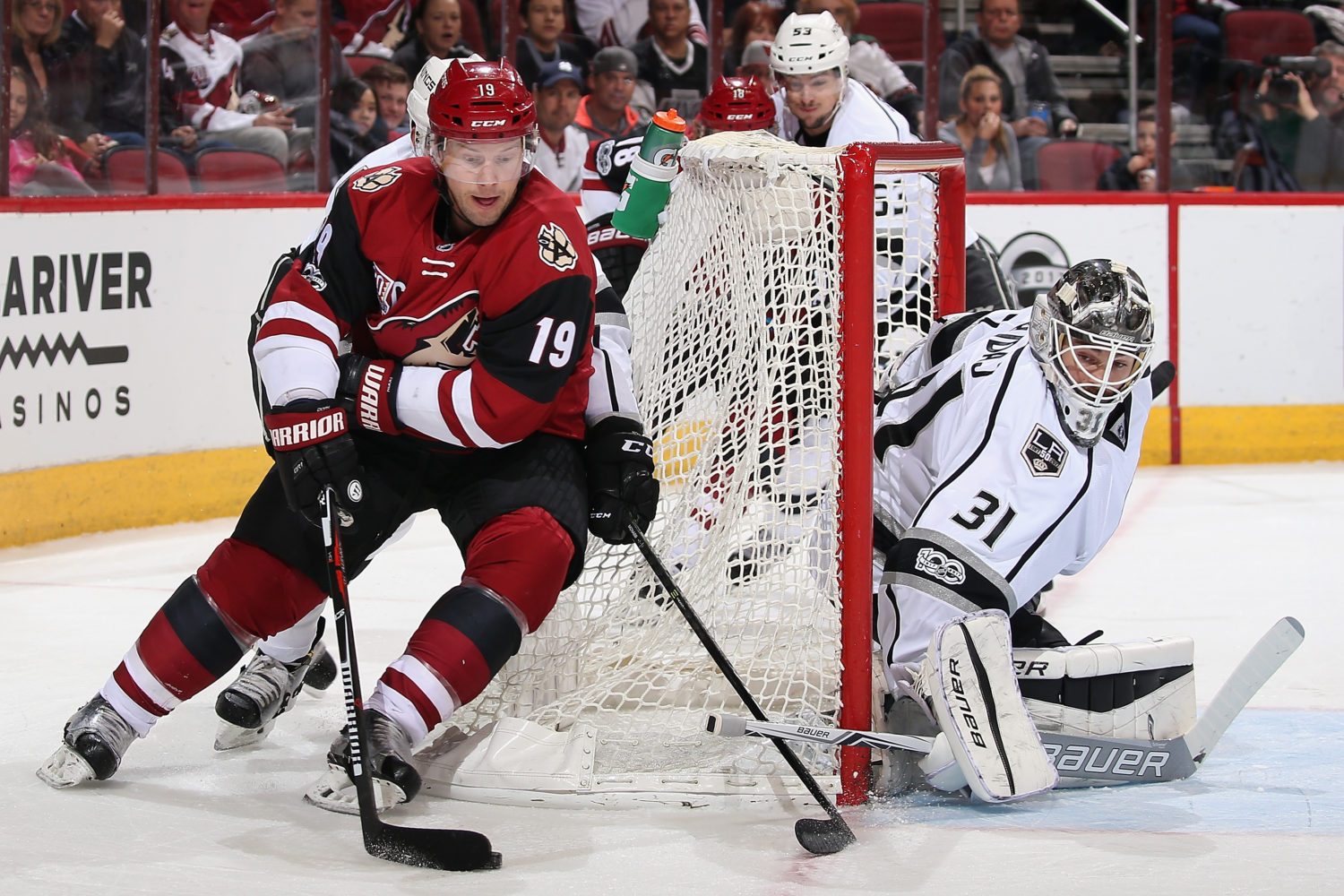