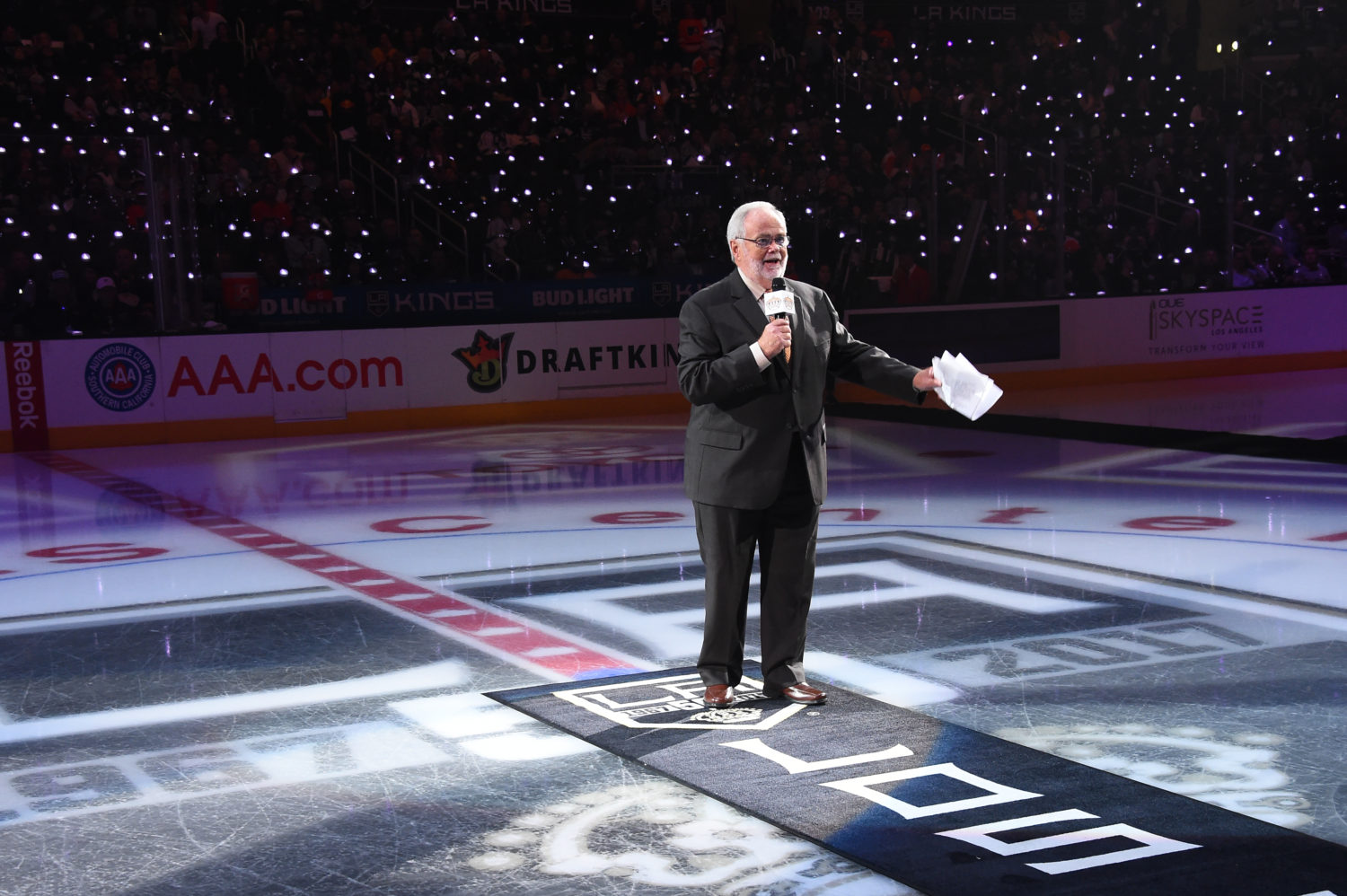 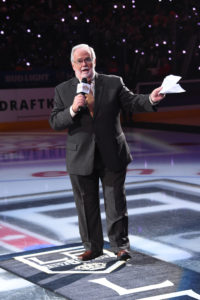 Jiggs McDonald, the first broadcaster in franchise history, returns to the airwaves to call his final Los Angeles Kings game tonight (4:30 p.m. PT / FOX Sports West / FOX Sports GO / KABC 790 / I Heart Radio) at the twilight of a storied broadcasting career that earned him the 1990 Foster Hewitt Memorial Award and a place in the Hockey Hall of Fame.

John Kenneth McDonald, hired by former owner Jack Kent Cooke prior to the team’s inaugural season based in part because of a shared nickname with a comic strip character, broadcast the first five seasons of Kings hockey before a disagreement with Cooke over wages and what McDonald believed was a fair working salary led to the evolution of a career journey that also took him to the Atlanta Flames, New York Islanders and Toronto Maple Leafs. He retired in 2004, but has filled in on Islanders and Florida Panthers broadcasts since then and has called at least one game in each of the last 50 seasons, a remarkable streak that extended when he broadcast the Islanders’ game against the Panthers on January 11.

There are legendary stories of Cooke’s managerial style and cost management, though in speaking with McDonald over recent seasons, the five-year Southern California span bridging his late 20’s and early 30’s has been referenced with reverence and appreciation. On Thursday, he called it his “five-year college education.”

Earlier today, McDonald spoke with LA Kings Insider about returning to call one final Kings game in the team’s 50th anniversary, and the work that has bookended his renowned career. 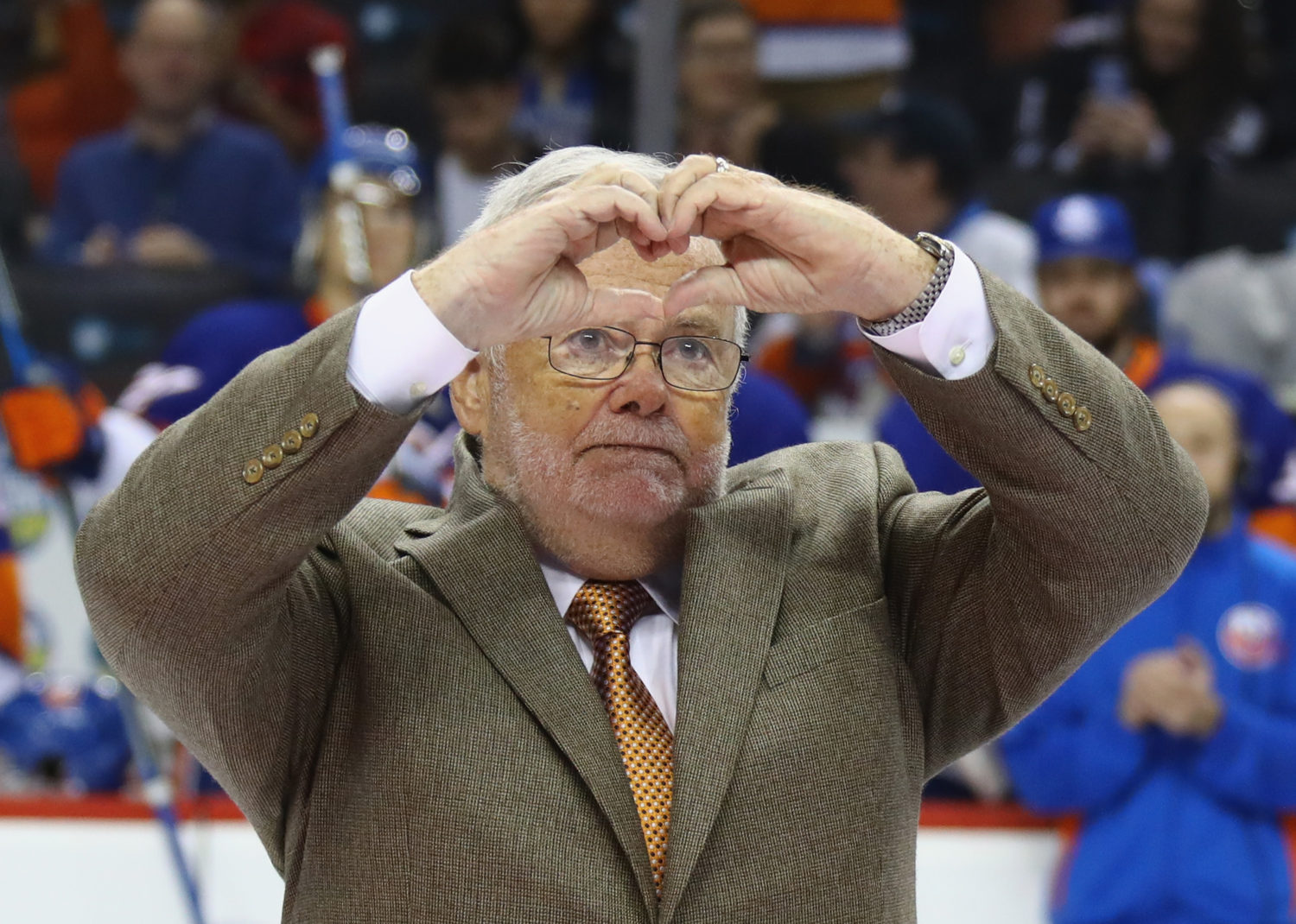 LA Kings Insider: Looking back over the summer when the Kings approached you to broadcast this game today, what was the reaction? Was it an immediate ‘yes, I would love to,’ or did you have to think about it?

Jiggs McDonald: I didn’t have to think about it for one second. Actually, I put the feeler out there, said ‘What would you think if…?’ And hadn’t until probably the beginning of the season that Bob wasn’t traveling to the East and I thought, ‘Gee, here’s a chance maybe to be part of the 50th celebration.’ Maybe just oil up the pipes and try one more Kings’ game and here we are. They were very accommodating. The response was immediate. ‘Yes, let’s do that. We’ll get back to you to figure out a game, somewhere close to you. Can you go to Carolina? Can you go…?’ ‘I can go anywhere. Wherever you need me, Jon, I’ll be there.’

LAKI: With that in mind, too, and this celebration of the 50th anniversary, coming back to Los Angeles at the start of the season, too – what does that mean to you that this organization is now thriving in its 50th season?

JMD: Well to have been included in the celebration that opening weekend was so special just to be put in the same category as the players, the trainers, everybody that was involved. Not all of us get to work for a team, as you know, and it’s special to be accepted and to be a part of the team. Coming back that weekend was fantastic. I couldn’t believe the response, the number of people who had great memories of those first five years at the Forum, of that first team. Whether it be the games at the Sports Arena or the games that were played down in Long Beach, some of the memories of the building open and just the people who were around, who remembered the guys that were there, the guys who played in that ’67 season.

LAKI: 1968 was a tumultuous year. Without trying to get too political, were there any overarching larger stories in what was happening in the country, or was Los Angeles kind of separate from that?

JMD: I think LA was separate from that. I don’t recall any major concerns. The only concerns that the players, and not necessarily the players, but their wives seemed to have was the possibility of an earthquake. You know, the big one was always projected and at the end of that, I believe it was the ’68 season, a lot of the wives and families had already left before the season ended and I remember, too, vividly, the last home game of the ’69 or ’70 season, missing the playoffs, and the number of cars with U-Haul trailers hitched to them in the parking lot. The guys were out of there in a hurry. Not a very happy management staff at that time but they weren’t going to stay around, and of course we didn’t have exit interviews like we have now and have end of the season get-togethers, what have you. But no the earthquake was probably uppermost on the minds of everyone than any political turmoil or whatever.

LAKI: Some of those early seasons were tough years for the organization. What were the players like? Was there ever the thought that what is happening, ‘is this sustainable?’ How did you go through those years when the team wasn’t as competitive?

JMD: You know the biggest problem, when Red Kelly left and Hal Laycoe came in [in 1969], Hal introduced a system, defense first. A lot of that being is played in the NHL even today, but the players rebelled. Even at training camp, guys didn’t like the system. Guys would just nod and say, ‘Yeah, we’ll do it that way,’ and then wouldn’t. And Hal would get upset and they were upset with him, they had a lot of different nicknames for the coach at that time. So, 24, 36 games in to the season he’s gone. Johnny Wilson comes in. Johnny was a little more laid back. Doug Harvey came with him as the assistant coach and it was almost a country club atmosphere. Instead of a hardcore, drive-drive-drive, it was very laid back. And then, well in the five years I was there, five different coaches. Larry Regan takes over, Johnny Wilson decided that he wasn’t going to be around for another season. He’d had enough went back to, well actually I guess at that time he went to the college ranks, to coach there. Freddy Glover came in, Larry Regan handled himself for a little while, then comes ’72 and Pulford. Bob takes over after having an outstanding playing career and stability. Stability, we just didn’t have that stability other than the two years with Red. 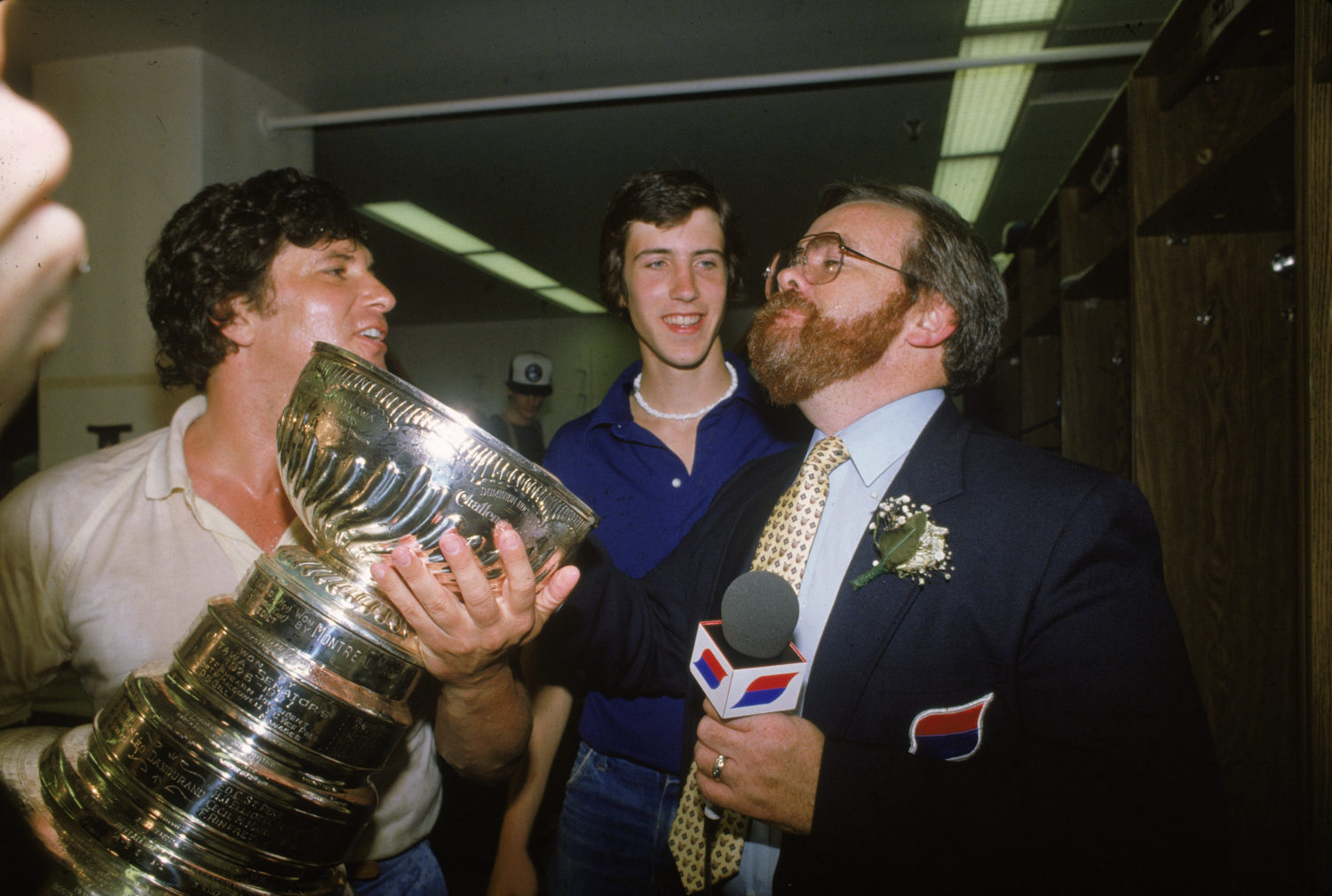 JMD: The emotions are butterflies, being nervous. Wanting to make sure I’m prepped, you know, players, lines, stats. Stats you can do anything once as you know but the ability to do it on the fly and this is one of those arenas where the broadcast booth is a long ways from the ice surface so, you know, just how are the old peepers? [laughs] But yeah, whether it’s the last, there’s no preparation for it being the last. I’ve retired I don’t know how many times now, Jon. I thought I was finished 2004 at the end of the season here, came back to do some Islanders, some Panthers involved as well, and now this is so special. Going back to training camp ’67, the first games were on radio. I believe I’m correct in saying that the 1967-68 season in Los Angeles there were 20 games on TV, all of them simulcast of course. This is the ultimate, sure, no question.

LAKI: What is it that you have most enjoyed in your career about calling a live event, a live hockey game?

JMD: Radio comes to mind immediately. I harp back to something that Vin Scully said the first time I met him. He envisioned the job, or our job, what we do, as picking up the fan, and this of course relates to Los Angeles and in his case bringing them to Dodger Stadium to Chavez Ravine and knowing if there was a backup on any of the freeways or whatever. Might take you a little longer to get here but his job, he envisioned, was bringing you from home to the ballgame, entertaining you, informing you, and sending you on your way. And that’s how I’ve approached it. I’ve said many, many times, in my opinion, I work for the fans. Yes, I’ve accepted paychecks from various outlets, teams and what have you, but I work for the fan. If what I do doesn’t satisfy the fan in any way, shape or form, then it’s time for me to find another job. But that’s the key. Informing, entertaining.

JR: What has Bob been like? What has Bob spoken to you about, if we could be privy to that, over this past year or heading in to tonight’s game?

JMD: I told Bob that I had the Bob Miller suite at the hotel and that the number of phone calls and this kind of thing, and he said, ‘Well, if you have the suite, you’re probably lucky to be able to turn around in it.’ [laughs] You know, typical Bob humor. We’ve been friends since the day he got the job. I’ve admired Bob’s work, his body of work, what he has done over the years, his ability to adjust to those early years with Mr. Cooke and then beyond, the different ownerships, the coaching changes, management changes that he’s gone through. To be able to maintain that sense of humor and outlook on life, and God bless Judy for putting up with him, too. No, he’s just one of the great human beings in this sport. And as Wayne Gretzky always says, this game is about the people you meet. And we have some of the greatest people in the world in this game and that’s Bob Miller right there.